A roughly 2000-year-old mummified man of the Ansilta culture, from the Andes of San Juan, Argentina, had lice eggs and cement in his hair which preserved his own DNA
Universidad Nacional de San Juan

A California City Is Overrun by Crows. Could a Laser Be the Answer?

Anyone who has ever peered through a magnifying glass and struggled to pick nits knows how effectively female head lice cement each of their eggs to a human hair. Once these pests gain a foothold they are notoriously difficult to dislodge. But even a school nurse might be shocked at their real staying power; scientists have previously found louse eggs still stubbornly stuck to ancient hair after 10,000 years.

And now, researchers have discovered something even more remarkable about the glue lice use to adhere eggs to hair. Invertebrate biologist Alejandra Perotti and her team found that lice cement turns out to be exceptional at trapping and preserving anything it encases—including high-quality ancient human DNA from the lice’s hosts. Their study, published this week in Molecular Biology and Evolution, was a case of life imitating art. It played out a bit like the scene in Jurassic Park, in which dinosaur DNA was preserved by mosquitoes that had sucked dinosaur blood before subsequently becoming sealed in amber.

In this case, female lice had secreted cement from glands in their reproductive organs to affix eggs, called nits, to the hair of ancient humans—who later became 1,500 to 2,000-year-old mummies in Argentina’s Andes Mountains. In doing so, the lice trapped skin cells from the human scalps in their cement. Perotti and colleagues sequenced genomes from the skin cells to discover that these ancient inhabitants originally came from rainforests in southern Venezuela and Colombia. What’s more, they found that DNA in the glue was kept at quality similar to that typically retrieved from teeth, and superior to that of other common sources like the skull’s dense petrous bone. That means examples of ancient hair, clothes and other textiles around the world, with their ubiquitous lice, could end up yielding priceless DNA that identifies their human hosts even if their remains have vanished.

“If you have hair, or if you have clothing, you can find nits attached,” says Perotti, of the University of Reading. “We can study thousands of years of the hosts’, and lice’s, natural and evolutionary history just by examining the DNA trapped in the cement.”

Team members from five different universities are studying South American mummies to learn more about when and how the continent was populated. The two mummies yielding lice for this research were interred some two thousand years ago in the Calingasta Caves and rock shelters of the high Andes Mountains of today’s San Juan province in Central West Argentina. In this cold, arid region where even the valleys soar to heights of nearly 10,000 feet, the mummies were exceptionally preserved along with the ectoparasites that shared their lives.

Perotti and colleagues suspected that DNA might exist in the sheath of cement that was used to glue each nit to a strand of hair on the mummies. Using a dye that binds to DNA, and special imaging techniques, they revealed that the nuclei of human cells were in fact trapped and preserved in the louse cement. Then they inserted a tube and extracted that DNA for sampling.

The DNA showed genetic links between these mummies and individuals who lived in Amazonia 2,000 years ago. The evidence demonstrated that the mountain inhabitants of the area, the Ansilta culture, had formerly come from the rainforest regions in what is now southern Venezuela and Colombia. Such information helps to recreate South American prehistory, which is particularly complicated in Argentina where many indigenous groups were eradicated, assimilated or deported centuries ago.

To confirm their findings, the team also analyzed DNA from the nits themselves and compared it other known louse populations. They found that the parasites’ migration history mirrored that of their human hosts from the Amazon to the Andes.

“All the nits we analyzed gave the same origin,” Perotti says. “That was very interesting. Totally independent of the DNA of the host, it gave us the same evolutionary history.” 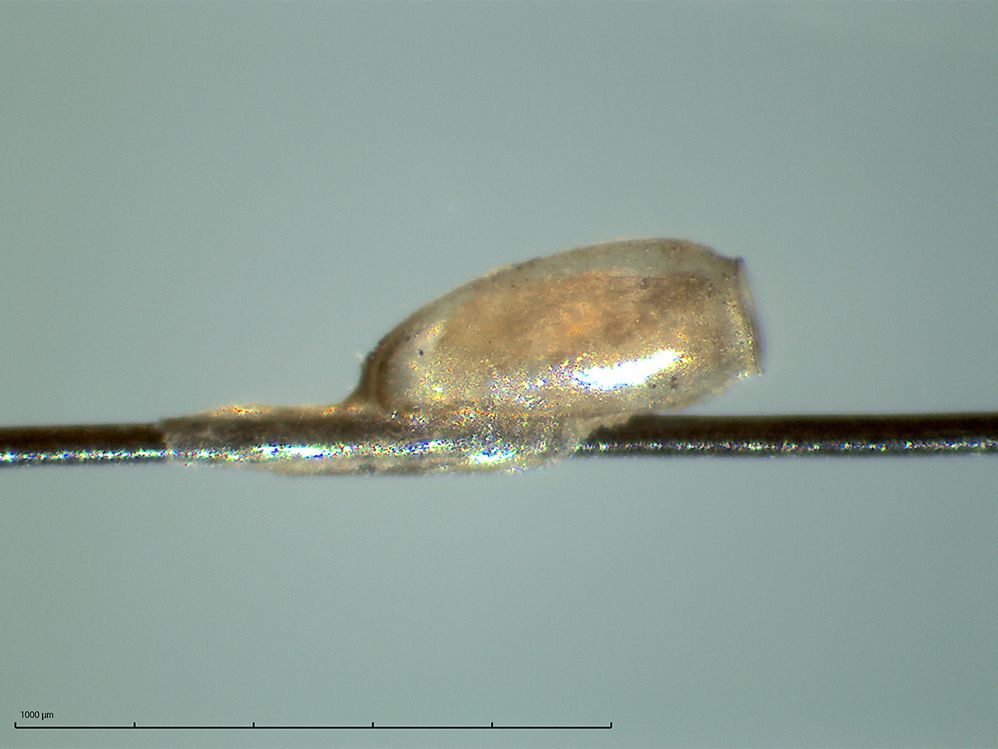 A human hair with a nit attached to it by lice cement.

Because louse cement preserves anything it encases, the team also found sources of environmental DNA that were neither human nor louse. Along with various strains of bacteria they found the earliest evidence of Merkel cell Polymavirus. The virus, discovered in 2008, can cause skin cancer and the researchers now speculate that head lice might play some role in its spread.

The team also examined the nits’ morphology and attachment for information about their hosts’ lives. For example, lice lay eggs closer to the warmth of the scalp in colder environments and the position of these nits, nearly on the mummies’ scalps, suggested that the ancient humans were exposed to extreme cold temperatures which might have played a role in their deaths.

“This work is remarkable on several levels,” says David Reed a biologist at the Florida Museum of Natural History who was not involved with the study. “First, the authors were able to sequence the genome from such a small and seemingly insignificant starting material, and second the lice upon these heads contributed to our understanding of human migrations.”

Plenty of evidence demonstrates that our ancestors lived with lice for many millions of years. But scientists are only now delving into lice genomes to uncover how the parasites moved, spread and evolved along with their primate, and later human, hosts, around the world.

“Human lice have taught us so much about our history, from contact with archaic hominids to when humans started wearing clothing,” Reed says. “It seems that lice still have more to say about our history.”

Investigations of mummies and archaeological sites confirm that many ancient groups supported sizable populations of both head and clothing lice, which can still be found among their remains and artifacts of many types. Scientists have even discovered specialized combs that prehistoric South Americans employed to try and rid themselves of the pests. Luckily for today’s scientists, those efforts often failed.

Museum and private collections are filled with lice, scattered among hair, textiles and clothing. Many of these archaeological materials are now entirely out of context, gathered generations ago from unknown sites and not linked to particular places or times. But the nits that endure on these artifacts even long after their human hosts have faded into oblivion are now a newly discovered resource for learning much more about their ancient owners.

“The beauty of gathering info from nits is that they are preserved for thousands of years, attached to hair or clothing,” Perotti says. “And now we can link them directly to a specific person.”

SEC teams set to get busy in bowl games

A California City Is Overrun by Crows. Could a Laser Be the Answer?

Who Were the Denisovans? | Discover Magazine

Three products that could transform Apple in 2022