Jameson Williams’ transfer to Alabama working on all fronts

He nearly matched those numbers in multiple individual games during his unpredictable breakout season that only Williams and immediate family members could have seen coming.

With the Buckeyes, he was an afterthought, held back by a loaded receiving corps. At Alabama, he’s been essential, a much-needed addition following the departures to the NFL of Jaylen Waddle and DeVonta Smith. And now he’s become an intriguing NFL draft prospect.

“I would say this is something I envisioned, because I had plans — big plans — of doing what I did [this year],” the speedy Williams said matter-of-factly over Zoom on Tuesday as the Crimson Tide continued preparations for the Cotton Bowl. “That’s been things I wanted to do since I was a child, dreams I’ve had since I was growing up, playing college football on the biggest stage.”

Now that John Metchie III is out due to a torn ACL, there may not be a more important player in Friday’s College Football Playoff semifinal against Cincinnati at AT&T Stadium. Alabama offensive coordinator Bill O’Brien singled out a number of receivers who have shown flashes since Metchie went down in the SEC title game, such as Ja’Corey Brooks, JoJo Earle and Agiye Hall. But, as O’Brien said, the Crimson Tide can’t just replace Metchie, their receptions leader.

“It’s not easy,” O’Brien said. “He’s a hundred-catch guy. He can do so many different things for us. … So his presence in the room is missed.”

It could mean even more responsibility for the game-breaking Williams, who is fifth in the nation in yards per catch at 21.3 and enters the showdown with 15 touchdown receptions and 1,445 yards through the air. From his arrival at Alabama, he impressed quarterback Bryce Young with his workmanlike mindset and attention to detail. He quickly learned the playbook and communicated well with his teammates and coaches, making sure to always be on the same page. He treated practices like games, preparing intensely to maximize his opportunity. 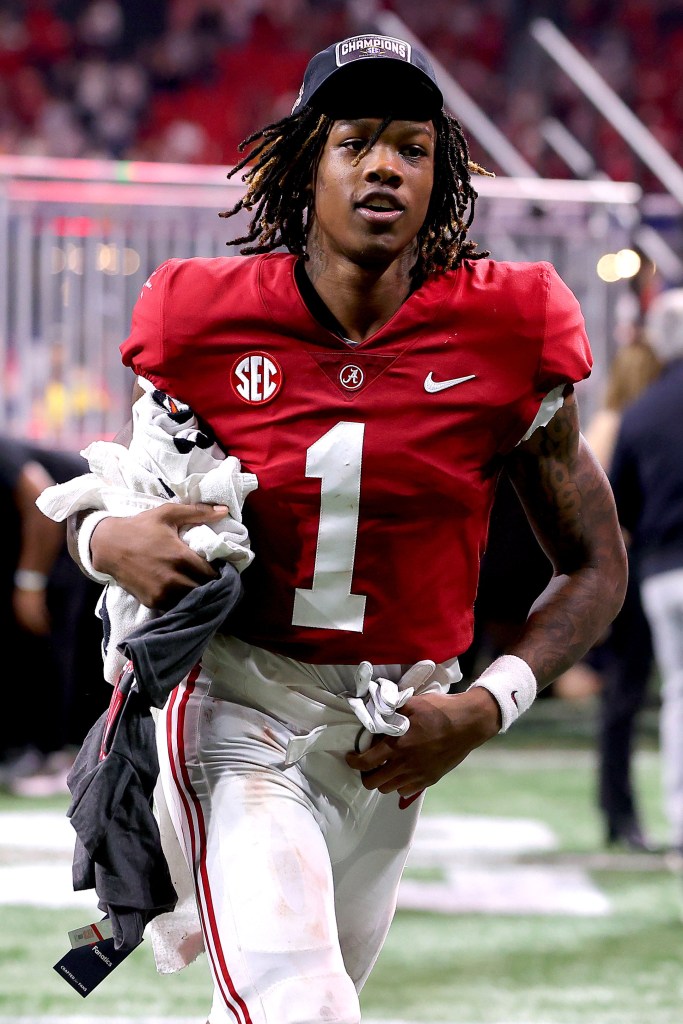 “Seeing him day-to-day, seeing how he approaches things, seeing how hard he works, it’s not surprising for me,” Young said.

The 6-foot-2 wideout made an early statement, notching four catches for 126 yards and a touchdown in a season-opening victory over Miami. After four relatively quiet games that followed, he took off. In his last eight contests, Williams has 51 catches for 1,081 yards and 12 touchdowns. That includes a seven-catch, 184-yard, two-touchdown masterpiece in the SEC Championship game upset of then-top-ranked Georgia.

Lately, nobody is stopping Williams, a former four-star recruit from St. Louis. The Bulldogs’ top-ranked defense couldn’t. Cincinnati, and star cornerback Ahmad “Sauce” Gardner, will give it a shot. Gardner hasn’t allowed a touchdown in his career, but he hasn’t seen anyone quite like Williams, either.

“We’re going to see who wants it more at the end,” Williams said. “The competition, I love it. That’s something I look forward to every week.”

Since last summer when the NCAA began allowing players to transfer once without being forced to sit out, the rate of players switching schools has skyrocketed. Alabama has benefitted from landing Williams and Tennessee inside linebacker Henry To’oTo’o, the Tide’s leading tackler.

There has been debate whether it is the right thing for college football and college basketball. Clemson coach Dabo Swinney recently called it “total chaos,” saying coaches were tampering with other programs’ players, that education has taken a back seat. Lane Kiffin of Ole Miss compared it to free agency. But had Williams stayed at Ohio State, he may not have gotten the opportunity to bust out like he did for the Crimson Tide.

“It works well if the person finds the right spot,” he said.

Williams is a shining example of the benefit. One year in Tuscaloosa has changed his life.