The Best Christmas Video Games to play over the holiday season

It’s the most wonderful time of the year, which can only mean one thing: over in the land of movies, people spend ages engaging themselves in the completely shite patter about if Die Hard is a Christmas movie or not. (It’s not, but it’s a great movie, set at Christmas – so feel free to watch at Christmas. Okay?) But what’s the video game equivalent?

We started thinking about this and couldn’t stop, because we love thinking about utterly stupid, pointless things. So, as we head into the holiday season, here’s our picks for some of the best Christmas video games – that is to say, games featuring or set during the holiday season. It’s not an exhaustive list, just our favourites – feel free to sound off about yours in the comments.

While it’s undoubtedly the worst title in the series, Dead Rising 4 is still an absolutely okay video game – and it’s probably one of the best games at harnessing the energy and trappings of Christmas to enhance its setting. While it technically takes place a while after Christmas, the town of Wilamette is frozen in that post-Black Friday, pre-Christmas period during the events of DR4, with the zombie outbreak having taken place right in the middle of the holiday season.

Everywhere is decked out for Christmas, and the game has a Die Hard sort of approach to its season, using traditional Christmas tunes frequently. What’s more festive than beating a zombie to second-death with a candy cane?

The most recent game on this list, one major way the Miles Morales game differentiates itself from the main Insomniac Spider-Man is by setting it at Christmas – giving the designers an excuse to mix up the look of New York. It might be the same map, but now it has all the holiday trimmings!

The holidays only have the lightest of impacts on the theme of the game, but swinging through the fairy-light lit streets as Miles surely has a festive air to it, and if you’re yet to play this, over the holidays might be the ideal time. 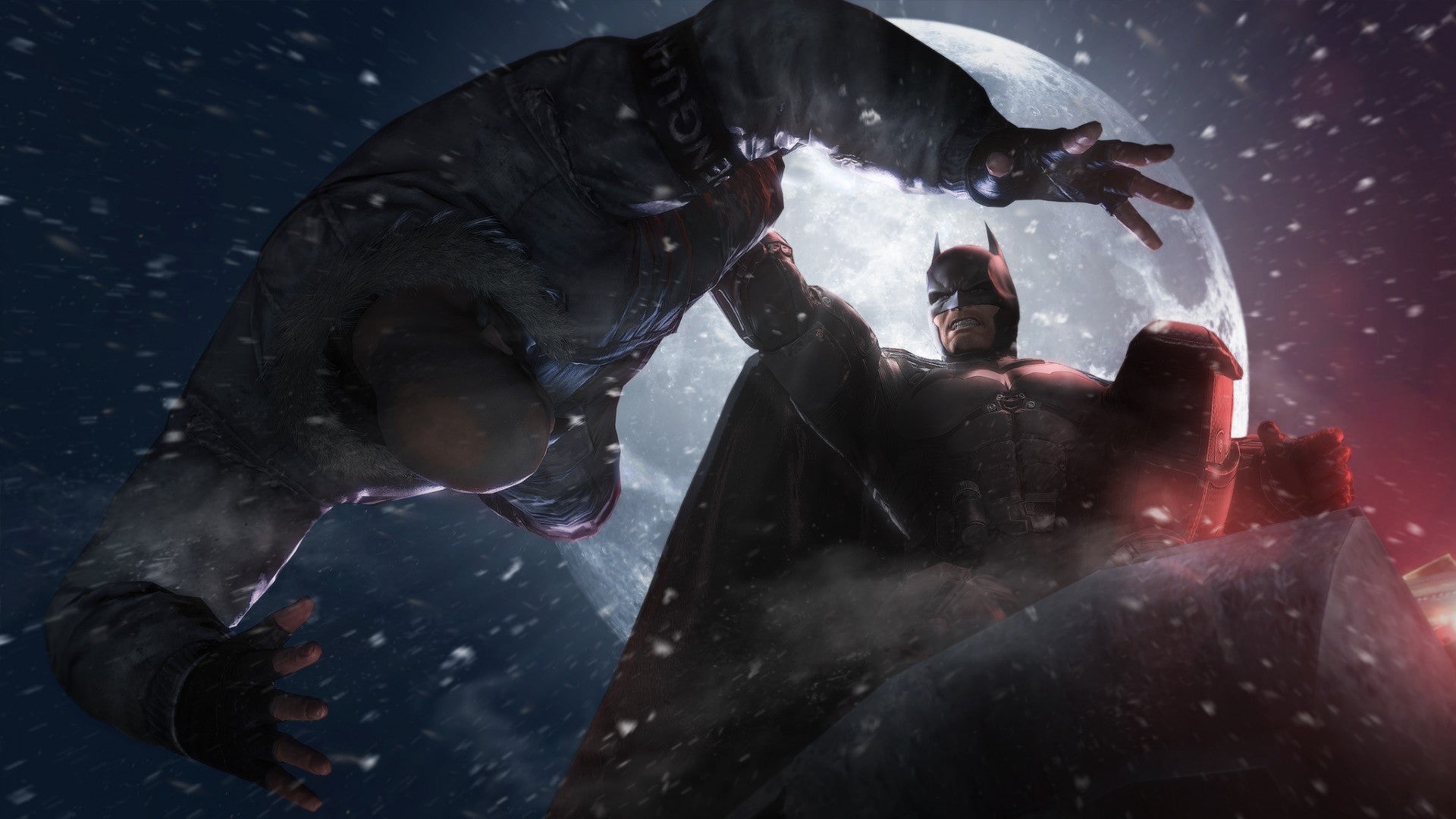 What’s more Christmassy than having a trying night out where loads of old acquaintances come out of the woodwork and cause you a load of hassle? This is Christmas Eve in every pub across the land, and it’s also just another night in Gotham for Batman. That’s what pretty much all of the Batman Arkham games are, but the prequel title, Origins, is actually set on Christmas Eve.

Gotham is hardly the most festive city even when it is snow-capped and set up for the holidays, but, y’know, this is actually set at Christmas. So into the list it goes.

If you want more Batman, by the way, the film tie-in Batman Returns is also set at Christmas, just like its namesake movie. To play that you’ll have to dig out a SNES, Mega Drive, or other consoles of that era, though.

Okay, it’s just one level, and it’s not even an all-original level – but this is a good one. The 2016 reboot of Hitman features “Holiday Hoarders,” a free add-on level which tasks Agent 47 with eliminating two professional thieves. The whole mission is a reference to Home Alone, which itself is a classic movie.

This special Christmas stage is set on one of Hitman 2016’s existing levels, but the map has been tweaked and adjusted to give it a festive look. As well as being playable in Hitman 2016 itself, you can of course use that trilogy’s compatibility to play it in the newer games, too. 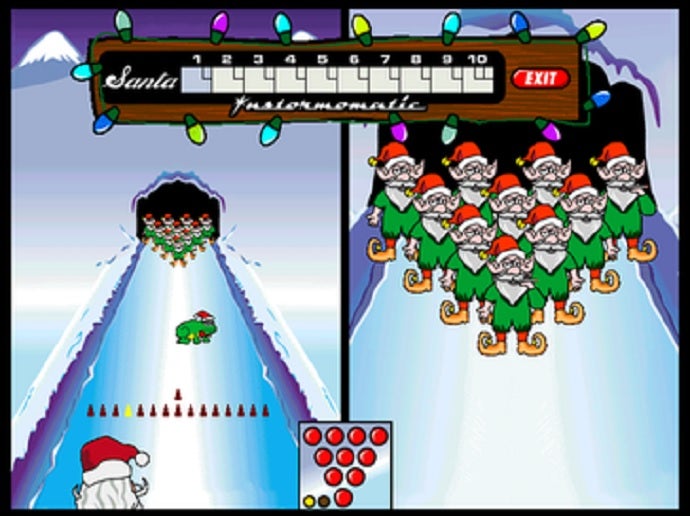 Does nobody else remember this? I mentioned this on a VG247 podcast a few months ago and Tom relentlessly mocked me for it. Released in 1998, Elf Bowling is a low-rent PC title where Santa commits horrible acts of abuse on his employees by forcing his elves to act as living bowling pins. Man, those guys should unionize! (Shouldn’t we all?)

Wikipedia tells me that DS and GBA ports of Elf Bowling received “overwhelmingly negative reviews”, but my primary memory of this game is it taking over the computers at my school; there was a period of time where everybody was playing Elf Bowling, because it was dumb, addictive, and because the elves did rude things like swear or flash their arse at santa.

While playing, perhaps you could watch the movie spin-off? Elf Bowling the Movie: The Great North Pole Elf Strike. It’s got an average IMDB review rating of 1.9/10!

While we all wait patiently for the release of Bayonetta 3, it’s important to remember that not only is Bayonetta 2 good, but it is also a Christmas game – at least in the same sort of way that Die Hard is a Christmas movie, using the trappings of the season lightly, as it’s set in a period of time just before Christmas leading right up until around New Years’.

There’s also some pretty rad Christmas outfits you can put the characters in, if you so choose. 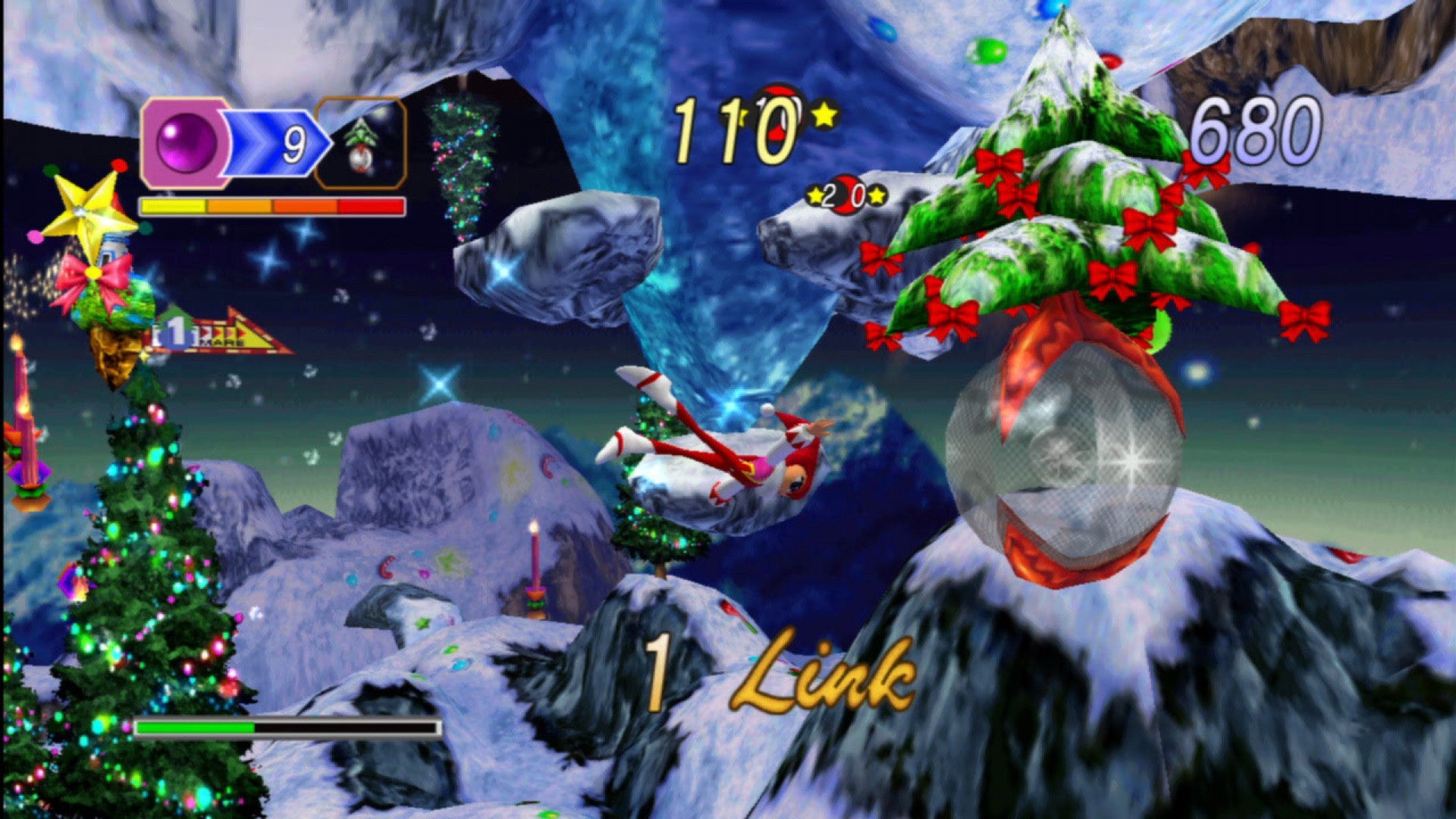 Listen. Truth is I actually think NiGHTS is a little bit rubbish. I think it’s that first game where you really start to see the cracks in Sonic Team, and in the Year of our Lord 2021, it’s also difficult not to compare certain aspects of the game’s presentation to this year’s disastrous Balan Wonderworld, which of course was created and directed by the same man. But I digress. Some people really love NiGHTS, and so here it is.

Even though I’m not really with y’all on the quality of NiGHTS in general, the Christmas version of the game, which was a free bonus release, is pretty neat. It’s Christmas to its very core, where you work to unlock ‘presents’ and even have to place a star atop a tree. One of the presents is the playable Sonic the Hedgehog into Dreams stage, which back on the Saturn was like a holy look into what 3D Sonic might be like.

Christmas NiGHTS is included in the Xbox 360 port of the main NiGHTS, which also happens to be backwards-compatible on all modern Xbox consoles.

If you want to extend that Halloween feeling to Christmas a little, consider looking into classic PS1 genre mash-up Parasite Eve. Part horror game, part action RPG, it’s actually based on a Japanese horror novel, and tracks protagonist Aya Brea as she goes through complete hell on Christmas Eve.

Don’t bother with the most recent game in this series, The 3rd Birthday – despite also being set during the holidays, it is a real turkey, and not in the good festive way. But the original Parasite Eve is brilliant, and features an opening where hundreds of people spontaneously combust. It’s Christmas Eve, and hundreds of people start burning to death out of nowhere! Happy Holidays! 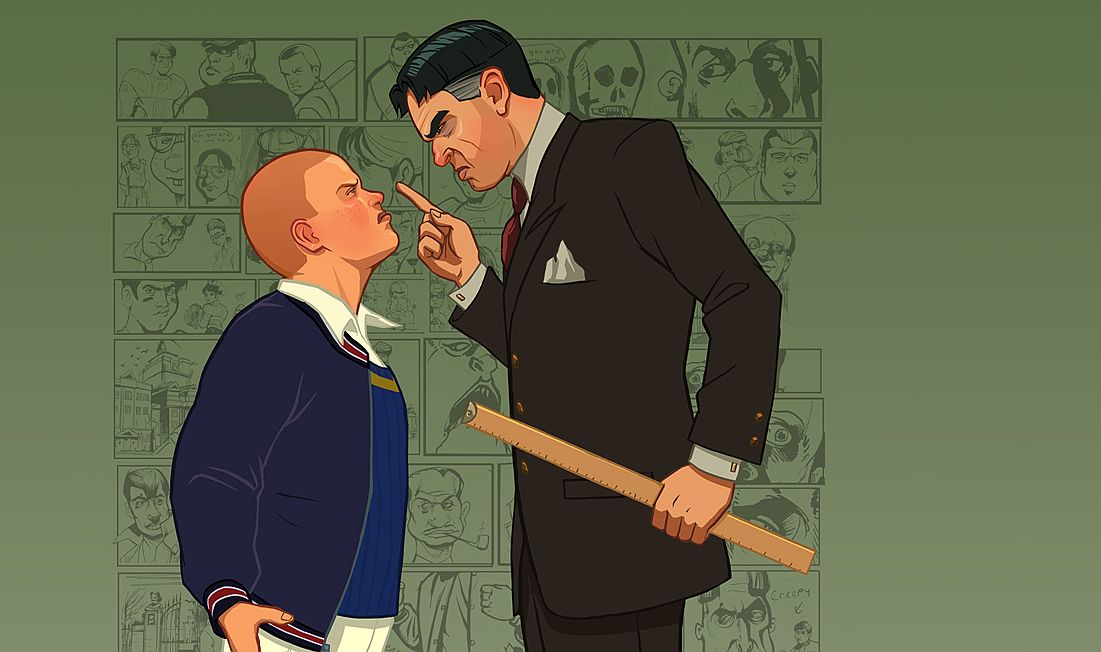 Rockstar’s Bully takes place over the course of an entire school year, which of course includes Christmas. There’s a lot of games that do this, obviously, and it’s usually just a bit of background lip service – but in Bully, Christmas actually matters, and is a tentpole of one of the game’s chapters.

Bullworth is a boarding school, so most of the kids don’t go home for Christmas. The school and the surrounding town gets fully decked out for Christmas, and it really does have a rather nice festive atmosphere, even if you’re up to no good in it.

Following on from what we said about Bully, another game with an advancing calendar that features Christmas heavily is Shenmue. While having a murdered dad and a thirst for revenge doesn’t feel very festive, there is a poorly voice acted man who walks around as Santa in the run-up to Christmas in this game. That has to count for something.

There’s not much Christmassy about monkeys and tropical islands, but there is a neat little Easter Egg in this game if you ever play it over Christmas – and it’s still a great platformer that holds up well, so is worth your time.

At the file select screen, enter “Merry” as your file’s name. Start the game. It’ll play as normal, but any time you enter a bonus stage it’ll now have Christmas themed music, while the collectibles you’re after are switched out to bells and presents. Festive! This works on both the GBA and SNES versions.

If you really want to go meta, how about this one? Dig out the PS1 and play this, one of the best-ever movie adaptation video games – which is basically three games in one. The original Die Hard gets a third person shooter, Die Hard 2 is a rail shooter, and Die Hard 3 is a driving game. Only the first two of these are set at Christmas, of course, so for the purposes of this article, forget about the latter.

The truth is, these games are even less Christmassy than the film. I’m pretty sure the developers forgot the first two Die Hard movies are set at Christmas at all; you work your way up many floors of the Nakatomi Plaza with little references to the holiday in sight. But it does have a voice actor doing an extremely dubious Bruce Willis impersonation, and it is called Die Hard – so play it, and then get on twitter and scream at anyone who’ll listen about how it’s a ‘Christmas Game’, yeah?

Is A Vegan Diet Best For Diabetes? Here’s What Studies Suggest

Battlefield 2042’s community-made zombies mode has been removed because of XP farming • Eurogamer.net

Looking Back At Banjo-Kazooie | All Things Nintendo