Netflix’s Hilda opens with gorgeous mountain skyscapes and serene forests as protagonist Hilda, and her deer-dog Twig, scope out their first adventure: Sketching a rock-troll who is frozen in statue form until sundown. Like all of her escapades, she plays it close to the cuff. As the sun lowers, instead of heading back, she adds a few more sketch-lines — the troll chases her all the way home.

Hilda has the gorgeous feel of a fantasy storybook, wrapped in the cozy blanket of a folktale. The show, which debuted on Netflix in 2018, is also criminally underrated. Adapted from Luke Pearson’s acclaimed Hilda comics, the animated series follows the young blue-haired girl as she gets into all sorts of trouble in the show’s Scandinavian-folklore inspired world. Trolberg is no normal city. There are all sorts of wild creatures and monsters that live in town, and around its perimeters — from the plant-looking Vittra who live in complex tunnels under town, to the Wood Man who lives in the lush, surrounding forests.

Throughout the series, Hilda and her Sparrow Scout friends Frida and David go on tons of adventures, all while collecting badges and coming to the aid of the local wildlife. It’s loads of fun to watch, but it also has some valuable lessons about the importance of nature, and being mindful when thinking about interacting with wild animals. After two seasons, which wrapped at the end of 2020, Hilda is finally resuming in the form of a movie. Hilda and the Mountain King will release on Dec. 30. Now is the perfect time to catch up.

Hilda opens with mother and daughter living in a cabin in the woods, which are absolutely bursting with wild creatures that Hilda loves to observe, sketch, and chat with. But after their home is obliterated under the foot of a giant, in the second episode, the two relocate to the city of Trolberg. Hilda is initially depressed about moving to a city; she’s fiercely protective of her forest life. She’s probably right, in a literal sense. But throughout the season, she comes to realize Trolberg is teeming with natural life of a different kind — only they’ve adapted to the city’s environments, just as she is being forced to.

After watching so many Planet Earth-style documentaries on Netflix, it’s easy to think of nature as somehow detached from metropolitan or suburban life — or any kind of living that isn’t rural or remote. I often fall into this fallacy of thinking, where “nature” is this static idea of a packed ecosystem that’s closer to being “pristine” or is more “untouched” by humans. “Nature,” by this definition, exists far away from cities with their unceasing pollution — in both material and sound — and their busy streets.

But that’s far from reality. Birds fly overhead, and congregate on shorelines and on telephone wires; smaller creatures like squirrels, gophers, and rabbits have found habitation in yards and parks. In Southern California, where I live, coyotes, mountain lions, and bears also make their homes in the arid desert land, despite the suburban sprawl. Insects proliferate below our feet, rats and mice squeeze into places we’d rather not see them. All of this isn’t to say animals aren’t endangered by metropolitan life. But they also have adapted around us — and to not see them means you’re not looking.

Watching Hilda reminded me of this. Though Hilda’s many wild creatures are those of myth, they exist in droves across the city. Some are literal elves, tiny and invisible to the human eye — unless you sign an extremely long contract that allows you to be able to see them. Some are funny, anthropomorphic plants like Vittra or majestic like the fluffy, flying, dog-like Woffs. Some are a bit grotesque, as in the case of the rat king that lives in the sewers. And some are fearsome and intimidating, as in the case of the trolls that live around city limits, held out by the walled perimeter. But they are all deserving of care, in Hilda’s eyes, even when it’s as dangerous as turning off the city’s “anti-troll” bells that causes the troll population pain.

In each episode, Hilda uncovers some new corner of Trolberg’s bustling scene of fantastical creatures, making it clearer and clearer just how the city has become its own unique ecosystem where these creatures continue to make their home. 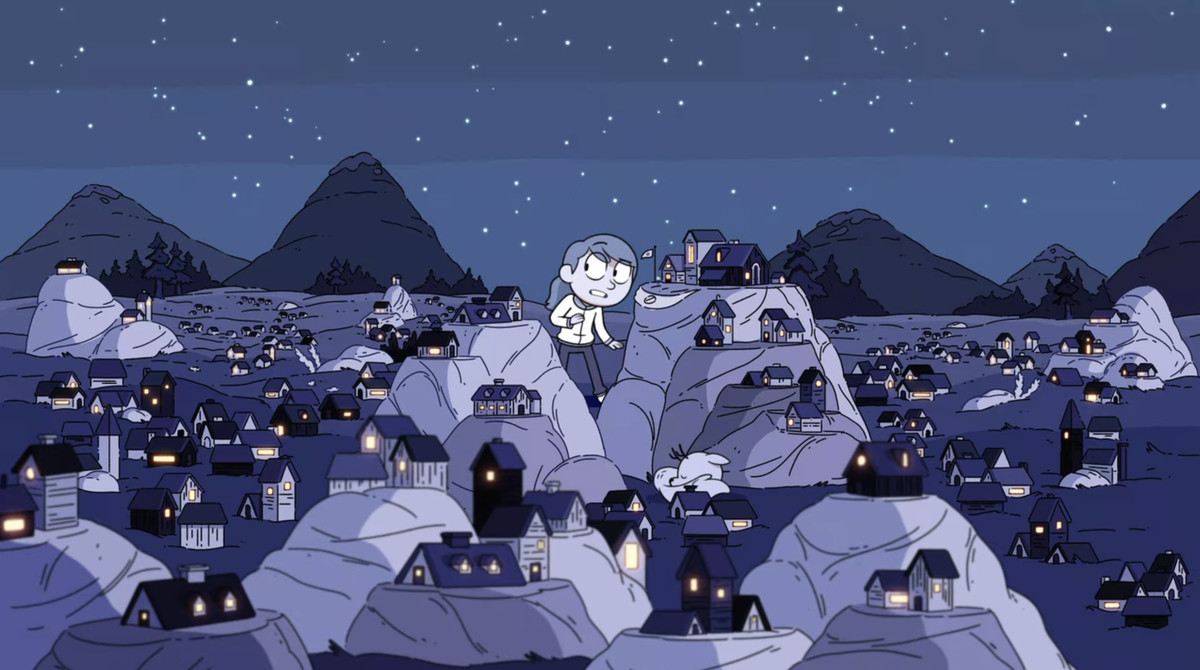 A young hero who is allowed to make mistakes

Hilda can be difficult to watch, as the titular character often over-involves herself in all sorts of dangerous scenarios — putting her overworked single mom into a panicked state — clinging to a self-image of expertise as a forest dweller, compared to her city-slicker friends. But this is also key to what makes the show so important. Her blunders are those of a child, and however stressful they can sometimes be, it’s enjoyable to see Hilda grow into her profound confidence having made those mistakes. It’s refreshing to watch a show about a young girl who has no shortage of confidence, and whose missteps never browbeat her into meekness.

Hilda does come to the aid of quite a few creatures. In the pilot, after learning about the existence of tiny elves whose houses she’s been smashing underfoot, she becomes determined to fix the damage she’s caused. But the show also doesn’t flinch away from the serious consequences of jumping in before thinking. In the same beautifully cyclical episode, she also makes a discovery about a skyscraper-sized being in the forest, and helps it find what it’s looking for. The two-episode arc ends with the giant accidentally crushing her home, which then incites her mom to move them to Trolberg. It’s all a fine balance.

This approach is also true of Hilda’s relationship with her friends. She often inserts herself in someone else’s business only to make their life more difficult. She tends to act rashly, not thinking things through and brushing past the fine print, both metaphorically and literally. When Hilda creates a Tide Mouse, a luck-imbued, enchanted mouse that helps its target succeed at a specific task, at the expense of their mortal soul, Hilda doesn’t read the entire spell in the witch’s spellbook — nor did she ask her friend if he wanted the help. The resulting creature ends up enhancing David’s singing voice, all while munching away at his soul. 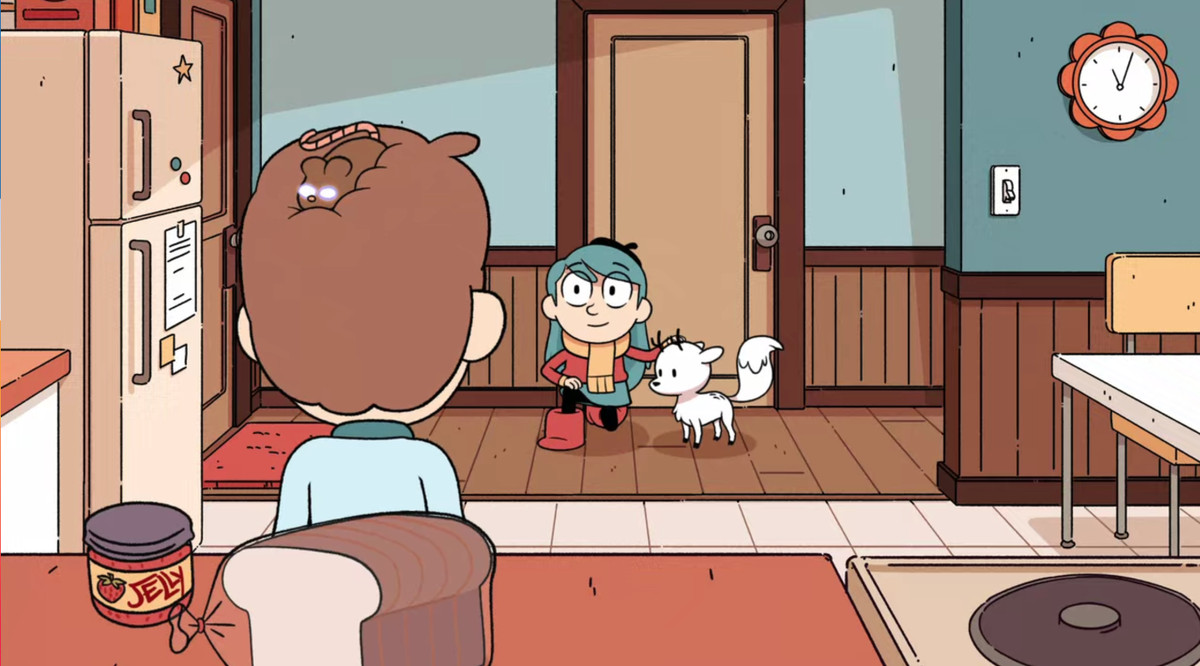 Each episode imparts a solid lesson in taking consequences for your actions. It’s an excellent antidote to more standard children’s television that falls into a kind of “chosen one syndrome.” So much of children’s media perpetuates this idea that, if motivated by the right set of morals, everything will be okay as a result of purely good intentions. In Hilda, things don’t always work out. Frida disappears from the Sparrow Scouts because failing to clean her room sends her into a spiral. At times, the two friends can barely tolerate each other.

The show is an absolute must-watch, for adults and children alike. Hilda’s pluck despite, or perhaps because of, her many imperfections make her a great protagonist for younger kids who are navigating the boundaries between themselves, their friends, and the natural world. This is especially true for young girls, who may find comfort in Hilda as a brazen adventurer who makes mistakes. For the rest of us, Hilda is a return to that childlike state of confidence and curiosity, and a portal into the natural world that exists regardless of our surroundings. But be forewarned — the second season ends on a massive cliffhanger, as Hilda has gotten herself into a dangerous situation that might not resolve well. We’ll have to wait until the movie is released on Dec. 30 to figure out how things shake out.

Omicron Is Enforcing Its Own Soft Lockdown

5 Tips for the Best Fudge

You Can Win a Pack of the Nostalgic Crystal Pepsi Soda