Ray Illingworth, who was one of the leading figures in English cricket for the best part of four decades as player, captain, commentator, administrator and coach, has died at the age of 89.

His forthright Yorkshire tones and confrontational style never left anyone in any doubt as to how he felt, but made him a well-known figure in the game, even among those too young to remember a shrewd Test captain who enjoyed a playing career of unusual longevity.

Illingworth began his first-class career in 1951, two months after his 19th birthday – and remarkably, it continued for a decade after he played the last of his 61 Tests, before retirement finally came in 1983, aged 51.

Soon, he was a sought-after television commentator, yet in his 60s, took on the role of England’s chairman of selectors – even combining it with the job of coach for a controversial spell.

From the RAF to the Test arena

Born in Pudsey on 8 June 1932, the young Raymond Illingworth began playing at his local club in Farsley, where he would reside for nearly all of his life.

National Service in the Royal Air Force slightly delayed his progress, though he played for an RAF team which featured future England team-mates Jim Parks, Fred Titmus and Fred Trueman, and hit 56 on his Yorkshire debut in 1951.

An all-rounder, Illingworth switched from seam to off-spin in his late teens. In 1957, he completed a seasonal “double”, passing 1,000 runs and 100 wickets (a feat he would match five more times in the next seven years), and England came calling in 1958 when he debuted against New Zealand at Old Trafford.

Bowling proved his stronger suit at international level and he proved his worth as a miserly spinner. He had to wait more than a decade for the first of his two Test centuries but he always sold his wicket dearly.

Ashes success, Leicestershire titles and back to Yorkshire 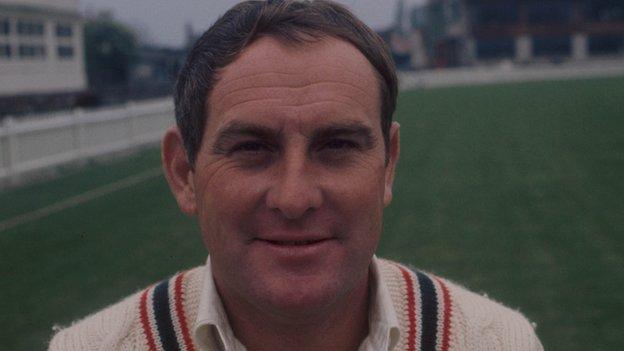 Illingworth was a stalwart of the hugely successful Yorkshire side that won seven of nine county championship titles from 1958, including three successive triumphs from 1966 before a contract dispute saw him leave.

After moving to Leicestershire as skipper in 1969, Illingworth led England for the first time that year aged 37. Initially a stand-in for the injured Colin Cowdrey, he kept the job as England were unbeaten in Tests for three years.

The highlight of his reign was regaining the Ashes in Australia in 1970-71, when England won an epic seven-Test series (including one abandonment) 2-0, as Illingworth got the best out of players such as Geoffrey Boycott and John Snow.

It proved a rancorous series, played in front of hostile crowds and officiated by what the tourists saw as biased Australian umpires – who did not give a single lbw decision to English bowlers in the entire series.

In the final Test at Sydney, pace spearhead Snow was warned for intimidatory bowling – and was then pelted with beer cans and grabbed by an angry spectator as he went to field on the boundary.

In response, Illingworth took his team off the field, and play only resumed after he was warned by the umpires that England risked forfeiting the match.

Illingworth’s England captaincy, and career, ended after a series defeat by West Indies in 1973, the year he became a CBE, but he led Leicestershire to four one-day trophies as well as their first County Championship title in 1975.

Having brought the curtain down on his playing career aged 46 in 1978 (or so he thought), he returned to Yorkshire – without a trophy since 1969 – as manager.

But in 1982, he pulled on the whites again to captain the side for a further two seasons, bowing out after leading them to the Sunday League title in 1983, despite finishing bottom of the Championship for the first time.

He soon became a regular voice on the BBC’s TV cricket coverage.

Illingworth inherited Atherton as captain from the previous regime, fined him for the “dirt in the pocket” saga, and clashed with him over selection

Illingworth succeeded fellow ex-England captain Ted Dexter as chairman of selectors in 1994, inheriting new captain Mike Atherton – and fining him that summer for the notorious “dirt in the pocket” affair.external-link

But while Illingworth the captain had insisted on having the team he wanted, and clashed with tour manager David Clark in 1970-71, Illingworth the chairman found himself similarly at odds with Atherton.

The skipper was denied the players he wanted for the 1994-95 Ashes in Australia, or the 1996 World Cup in Asia – by which time Illingworth was also doubling up as coach and manager, having become team “supremo” after coach Keith Fletcher was sacked in 1995.

His man-management was questioned as he fell out with England players such as Devon Malcolm and Robin Smith, and was not always in tune with cricketers four decades his junior.

Off-spinner Neil Smith, selected as an unlikely opening batter at that World Cup, said of Illingworth: “As a new player I thought I might get a bit of input from Ray, but I didn’t get anything at all.

“We had two discussions – one about Fred Trueman and Brian Statham, and the other about holiday homes in Spain.”

Illingworth attempted to set the record straight by writing a book entitled One-Man Committee – and found himself charged with bringing the game into disrepute, which hurt him deeply.

Having lost the job of coach after that World Cup, with David Lloyd taking over, Illingworth carried on as chairman of selectors for another year before handing over to David Graveney in 1997.

He had a heart attack in 2011 during his second year as Yorkshire’s president, and revealed in November 2021 that he was receiving treatment for oesophageal cancer.

At the time of his death, he was the oldest player to have featured in a one-day international, having led England against Australia in the world’s first ODI in 1971.

The Ten Most Significant Science Stories of 2021 | Science

Who needs Horizon Call of the Mountain when you can play the R.E.A.L. thing in VR? • Eurogamer.net

Sponsorship is Big Business in F1