For the past 31 years the Hubble Space Telescope has been an invaluably versatile observation platform for astronomers but it’s begun showing its age of late. Last serviced in 2009, the telescope has had to enter the partial-shutdown “safe mode” multiple times over the last few years — most recently, this October. And while optimistic estimates suggest that the Hubble could remain in operation through the end of the decade, NASA, with its ESA and CSA partners, have already spent more than a dozen years developing a successor, the James Webb Space Telescope (JWST). When the Webb launches — currently set for liftoff on Christmas Day — it will take over as humanity’s preeminent eye in the sky for decades to come.

The 7.2-ton JWST will be the largest telescope NASA has ever put into orbit. Its 6.5-meter primary mirror array — composed of 18 gold-plated hexagonal segments — is more than twice the size of the Hubble’s and nearly 60 times larger in area than the Spitzer Telescope, which retired in 2020. The sun shield it uses to protect its delicate infrared sensors is nearly as long as a tennis court, and the telescope apparatus as a whole stands three stories tall. The 458 gigabits of data collected daily will be first routed through NASA’s Deep Space Network, then transmitted to the Space Telescope Science Institute in Baltimore, Maryland, which will collate and disseminate that information to the greater astronomy community.

When it reaches its orbital home at the L2 Lagrange point 930,000 miles from Earth, the JWST will begin its four-point mission: searching for light from the earliest post-Big Bang stars; studying the formation and development of galaxies, examining the evolution of stars and planetary systems; and seeking out the origins of life.

To do so, the Webb will take a different approach from the Hubble before it. While the Hubble looked at the universe in the visible and ultraviolet spectrums, the JWST will see in infrared, just as the Spitzer used to but with far greater resolution and clarity. Using this infrared is critical to the Webb’s mission as that wavelength can peer through clouds of interstellar gasses and dust to see otherwise obscured objects beyond.

The Webb’s camera suite is made up of four individual components: the Mid-Infrared Instrument (MIRI), Near-Infrared Camera (NIRCam), Near-Infrared Spectrograph (NIRSpec), and the Near-Infrared Imager and Slitless Spectrograph/Fine Guidance Sensor (NIRISS/FGS). These instruments are actually so sensitive that they can detect their own heat radiation when they’re operating. To minimize these infrared emissions, three of the sensors are chilled to negative 388 degrees Fahrenheit (-233 degrees C). The especially sensitive MIRI is cooled even further to -448 degrees F (-266 degrees C) — that’s a mere 7 degrees Kelvin above absolute zero.

Getting the MIRI that cold is no easy feat. After the JWST makes its way into orbit, the telescope will spend weeks slowly chilling the sensor to its optimal operating temperature using a helium-based refrigeration system.

“It’s relatively easy to cool something down to that temperature on Earth, typically for scientific or industrial applications,” said JPL cryocooler specialist Konstantin Penanen in a recent NASA blog post. “But those Earth-based systems are very bulky and energy inefficient. For a space observatory, we need a cooler that is physically compact, highly energy efficient, and it has to be highly reliable because we can’t go out and repair it. So those are the challenges we faced, and in that respect, I would say the MIRI cryocooler is certainly at the cutting edge.”

The extra effort that MIRI requires will be well worth it as ground-based infrared telescopes — especially those operating within the mid-infrared spectrum as MIRI is, are largely hampered by heat emissions from the devices themselves and the surrounding atmosphere.

“With the other three instruments, Webb observes wavelengths up to 5 microns. Adding wavelengths out to 28.5 microns with MIRI really increases its range of science,” George Rieke, professor of astronomy at the University of Arizona, said earlier this month in a NASA blog. “This includes everything from studying protostars and their surrounding protoplanetary disks, the energy balance of exoplanets, mass loss from evolved stars, circumnuclear tori around the central black holes in active galactic nuclei, and a lot more.” 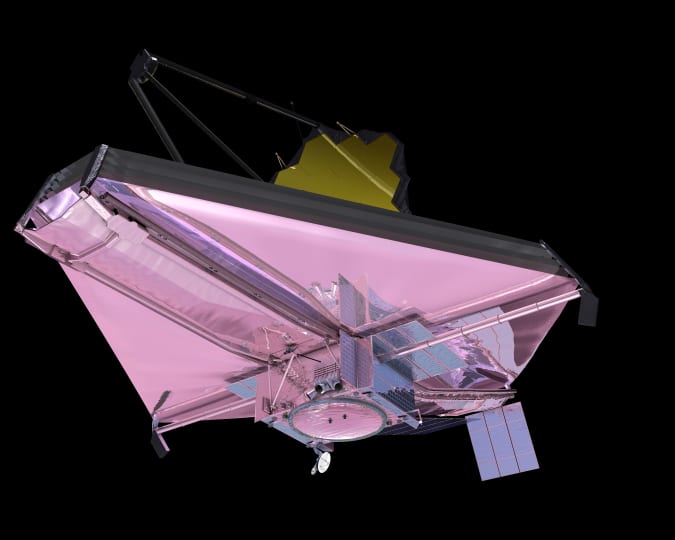 Given the JWST’s highly specific low temperature needs, keeping the telescope’s sensor suite out of direct sunlight (and blocked from other light sources like the Moon and Earth) is crucial. To ensure that those cameras are perpetually shaded, NASA engineers have built a five-layer sunshield made from aluminum-coated Kapton film to keep them in the cold, cold dark.

“The shape and design also direct heat out the sides, around the perimeter, between the layers,” said James Cooper, the JWST’s Sunshield Manager at Goddard Space Flight Center. “Heat generated by the Spacecraft bus at the ‘core,’ or center, is forced out between the membrane layers so that it cannot heat up the optics.”

Measuring 69.5 feet by 46.5 feet by .001 inches, the kite-shaped sun shield is stacked five layers high so that energy absorbed by the top layer radiates out into space between them, making each successive layer slightly cooler than the one above it. In fact, the temperature difference at the outermost (383K, or 230 degrees F) and innermost layers (36K, about -394 degrees F) is roughly an order of magnitude. 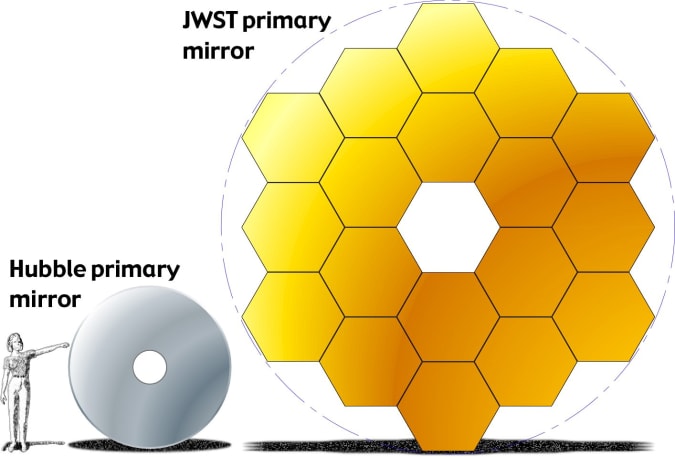 In order to collect enough light to view the fainest, most distant stars possible — some as far as 13 billion light years away — the JWST will rely on its massive 6.5m primary mirror array. Unlike the Hubble, which utilized a single 2.4m-wide mirror, the Webb’s mirror is divided into 18 individual segments, each weighing just 46 pounds thanks to their beryllium construction. They’re coated in gold to enhance their reflection of infrared light and hexagonal in shape so that, when fully assembled in orbit, they’ll fit together snugly enough to act as a single, symmetrical, gapless reflective plane. Their small size also allows them to easily be split up and folded down in order to fit within the tight confines of the Ariane 5 rocket they’ll ride into orbit. 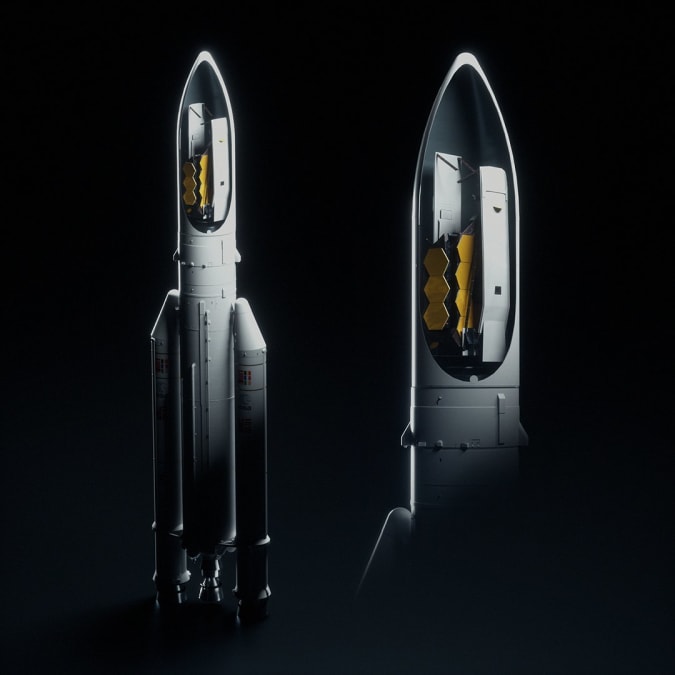 The role of coordinating these segments to focus on a single spot in a distant galaxy falls to the mirrors’ actuator assembly. Seven small motors sit on the backside of each mirror segment (one at each corner and a seventh in the middle), enabling precise control of their orientation and curvature. “Aligning the primary mirror segments as though they are a single large mirror means each mirror is aligned to 1/10,000th the thickness of a human hair,” said Webb Optical Telescope Element Manager, Lee Feinberg.

After 20-plus years of development and delays, costing $10 billion and involving the efforts of more than 10,000 people, the Webb Telescope is finally ready for launch — and hopefully this time it’ll actually take. The program has seen delay, after delay, after delay to its launch schedule. NASA abandoned the initial date of March 2021 in the wake of the initial COVID-19 outbreak and its associated lockdowns — though, to be fair, the GAO in January 2020 had only given the JWST a 12 percent chance of getting off the ground by the end of this year — and set a vague “sometime in 2021” timetable for its launch. 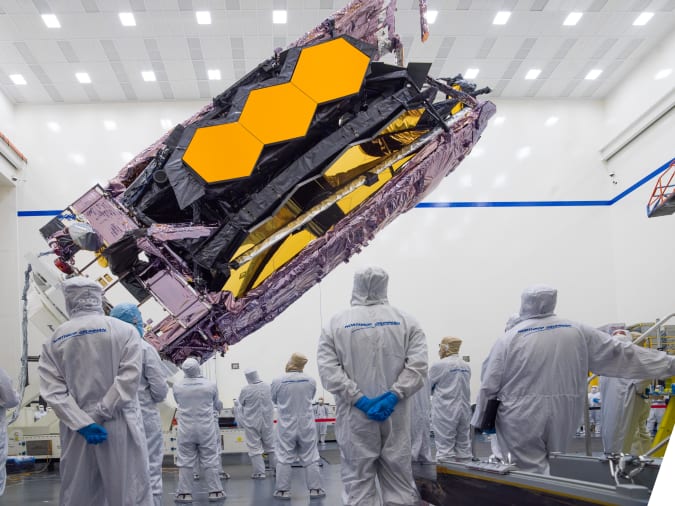 NASA later revised that estimate to a firm “sometime in October 2021,” eventually settling on a Halloween launch window, only to delay it again to late November/early December. Of course, early December quickly became late December, specifically the 22nd, which was then nudged back once again to its current date of December 24th. Actually, make that the 25th.

These delays have been caused by the myriad factors that go into getting an instrument of this size and sensitivity ready for launch. After completing its construction, the JWST had to undergo an exhaustive battery of tests, then be gently loaded into a shipping container and transported to its launch site in Kourou, French Guiana. Once there, the actual task of prepping, fueling, and loading the JWST onto an Ariane 5 rocket took another 55 days.

That timeline was further extended due to an “incident” on November 9th wherein, “a sudden, unplanned release of a clamp band — which secures Webb to the launch vehicle adapter — caused a vibration throughout the observatory,” per NASA. The Webb’s anomaly review board initiated an additional round of testing to ensure that those vibrations didn’t damage other components or knock anything important out of alignment. 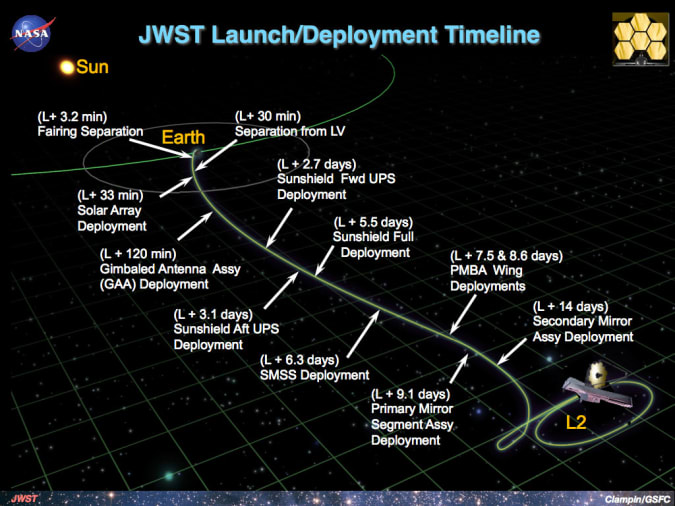 Now that the telescope has been deemed A-OK, final preparations are underway. Barring any more setbacks, the JWST will launch at 7:20 ET on Christmas Day (watch here live!) to begin its 30-day, 1.5 million kilometer-long journey out the Lagrange 2 where it will spend the net two weeks slowly unfurling its mirrors and sunshield, then begin exploring the depths of the early universe.

Say it ain’t Joe: Manchin’s not the only big hurdle left for Biden’s megabill

What we learned from our family’s outbreak about preventing COVID’s spread : Shots