Tensions are flaring between Russia and a number of Western nations, but there is hope that newly-announced talks with the US could reduce the risk of escalation and boost stability in Europe, Moscow’s Foreign Minister has said.

Speaking as part of an exclusive interview with RT on Wednesday, Sergey Lavrov said that Russia is facing a series of challenges on the world stage, both in terms of a growing standoff over Ukraine and in relations with other states.

According to the country’s top diplomat, Moscow may soon lose patience with the harassment of Russian media abroad, which he said has been tolerated for years. Lavrov cited the example earlier this week of authorities in Berlin moving to shut down RT’s new German-language channel. The Foreign Minister said that there are efforts to paint RT “in the worst possible light” and claimed this is just one part of a coordinated anti-Russia campaign.

Following the ban, and in the wake of RT DE’s German-language YouTube channel being deleted, citing breaches of the platforms policy, Lavrov said it is clear that there is a political dynamic to the moves. Regulators “will likely again point the finger at social media, YouTube, and claim that these groups acted on their own accord based on their own criteria and that the German government has nothing to do with it,” he went on. “But it does. A state, on whose territory such abuses take place, has the responsibility to stop them.” 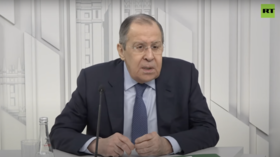 “Until recently, our determination was not to go down the same path of strangling the press, of strangling the media, that our Western partners took,” he insisted, hinting that the Kremlin may be considering cracking down on German media operating in Russia as retaliation.

Lawmakers in Russia’s parliament indicated last week that they may tighten the country’s controversial “foreign agent” laws, which restrict the activity of media organizations in the country receiving funding from overseas. The laws have come under fire from news organizations who say they stifle press freedom, and in August, a group of editors published an open letter decrying what they called “the persecution of independent journalism in this country.”

The commission of MPs tasked with looking into the issue rejected the idea that the laws infringe on civil rights, arguing that they simply needed to be adjusted based on the experiences of investigators. “Once the law enforcement research has been collected, it’s possible that the law will be refined and expanded,” they said.

Last week, Lavrov’s deputy, Sergey Ryabkov, unveiled a series of proposals addressed to both Washington and to NATO as part of an effort to seek guarantees that the US-led military bloc will not expand closer to Russia’s borders, including turning down Ukraine’s long-standing requests to join. Lavrov confirmed that talks have now been scheduled with his American counterparts, billed for early next year, with Secretary of State Antony Blinken having said that the two sides will hold discussions in early January. 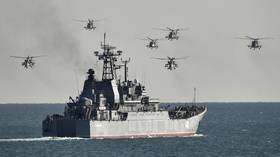 The diplomat emphasized that Moscow is seeking written assurances limiting NATO enlargement and troop movements, while adding that Russian authorities don’t believe they can trust promises from Washington. “Threats have been multiplying around us for decades, on a consistent basis,” he said. “NATO military infrastructure is already nearing our borders. They have regularly deceived us, first with verbal promises, and then even with the political obligations encoded in the fundamental Russia-NATO [Founding] act.”

Asked about Washington’s reaction to a list of security demands that Russia submitted last week, Lavrov replied, “speaking about the real reaction, not the rhetorical one, I would say it’s business-like on the side of our American colleagues. There was a series of conversation on the level of the presidents’ foreign policy aides, and as a result of the contact, there was an agreement on organizational models for future work.”

He also commented on what he described as a tendency in Washington to act as the world’s supreme authority. “Yesterday, I think, my colleague, Secretary Blinken, announced that the US can’t not play a leading role in today’s world, can’t not define its rules. And practically every one of his interlocutors says, every time: how good that you are once more commanding us all,” Lavrov jested.

Despite a series of claims that Moscow could be planning an all-out offensive against neighboring Ukraine, Russia does not want to fight an armed conflict, Lavrov added, arguing that his country “would not want to choose the path of confrontation.” 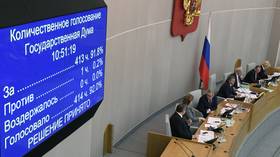 However, he went on, Moscow will continue taking steps to defend itself and warned “hot heads” in Ukraine against military confrontation. The Foreign Minister cited recent remarks by President Vladimir Putin that Russia “has all the capabilities in place to ensure a full military and technical response to any kind of provocations that might unfold around us.”

Responding to allegations that the Kremlin has obstructed diplomatic work meant to solve the conflict in Ukraine’s Donbass region, where separatists have declared breakaway republics and are fighting a civil war, Lavrov insisted that it is up to the Ukrainian side to follow prior agreements. “We are extremely worried by how Kiev is distorting the Minsk Accords and turning them upside down,” he said, referring to treaties signed in 2014 and 2015, which have not been yet put into effect, and which Russia has blamed Ukraine for failing to uphold by refusing to hold talks with separatist leaders and worsening the fierce fighting.

On the possibility of diplomacy with Washington to alleviate the tensions in the region, Lavrov said, “the fact that the US authorities have been quite expeditious with regards to organizing future contacts, I believe it is a positive sign, regardless of the substantial work ahead.”

The Coquito Recipe Everyone Begs Me For

How Bulletproof Is Pattinson's Batsuit In The Batman?

Democrats Bring Fight Club to Atlanta, and the GOP Is a No Show