It is cold in many parts of the world right now, so it seems like the perfect time to write an article on beaches.  Yes, we have great beaches in the US, but so does Europe. Europe is obviously vast, very vast in fact and the miles and miles of coastline in one part of the continent will look incredibly different from another part of it. While a lot of travelers to Europe will no doubt be familiar with the sunny beaches of the French Riviera or the Spanish coast, European beach culture extends to way more than just the water of the Mediterranean. French islands and hideaways that inspired Money and Spanish white sand on the Balearic Islands that somehow straddle the Arctic Circle are just beachy gems that often get overlooked. Not to mention the rugged coast and dramatic cliffs of Northern countries like Sweden and Scotland that make for amazing photo opportunities.

Europe is typically divided into its regions with each region offering something different. The Balkans with its multicultural peoples, beautiful forests, and ancient monasteries also have some of the best beaches on the continent while further up north in Baltics, medieval towns and extensive coastline means that you can come across some stellar beaches in places like Lithuania and Estonia. Naturally, if you’re looking to party in the sun, countries like Greece, Turkey, and Cyprus have you covered. So if you’re looking to tan and swim or indulge in fresh seafood and wine by the ocean, here are some of the best beach destinations in Europe.

Enjoy your European beach vacation by pretending you’re Odysseus. Kefalonia is said to be the home of Ithaca in Homer’s epic The Odyssey. So it goes without saying that the people who have lived here since the bronze age probably know a thing or two about a good beach. Kefalonia itself is located in Western Greece in the Ionian sea and is one of the biggest islands in the region and the 6th biggest out of all the Greek Islands. Myrtos Beach is certainly one of the most dramatic beaches in Greece as it sits between two mountains with limestone and marble sediment visible in the cliffside as it transitions into smaller white cobblestones the closer it gets to the shoreline. The marble sediment in the ground then gets into the water creating the beach’s iconic turquoise shade of blue. Grab your camera to capture the intense sunsets of the Ionian or grab a spot at a taverna above the cliff.

As part of the Balearic Islands, Formentera is a little out there in comparison to more continental beaches you’ll typically find on the European mainland. But its seclusion is just another thing that makes it truly special. The island of Formentera has been occupied since 1,000 B.C.E and changed hands multiple times going from the Romans to the Goths, to the Arabs until finally the Kingdom of Spain. Hippies and backpackers have been visiting the island since the 60s and what makes Platja de Ses Illetes a stand-out is that it can easily be mistaken for an exclusive Caribbean hideaway. The soft white sand leading to the brilliant turquoise waters is part of a protected reserve of land to ensure that it remains unspoiled and untouched by human intervention. Bob Dylan even lived in the island’s lighthouse for a short time.

Swedes know about Fårö but the average traveler to Scandinavia might overlook this little island just north of Gotland. The area is, in general, a popular summer resort with beautiful natural landscapes, nature reserves, Ice-Age stone monoliths, and cultural importance. Legendary Swedish filmmaker Ingmar Bergman lived and died on Fårö and shot several of his films on the island. Sunderland is easily the most popular beach in the area with cabins to rent available and stretches of the sandy shore as far as you can see.

You might not necessarily be tanning or summering here but the Lofoten Islands in the northern part of Norway offer some of the most unique landscapes you’ll come across in Europe. The distinctive scenery here is off the charts with dramatic cliffs, towering mountains, jagged peaks, and sheltered bays. This spot is an outdoorsman’s paradise with gorgeous vistas everywhere you look. A lot of the land here is unspoiled, untouched, and sitting about 105 miles north of the Arctic Circle means the sun is continuously over the horizon from about May to July. But to anyone visiting Kvalvika Beach don’t let the Arctic position fool you. Winters here are actually quite mild with winter temperatures rarely going below 30F (-1 C). The reason for this is the mild air currents coming off the Norwegian Sea and mild airflow moving up from the Atlantic.

The walk to Kvalvika Beach is easy and filled with spectacular scenery. Emerald green hills lead to pristine cold blue waters surrounded by cliffs flanking each side. It’s definitely not the quintessential European beach destination and that’s what makes it so unique.

Nugal Beach is one of those “in-the-know” types of places. It’s not super popular but those who know about it know about it for a reason. Situated on the gorgeous Makarska Coast in Croatia, Nugal Beach offers beautiful blue waters, sunny summer weather, and sandy shores by the Adriatic Coast. The stretch of beach along the coast here goes on seemingly forever at about 37 miles long with little village and town settlements dotting the area. Hills and mountains overlook the azure blue waters and steep cliffs offering privacy. Why would you need privacy here? Well, Nugal Beach is a nude beach. But aside from that, Nugal Beach is particularly a beautiful spot because, after heavy rainfalls, the nearby northernmost cliffside becomes a cascading waterfall.

The Islands of Lewis and Harris are two islands in the Outer Hebrides portion of Scotland. Situated way up in the northern part of the country, where you’ll find Luskentyre Sands is on the island Harris. The drive to the coast sets the atmosphere with rugged mountains, wide open skies, and dramatic coasts, and sparse population make it almost feel like you’re part of another world. In fact, it feels so otherworldly that Stanley Kubrick used parts of the island as alien landscapes in his film 2001: A Space Odyssey.

Luskentyre Sands is on the western edge of Harris and the name itself is a bit of a mystery as the name translates to “headland fort” although no historic record of a fort has ever been found or established in the area. Despite what you might think about a beach in Northern Scotland, Luskentyre Sands was voted one of the best beaches in Britain and is surprisingly warm. The gulf streams moving up towards the Hebrides in the summer months make swimming and animal watching pleasant activities while the warm winds and waves make Luskentyre Sands one of the best surf spots in the U.K.

Located in the Province of Messina, Cala Tonnarella in Sicily is your escape from the hustle and bustle of other tourists. There’s no doubt that Italian beaches are very popular with tourists and locals alike so while places like Capri usually top the list for Italian beaches, consider heading to Sicily instead. Enjoy the hot afternoon sun without having to fight off other tourists to get a spot in the sand at Cala Tonnarella. The beach is secluded and free from crowds so might be asking yourself “why?” “what’s the catch?”. Well Cala Tonnarella is a bit of a trek to get to but it’s well worth it. The beach is located in the Zingaro Nature Reserve, which is inaccessible by road. So what you’ll have to do to get here is park your vehicle and hike for about an hour. But the hike itself is part of the journey with gorgeous coastal vistas, rolling green hills, and tranquility in an otherwise pretty hectic place. Finally once you get here, the little srtech of bone-white sand and Carribean blue water surrounded by towering limestone cliffs is an experience you won’t forget. Cool off from your hike and nap in the sand before heading back. It’s entirely possible you might have the whole place to yourself. 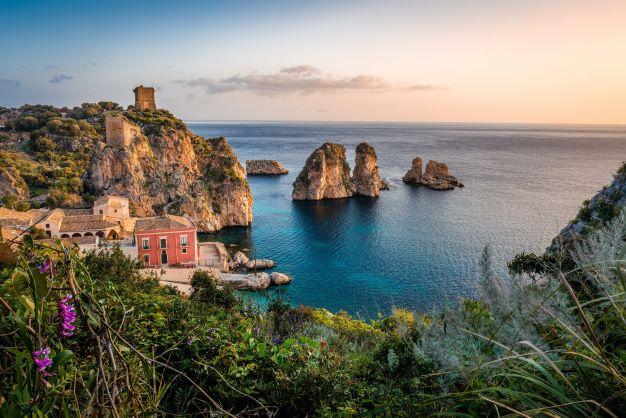 With a beach that inspired one of the finest artists in the world Claude Monet, there’s no doubt that Donnant Beach is one of the most beautiful spots in France. The island of Belle-Île-en-Mer is located off the coast of Brittany and is roughly 10 miles long and 5 miles by width and features plenty of gorgeous geological features such as sharp cliff edges, beaches, grasslands, and unspoiled wilderness. The island experiences a temperate Mediterranean climate with warm summers and the population of the island tends to swell with people visiting their summer homes on Belle-Île-en-Mer. And since the island has been inhabited since the bronze age, the current people who live there, weren’t the first to want to spend time on its shores. Donnant Beach is set within a cove with sand dunes covering the space and since the beach is western facing, it makes for incredible sunsets. While the area is big in the summertime, head to the tip of the peninsula where you’ll be enclosed by cliffs and dunes, and where the nature feels a little more untouched.

While there are plenty of white sandy and sunny beaches in the Mediterranean, when it comes to Spain, some of the best beaches are in the Northwestern region of Galicia. Islas Cíes is part of an archipelago off the coast of Galicia and since 1980 the entire island has been a dedicated nature preserve which is what makes this European beach a very unique one. There are no hotels or cars on the island though there is a small market, and a visitors center that caters to tourists as Islas Cíes is still a popular beach destination. Camping is permitted on the island but there are no garbage cans so every visitor is required to take their refuse with them when they leave. Aside from the boats in the distance and maybe a few other visitors, staying on Islas Cíes means hearing and seeing nothing but the waves, the seagulls, and the wind. If you’re the outdoorsy type, don’t forget to reserve a spot on the campground for a once in a lifetime opportunity to camp on what feels like a deserted island.

Since the Paleolithic age, people have been living on the island of Crete and if you lived here too, you probably wouldn’t want to leave it either. While most of the island is mountainous and very popular with tourists, beaches still make one of the top reasons to come visit Crete and there is no more instagramable place than Elafonisi Beach. It’s got all the love and attention of a high-profile beach such as a parking lot and washrooms while feeling like a remote oasis thanks to its distance from major cities. The shimmering blue waters and shallow tide make walks on the beach a fine way to spend an afternoon and if you haven’t snapped a few pics already, the pink-hued sand here only adds to the many reasons to visit Elafonisi Beach.

Yes, we have wonderful beaches, but Europe has such a wide variety that it is hard to beat.  Whether you want to head above the arctic circle to Norway or the Mediterranean, take a couple of days and head to the beach.  It really is wonderful.