Joseph Parker has now won 30 of 32 professional fights, while Derek Chisora suffered the 12th loss of his career

Parker, who gained a controversial points victory in their first bout in May, made a great start, with Chisora having to take a count in round four.

Chisora was knocked down by a brutal uppercut in the seventh but showed good character and bravery to continue.

The Briton took another count in the eighth, but made it to the final bell.

For 29-year-old former WBO champion Parker, this was a vital victory as he looks to get back to world title level.

But for Chisora, 37, it is hard to see where he goes now, with this being the 12th defeat of a 44-fight career, although he showed incredible spirit, heart and determination to get through to the end of the contest. 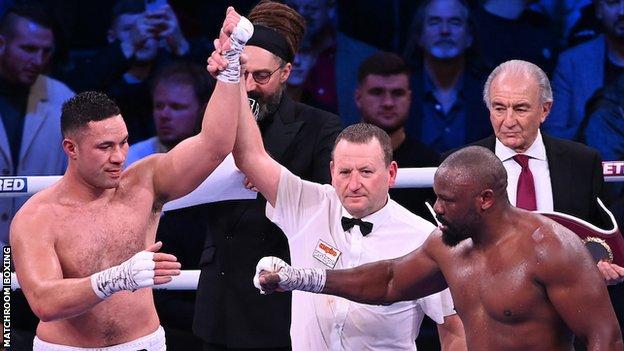 ‘Chisora is a credit to boxing’

“Derek always comes for war, he was one tough guy and never stopped coming forward until the end,” said Parker.

“We practised and practised that uppercut. What a Christmas present.

“I felt a lot stronger. It was important to start strong and not be negative from the beginning. You can see there are improvements to be made.

“Derek Chisora is a credit to the sport of boxing. The crowd went mental when he walked out. They just want to support him.”

Asked if he would like to see Chisora retire from boxing, Parker replied: “Personally I’d like to see him walk away.

“He has given boxing everything he has. The atmosphere is amazing when he fights. I’d love to see him walk away but that’s his decision.”

This was a repeat of their fight from seven months ago, which was also held at the same venue, but behind closed doors because of coronavirus restrictions.

In that bout, Chisora knocked Parker down in the opening 10 seconds of the first round, before Parker recovered and ended strongly on his way to a controversial split decision points win.

Now, in front of a large, passionate crowd in Manchester, the majority of fans were cheering for Chisora, but Parker made a superb start, twice landing right-left combinations and a powerful overhand right inside the opening round.

Chisora had success in the opening seconds of the second, but it was not long before he was tagged again by an aggressive Parker, who connected with a stunning uppercut, then another big overhand right hand before a sustained attack forced Chisora back on to the ropes, taking punishment.

In the fourth, Chisora took more punches but also the first of three counts when he was held up by the ropes, although he ended the round the stronger.

But Parker continued to have the better of the exchanges, utilising the uppercuts in the fifth and landed a superb jab, left hook, long right combination in the following round.

An uppercut knocked Chisora to the canvas in the seventh, but once again he ended the round on the attack, with Parker momentarily looking in a bit of trouble.

Chisora, for the third time, had to take a count in the next round after being caught by another right uppercut and then losing his balance and touching down with a glove on the canvas.

With Chisora again in trouble in the ninth, it appeared that referee Howard Foster was about to jump in and end it, before the Briton once more dug deep to stay in the bout.

After the 10th round, Parker’s trainer Andy Lee told his fighter “you’ve won the fight, you just have to stay focused” and, despite Chisora doing everything he could in the last two rounds, he could not send Parker down.

Promoter Eddie Hearn, speaking on DAZN, said: “Derek Chisora is not human. How that went 12 rounds I’ll never know. There was zero quit in him. Both those guys deserve a huge amount of credit.

“It’s a great performance. Chisora is a prize fighter, I’m sure he’ll be back. Parker has positioned himself. The career’s alive and kicking for Joseph Parker.” 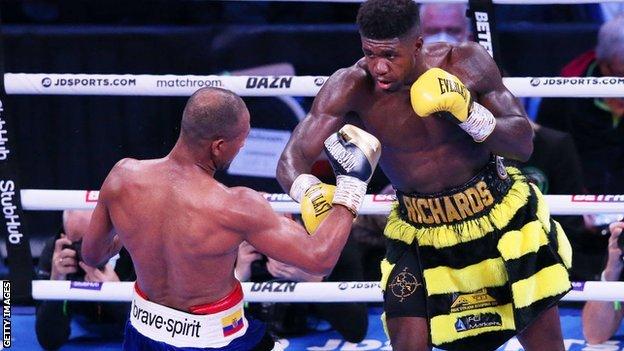 Lerrone Richards has won all 16 of his professional contests

Richards, 29, had already held Commonwealth, British and European belts at the weight and got the decision on two cards by a 115-113 margin, with the other judge scoring it 116-112 to Gongora.

Richards relinquished the European belt to fight Gongora and Britain’s Jack Cullen was then fighting for that belt.

However, he suffered a sixth-round loss to France’s Kevin Lele Sadjo, a late replacement.

Cullen suffered a cut over his left eye in round two after a clash of heads but was then floored by a left hook to the body in the sixth round. The Briton just about got to his feet in time, but the referee then called the fight off. 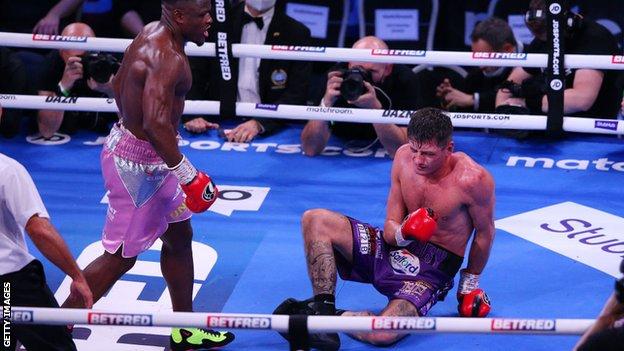 Manchester’s Zelfa Barrett should fight for the IBF super-featherweight world title against Japan’s Kenichi Ogawa in 2022 after beating Tanzania’s Bruno Tarimo in a final eliminator.

Croatian heavyweight Alen ‘the Savage’ Babic maintained his perfect professional record with his 10th win, all inside the distance, as he gained a sixth-round knockout win against France’s David Spilmont, despite being in trouble in the second round.

Find out how to get into boxing with our special guide.

In Case You Missed It

OR Tambo jet fuel crunch set to be over by month end, says oversight committee

Why Are U.S. Officials Bragging About Acts of War Against Russia?