Four thousand years ago, the finest gold items on Earth belonged to the nomadic groups that roamed the mountainous lands between the Black and Caspian Seas. These communities herded animals for a living, but they also mastered gold working long before most societies. Their elites flaunted that bling, especially in their tombs, which were loaded with golden goblets, jewelry and other treasures. Word of this gold-rich land spread and spawned tall tales from faraway lands, like the ancient Greek myth of Jason and the Golden Fleece. In most versions of the legend, the hero and his crew brave a perilous journey to retrieve a magical ram’s gold-colored wool from Colchis—what is today the country of Georgia in the Caucasus Mountains.

But, according to new research published in Scientific Reports, gold fell out of fashion in the Caucasus and remained unpopular for at least 700 years. Analyzing more than 4,500 artifacts, discovered by archaeologists over the past 130 years, a researcher showed that gold items became rare across a large swatch of the territory between 1500 and 800 B.C.E. The locals seem to have decided, then, that gold was gaudy.

“This paper is important… because it reminds us that our values are not universal. Even something we tend to regard as a global commodity—that is gold, the allure of gold—is not universal in space and time,” says Cambridge professor Marcos Martinón-Torres, an expert on ancient metals who was not involved in the research.

And that shift may reflect more than fashion whims. The archaeologist behind the research, Nathaniel Erb-Satullo of Cranfield University in the United Kingdom, thinks the gold decline resulted from elites losing status. Perhaps, average folks decried the one-percenters of their day, and ostentatious markers of wealth, like gold adornments, went out of style. Down with the rich and their riches.

“I’m not saying it was a totally flat social hierarchy,” explains Erb-Satullo. But he sees a “turn away from glorification of the individual person.” 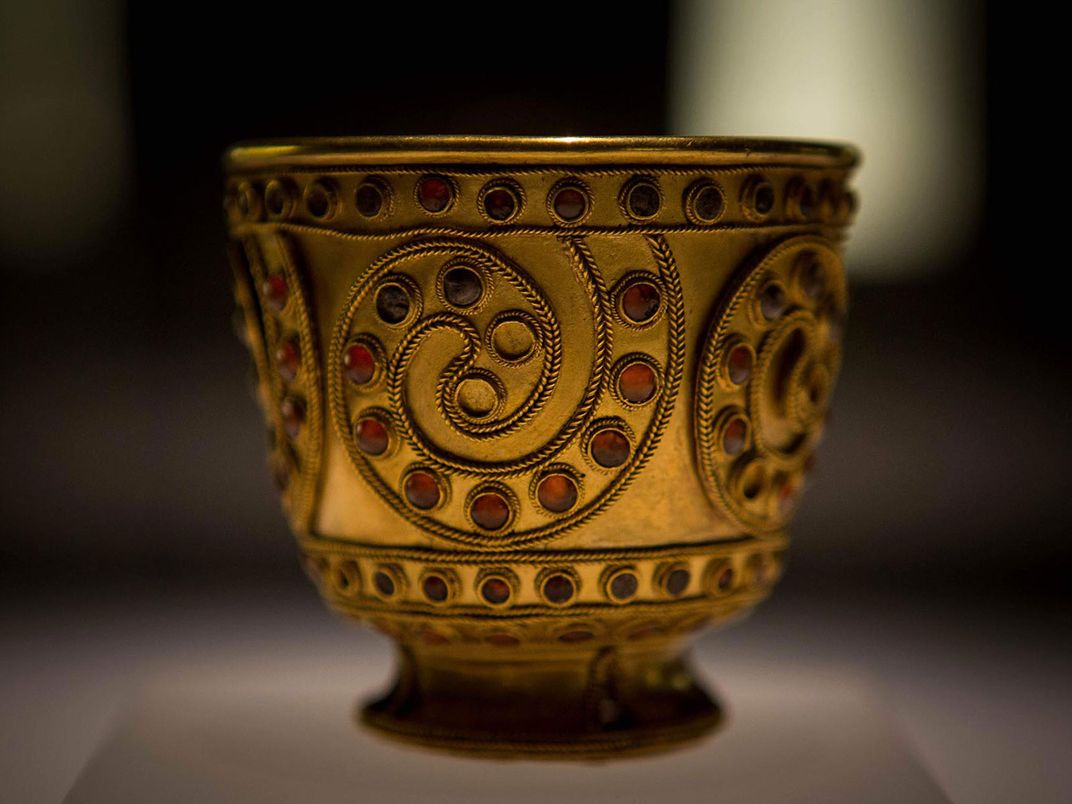 Goblet from a burial mound dating to the second millennium B.C.E.

Erb-Satullo’s study began as an offhand observation. In the mid-2010s, while working on archaeological digs in Georgia, he would visit regional museums in his spare time. He would gawk at their collections of exquisite gold artifacts but began to notice a gap in the ages of these items. The exhibits showcased “lovely early gold,” mostly made between 2500 and 1500 B.C.E., during the Middle Bronze Age. They also displayed relics from 800 to 200 B.C.E., when Classical Greeks explored the region and concocted the tale of Jason and the Golden Fleece. But Erb-Satullo rarely spied artifacts from the intervening period, 1500 to 800 B.C.E., during the Late Bronze and Early Iron Ages.

Chatting with Georgian colleagues, he learned that others had casually noted this apparent gold gap, but no one had seriously investigated it. Possibly, metalsmiths did craft gold during the Late Bronze and Early Iron Ages, but archaeologists haven’t yet discovered the sites where it’s buried. However, Erb-Satullo was intrigued by an alternative explanation: Communities in the Caucasus might have lost their gold lust for nearly 1,000 years.

To determine if the apparent gap signified a real drop in gold working, he decided to build a database of all known gold artifacts from the southern Caucasus—which date between 4000 and 500 B.C.E. That meant searching beyond the flashy items in museum displays. In 2019 he began scouring published reports from archaeological digs that occurred in present-day Georgia, Armenia or Azerbaijan, from the late 1800s, onwards. By late 2020 his database comprised 89 sites and 4,555 gold objects, including cups, figurines, beads and fragments of gold sheet, which likely covered wood objects that decomposed long ago. Erb-Satullo charted how these artifact counts varied across time, by geographic zone and based on a site’s distance from gold ore deposits.

The casual observation he’d made, that Georgian museums rarely had gold items from between 1500 and 800 B.C.E., reflected a real decline in gold working during that time. Specifically, the drop occurred in the so-called Middle Kura zone, the northeast corner of the region. Middle Kura sites, dated between 2500 to 1500 B.C.E., yielded a whopping 1,209 gold items. But the count plummeted to just 29 objects in the next period, 1500 to 800 B.C.E. That’s despite the fact that archaeologists have excavated thousands of graves from the latter period. These burials contained fine items, crafted from bronze, carnelian and other precious materials. Gold was just conspicuously rare. Meanwhile, gold counts remained high at sites outside this zone, to the south. These communities continued packing their tombs with gold splendor, as Middle Kura groups eschewed the metal.

The study “brought tons of data together to really make the case that some people in this one particular area were actually choosing not to engage, or choosing to reject a previous technology,” says Catherine Frieman, an archaeologist at the Australian National University, who served as a peer reviewer for the study.

It’s difficult to know why these communities rejected the lustrous metal, embraced by their predecessors, neighboring contemporaries and local successors. They left no written records explaining this turn—writing didn’t yet exist in the Caucasus region.

But Erb-Satullo gleaned clues from other archaeological remains, which indicate social transformations during the Bronze and Iron Ages. When gold-working peaks, between about 2500 and 1500 B.C.E., evidence of permanent settlements in the southern Caucasus is sparse. Most communities seem to have been nomadic herders. Some members of these groups apparently attained high status and wealth, based on the size and contents of their tombs—located in constructed mounds that could span a football field in diameter and reach 30 feet high.

These nomadic elites “were definitely decked out with wealth,” says Erb-Satullo. It’s “when these massive burial mounds appear that we start to see the first real kind of social hierarchy emerge.”

But around 1500 B.C.E., lifestyles and preferences changed. More groups settled into villages, often protected by hilltop fortresses. Graves became more modest, compared to the enormous mounds of prior generations. And gold bling nearly disappeared in the Middle Kura zone.

It’s unlikely that artisans depleted their natural supply of gold. The southern Caucasus holds more than 100 known gold deposits. Nearly all the archaeological sites in the study were within two days walk from one or more of these sources, based on Erb-Satullo’s estimates of by-foot travel time across the rugged terrain. Plus, prolific and sophisticated gold working reappears in the Middle Kura zone towards the end of the first millennium B.C.E. There’s no indication the area experienced a gold shortage.

Together, these clues suggest the upper class scaled back their most egregious displays of wealth. The social hierarchy may have leveled somewhat. Or, perhaps high-status individuals just quit flaunting their riches. Either way, the social turn against gold was unique to Middle Kura residents. Groups outside this zone continued burying their dead with gold bling.

Beyond the Caucasus, the study adds to understanding of the global history of technology and innovations, like metalworking. It provides a rare example, in which a society decided to abandon technology that they had developed and embraced centuries before. The reason such cases are rare: “It’s hard to study the rejection of innovations. It’s hard to study people who aren’t doing things because, by definition, the evidence isn’t there,” Frieman explains.

When scholars only focus on successful innovations, they make it seem like technology invariably advances in a linear progression from simple to complex—from sticks and stones to iPhones. But 3,500 years ago, in the Caucasus, communities decided to abandon the (then) cutting-edge industry of gold working.

According to Martinón-Torres their choice shows, “the history of technology is not even linear. It’s much richer and much more colorful, with ebbs and flows that vary depending on the individuals’ social and cultural context.”