by S. Publisher
in Gaming
0

Roblox is a virtual world-building platform that stimulates the imaginations of millions of kids and adults alike all over the world. Never before has it been so easy to jump into thousands of fun and unique games with friends all while using the same avatar across experiences. And for the most ambitious players, you can even download Roblox Studio and make your own games to share with friends or the entire world.

And the best part about Roblox is that it’s entirely free across PC, mobile, and Xbox so there’s nothing stopping you from hopping on to play some games. Honestly, the metaverse has already arrived and its denizens have blocks for heads.

When you’re done bringing your ideas to life virtually in Roblox, you can actually hold and use real Nerf guns based on the Roblox worlds you already know and love. For this line, Hasbro created unique blasters based on iconic Roblox games. 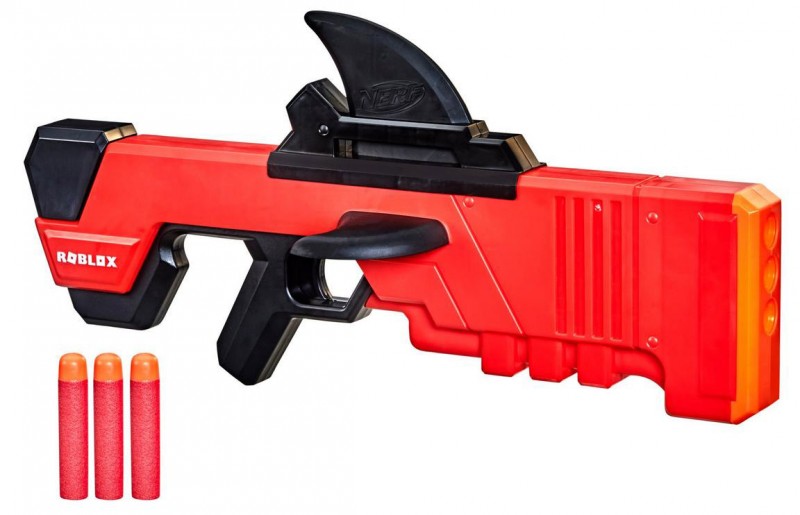 Some players are marked as “Innocents” who must hide and survive for the duration of the game while one other person is marked as the “Sheriff” and can take down the Murderer before any Innocents are taken out. It’s a clever game that involves lots of trickery.

The Shark Seeker Blaster is an awesome toy thanks to the stylish and original design. You can mash down on the fin placed on top to prime the blaster after loading a dart in the chamber and feel the satisfying click as you fire off shots. Each blaster comes with three Nerf Mega darts so you should have enough ammo to hold your friends at bay and keep them on their toes before needing to reload.

Nerf Roblox Adopt Me!: Bees! Blaster
Next in line is the Bees! Blaster, based on the insanely popular Adopt Me! game in Roblox, which has been played over 26 billion times by Roblox players all over the world. In the game, players get to adopt adorable animals, decorate their houses, and hang out with friends online in a simulated world that’s free from the stress and responsibilities of real life.

The blaster based on this game is stylized to look like it was just dipped into an oozing beehive that’s dripping with honey. The orange honey mold across the top is drenched in an aesthetic that really elevates this Nerf blaster’s style.

If the visual attention to detail wasn’t enough to sell you, the Bees! Blaster is primed for battle for anyone looking to unload some serious firepower. With an 8-dart rotation drum, you can fire off enough darts to take down a whole squad of your friends without ever needing to stop and reload. You just have to move the lever before each shot to rotate the drum and prepare the next shot. 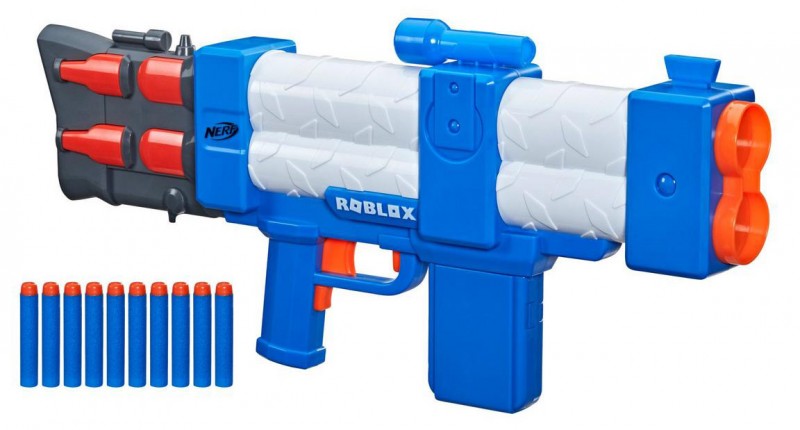 A lot of Roblox games are based on roleplaying or simulations, but Arsenal is just a straight up frag fest that hearken back to the glory days of classic first-person shooters on PC. It’s fast, frenetic, and fun gameplay minus all the blood and violence. In fact, it’s a bit like a virtual Nerf blaster fight without the need to clean up all the darts afterward. That’s a win-win scenario!

The Pulse Laser Motorized Blaster steps things up a notch by including a removable 10-dart clip that loads into the bottom of the blaster. With its motorized action, you’ll need to supply your own set of four AA batteries to get the full effect. The rapid dart feeding system means you can shoot off all 10-darts in rapid succession before you ever need to reload. 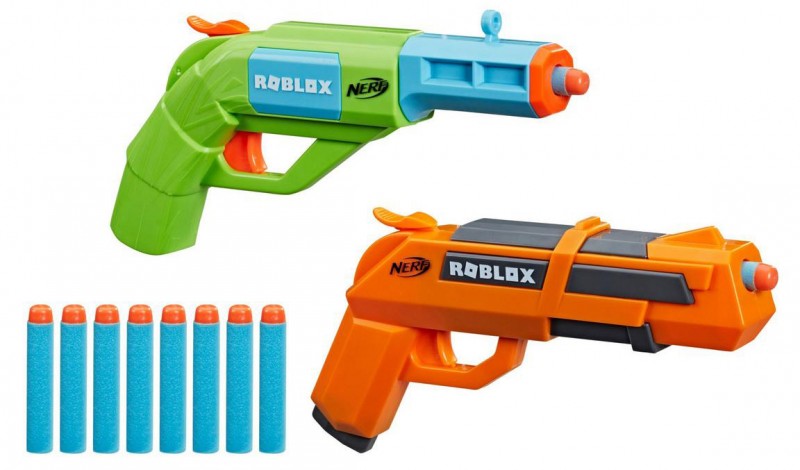 Nerf Roblox Jailbreak: Armory Blaster Set
The final Roblox Nerf item to discuss here is the Armory Blaster Set, which is of course based on the super popular Roblox game, Jailbreak. This is an award-winning Roblox game that already features big partnerships and license deals in-game, such as an upcoming event with NASCAR. This is definitely one that your kids (and/or you) are probably very familiar with already.

In Jailbreak, players can be either cops or criminals in an attempt to stop robberies or orchestrate heists depending on the role you’re assigned. The developers have continually worked on the game for nearly five years to add new content, update existing parts of the game, and keep things as fresh as possible.

Unlike the other blasters on this list, the Armory Blaster Set is actually two one-handed blasters in one tidy package. These blasters have a single chamber to load individual darts one-at-a-time and are primed with a hammer-action lever at the back before each shot. Just load a dart, pull down the priming hammer, and pull the trigger. The Armory Set includes two blasters and 10 Official Nerf Elite darts so you’ve got plenty of ammo to work with. Or, you can share with a friend, split the darts, and re-create a match of Jailbreak in your backyard.

Regardless of what type of action you’re looking for, whether it be handheld single-shot blasters or automatic motorized guns with loads of darts, the new line of Roblox-themed Nerf blasters has you covered.

And as a neat bonus, you even get a special redemption code that can be used to acquire an in-game item inside Roblox included with each of the blasters mentioned here! Now load up your blasters with Nerf darts, take aim, take cover, and have some fun!

Note: All Nerf blasters and darts are tested and approved for performance, safety, and quality. All toys shown here may be used either indoors or outdoors for children age 8 and up. To avoid eye injury do not aim at faces and protective eyewear is recommended (not included.) Small parts may present a choking hazard, so please keep out of reach at all times for children under 3 years.

Netflix Introduces 5 Mobile Games, including a Couple Based on Stranger Things