Great Game, Poor Performance – When Does A Bad Frame Rate Not Really Matter?

It seems that no game release is safe nowadays without frame rate graphs and resolutions being counted. That is fair enough, as games should ship in a competent and playable condition, but it’s easy to forget that we’re often spoiled in this modern gaming era. We gasp if gameplay regularly dips below 30fps, and with certain first-party (mainly) Switch titles and pretty much anything on PS5 / Xbox Series X|S, the expectation is often for a silky smooth 60fps. Oh, and resolution is supposed to stay high — we can’t be having fuzzy visuals.

Yet some of us of a certain age remember a time when a lot of games were, technically, rather messy. Perhaps it was in the ‘bit wars’ era of iffy arcade ports, or even console exclusives that would have slowdown as a dramatic ‘feature’. Oh and if you were a Nintendo 64 owner in PAL territories, you got used to pretty much every game feeling slow, and even the best games were prone to significant dips. Seriously, fire up the classic GoldenEye 007 nowadays and check out those frames, especially in multiplayer. It’s brutal.

But actually, it’s still fun. The thought for this article came up when playing a Switch game that dropped to extraordinary frame rate lows, yet I kept playing. And so a few members of the team have pitched in with games they play and enjoy despite their cardinal sin of not actually running well. Because a game being entertaining doesn’t mean it has to be perfect.

In fact, in some of these examples, they’re far from perfect.

This thought came to me recently, after I’d crumbled and used some long-overdue Birthday money to pick up Marvel Ultimate Alliance 3: The Black Order in the eShop Cyber Deals; I even bought the expansion pack because why not. Because of the mixed things I’d heard about the game, 33% off maybe wasn’t enough, but then I remembered it was published by Nintendo so that discount is about as good as it’s going to get.

There were reasons not to buy it, of course — I’m playing it almost exclusively in single player, and in portable mode, and a ‘One Year Later’ review I watched said the grind to level up characters was very real. And yet, I couldn’t resist. I enjoy the current Marvel films and TV shows, but I have treasured childhood memories of the ’90s era cartoons, in particular X-Men and Spider-Man. They were the business, and when I saw that the game seemingly adopted that style (visually and in some storytelling) I had to have it. 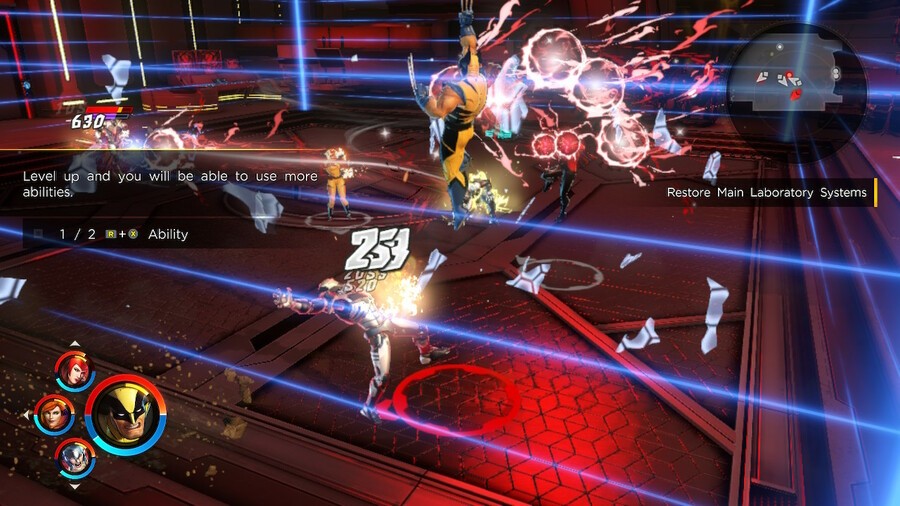 The frames will be defeated (Image: Nintendo)

The good news is I’m having a good time despite its flaws. The cutscenes are brilliant, I’m about two thirds through the initial campaign and have been dabbling in some of the easier challenge missions and add-ons. You tap buttons, use special moves and watch madness happen, and it’s good silly gaming. Most of the levels have fantastic throwbacks and references, and there’s zero doubt that the developers were more influenced by comics and cartoons than the blockbuster films. One level I’ve done so far was pretty irritating, but it’s a game where I find it easy to work past its flaws. And the X-Men level — oof, so much good nostalgia.

All of the button tapping and on-screen shenanigans push the Switch hard, especially in handheld mode. It was when tackling a ‘Danger Room’ (or something, there’s a bunch of modes) when I nearly broke the game. There were a bunch of big enemies on the screen and the gimmick was you could throw explosive cores to kill them quickly. Screen-filling enemies + multiple explosions = broken frame rate.

I could almost hear the CPU and GPU creaking and I was down to single digit frames in the final stretch of about 20 seconds. It was hard to see what was happening but I kept tapping buttons, even adding a special combo-mega-attack-thing to punish the Switch further. The countdown ended and… I had won, somehow.

It was gameplay that, if captured and presented by Digital Foundry would be absolutely shredded by critics. And yet I regret nothing. It was fun, even though it probably shouldn’t have been. 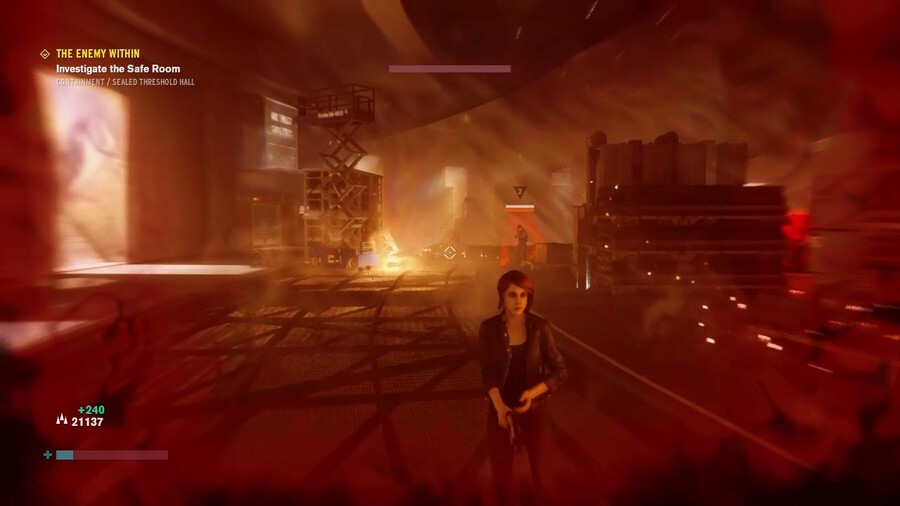 You’ve got red on you (Image: Remedy)

I’m pretty un-sensitive to frame rates and resolutions, so a game has to be really bad for me to notice! That said… Control (Cloud Edition) had a lot of egregiously fuzzy bits because of the nature of the cloud streaming.

Compression apparently handles red-on-red very poorly, and Control has a lot of red. There were some fights that were a bit like trying to find your keys in a bowl of tomato soup with your face. Still, the game is extremely good, once you’re back in the light! 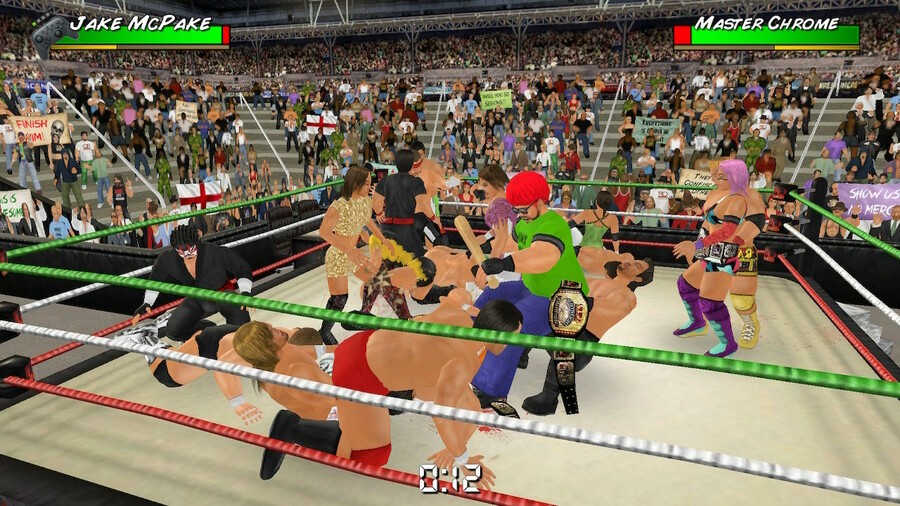 Wrestling Empire is a hard sell. On still images it looks like something running on a fifth generation console. Giving the free eShop demo a chance may still be unconvincing due to the virtual wrestlers themselves struggling to even run properly to the ring without tripping over themselves. Yet this game keeps shining brighter and brighter thanks to 10 months worth of continuous updates by one-man: developer legend Mat Dickie.

Major bugs have all been ironed out but on occasion everything still goes horribly wrong and, when it does, I can’t help but laugh out loud at the on-screen absurdity. A price one must pay for the very first wrestling video game ever to allow thirty (fifty on PC!) wrestlers on screen at once, leading to a massive performance drop but unbelievable, absurd carnage both in and out of the ring.

Wrestling remains one of the few annoyingly sparse genres on Switch but thanks to Mat Dickie’s magnum opus every other attempt on the system by AAA developers just pales in comparison. A case of not judging a book by its cover, or for a more accurate description, the stumbling Sting facsimile attempting to setup a top turnbuckle missile drop kick into the announcer’s table only to botch the spot and fall haplessly back onto the canvas. Ouch! 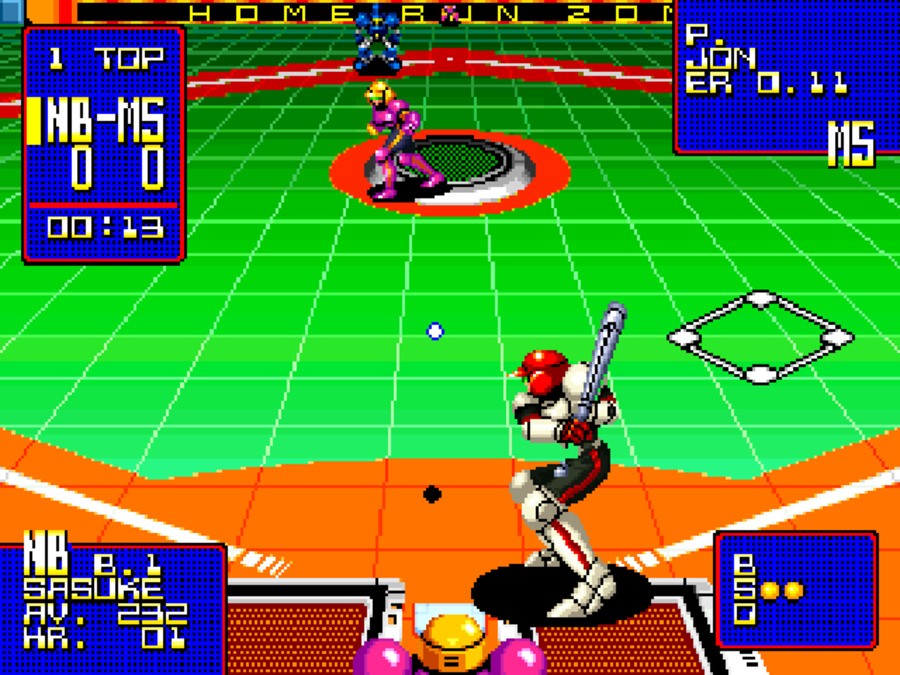 This is EXACTLY what Baseball was like last year (Image: SNK)

The name Super Baseball 2020 implies a bold proclamation: by the year 2020, all professional sports will be a literal pay-to-win spectacle performed by a litter of cybernetic avatars, ornate in homage to the past, but with the freakish super powers of the future.

In this version of 2020, headbanging throngs of blurry human flesh scream at the shiny and wildly attractive robots attempting — with foregone futility — to field baseballs hit towards them at 200 mph. They instead blow up after stepping on random landmines buried all over the outfield. In the future, onlookers have become accustomed to patiently waiting for pop-flies with 20-second hang times. Starting pitchers uniformly tire by three innings, unless the manager pays a few hundred bucks to enhance them. (They can use the money the umpires slip them mid-game.) Base-running is impossible.

This cacophony is my favorite digital interpretation of baseball. Baseball, after all, is a game of extreme nuance that has never translated particularly well to video games as a whole — only in pieces, as every swing of a Wii-mote reminds us. Thanks to Switch’s retro offerings here in the year 2021, I can easily return to this terrible NEO GEO arcade classic, as I’ve done time and time again going on 20 years. Why? Because despite the buttons that don’t really work, the rigged gameplay, and the non-existent balance, it’s stuck with me as the most fun version of hitting a ball around that I’ve ever played.

I find that irony kind of fitting. After all, time isn’t a factor in baseball: you just keep playing until you fail the least. 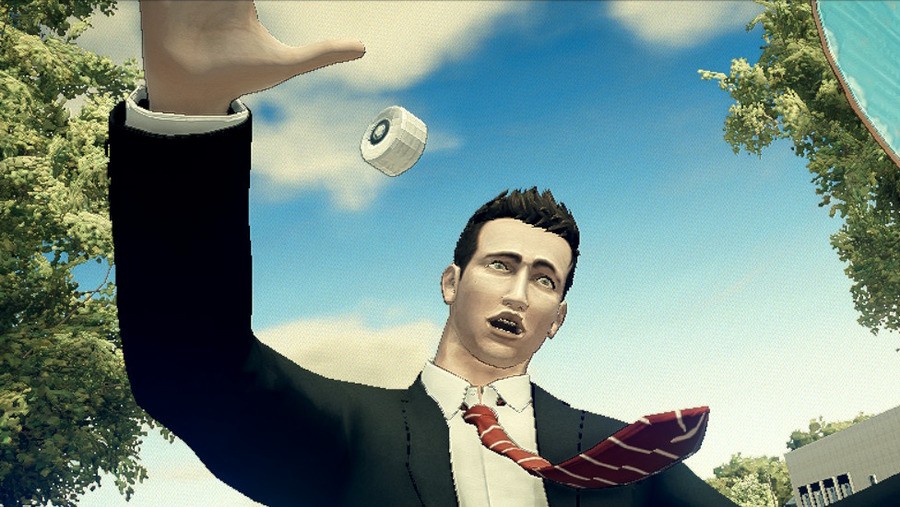 When Tom first posed this question, I had a hard time coming up with an answer because *adjusts tie in a smug fashion* I only play the good video games. No, but seriously, if I hear that a game is afflicted with terrible performance issues, I’ll typically steer clear, at least until patches arrive. It’s not like there’s a paucity of great software to play.

My greatest memories of dropped frames and stuttering gameplay mainly centre around 8- and 16-bit titles that ground to a halt when there were too many sprites on screen, but back then it was infrequent enough that I thought that was pretty rad, all told. Woah, this game’s so awesome my Mega Drive can’t even handle it!

But then it suddenly dawned on me – there could be only one answer to Tom’s poser. If you’ll permit me the impertinence of quoting myself, I’ve previously discussed the perfect example: Deadly Premonition 2.

As you play, you know that it’s a woeful underperformer on a technical level. You observe the slowdown and pop-in and crude PS2-era animations and acknowledge them as objectively terrible…

And yet you keep playing. And you keep playing. You complete the game. You go back to the game when a patch upgrades the frame rate from ‘laughably atrocious’ to ‘plain awful’, and you carry on playing. Incredibly, your takeaway impressions aren’t sullied by its myriad shortcomings; legitimate technical criticisms are like water off Deadly Premonition’s duck’s back.

And like a duck, it’s ungainly, unsophisticated and hugely unimpressive compared to the magnificent video gaming beasts in the wild… but there’s something irresistible about it. We’re not sure we agree that the jank in SWERY’s off-the-wall horror series is somehow necessary or part of the charm, but the fact remains that we came away from Deadly Premonition 2 filled with a deep and warped affection for it.

So there you have it: Deadly Premonition 2 — the worst-performing game that I’ve had a great time with.

Those are some of our picks for good games with bad frame rates / performance, but we want to know which games you love in spite of everything they do to try and make you hate them. Be sure to share some of yours in the comments!