To be known as the second best “Ghostbusters” movie was never a badge of honor. Until now.

After the fantastic 1984 original, a New York comedy classic, came its dumb follow-up, “Ghostbusters II,” in which the city was attacked by angry pink slime and a talking painting. To almost quote Ray Parker Jr, it was something weird, and it didn’t look good.

Then in 2016 Paul Feig directed a meh all-women reboot starring Kristen Wiig, Kate McKinnon, Leslie Jones and Melissa McCarthy that made no money. Plans for more were quickly scrapped.

Well, it’s taken 36 years and six presidencies, but with “Ghostbusters: Afterlife” fans finally have an unembarrassing sequel to love. Director Jason Reitman’s soul-satisfying film, which surprised New York Comic Con on Friday night, harkens back to our favorite summer blockbusters of the ‘80s, even though it’s set in 2021, and pays homage to the original while feeling fresh and new.

Kind of like the 2018 “Halloween” starring Jamie Lee Curtis, “Afterlife” has selective amnesia and pretends that the movies after 1984 never happened. There is no mention of Vigo the Carpathian or any characters from the 2016 movie. Thank Gozer for that.

“Afterlife” instead takes place in fictional Summerville, Oklahoma, where there are no skyscrapers but the corn is as high as an elephant’s eye. After her estranged father dies, Callie (Carrie Coon) and her two teens Phoebe (Mckenna Grace) and Trevor (Finn Wolfhard) move to the town to deal with his creepy old farmhouse. Grandpa — and this is not a spoiler, as Reitman has discussed this extensively — was Egon Spengler (the late great Harold Ramis).

The small-town locale, not to mention the casting of Wolfhard, lends the movie an appealingly retro “Stranger Things” or “It” vibe. And leaving Manhattan for Main Street, USA (sounds like all my friends when they have kids) was the right call by Reitman. The original “Ghostbusters” firehouse was in Tribeca back when nobody wanted to go to Tribeca. Now the scariest thing about Tribeca is the cost of dinner.

In Summerville, Phoebe and Trevor learn that gramps abandoned his family and ghostbusting pals and became the town outcast who was working on a project connected to mysterious earthquakes there. When Phoebe, an aspiring scientist, and Trevor discover his proton packs, ghost traps, beige uniforms and famous Ecto-1 car, fans will go loco.

Together with a funny little sidekick named Podcast (Logan Kim) and their summer school teacher Mr. Grooberstein, they become an accidental new generation of Ghostbusters. 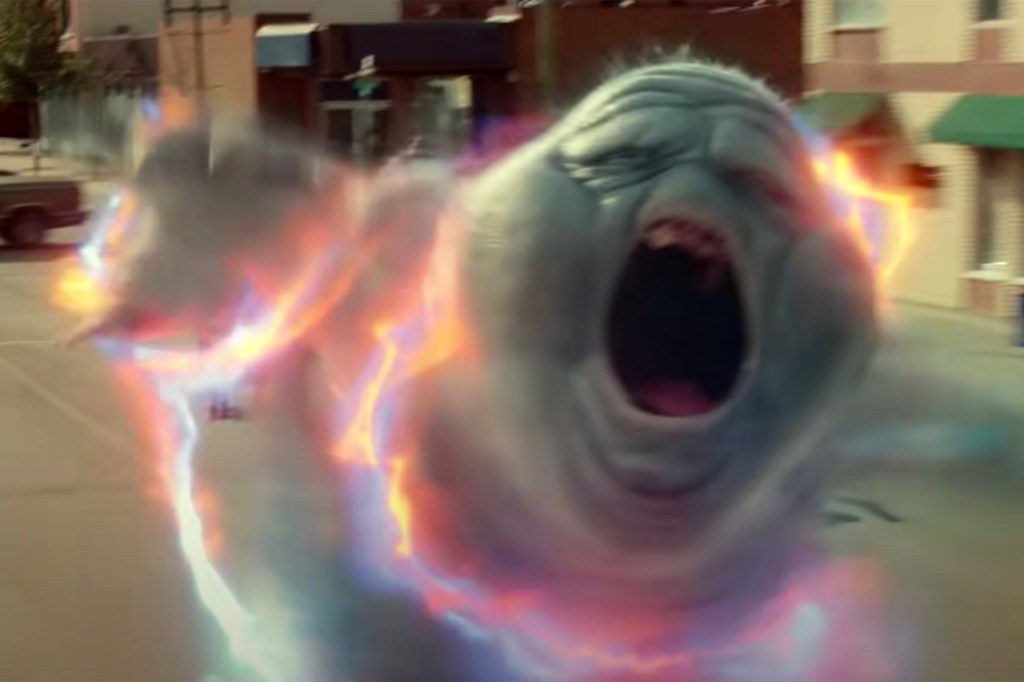 The ghouls are angry and green as ever in “Ghostbusters: Afterlife.” Columbia Pictures

Reitman, who just so happens to be the son of famed producer of the 1984 movie Ivan Reitman, is an accomplished director in his own right, having helmed the wonderful “Juno” and “Up in the Air.” He finds the perfect tone here, especially in how he uses composer Elmer Bernstein’s original music while Phoebe and Trevor tinker with Egon’s gadgets.

He’s also skilled at getting genuine performance out of young actors, as he proved in “Juno,” and balancing humor with stakes — essential for comedy-horror like “Ghostbusters.” The jokes are very funny and Wolfhard and Grace make life-threatening peril look like a ball.

The ending will be divisive, but I found it tastefully done. And throughout the movie, fans will be thrilled to be reunited with many familiar, hilarious faces.

I can reveal that as the credits roll, we hear the classic “Ghostbusters” theme tune that’s almost more famous than the actual movie at this point. You’ll be grateful that Reitman is a purist and did not end his successful sequel with “Who Ya Gonna Text?” by Billie Eilish.

Interesting Facts and Highlights of Magento

6 of the Greatest Arm Workouts for Women that Can Get You Real Results!