Davis Cup Finals: Spain out after losing to Russians in Madrid

Defending champions Spain were knocked out of the Davis Cup Finals after the Russian Tennis Federation clinched a dramatic late-night win in Madrid.

Success in the deciding doubles meant the Russians – favourites to win the 18-team event – topped Group A.

Their win also ensured Serbia qualified as one of two best-placed runners-up.

There was a sombre mood inside the Caja Magica in the Spanish capital as the home team, without the injured Rafael Nadal, were beaten at about 00:45 local time on Monday.

The Russians, competing under the name of their federation after the nation was banned from international competition for doping violations, are led by top-five ranked players Daniil Medvedev and Rublev.

Earlier on Sunday, Kazakhstan reached the last eight with a comfortable 3-0 victory over 2019 finalists Canada, while Croatia also went through at the expense of 28-time champions Australia.

Great Britain clinched their spot by fighting back to beat the Czech Republic to finish top of Group C.

Kazakhstan topped Group B after wins for Mikhail Kukushkin and Alexander Bublik in the singles, plus Andrey Golubev and Aleksandr Nedovyesov in the doubles.

They will now face Serbia, who are led by world number one Novak Djokovic and were given a helping hand by the Russians.

Croatia, who won the title in 2018, will face Italy in the first quarter-final on Monday.

The United States were eliminated after losing to Colombia, who finished second in Group E behind Italy.

That was not enough to finish as one of the best runners-up, with Sweden already confirmed and Serbia soon to follow. 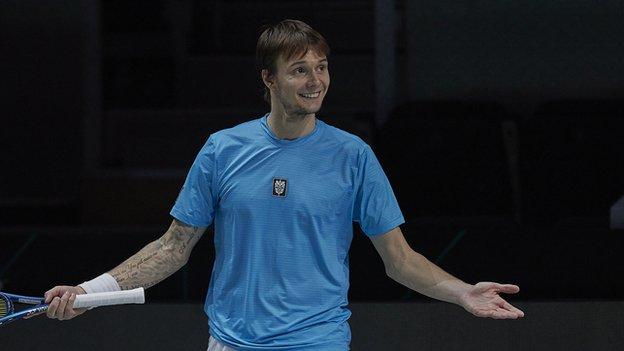 Kazakhstan’s Alexander Bublik, who had been booed by some fans in Madrid for an underarm serve, thanked the crowd afterwards for spurring him on

After last year’s event was cancelled because of the coronavirus pandemic, the Davis Cup Finals returns for its second edition with a slightly different feel.

The 18-nation finals, self-styled as the ‘World Cup of Tennis’, was held entirely in Madrid when it launched in 2019, but this year stretches across three cities – Innsbruck and Turin joining the Spanish capital as a host.

The semi-finals and final will be held in Madrid from 3 to 5 December.

Back From the Brink: Restoring Prairies With Fire