Tactile virtual experiences and hardware that lives with us – TechCrunch

5 Key Differences You Should Know 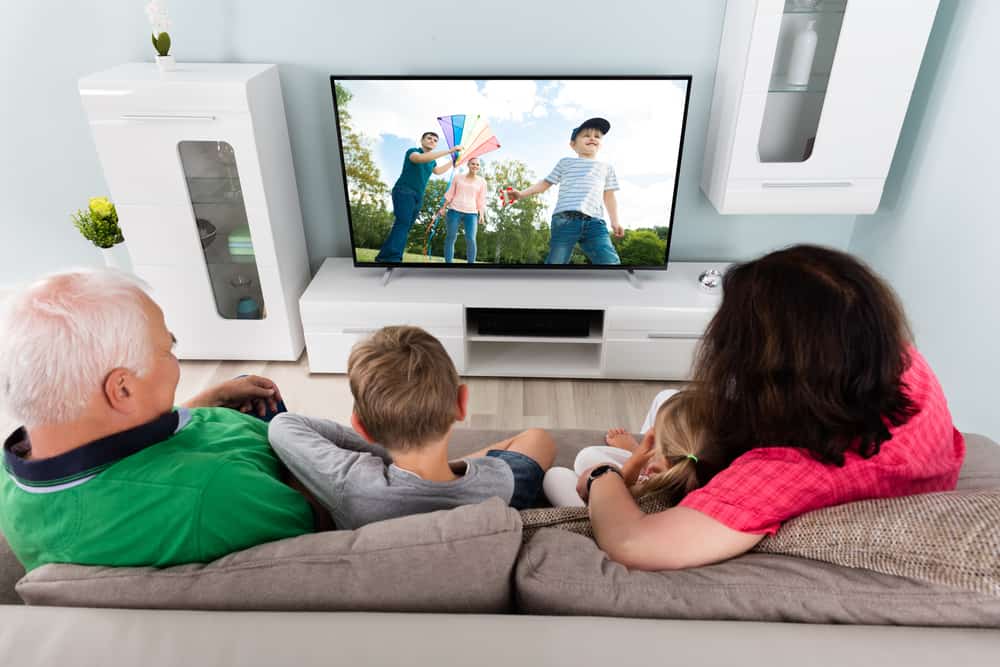 The Samsung RU7100 is a smart television that delivers satisfying performance. This television has good picture quality and excellent speakers, so you can get a premium experience when watching your favorite shows. The television, however, is not bright enough and is somewhat pricey.

Are you a fan of the Samsung television brand? If yes, I am sure you will be interested in this Samsung RU7100 review.

In this review, I will be discussing the specifications and features of the Samsung RU7100 television. The features of this television I’ll discuss include its design, display, sound, port and connectivity, and smart features.

Moreover, at the end sections where I discuss these features, I will offer the Samsung RU7100 a rating. This rating is on a scale of one to ten and is based on the performance of the television.

Since this article is an expert critique of the Samsung RU7100, you will also get to know its advantages and disadvantages. Thus, you will be able to make an informed buying decision if you think this television is worth your money. 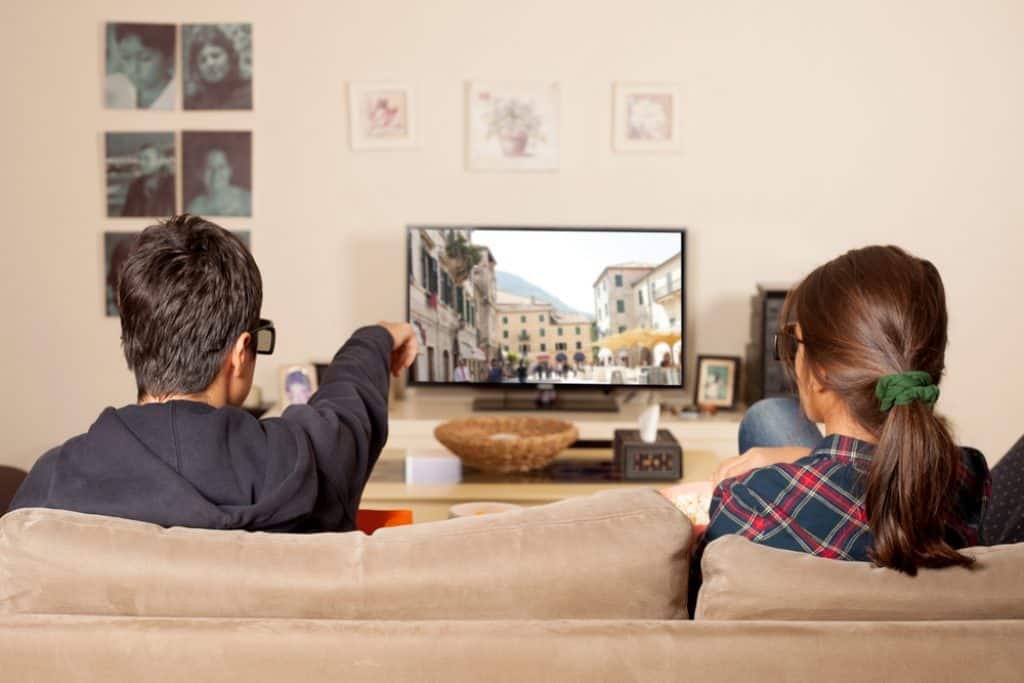 If not the best, Samsung is definitely one of the best television manufacturers in the world today. Although Samsung makes some pretty expensive televisions, their televisions sure do have the features to entice buyers.

A good example is the Samsung RU7100, which offers plenty of great features for a pretty expensive price. To be more specific, this television had an $849.00 price tag in November 2021 when I published this article.

However, performance is way better and important than any form of hype. So, let’s find out if the Samsung RU7100 is worth all the hype it has been getting since its release. 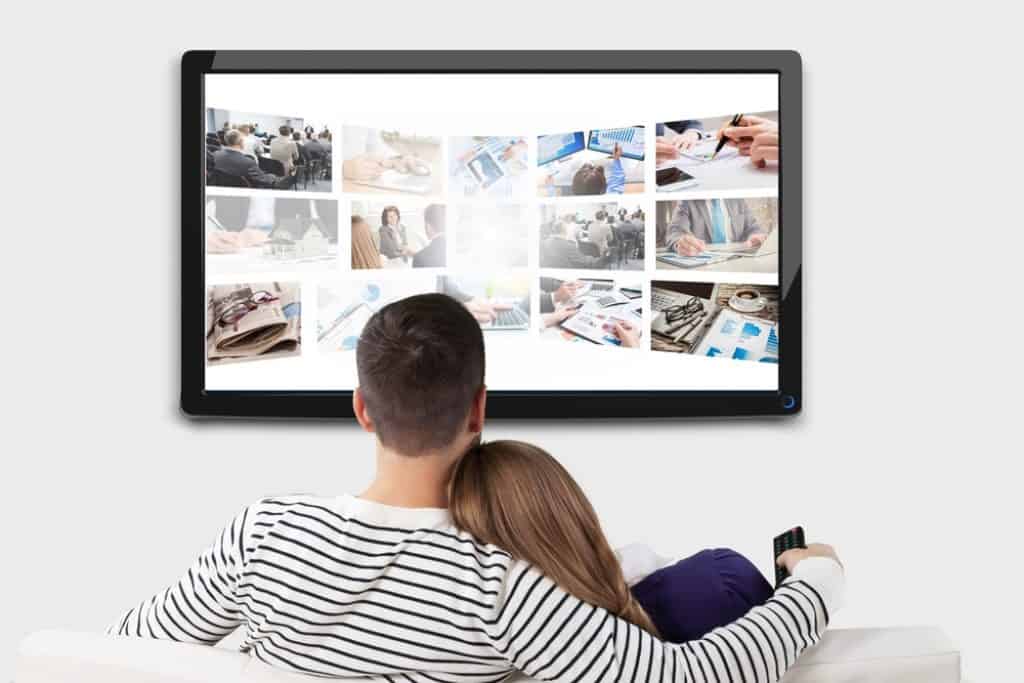 That said, the Samsung RU7100 comes with a pair of plastic legs that has a V shape. Moreover, these legs are really sturdy and should support the television pretty well.

However, if the Samsung RU7100 is poked, these legs won’t stop it from wobbling. Also, the legs are set wide to the edges of the television.

As a result, if you aren’t planning on wall mounting the Samsung RU7100, you have to get a fairly large table to put it on.

In addition to that, the back of this television features a lot of fine horizontal ridges, just like its predecessor. Furthermore, cable management is serviced through tracks found near the bottom of the back.

Therefore, the Samsung RU7100 will look just nice if mounted on the wall.

Therefore, I will rate the Samsung RU7100 a nine out of ten in this design review section. 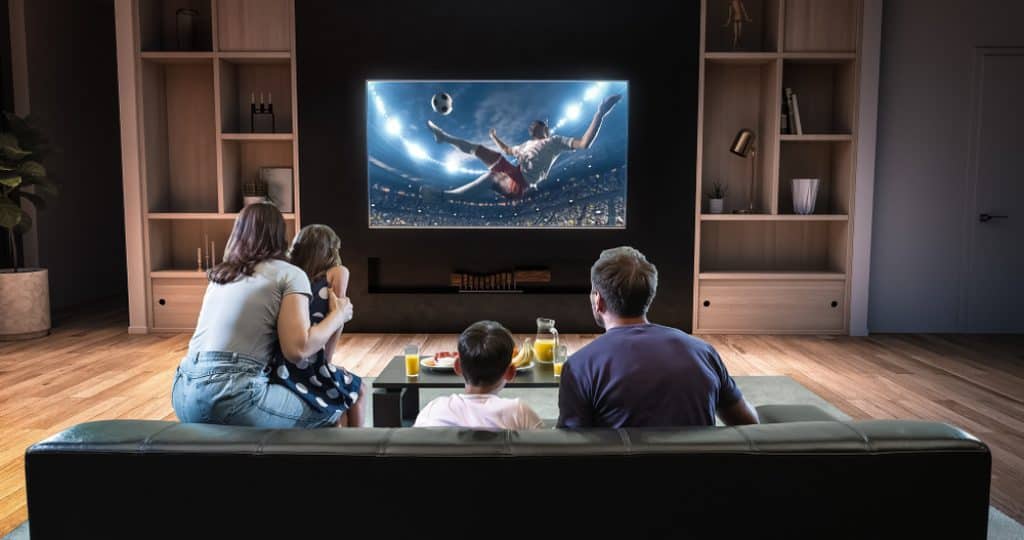 As most of us are aware, 4K screen resolution is one of the best resolutions a display could possibly feature.

This is because a display with 4K resolution often delivers sharp, crisp, and clear contents and images. Also, a 4K display is about 4 times better, sharper, and clearer than the typical HD display.

Therefore, as a display with 4K resolution, the Samsung RU7100’s 50-inch display should be able to deliver crisp and clear content.

That said, the Samsung RU7100’s 4K display has an impressively high contrast ratio of 5,650: 1. A display’s contrast ratio is the ratio between the brightest white and the darkest black that the display can produce.

As a result, the Samsung RU7100 is great for watching movies in a completely dark room. Also, this television is ideal for viewing movies with lots of dark and shadowy scenes.

HDR (High Dynamic Range) is a picture technology that boosts the contrast ratio of HDR content on a display. HDR content is mostly found on streaming apps like Netflix and Amazon Prime Video.

Awkwardly, despite supporting HDR and having an impressive contrast ratio, the Samsung RU7100’s display isn’t bright enough. To give more detail, this display has a maximum brightness of 289 cd/m².

Therefore, the Samsung RU7100 is best-suited in dim or moderately-lit rooms.

Hence, it is best you view the television directly from the center. Also, due to its disappointing display viewing angles, the Samsung RU7100 isn’t ideal for a large room setting.

That said, the Samsung RU7100 is a great television for viewing fast-motion content like sports or action movies. This is due to the fact that its display has an impressive response time of 7.7 milliseconds.

Response time is the amount of time that a display takes to converse from a particular color to another.

Moving on, the Samsung RU7100 is an adequate television for gamers. This is due to its display’s low input lag of 10.8 milliseconds.

What is the definition of an input lag though? The length of time it takes for a display to register input is known as input lag.

Additionally, the lower the input lag, the better the gaming experience.

In summary, the Samsung RU7100 has a 4K display that delivers decent picture quality and supports HDR. However, this display isn’t bright and has disappointing viewing angles.

Therefore, I will rate the Samsung RU7100 an eight out of ten in this display feature review section. 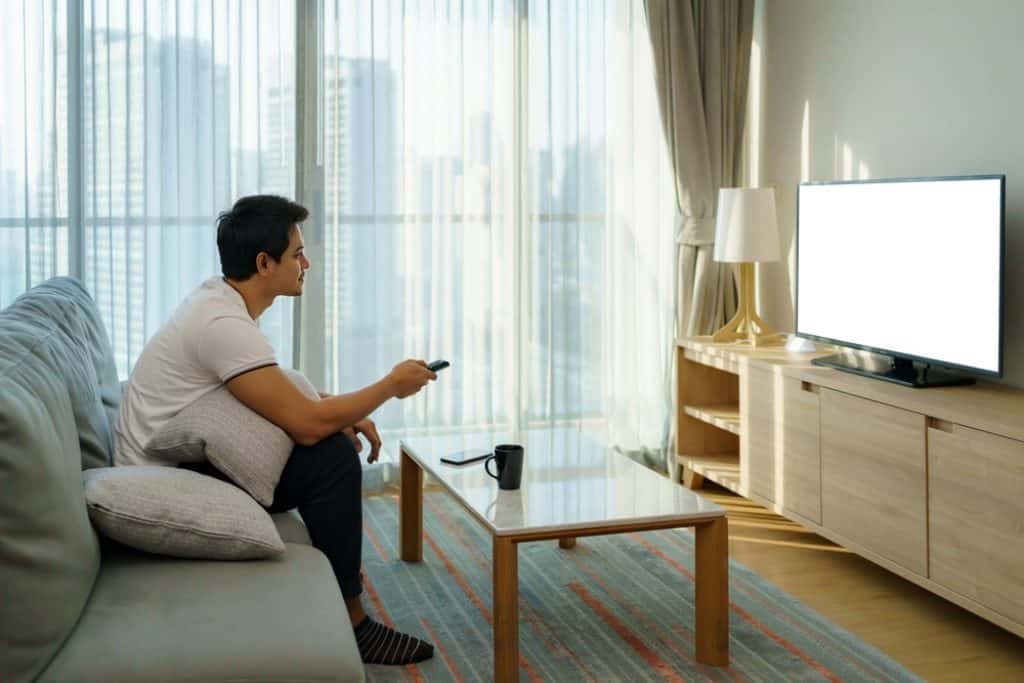 The Samsung RU7100 has two 20-watt CH speakers that offer a total of 40 watts of audio power. This results in high audio volume, with the speakers being able to fill a fairly large room.

Furthermore, for a TV without a subwoofer, the Samsung RU7100 has a remarkable amount of bass. Additionally, the speakers on this Samsung television produce crisp, clear, and very rich dialogue.

Dialogue can be defined as the audio produced when two or more people are discussing in a movie.

Moving on, the distortion performance of Samsung RU7100’s speakers is impressive. To be more specific, distortion will not be audible when the volume of the television is at a medium level.

However, distortion may be audible at maximum volume, but just a bit audible. The THD test results for the Samsung RU7100’s speakers proves this.

According to the THD test result which I got from rtings.com, these speakers received a score of 0.789 percent. THD (Total Harmonic Distortion) is a test that determines how much distortion a speaker or sound system can create.

In addition to that, a THD test score is frequently expressed as a percentage. Furthermore, distortion will be less audible if a speaker’s THD test result is less than 1%. 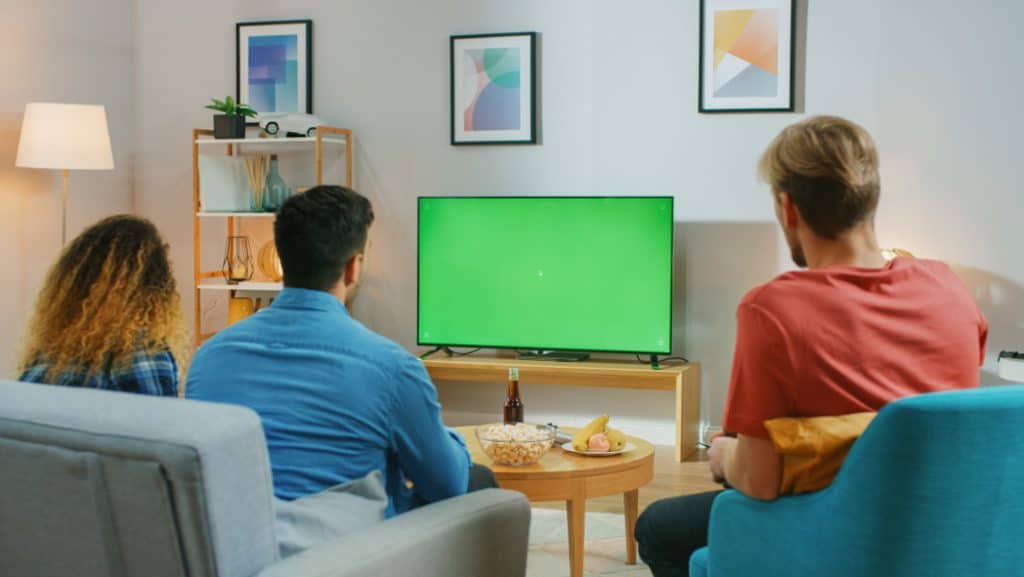 The only exception is the power cable connector that is located on the left side of the television’s back. The right-facing ports include a pair of USB ports, three HDMI ports, an optical audio output, and an antenna/RF connector.

It is worth mentioning that one of the television’s three HDMI port support ARC (Audio Return Channel). Therefore, the ARC-HDMI port can be used to connect a soundbar or any HDMI-supported external speaker.

That said, the Samsung RU7100 also features a set of composite video inputs and an Ethernet port.  In terms of wireless connectivity, this television comes with both Bluetooth and Wi-Fi Direct.

Specifically, the remote is long, made of plastic, and has a matte-black finish with a “Samsung” logo on the bottom. Furthermore, because this remote is long, it has enough space to accommodate a full number pad.

Additionally, the remote has three dedicated buttons for quick access to streaming apps like Netflix, Amazon Prime Video, and HULU. Unfortunately, despite being a pricey smart TV, the Samsung RU7100’s remote lacks a built-in microphone for voice input.

In conclusion, the Samsung RU7100 offers an ideal number of beneficial ports. However, the included remote control isn’t voice-supported despite the fact that the television is a bit pricey.

Therefore, in this port and connectivity section, I will be rating the Samsung RU7100 an eight out of ten. 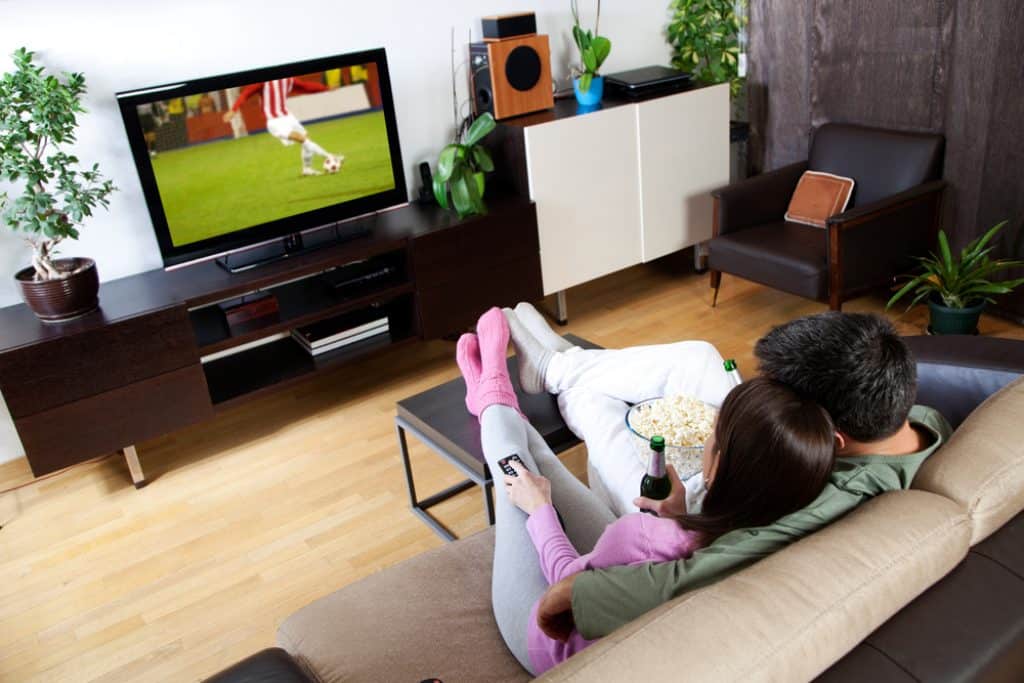 This Smart Hub interface is straightforward and free of bugs; thus, it should work seamlessly. Additionally, this Smart Hub has a horizontal navigational tile that runs along on the bottom of the television screen.

Impressively, the Smart Hub also features a full web browser that allows users to surf the internet using the television. Unfortunately, the Tizen OS, like the vast majority of smart OS, has ads on its home page (Smart Hub Interface).

To make matters worse, the ads cannot be turned off.

Moving on, the Samsung RU7100 supports voice control features through Google Assistant or Amazon Alexa. You will, however, need to acquire a Google Home or an Alexa speaker to access this feature.

On a more positive side, you should be able to stream media from your mobile device to the Samsung RU7100. This can be done via Samsung’s SmartThings app.

Lastly, I will rate the Samsung RU7100 an eight out of ten in this smart features review section. 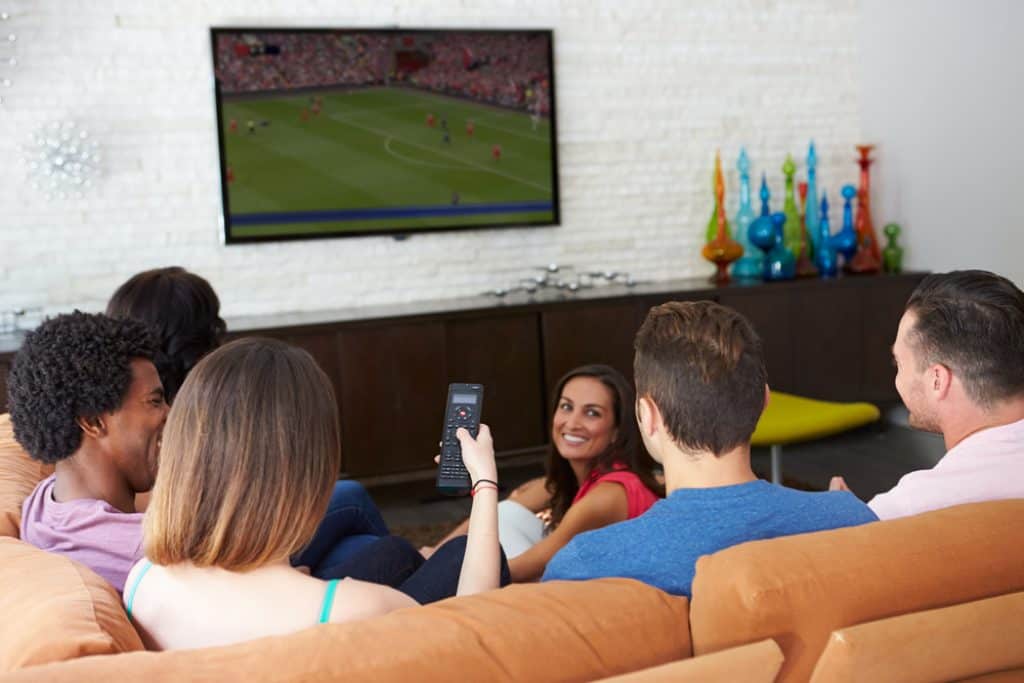 Yes, it is. The Samsung RU7100 is a decent 4K television that offers adequate picture quality. Additionally, this television comes with a decent number of ports and it supports HDR.

2. How Long Does A Smart TV Last On Average?

Smart TVs should survive up to seven years when used at max potential or on the highest settings. You will, however, get more years out of your smart TV if you handle it responsibly.

3. Who Is The Owner Of The Samsung Brand Of Televisions?

4. Is LG Better Than Samsung?

LG manufactures OLED displays, which are the most colorful and contrast-rich screens available. Samsung, on the other hand, has stuck with QLED panels, which lack the visual quality of OLED.

5. Which Television Brand Is The Most Reliable?

Without a doubt, Samsung would be at the top of the list. This is because, in terms of viewing angles, brightness, and picture quality, Samsung televisions remain unrivaled.

7. How Excellent Are Samsung Televisions?

Samsung produces excellent televisions in general. Their price range has risen slightly over time, but most individuals should still be able to find a Samsung TV that meets their standard and budget.

8. What Is The Difference Between Samsung TVs And Toshiba TVs?

Toshiba televisions, however, have input latency, quicker response time, and are brighter.

9. Is TCL A Better Brand Than Samsung?

Despite the fact that TCL offers a number of high-end televisions with brilliant picture quality, Samsung is the overall winner in this area. This is because Samsung TVs’ upscaling (converting HD to 4K) is typically outstanding, and they have impressive sound features.

10. Does The Samsung RU7100 Have Wireless Connectivity?

Yes, it does. For wireless connectivity, the Samsung RU7100 features Bluetooth and WIFI. 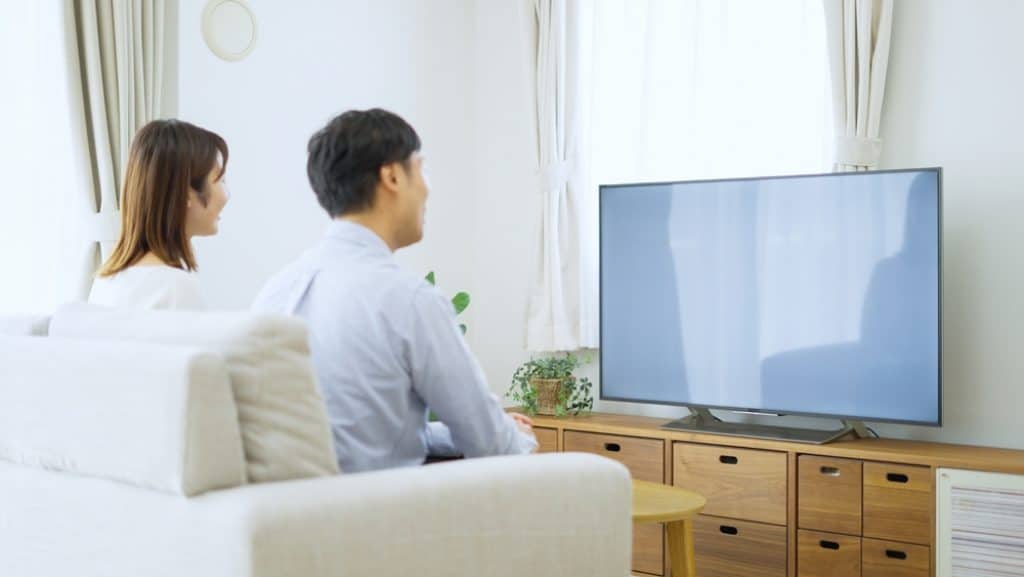 The Samsung RU7100 is a smart television that offers adequate performance. This television delivers decent picture quality and impressive speakers for enjoying your favorite TV shows.

Furthermore, this Samsung television is outfitted with an ideal number of useful ports as well as Bluetooth for wireless connectivity. However, despite its price, the Samsung RU7100 lacks a voice remote.

Additionally, the television isn’t bright enough for usage in well-lit environments. Nevertheless, gamers will find the Samsung RU7100 appealing thanks to its display’s low input lag.

Overall, asides from its poor brightness and other minor flaws, the Samsung RU7100 is a television everyone would love.

5 things to know before deploying 5G in your business

Tactile virtual experiences and hardware that lives with us – TechCrunch

5 Key Differences You Should Know

Snapdragon 8 Gen1: Everything You Need To Know

‘Face With Tears of Joy’, ‘Red Heart’ Most Used Emojis of 2021: Unicode Consortium

Bob Dole Lived With a Disability for Decades. Here’s How It Shaped His Life and Legacy

Set those clocks back, and enjoy an extra hour of Black music