The Russian-made Sputnik V Covid vaccine has demonstrated high long-term efficacy, according to data collected in San Marino. The jab remains around 80% effective against the disease six to eight months after being administered.

The data was revealed on Wednesday by the Russian Direct Investment Fund (RDIF), the sovereign wealth fund which bankrolled the vaccine’s development.

Evaluation of the vaccine’s performance is based on analysis of real-world experience obtained in the Republic of San Marino. About 70% of the microstate’s 34,000-strong population have received the Russian-made vaccine. 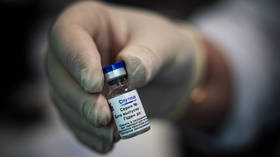 “The data is based on the number of Covid infections in San Marino in November 2021. Efficacy was calculated based on data obtained from over 18,600 individuals fully vaccinated with Sputnik V not less than five months before November,” the RDIF said in a statement.

The analysis shows that the vaccine remained some “80% effective against coronavirus infection from six to eight months after administering the second dose.” Hospitalization rates among those Sammarinese who got vaccinated with Sputnik V have been extremely low, with “only 0.75 per 1,000 people” ending up in hospital over the span of the mass vaccination campaign from February to November 2021. “This rate is more than two times lower than that of any other vaccine used in the country,” the RDIF noted.

“Efficacy of Sputnik V in 6-8 months is much higher than officially published efficacy of mRNA vaccines,” the fund added.

Multiple studies have raised the alarm about the waning efficacy of mRNA vaccines, with the American Pfizer jab in particular faring rather poor over a long period of time. According to a study, bankrolled by Pfizer itself and published in the leading medical journal the Lancet, the jab demonstrated 88% efficacy in the first month after full vaccination, dropping to only 47% after five months. The study was based on analyzing a large amount of data, harvested during vaccination campaigns in the US.

A competing mRNA vaccine, the Covid-19 shot by Moderna, another American company, has apparently shown significantly better long-term efficacy than Pfizer’s shot. According to the company’s own claims, the jab remains some 93% effective six months after full vaccination, compared to the shot’s initial efficacy of 94%.

These estimates have been corroborated by research from the US Centers for Disease Control and Prevention (CDC). The research showed the Pfizer jab’s efficacy falling from 91% to 77% over the 120-day period after vaccination, compared to Moderna’s shot demonstrating decline from 93% to 92% during the same period.

An analysis of effectiveness of the mRNA shots over a longer period of time, however, has produced worrying results. According to a study, based on data from of nearly 800,000 US veterans and published in the Science journal early this month, both Pfizer and Moderna jabs demonstrated a major decline in efficacy over a 7-month period. While effectiveness against the disease was some 89% for Moderna and 87% for Pfizer in March, it dropped to 58% and 43% respectively by September.

Subscribe to RT newsletter to get stories the mainstream media won’t tell you.

How To Make Oat Flour