These days, Capitol Hill townhomes aren’t for living in. They’re for lobbying.

“Just me personally, I’ve probably had 20 members of Congress say, ‘Hey, can we do an event over there?’” said Brian Bell, a pilot-advocate for the association. “Now, we want to make sure everybody knows we have a permanent presence on the Hill, being the largest airline in the world, and what this will allow us to do as far as an advocacy perspective from the Allied Pilots Association, now we can entertain members of Congress, both sides of the aisle.”

The popular conception of a lobbying shop usually involves an office on K Street, an expense account at some popular steakhouse and a small army of operatives that hit the fundraising circuit in downtown D.C. on a nightly basis. But influence peddlers have long explored other, subtler venues to twist the arms of members of Congress. And the Capitol Hill townhouse is chief among them.

The townhouse owned by the Allied Pilots Association is one of more than 20 properties identified by POLITICO that are located around the Capitol Hill area and owned by business groups and others lobbying Congress. The groups use these homes, often registered with the city as residential property, as a workplace for D.C.-based employees, a respite for K Streeters taking a break from meetings on the Hill, and, most notably, a cheap fundraising venue for members of Congress. But above all, these luxurious, often multimillion-dollar townhouses provide companies, trade associations, religious groups and lobbying shops with a chance to rub shoulders with lawmakers outside the bounds of government property.

They’ve also been the nexus for some controversy. Former President Donald Trump’s EPA head, Scott Pruitt, came under fire a few years ago for leasing a Capitol Hill condo from an energy lobbyist’s wife, herself a healthcare lobbyist.

The townhouses, a pillar of the D.C. lobbying circuit for decades, have long provided a unique set of benefits to the lobbyists that own them and the lawmakers who attend events at them. The first, and most important, is proximity. Busy members of Congress and their overworked staff are able to duck out of the office for a brief period of time, attend an event and rush right back in time for a set of evening votes.

“I think it’s really about convenience — to be able to host members without having them travel far from the Hill,” said Izzy Klein, a co-founder and principal at the Klein/Johnson Group, which counts Oracle, CVS, Clearview AI and Cisco as clients, among others. “I think they can offer up something that can fit into a members’ schedule mid-day, to do a lunch or something, whereas it would be harder to get a member downtown for that same purpose.” Oracle, one of Klein’s major clients, owns a popular perch across the street from the House side of the Capitol.

But for members of Congress, who are constantly seeking to raise money for their next reelection campaign, there’s also a major financial perk. Compared to the lavish hotels and restaurants that lawmakers tend to flock to for fundraising events, the price to rent one of these townhouse rooms is a veritable steal. Costs range from roughly $140 to $300 per hour — a cut rate that corporate owners can often write off as an in-kind donation to the fundraising candidate from their PACs.

Campaign finance guidelines require property owners to rent out space for fundraisers at “fair market value” — meaning they can’t give special rates to lawmakers with whom they’re hoping to mingle. But that’s a loosely-defined term. Locations on Capitol Hill are in a constant process of comparing their rates to one another, according to a lobbyist whose company owns one of the townhouses, in order to ensure they’re not violating any Federal Election Commission guidelines. A few hundred dollars for a room is cheap, considering many of the townhouses are in prime condition, though unlike restaurant rentals, the price doesn’t include catering (Sen. Dan Sullivan (R-Alaska’s) True North PAC, for example, spent upwards of $2,400 at the bougie restaurant RPM Italian for a PAC event, according to campaign finance records).

Regardless, there’s little enforcement in this area of the law. “The FEC just doesn’t have the time to sit around and monitor whether or not a townhouse is being rented out at a fair market value for a campaign fundraising event,” said Craig Holman, a campaign finance lobbyist with advocacy group Public Citizen. “It’s left to the discretion of the lobbyists and campaigns to determine what they want to charge. I suspect very frequently it’s way under fair market value.”

The American Dental Association townhouse is pictured in the Capitol Hill neighborhood of Washington, D.C. This photo has been edited to preserve the privacy of residents. | Hailey Fuchs/POLITICO

The in-person fundraising circuit in D.C. almost entirely shut down during the pandemic. But after nearly two years of crickets, the townhouse lobbyist fundraising scene is now showing signs of life. With the D.C. mayor’s recent announcement rolling back parts of the city’s indoor mask mandate, the coming months will likely bring the advocacy community back to their regular haunts.

“Events have definitely begun to restart,” Klein said. “I don’t want to say every member has restarted because there are some that are still doing virtual only. But there are definitely a bunch that have been restarted.”

“Right now is a little unique, because it’s hard to hold events anywhere,” said one House Republican aide, who said he attends a few townhouse events per month. “People aren’t doing things at bars, they’re not holding big galas, so the townhouses have been a little bit of a reprieve from that. They can have events — they’re private property so you can have people there and get together.” People at those events often do not follow Covid-19 health protocols, meaning they do not wear masks or socially distance.

The aide described the culture at many of the townhouses as casual and convivial, with staffers buying six-packs of beer to drink on the plush couches in the townhouse living rooms near the House and Senate office buildings.

Some industry townhouses, however, are still not ready to open their doors. The American Dental Association said its Capitol Hill house would not open until sometime next year. A spokesperson for the engineering company Fluor said that its property — which usually serves as both an office space and a residential property for a lessee — has largely remained dormant for nearly two years. 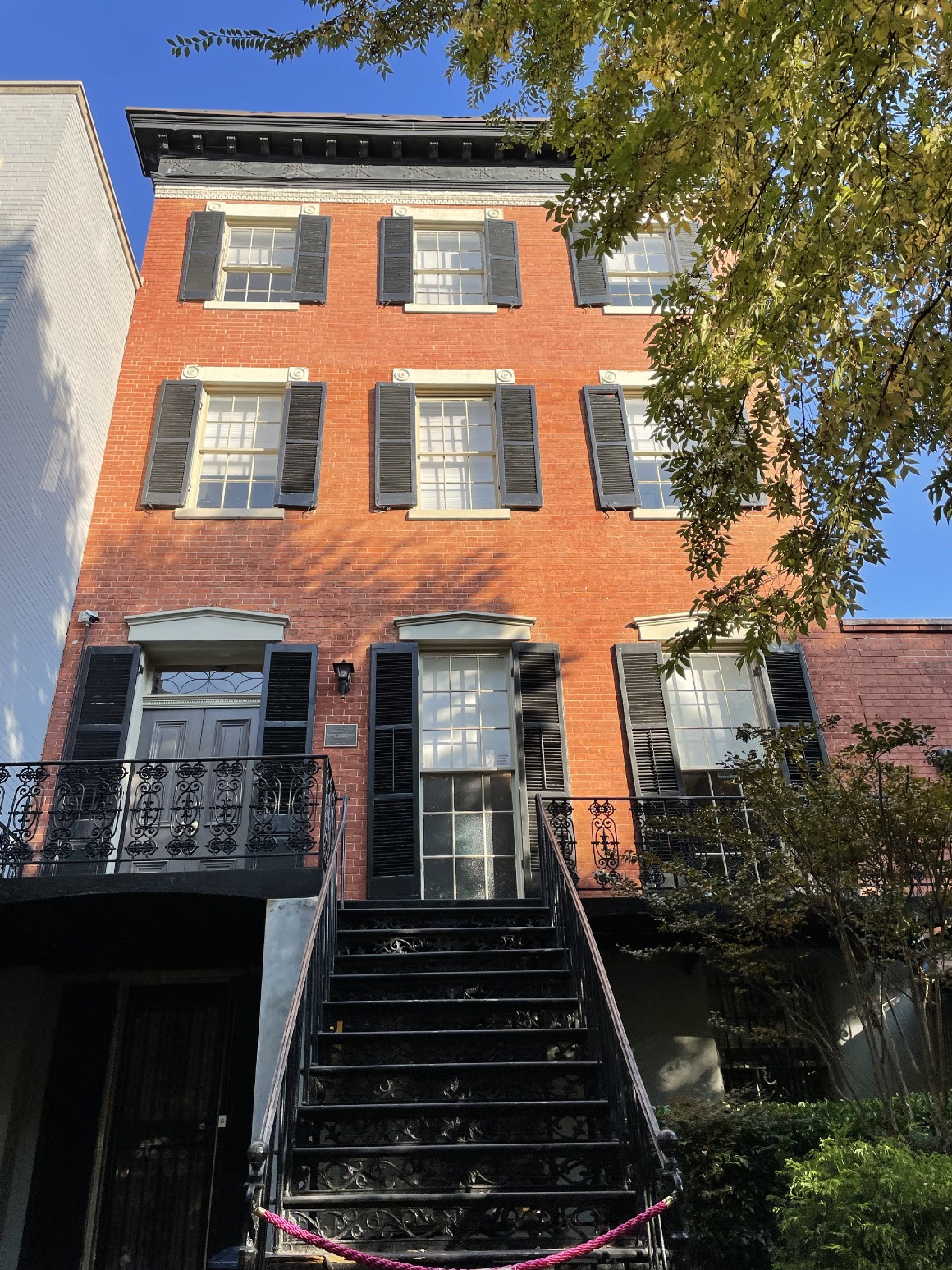 The National Indian Gaming Association townhouse is pictured in the Capitol Hill neighborhood of Washington, D.C. This photo has been edited to preserve the privacy of residents. | Hailey Fuchs/POLITICO

“We haven’t figured out exactly what the parameters will be to ensure FEC compliance and any related issues, but … I am confident that OPAC [the Osteopathic Political Action Committee] will be looking to leverage the space to bring in lawmakers and campaigns into the space,” said David Pugach, senior vice president of public policy at the American Osteopathic Association.

Some groups are outspokenly proud of their prime Capitol Hill real estate — the house owned by Alticor has an Amway sign out front, along with the ones owned by the Associated General Contractors of America and the Allied Pilots Association.

“This will boost us because when people hear Allied Pilots Association, now they’re gonna realize, ‘hey you know they have a great venue,’” said Bell, the pilot who is based in Texas. “It’s all about the building the relationships that we strive so hard to do because everyone knows in Washington D.C., it’s the relationships that matter.”

However, the facades of some corporate townhouses around the neighborhood show no easily identifiable information about the property’s true owner. The townhouse owned by UPS is registered with the D.C. government under an LLC called “BT-OH LLC.” According to D.C. records, the address associated with that LLC is the same as UPS’ Atlanta corporate office.

A number of organizations declined to offer POLITICO a tour of their property. Those include the American Dental Association, the Credit Union House (which just celebrated its 20th anniversary), the Association of Credit and Collection Professionals, and the technology company InterDigital. Highlighting the protectiveness some owners feel about their houses, the Oracle townhouse called security on a POLITICO reporter lingering outside, citing heightened security across the Capitol area following the events of Jan. 6. 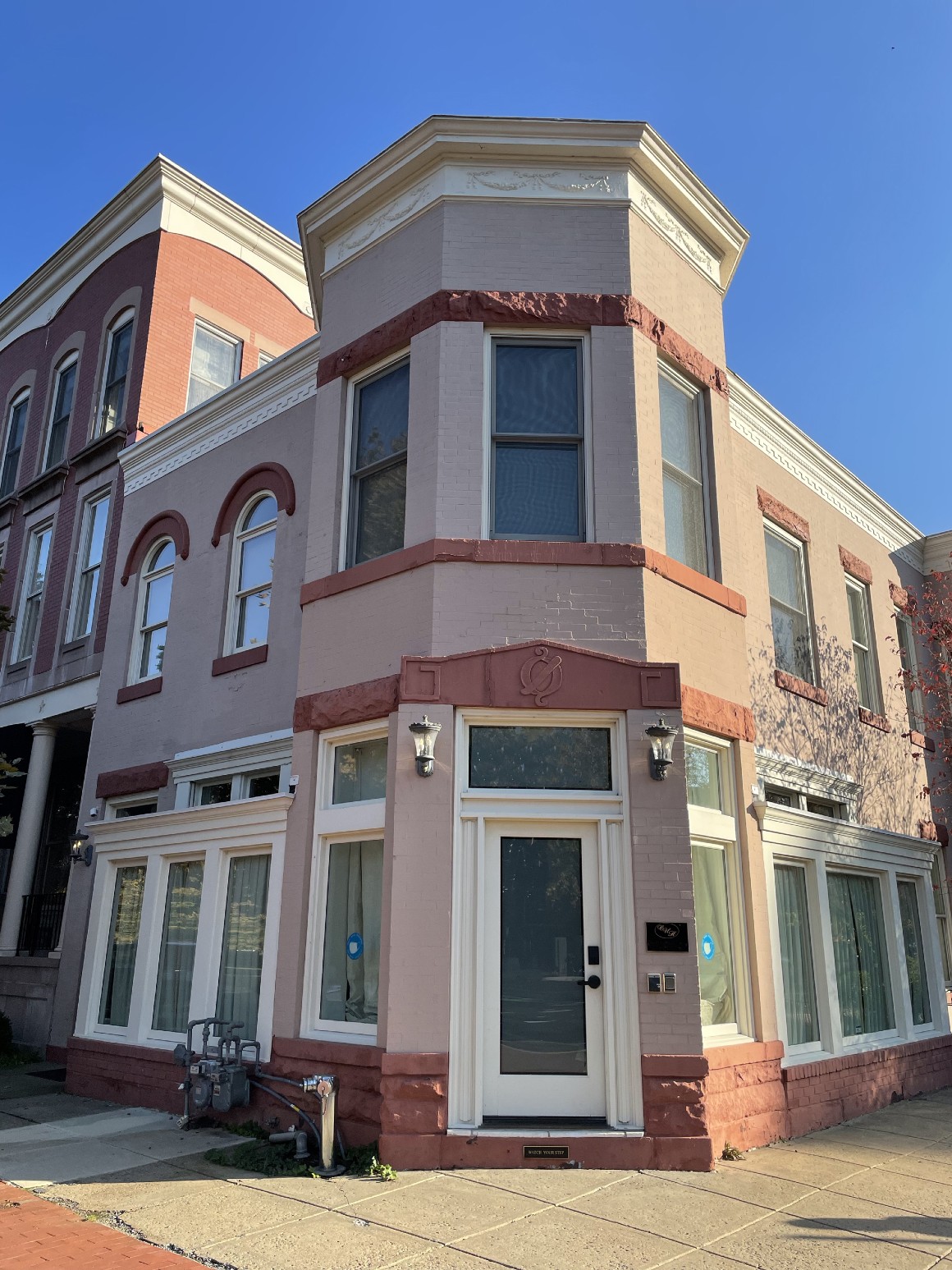 The Credit Union townhouse is pictured in the Capitol Hill neighborhood of Washington, D.C. This photo has been edited to preserve the privacy of residents. | Hailey Fuchs/POLITICO

That heightened security plus coronavirus restrictions on visitors to the Capitol have also shown how opportune property near campus can be, said Ed Gilroy, senior vice president of legislative affairs at the American Trucking Associations. Around the late aughts, the organization transformed its First St. SE properties and townhouse into a large connected complex, where various groups and lawmakers can rent out space for events. Gilroy, who gave POLITICO a tour of the property, called the complex the “physical foundation” for the association’s advocacy.

The townhouses don’t often make money for their owners, but they pay dividends in access and influence. Companies with corporate offices on the other side of town often struggle to attract members of Congress to their events, several lobbyists said.

“If you’re a trade association or corporation and you want to play at the highest level, having something right near the Hill is very valuable,” said Stewart Verdery, CEO and founder of Monument Advocacy, a firm that counts Google’s parent company Alphabet, Amazon and Netflix as clients. “It gives you the mechanism to engage with members that others aren’t going to be able to do.”

Verdery said it sends the message that the corporate owners are “an access player, so it’s probably not for everybody.”

The Republican aide said the influence is often subtle — less quid pro quo and more about the social relationships that form between lobbyists and lawmakers during the flurry of activities. “I don’t know that any staff are particularly smitten by, ‘Oh, I go to their townhouse so I gotta be nice to them when it comes to legislation,’” the aide said. “But I do think a lot of members hold fundraisers there, so you have to wonder if you’re raising a lot of money using their house, if that’s going to make you think twice before you vote against them.”

U.S. economy slowed to a 2% rate last quarter in face of Covid

CHRISTOPHER STEVENS:: If Doctor Who doesn’t care about her mum’s death, why should we?

Would You Make a Great Sleep Coach?