For the 35th anniversary of Super Mario Bros. last year, Nintendo released a special edition Game & Watch. (If you don’t know, Game & Watch were a line of handheld LCD devices from the ‘80s that could each play one very simple game.) Rather than featuring a single title, the Super Mario anniversary device had a full version of the original adventure as well as its Japan-only sequel, known in the West as Super Mario Bros.: The Lost Levels.

Nintendo’s pulling the same trick this year with a 35th-anniversary Legend of Zelda-themed Game & Watch that just went on sale. And like last year’s model, it includes a color screen and full games, but the selection is more generous. It includes the original The Legend of Zelda and Zelda II: The Adventure of Link, both originally released on the NES. It also includes The Legend of Zelda: Link’s Awakening, which came out on the Game Boy in 1993, making this essentially a collection of Zelda’s early 8-bit adventures.

I actually have never really played the first two Zelda games, though I do love Link’s Awakening. I played the Switch remaster a few years ago, but I haven’t touched the original game since my childhood — so when we got a chance to check this tiny device out, I was pretty thrilled to give that game a go.

The Game & Watch itself is elegantly designed, but also feels rather cheap. It’s a tiny, palm-sized device with an eye-catching gold front, while the rest of the device is clad in green plastic. The front has a 2.36-inch color LCD screen that is very small but also looks great — and when playing Link’s Awakening, the upgrade from the Game Boy’s screen, which had no backlight, is dramatic. The D-Pad and buttons are nothing to write home about, but they’re good enough.

On the right side of the device is an exceedingly modern USB-C port for charging its battery (which is pretty meager, so you’re going to need to do that a lot) and a power button; the speaker is on the left side. Finally, there’s a great Easter egg on the back: When the screen is on, the Triforce glows subtly through the green plastic. It’s a great little detail.

The Game & Watch has a few different modes: clock, timer and game. Pressing the “game” button lets you switch between the three Zelda titles, a Link-themed version of Vermin (from a 1980 Game & Watch), and the timer. The clock and timer are fairly self-explanatory, but their use of Zelda action as backgrounds is expertly done.

On the clock, you’ll see the original Legend of Zelda, and the CPU-controlled Link essentially battles his way through the game over the course of the next 12 hours, defeating Ganon and rescuing Zelda at 11:59. If you’re so inclined, you can pick up the console and control the action from the clock screen at any time. Likewise, the timer features a handful of different scenes from Zelda II: The Adventure of Link that you can either watch or play yourself. The device’s packaging even converts into a little stand so you can use the Game & Watch as a desk clock.

If you’re interested in this Game & Watch, though, you’re not in it for playing the clock: you want to relive Link’s earliest adventures on the smallest portable device you can find. Sure, you can play the NES Zelda collection on the Switch (or many other old Nintendo devices), but the Game & Watch’s miniature screen and old-school controls feel just right for these adventures. That’s doubly true with Link’s Awakening, since it was originally designed for portable systems.

The games themselves are exactly as you remember them, with no quality of life enhancements or graphics updates; Link’s Awakening is in black and white, rather than the later “DX” version released for the Game Boy color. I’m not complaining, though, as these original versions seem right for the Game & Watch as a celebration of the series’ 8-bit origins. 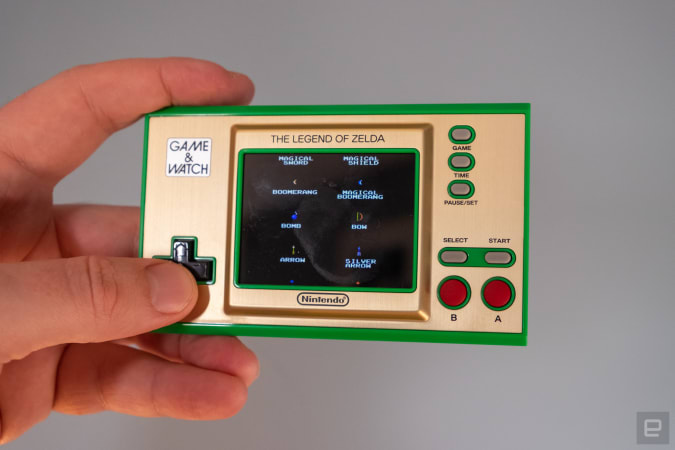 How you feel about these games will depend on your history with the series. Like I said, I’ve never played the original NES Zelda adventures; I got on board with A Link to the Past in 1992. As such, I don’t have a lot of nostalgic love for the original pair, and playing the first game was an exercise in frustration. There’s barely a map, Link is slow while enemies are fast, and aiming is imprecise at best. I definitely died more than my fair share of times, which was rather humbling for this self-described Zelda expert. But hey, I shouldn’t have expected anything different from a 1986 game, and I started to get the hang of it soon enough.

Link’s Awakening, on the other hand, was like visiting an old friend. Muscle and brain memory combined to have me slashing my way through it in no time at all, and it controlled just like I remembered. The A and B buttons may have felt rather squishy, but the D-pad was close enough to the one on my old Game Boy that I felt right at home. I don’t know if I’ll finish the NES Zelda games, but I’ll definitely play through Link’s Awakening.

So who exactly is this $50 device for? The Super Mario Bros. Game & Watch was really only meant for people who loved that first Mario game, not necessarily people who love the Mario franchise in general. Likewise, The Legend of Zelda Game & Watch is best for someone who loved these original games growing up. It doesn’t even have to be all three, though — if one of them was a formative gaming experience, you’ll delight in getting a chance to play it on a cute little handheld. But someone raised on Twilight Princess or Breath of the Wild probably will find these a lot less essential.

How to Buy Hampton Style Sofa –

A Record 4.4 Million Americans Quit Their Jobs In September