Miesha Tate’s status as one of women’s MMA’s most revered figures is set in stone – but after emerging from a five-year hiatus this past summer, her pursuit of revenge against double-champ Amanda Nunes will likely end in tears.

In the 2006 film ‘Rocky Balboa’, the old and decrepit titular character is teased out of retirement for one last fight against the fictional heavyweight champion Mason ‘The Line’ Dixon – but even the pen of Sylvester Stallone couldn’t quite conjure a scenario where former glories could believably be recaptured in such an arena, with Antonio Tarver’s Dixon ultimately claiming victory against Stallone’s relic character, but not without some trouble along the way.

Miesha Tate, by comparison, is neither old nor a relic, but the former UFC women’s bantamweight champion has again proved one of the fight game’s most dependable truisms, as well as fodder for countless Hollywood flicks: combat sports retirements are often a temporary situation, and comebacks rarely achieve the desired result.

‘Cupcake’, as she is delightfully known, ended her own five-year stint on the sidelines of her sport in July when she beat up the 44-year-old Marion Reneau to claim what was her first win in the cage since she dethroned Holly Holm all the way back in March of 2016.

Tate’s title reign was a brief one as she quickly ran into Amanda Nunes in her next outing. Tate, nor any of us, knew at the time that the Brazilian ‘Lioness’ would soon be regarded not just as the best fighter in the division, but the best female fighter ever. Period.

That lesson has since been reinforced by Nunes during Tate’s absence from the sport, and in two separate weight categories. The likes of Ronda Rousey, Cris Cyborg, Valentina Shevchenko and most recently Megan Anderson have all tried and failed in their bids for the throne.

And none of them got particularly close.

But Tate, the fighter strangled into submission by Nunes in just over 3 minutes five years ago, stated to the media this week ahead of her second comeback fight this weekend against Ketlen Vieira that she has affixed a target squarely to the champion’s back.

“It could take one more fight but it could also be because the way the rest of the division is right now and the way that Amanda has ruled it since I left, also makes it a little different in that I’m sort of fresh blood,” Tate said.

“So I want to be the one to say [to Amanda Nunes] your biggest competition is right here at 135. Fight me.”

Be careful what you wish for. 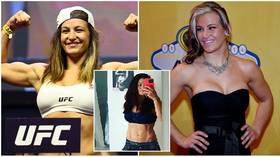 On one hand, Tate certainly cannot be blamed for chasing the champ. Gold has a very particular allure, particularly when it comes alongside the title of being the best in the world at something. But every fighter dreams of being a world champion – otherwise what exactly is the point of taking punches to the head for a living?

To her credit, Tate knows exactly what this feels like when she squeezed the championship out of Holly Holm, Ronda Rousey’s conqueror some months before, with a late rear-naked choke after being dominated on the feet by the former pro boxer for much of the contest.

But she also knows what it is like to lose the championship – and lose to Amanda Nunes specifically.

“You know how this business works,” Tate stated. “I can’t even use the word deserve because that doesn’t even make any sense when we use the word deserve in our sport. It’s not even so much about that. I know I’ve put in the work for a lot of years. I’m a former champion. I finished a woman who had never been finished [Reneau].

“I’m going to go out there November 20, I’m going to shock the world again and I’m going to make a case. If the UFC likes my case, if the glove fits, if the storyline rides, then I’ll be there.”

The storyline does, as she says, ride. There is something about the former champion returning to battle in pursuit of revenge against a dominant titleholder. And it might just happen. There is no one left for Nunes to fight, given that she has eviscerated all challengers across two weight divisions for several years now.

A win this weekend against Vieira, and then potentially another against a fighter among the top five-ranked bantamweights, will likely set it up, as if the narrative had been dreamed up on the silver screen.

Amanda Nunes will certainly keep up her end of the bargain, but could Miesha Tate?

‘The Brutal Death of a Child’s Dream’ — Global Issues

How Biden Hopes to Save His Party

This Glass Honey Dispenser Will Save You From Sticky Messes