How to Pick the Right Boot for an Outfit: The Five Elements of a Boot That Make it Dressy or Casual

Understanding the design details of your boots will allow you to play with the formality of your outfits – making being well-dressed incredibly easier.

Special thanks to Thursday Boot Co for partnering with us to make this guide visual!

I once had a literature professor tell me, “Nothing is an accident; even a character’s name is chosen on purpose.” I like that, and the older I get, the more I realize that applies to my sartorial choices as well. There’s nonchalance, formality, pragmatism, rakishness, smart casual – each an aesthetic that I choose, intentionally, depending on the day that lies ahead of me.

My usual garb for work is simple: button up shirt (with a button down collar), and a pair of chinos. How do I vary my aesthetic with that prosaic getup? The devil, as they say, is in the details. Bow tie or necktie; stripes, foulard, or polka dots; blazer, sportcoat, or sweater; dive watch, chronograph or a vintage tank; and finally, loafers, oxfords, or boots.

It’s fall (and winter is coming), and that means it’s boot season for me. Choosing the right pair of boots makes the difference between intentionality and just throwing something on.

The outfit introduces the character, but the boots, well…the boots give that character a name. So how do you know which boots to wear for which occasions?

It’s in the details: The features of a boot dictate its degree of casualness or formality. Your boots set the vestiary tone for the day, so you can tell your story deliberately.

Let’s talk about it: 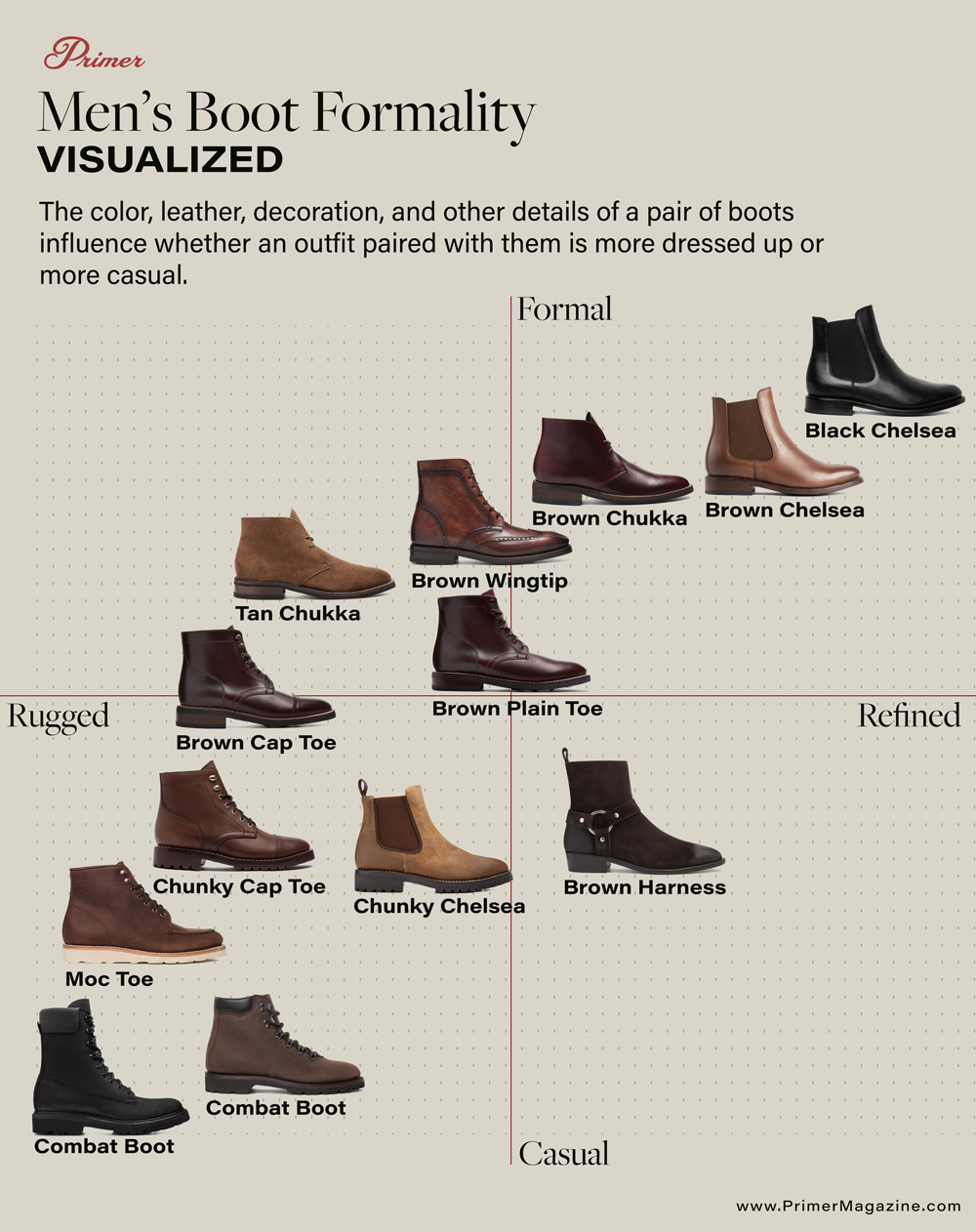 It starts with the sole, specifically the thickness of the sole and the level of tread it offers. In general the thicker a boot’s sole, the more casual it is. A thick sole offers more shock absorption and is typically made of rubber, connoting a rugged utilitarianism. Thick-soled boots are for city walks when the weather is questionable or a fall camping trip (and pretty much everything in between). In short, a thick sole offers a level of versatility that’s hard to beat. 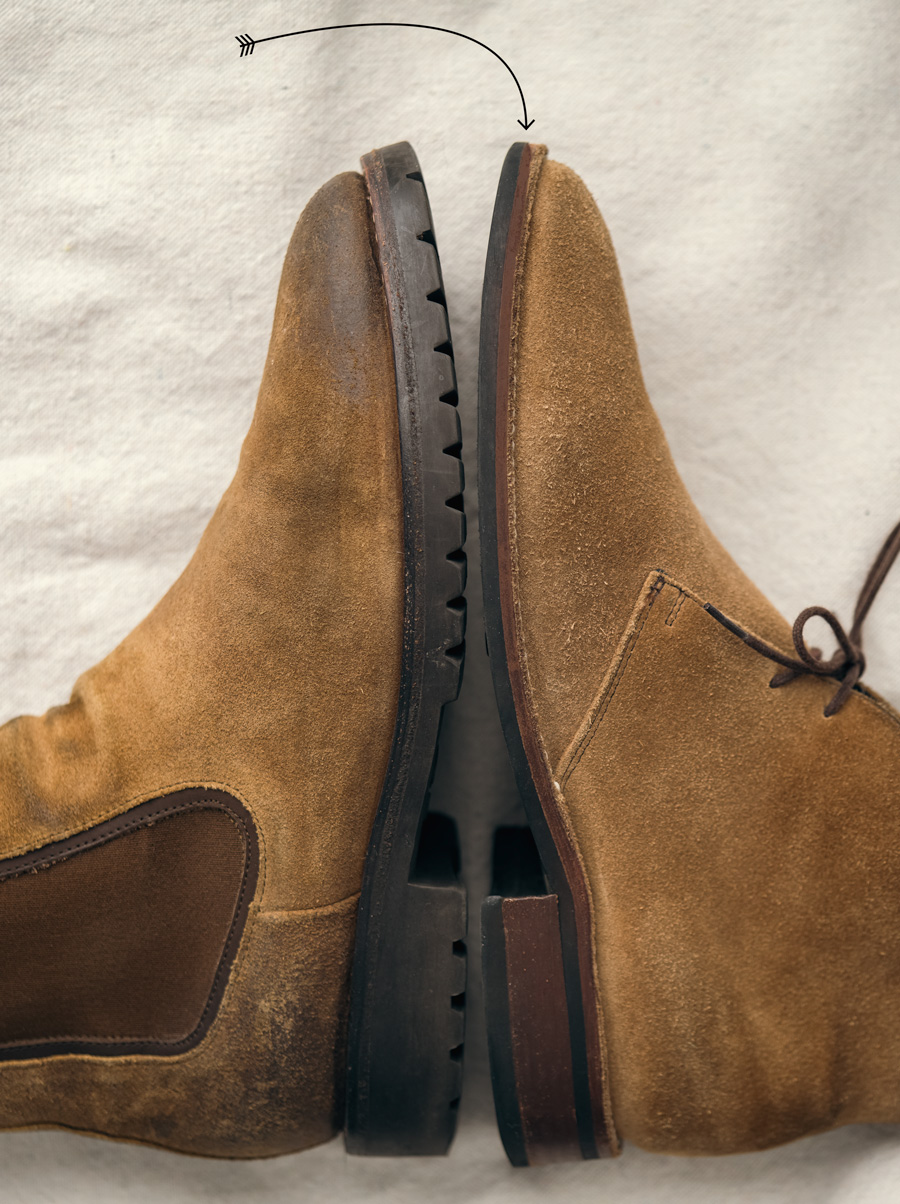 The chunky Legend Chelsea, with its lug sole and burnished toe is more casual than the thin soled Scout Chukka in the same color.

That being said, you’d have a hard time making a thick sole look formal. A thin sole (typically made of leather) is well-suited for the office or a night out with your SO. A thin sole looks terrific with a suit or a pair of slim trousers (or slim denim if you’re feeling rakish). A thin sole is more aesthetically refined, but it offers little in the way of support and will wear down quickly.

As for tread, the same rule applies: More tread, casual. Less tread, formal. A lug sole, which offers the most amount of tread, will keep your traction strong whether you’re on a snow-dusted street or a rocky wooded path. A thin, svelte sole offers a clean, dressier aesthetic and looks great with a suit, but it’s not meant for poor conditions.

When I think of the ultimate dress boot, the pinnacle of formality, I think of smooth, black leather with a high shine, no decoration, and a thin silhouette. The less attention the boot draws, the more formal it is. 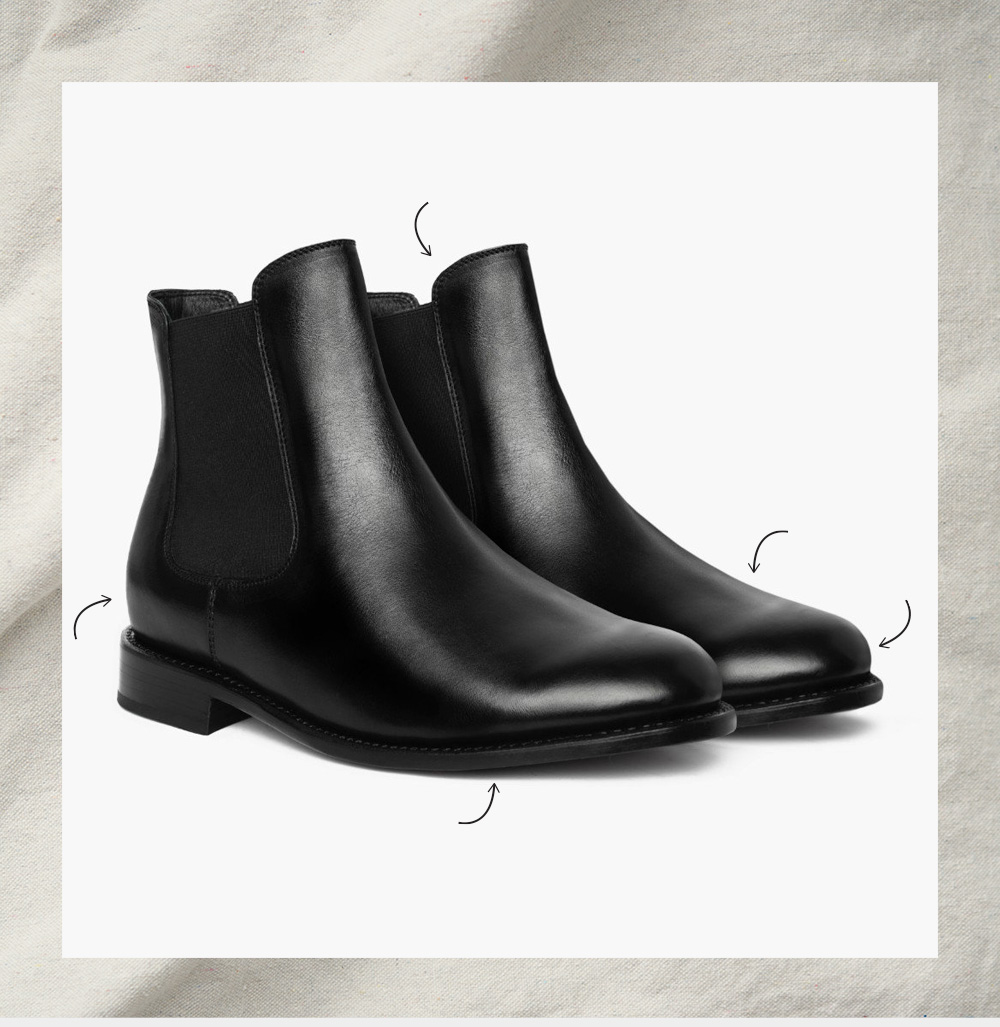 The streamlined silhouette and lack of any decoration mean that the Cavalier pairs perfectly with a suit or a pair of trousers for the office.

Decoration means anything that’s added to the boot that doesn’t serve a functional purpose. Wingtips, broguing (the little punched holes), moc toe, cap toe, harnesses – all of these draw attention to your boots, making them a statement of their own. Translation: These boots are inherently more casual. This doesn’t mean they can’t be dressed up, but that may mean toning down the rest of your outfit a bit – remember that dressed up means refined, not flashy.

The broguing, wingtip, and thick leather sole with rubber studding (for added grip and support) make these the perfect boot for a pair of jeans, slim chinos, or thick tweed suit.

Brogues, which are also often wingtips, are dressier shoes but on the spectrum of formality, their decorative touches make them not as dressy, for example, as the black Cavaliers shown above. 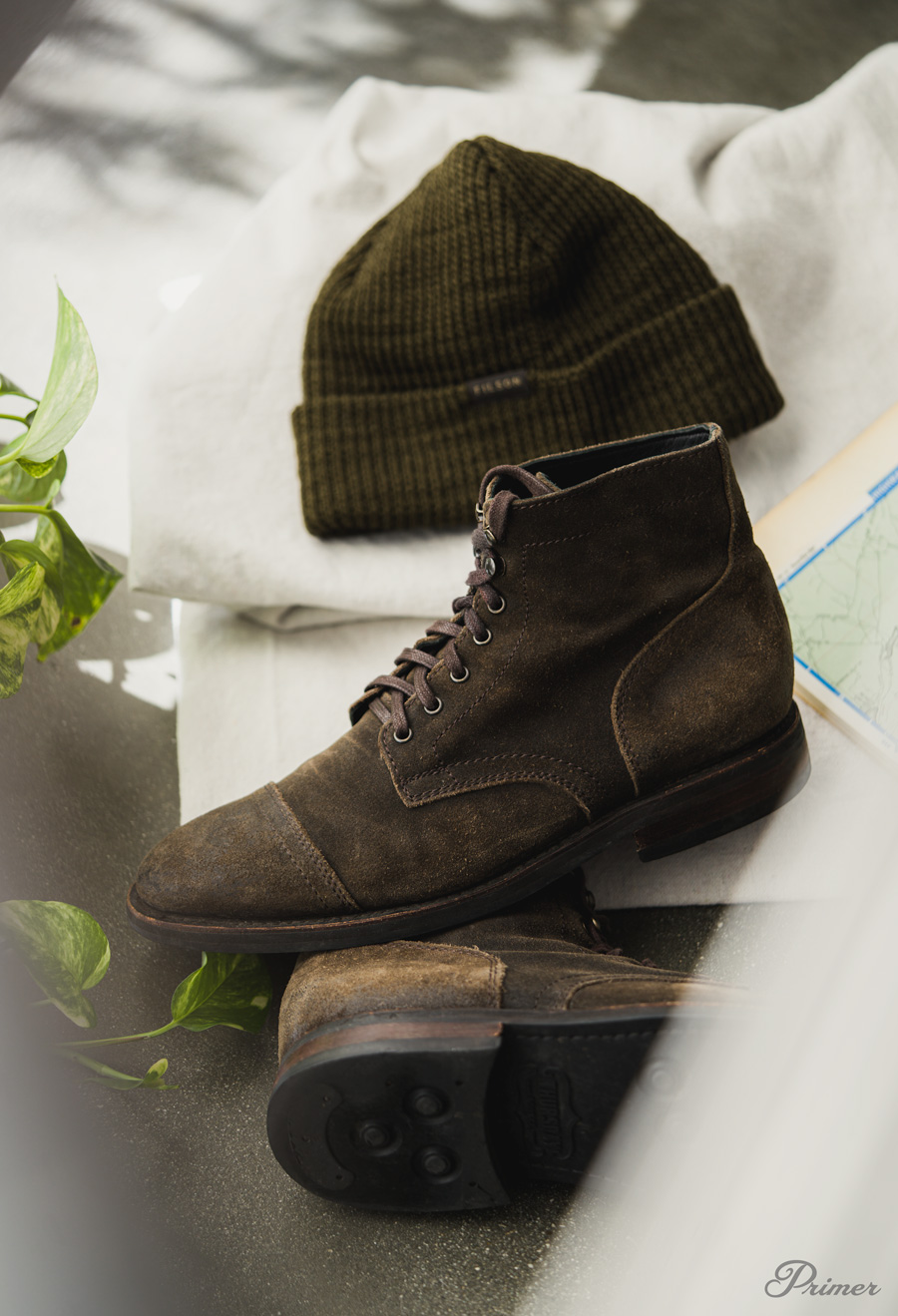 The more formal silhouette of the Captain is made more casual with the rugged cap toe. 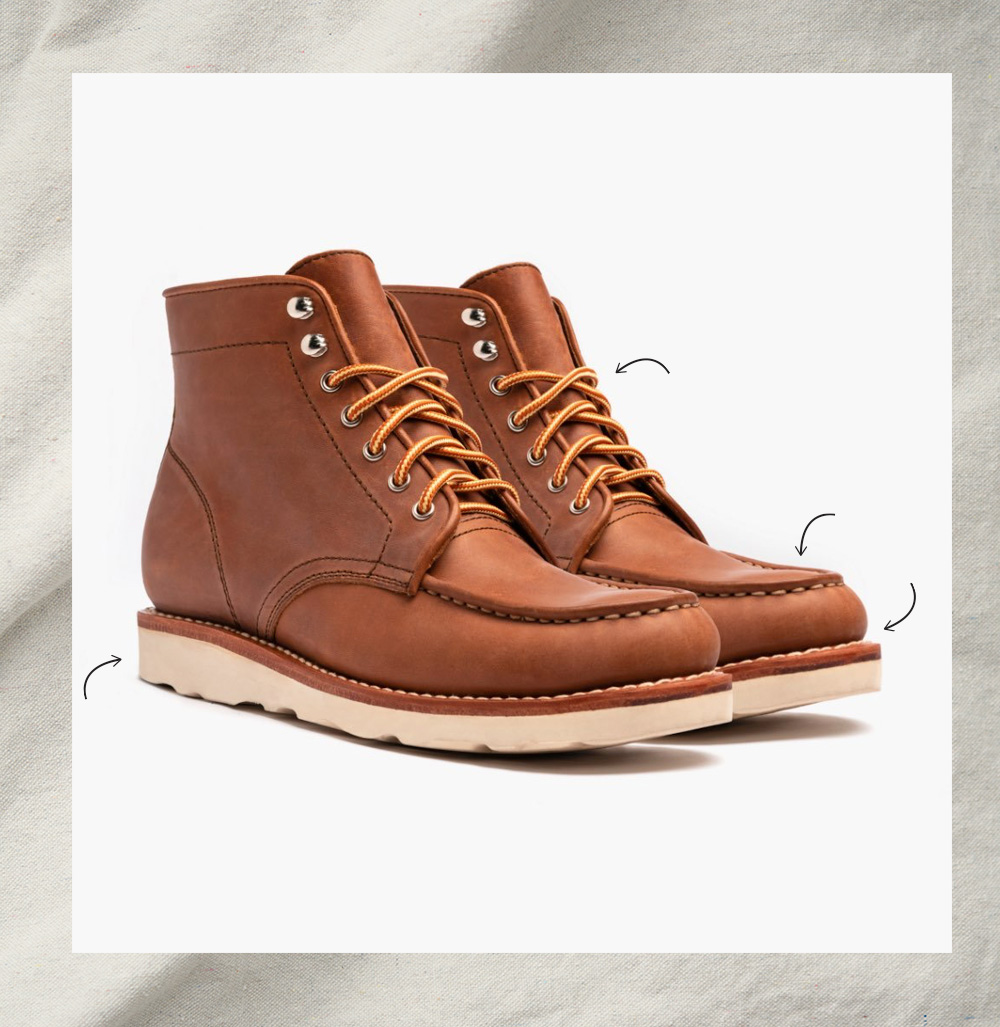 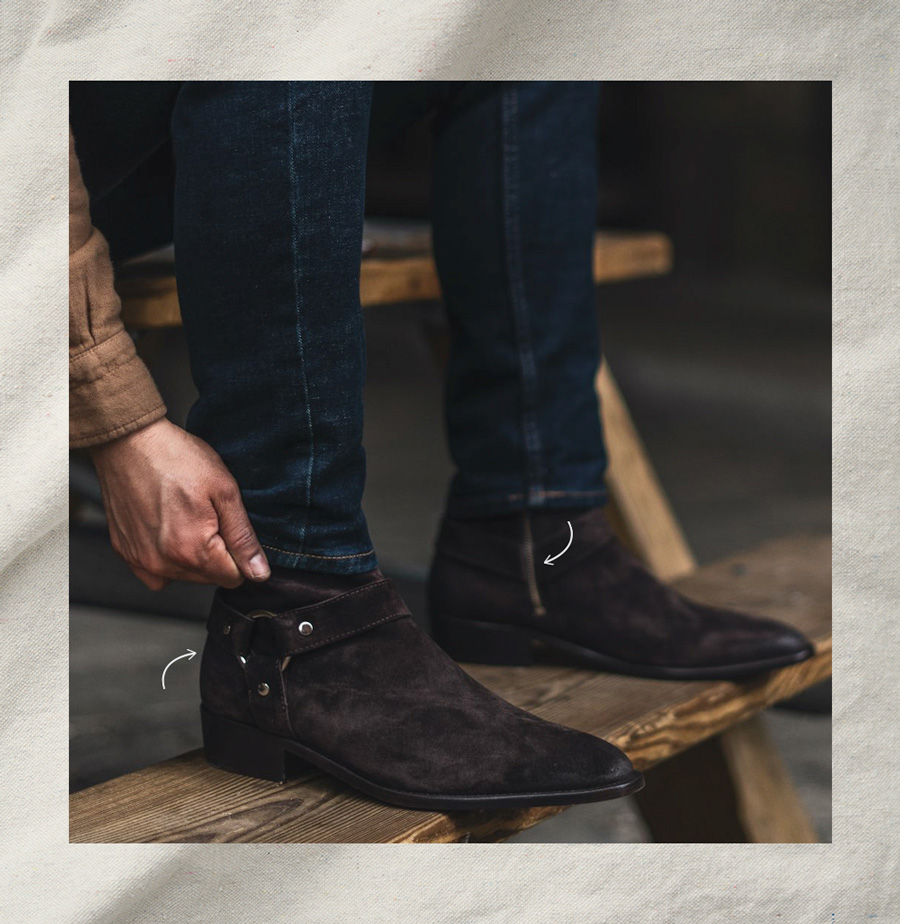 Looking for edge? The decorative straps and ring on a pair of harness boots takes the refinement of a Chelsea boot and makes it more casual. James Dean ain’t got nothin’ on you.

Like decoration, the texture of your boot leather imparts how much attention you want to draw specifically to your feet (and if it’s a formal affair, the goal is no attention at all). Once relegated strictly to fall, suede has become a year-round casual option, offering a soft hand (or foot?) and an admirably aloof aesthetic. 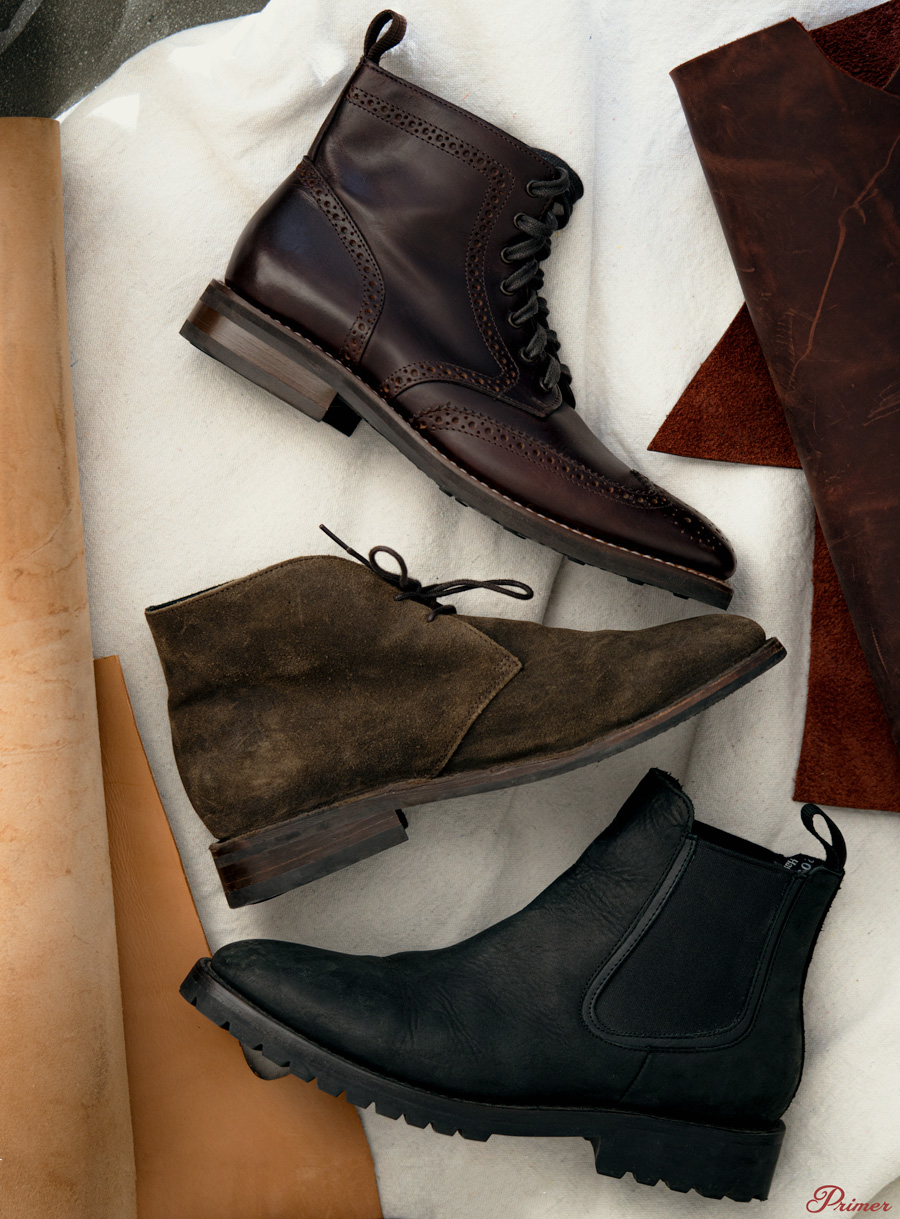 Smooth hide has the versatility to swing casual or formal, depending on a few factors: 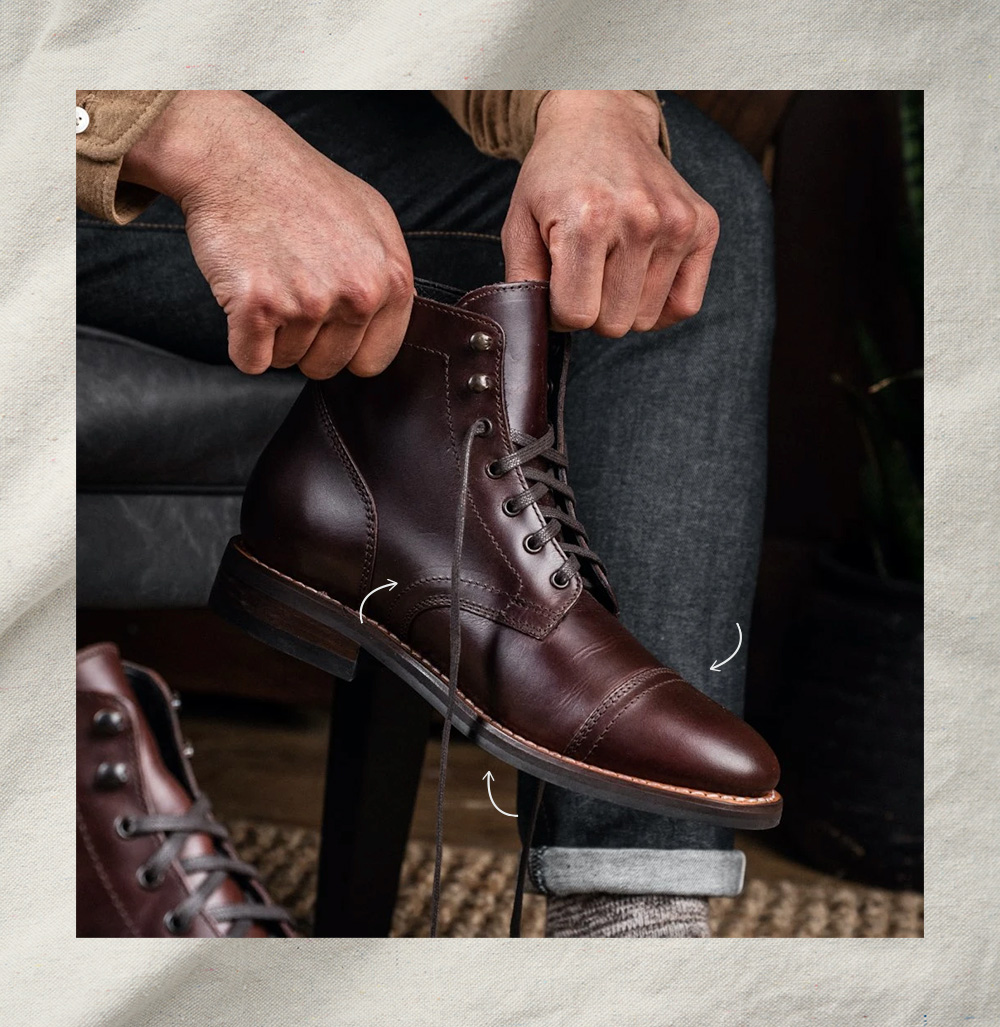 While the cap toe and rubber sole allow this boot to pair well with casual outfits, the high shine and rich saturation of the brown tone mean it’s also easily dressed up. If the budget is tight, this is the most versatile boot on the list.

If you’re trying to convey formality, you want to choose a dark-colored boot. Black, walnut, dark oak, these colors will complement your outfit without drawing undue attention.

The lighter the boot, the more contrast you create between the boot and the pants, and this look tends to lean casual. A quick note on non-traditional colors like navy or olive green: Yes, they’re awesome; yes, you should get a pair, and yes they’re more casual. 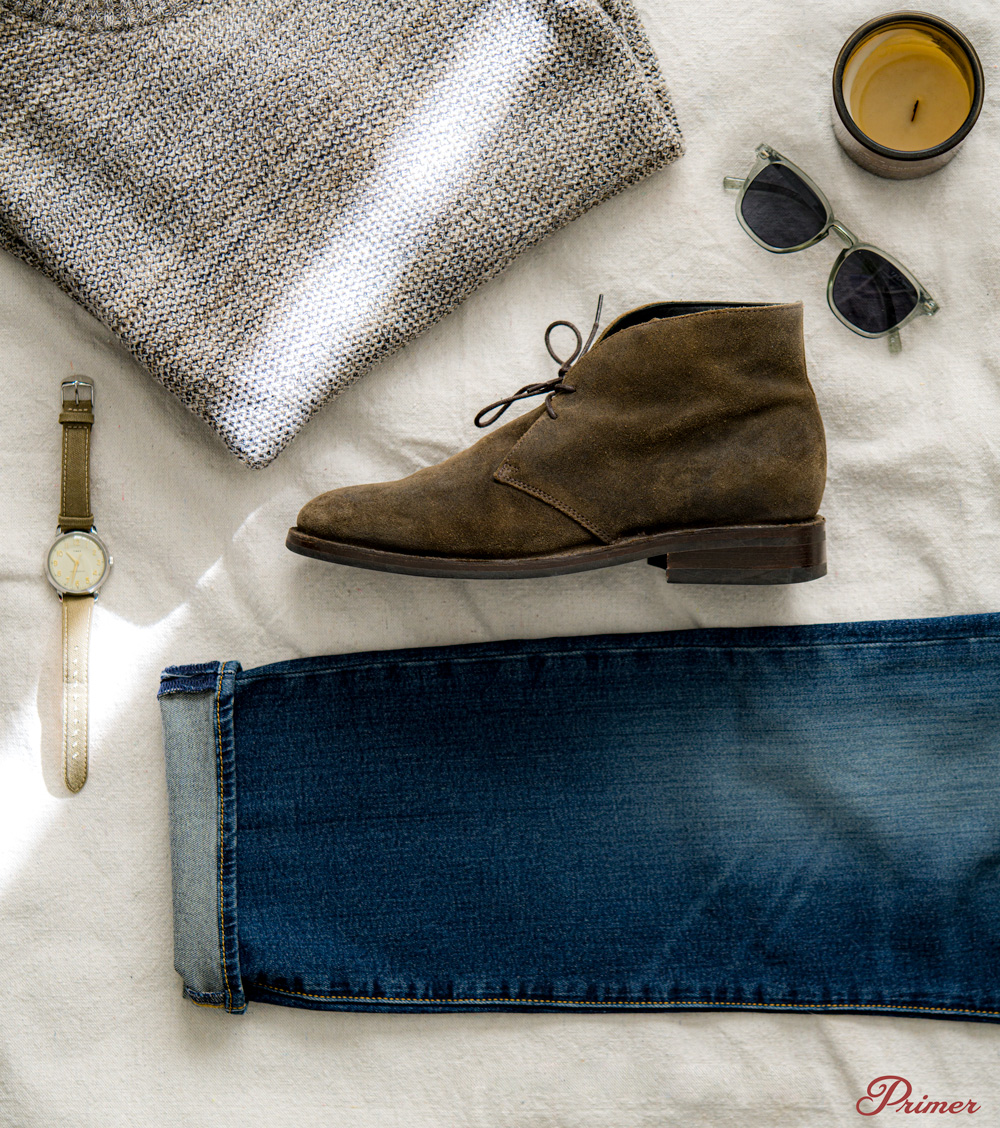 The rustic olive suede on the Scout looks especially handsome with denim in medium or dark indigo wash or with a business-friendly outfit.

If the boots are the steak, the laces are the sides. Like the difference between the plating of a roadside diner’s steak and eggs and a steakhouse’s ribeye with duck fat potatoes and broccolini, a boot’s laces can single handedly determine how formally or casually it can be styled.

Here are your options: 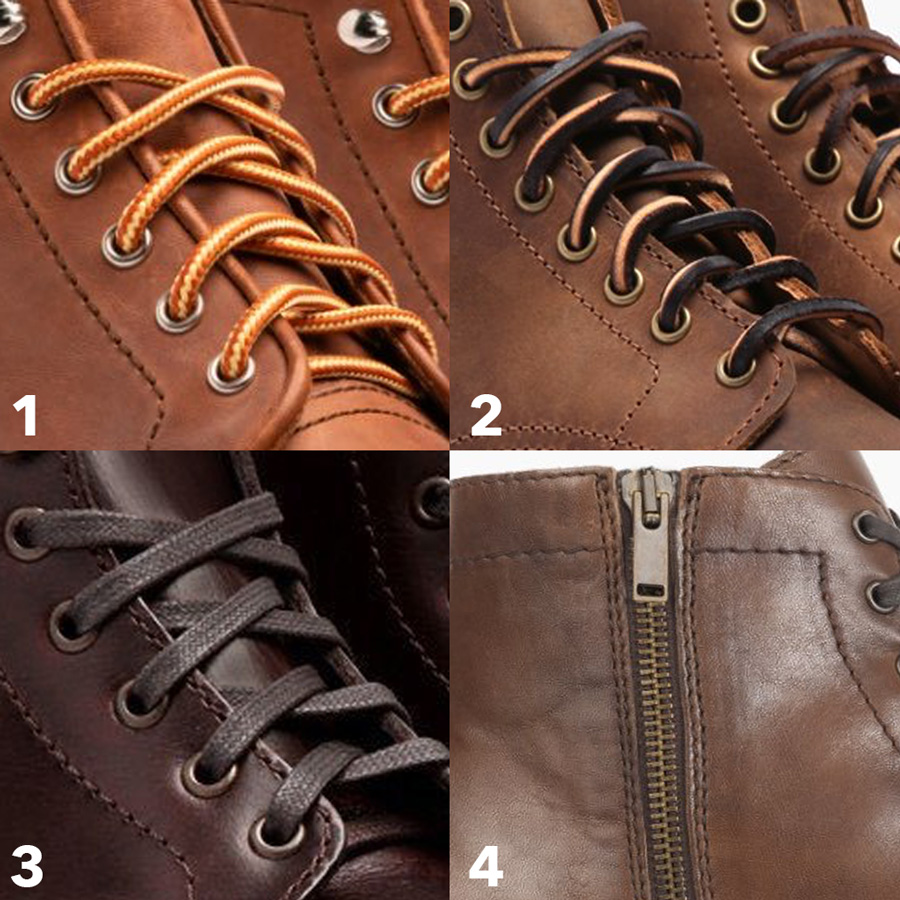