Not everything about “King of Cool” Dean Martin was what it seemed. The dashing playboy and heartthrob was actually a devoted family man to eight children. The legendary drinker — who always had a tumbler in hand —secretly filled his glass with apple cider. And that gleaming grin masked pain.

A new documentary explores the complexities of the beloved crooner, comedian and founding member of the Rat Pack. “Dean Martin: King of Cool,” which premieres Friday on TCM, features never-before-seen archival footage and delves into Martin’s strained relationship with Jerry Lewis, his bromance with Frank Sinatra and the personal tragedy of losing a child.

Born Dino Paul Crocetti in Steubenville, Ohio, in 1917 to Italian immigrant parents, Martin didn’t learn English until age 6 and was considered nearly illiterate. The hardscrabble life in his working-class town couldn’t have been further from the shiny patina of Hollywood, yet Martin’s irrepressible talent was undeniable. His seamstress mother, Angela, proclaimed that if her kid didn’t make it as a singer, nobody could.

Despite his swinging Rat Pack persona, Dean Martin (center, with guitar) was actually a family man with eight children, seven of whom are pictured here, including Deana (third from back left) and Dean Paul (third from back right).Getty Images

After earlier turns as a blackjack dealer and a boxer, his life could have easily stayed quiet and modest. But all that changed when he teamed up with hammy Jerry Lewis. “King of Comedy” Lewis first spotted Martin performing at NYC’s Glass Hat nightclub in 1945 and the duo cemented their professional relationship in 1946 with a comedy gig in Atlantic City.

Martin and Lewis — considered “the playboy and the putz” — soon catapulted to fame, performing on stages such as the Copacabana to raucous audiences who ate up the oil-and-vinegar shtick. They went on to make 16 movies together.

“They were like brothers,” Martin’s daughter Deana told The Post of their decadelong act, adding, “As Uncle Jerry would say, ‘They had magic in a bottle.’ ” 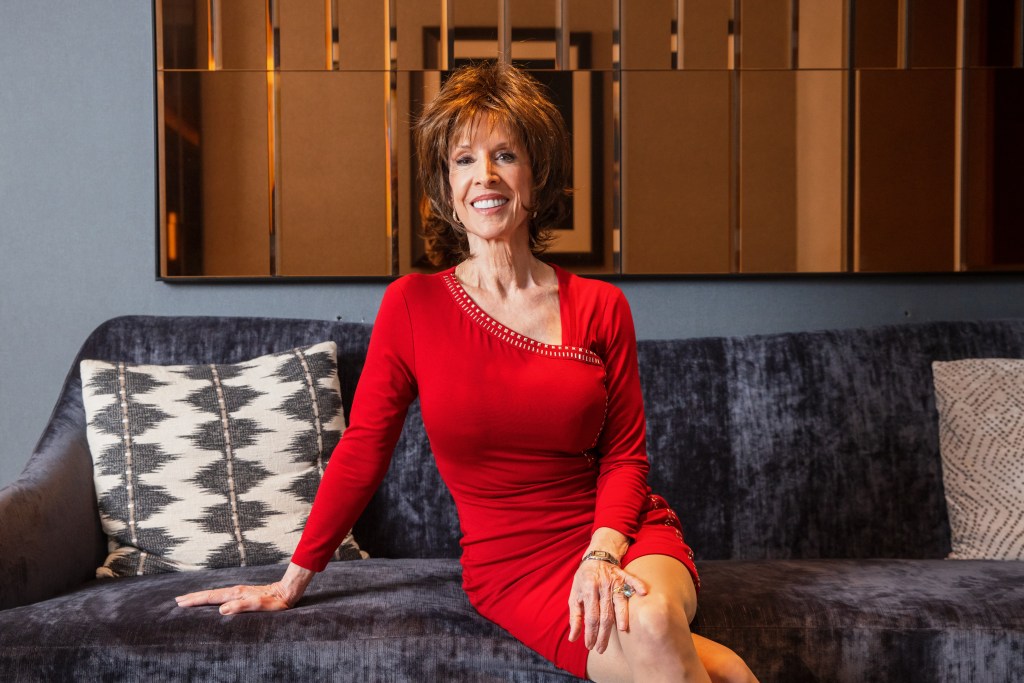 Their legendary split in 1956 left open wounds, with Martin reportedly telling Lewis, “When I look at you I see nothing but a f–king dollar sign.”

Deana, 73, and her siblings weren’t to bring up “Uncle Jerry’s” name after that.

“Dad was tired of being the bad guy,” Deana said, chalking up the breakup to irreconcilable showbiz squabbles. “Jerry was always the funny guy, and Dad was always the one reprimanding him.”

Martin would go onto star in myriad films, like “Ocean’s 11” — but his acting chops were on display in other ways. 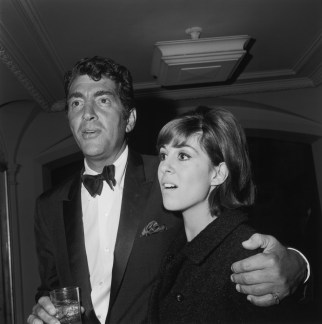 Deana Martin and her father in 1965.Getty Images

His famously boozy personality was in reality all smoking and mirrors, according to his daughter.

“Drinking – that was his gimmick,” said Deana, also a singer who splits her time between Beverly Hills and Branson, Missouri. “There’s no way he could have done that body of work [while hitting the bottle].” He faked it by filling his glasses with apple cider, according to his “Ocean’s 11” co-star Henry Silva.

The fourth of eight kids, Deana grew up in a household where life “was fun — almost all the time.” There was a who’s who of drop-ins, including fellow Rat Packers Frank Sinatra and Sammy Davis Jr., otherwise known as “Uncle Frank” and “Uncle Sammy” as “a sign of respect.”

Guests like Sammy Cahn would come over to write parodies or play “Time After Time” on the piano. While it could feel like business as usual in the Martin home, Deana admitted, “Of course you think, ‘Oh my gosh, I’m singing Christmas songs on Christmas Eve with Rosemary Clooney.’ ”

When she was about 17, Martin and Sinatra took Deana and a friend to Las Vegas. “We went out on the town with Dean Martin and Frank Sinatra. We went to see Don Rickles, and he was so afraid to come out because they were in the audience,” recalled Deana. “I’ve never seen my dad laugh so hard. That was my first time out with the guys. It was so much fun. They knew how to take care of us.” 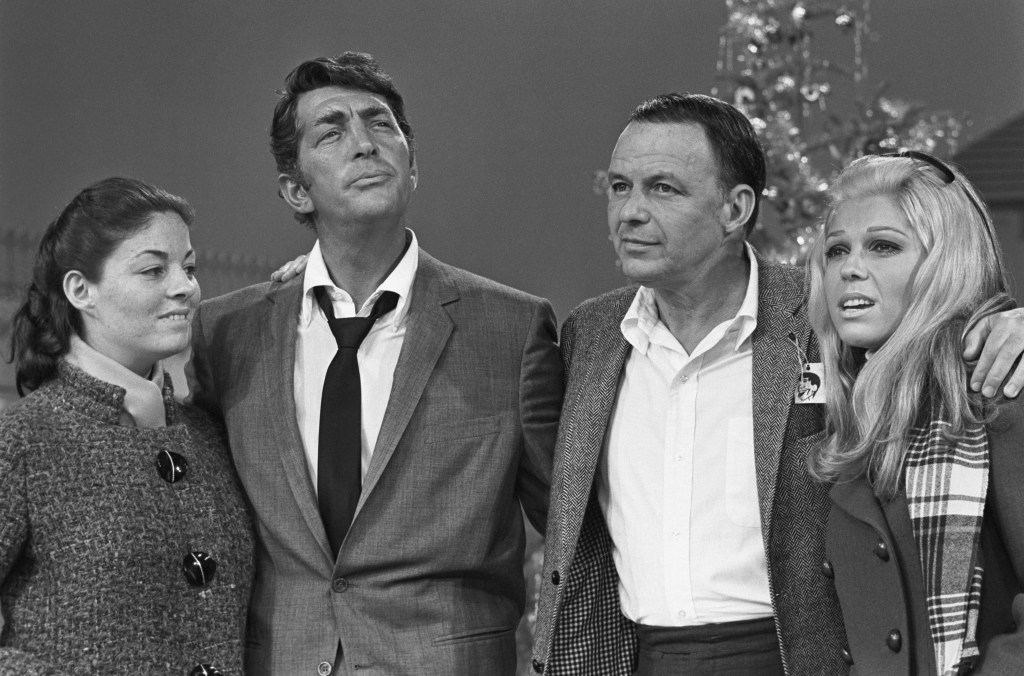 Deana Martin (left) and Nancy Sinatra made an appearance with their famous dads in “The Dean Martin Show” Christmas special in 1967.Getty Images

Martin and Sinatra were the best of friends, on and off stage. “They respected each other — they were not jealous of each other,” said Deana, adding that Sinatra made matching diamond pinky rings with his signature crest for the bosom buddies. Dean reportedly never took his off. Exchanging meaningful gifts was de rigueur. “They gave each other gold cigarette lighters.”

The Rat Pack was a big part of his professional and personal life. Rising political star John F. Kennedy would even catch the act in Vegas. While Sinatra angled for a spot in the administration, according to the doc, Martin supported JFK without wanting to get too close.

“He said, ‘If JFK becomes president, I’m going to ask him if I could become the Secretary of Liquor,’” Deana recalled her dad joking.

Martin strongly supported the civil rights movement, and when Sammy Davis Jr. wasn’t invited to the new president’s inauguration, Martin refused to go out of loyalty to Davis, who was in a mixed-race marriage with May Britt. “Sammy was one of them, his wife was one of them. If you could un-invite Sammy, Dad’s thinking was, ‘I’m not going to go. He’s my friend. That’s not right,’ ” said Deana. “That’s who Dad was.”

While Sinatra, referred to as a “dictator” in the doc by Martin biographer, James Kaplan, would stay up schmoozing until 5 a.m., Martin just wanted to go home to his wife, Jeanne Martin, and the kids.

Pretending to be a neighbor on Beverly Hills’ Mountain Drive, he once called the police on his daughter’s 18th birthday party so he could get some shut-eye. The cops recognized his voice immediately. “They just said, ‘Uh, OK, Mr. Martin, we’ll be right over.’ “

Other times, he was more direct. “He’d go around turning off the lights, guests still there, saying, ‘OK, it’s time to go,’ ” Deana said. 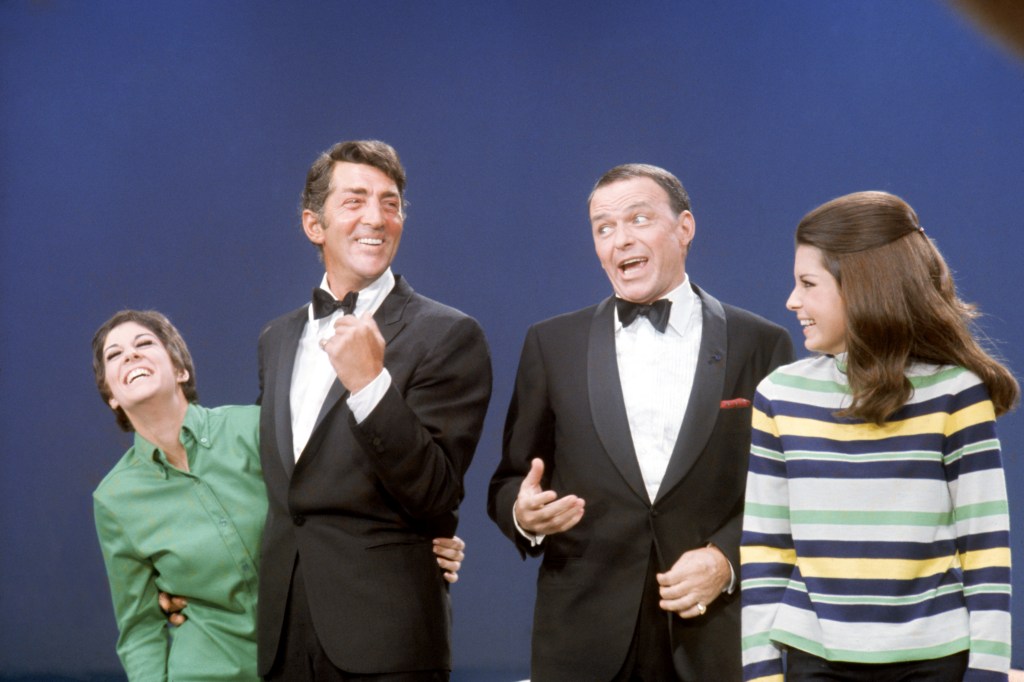 Deana Martin (from left) shares the stage with dad Dean Martin, Frank Sinatra and his daughter Tina in the 1960’s.Getty Images

After a successful nine-year run with his “The Dean Martin Show” (1965-1974), Martin enjoyed golf and solitude.

In the documentary, he’s painted as an enigmatic figure. “When you’re in Dean’s company, were you?” Norman Lear says, while Sinatra’s manager notes, “Dean had a wall no one got past.”

Deana sees his pathos differently. “I think he was content with who he was,” she said. “He didn’t talk a lot and people thought that was mysterious. But he was out there entertaining people all his life.” 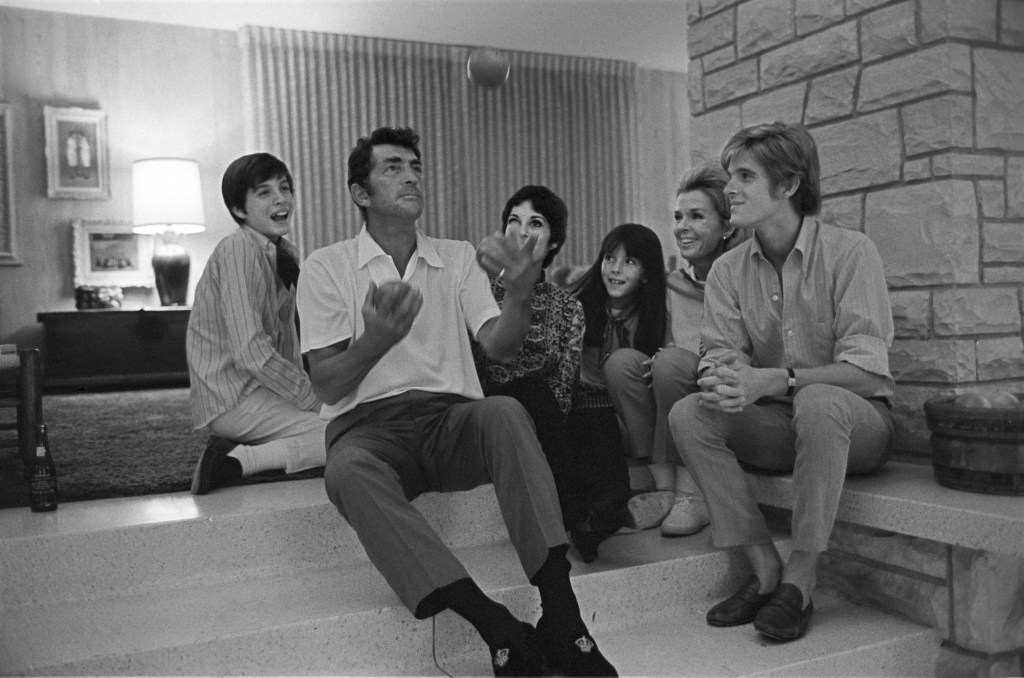 Dean Martin with his wife Jeanne and their children in 1966.Getty Images

Personal tragedy also struck. Dean Paul Martin Jr. was 35 years old in 1987 when the young pilot’s military training flight for the Air National Guard crashed into a remote California mountainside. It was Martin’s “implosion,” according to the doc.

Lewis secretly showed up at the funeral, sat alone in the back and never announced his presence to Martin. Still, it didn’t jumpstart the reconciliation the public hoped for.

“You can’t get past that,” said Deana. There were wounds on both sides. Even Lewis’ son said Martin’s name was verboten in the house.

The documentary suggests that the Rat Pack reunion, and 1988’s Together Again tour, was too soon after his son’s death.

“He was tired,” Deana said. “He’d been there, done that and bought the T-shirt.”

Martin himself died on Christmas Day 1995 at age 78 due to acute respiratory failure resulting from emphysema.

The Westwood chapel was packed with luminaries from the old guard, such as Shirley MacLaine, Bob Newhart and Jerry Lewis, who spoke lovingly of his friend’s “exquisite tranquility despite a great inner turbulence” — and new guard, including Charlie Sheen.

“Everybody really loved Dean Martin,” Deana said. “He really was the king of cool.”

Our Herb Roasted Zucchini and Carrots is the Perfect, Low-Calorie Side