Spartak Moscow’s Dutch international forward Quincy Promes will be prosecuted for attempted manslaughter and aggravated assault, according to reports from the Netherlands, after allegedly stabbing his cousin more than a year ago.

The charges against Promes, 29, stem from a family event in July 2020 during which the 50-times capped international “is being suspected of stabbing a relative… in which the victim, the suspect’s cousin, was seriously wounded in the knee”, per a release by Dutch prosecutors on Thursday.

Promes was not named in the statement but the player was subsequently identified in several further reports, including by Dutch newspaper Telegraaf.

The footballer was arrested last December, several months after the alleged incident which is understood to have occurred at the town of Abcoude, around 8 miles outside of Amsterdam.

Reports indicate that Promes got involved in a physical altercation with his cousin which led to the production of a knife or similar bladed instrument before several other family members intervened.

The relative in question proceeded to press charges in November 2020.

After an investigation, prosecutors opted to push forward with attempted manslaughter charges as well as aggravated assault.

A court date has yet to be confirmed. If convicted, it is thought that Promes could be sentenced to anywhere between 24 and 42 months in prison. 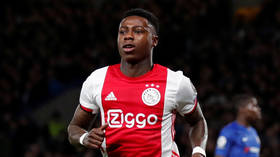 “Promes is fully focused on the upcoming matches,” Spartak Moscow announced in a statement.

“His lawyers, whom he trusts completely, are dealing with this case.

“As for media coverage, Spartak only responds to official requests from the appropriate authorities, and the club has not received any such requests.

“According to our information, the ongoing procedure continues and nothing has changed at this time.”

Telegraaf also states that if Promes is convicted the Russian club could be legally entitled to halt any further payments to his former club Ajax after he rejoined Spartak from the Dutch giants in February of this year.

The legal drama has also cost Promes his place in the Dutch national squad after head coach Louis van Gaal told the media that he won’t be considered for selection until his legal drama is behind him.

“When a player is involved in such a case, it is much more difficult for him to keep the focus on the game,” said Van Gaal last month.

“In Russia you are far away, but in the Netherlands you are very close. That’s a big difference. I don’t think I select players who are involved in these matters.”