Washington, Oregon and British Columbia agreed to work together to bring bullet trains or other forms of ultra-high-speed ground transportation to connect the major population centers of the Cascadia region.

Under a memorandum of understanding (MOU) announced at the Cascadia Innovation Corridor conference in Vancouver, B.C. on Tuesday afternoon, the U.S. states and Canadian province will form a joint policy committee to coordinate their planning and seek funding for the long-discussed initiative.

Ultimately, the goal is to get people from Portland to Vancouver, B.C., in as little as two hours. A poll released earlier this year by proponents of the concept indicated that a majority of Washington and Oregon voters support the idea.

The MOU says the newly passed U.S. Infrastructure Investment and Jobs Act and Build Back Better plan “provide a unique and timely opportunity for the Cascadia region to compete for future federal funding to support the project.” 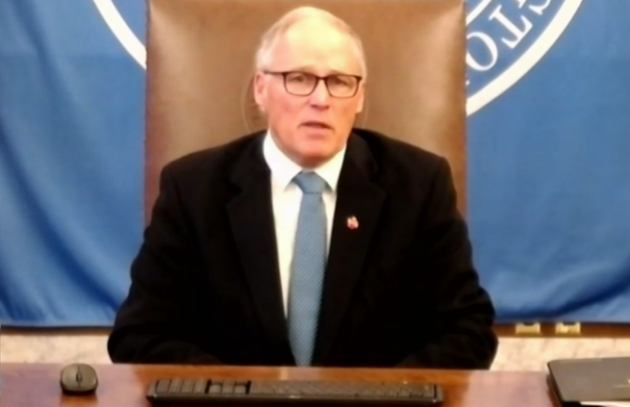 Washington Gov. Jay Inslee, one of the signatories to the MOU, said during the conference that he hopes as much as $1 billion in funding will be made available for “the major planning process up and down the coast.”

Inslee said the closure of the U.S.-Canadian border increased the recognition of the importance of the regional cross-border connection, illustrating “why all this work we’re doing on high-speed rail and everything else is so pivotal.”

Oregon Gov. Kate Brown and B.C. Premier John Horgan signed the MOU along with Inslee. The preamble cites the challenges that expected growth will bring to the Cascadia region in decades ahead. The combined population, currently about 9.5 million people, is projected to expand by 3 million to 4 million people by 2050.

These challenges “require a regional effort to develop innovative approaches to transportation, land-use and housing infrastructure that prioritize equity and sustainability while decreasing greenhouse gas emissions,” the MOU reads.

At the same time, the MOU acknowledges its own symbolic nature, saying it “shall have no legal effect or impose a legally binding obligation on the state of Washington, the Province of British Columbia or the state of Oregon.” 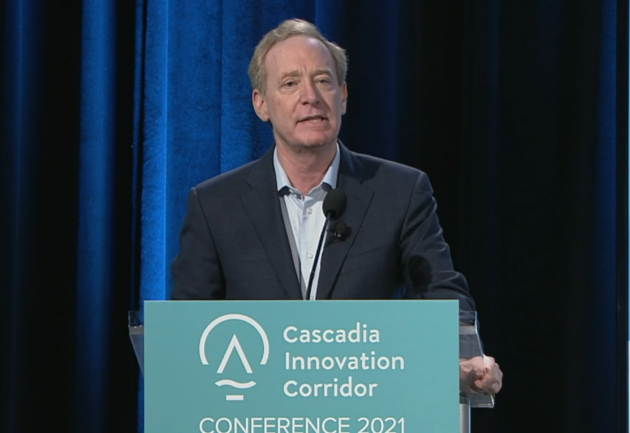 High-speed transportation supports the goal of spreading growth out, supporting housing affordability and addressing the challenge of homelessness, said Microsoft President Brad Smith in his keynote address at the event.

The agreement comes as global events demonstrate the challenge of moving through the region even today. Canada reopened its border to vaccinated Americans easing the restrictions imposed at the onset of the COVID-19 pandemic.

Destructive storms and torrential rain ripped through the region on Monday, just as corporate and government leaders attempted to travel from the U.S. to Canada for the fifth annual conference.

Former Washington Gov. Chris Gregoire, a host of the conference and CEO of Challenge Seattle, said she tried multiple highways and backroads without success. 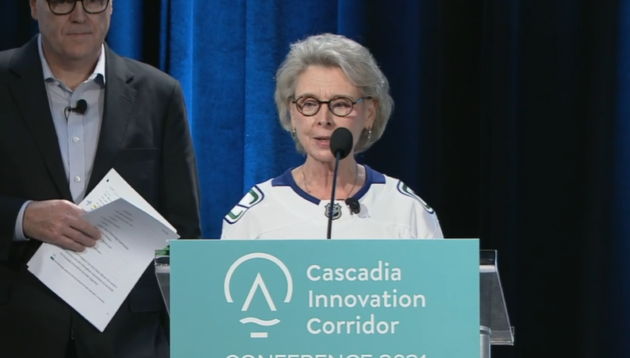 Former Washington Gov. Chris Gregoire, a host of the conference and CEO of Challenge Seattle, opens the Cascadia Innovation Corridor Conference with Greg D’Avignon, CEO of the Business Council of British Columbia. (Screenshot via webcast.)

“I went to places I’ve never heard of, or never been in, and don’t intend to go back,” Gregoire recalled as she opened the conference. “And then I gave up, drove back to Sea-Tac, got myself a room and flew up here this morning.”

Cross-regional connections are already strong, if sports smack-talk is any indication.

Appearing on stage with Greg D’Avignon, CEO of the Business Council of British Columbia, Gregoire wore a Vancouver Canucks jersey, making good on the bet she lost to D’Avignon when the Canucks beat Seattle’s new NHL franchise, the Kraken, 4-2, in their first regular-season matchup on Oct. 23.

In a subsequent session with Inslee, B.C. Premier Horgan joked that it was important to improve the cultural connections in the Cascadia region “so that the Kraken can get better over time.”

Why Health-Care Workers Are Quitting in Droves

Jil Sander Ski Wear, Coming to a City Block Near You

‘The Brutal Death of a Child’s Dream’ — Global Issues