Meet Ji-Young! The first Asian American character to move to one of the most famous addresses in the world – Sesame Street.

The Korean American puppet is seven years old, and loves rocking out on her electric guitar and skateboarding.

Sesame Street’s writers say they hope she helps young Asian and Pacific Islander children to feel they feel at home in America as much as anyone else.

Kathleen Kim, who is the puppeteer behind Ji-Young says she hopes her character can help teach children is how to be a good “upstander” – a person who stands up against things like bullying, racism and hateful attitudes or behaviours. 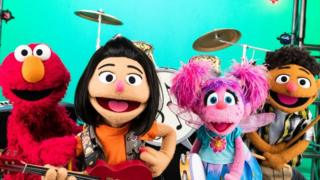 Ji-Young will be introduced to the gang as part of the See Us Coming Together special.

“My one hope, obviously, is to actually help teach what racism is, help teach kids to be able to recognise it and then speak out against it”, she said.

“But then my other hope for Ji-Young is that she just normalises seeing different kinds of looking kids on TV.”

Ji-Young’s introduction to the popular children’s show is considered even more important following reports of an increase in anti-Asian hate crimes since the start of the Coronavirus pandemic.

In the special episode, Ji-Young tells her friends that someone told her to “go home”, which leads her to talk to trusted adults about anti-Asian racism.

What is a hate crime?

“Hate crimes are acts of violence or hostility directed at people because of who they are.”

A hate crime is a criminal offence, which means that it is against the law.

Ji-Young is said to be keen to show her new neighbours important and interesting elements of Korean culture such as the food.

This is not the first time a character on Sesame Street has been introduced with the aim of helping children understand and celebrate diversity in the world.

Previous characters have included a puppet who has autism and a homeless puppet.

Here are some more examples of moments that children’s TV shows introduced groundbreaking characters or celebrated people who are different.

The Story of Tracy Beaker 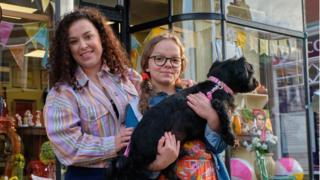 Tracy now has a daughter of her own in the latest series, ‘My Mum Tracy Beaker’

Jacqueline Wilson’s book The Story of Tracy Beaker was adapted into a TV show in 2002, and was a huge moment for many people as it told the story of children in care.

Prior to this, young people who were a part of the care system were often stereotyped – portrayed as “troubled” children.

But Tracy Beaker and The Dumping Ground helped to show that there are lots of different reasons behind a child needing to be in a care or foster home. 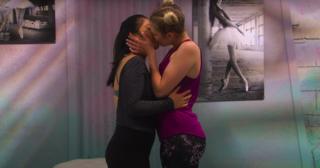 In July 2020, two female characters, Jude and Cleo from ‘The Next Step’, kissed.

It was seen as a big moment as it was the first same-sex kiss to air on CBBC in the UK.

Many people said it was an important moment for LGBTQ+ rights and for representation.

One viewer said, “This it honestly makes me so happy because I know there are kids out there who will feel less alone”. 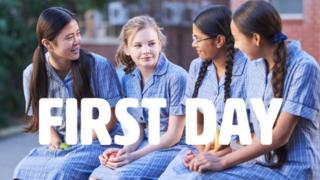 Evie MacDonald – second from the left – became the first trans actor to play the lead role in an Australian TV series.

When Evie MacDonald first appeared on Australian TV as Hannah in the children’s drama series, First Day, she became the first trans actor to play the lead role in a scripted TV drama in the country’s history.

The series was shown on CBBC not long afterwards and became a huge hit with audiences.

The show follows Hannah as she joins a new school, but is bullied for being transgender.