Visiting the island of Cordona to pay respects to his late mother, it takes a young Sherlock Holmes no more than 30 minutes to discover a dead body and a case ripe for solving. It isn’t much more than a tutorial, designed to introduce you to Frogwares’ usual detective mechanics. However, it’s also the first example of how Sherlock Holmes Chapter One is bigger, but not necessarily better than its two recent predecessors. While what fans have come to love still remains, it’s impeded by frustrating new features and major technical drawbacks in a dull open world.

This is a much younger and boisterous Holmes; an inexperienced one compared to his persona in Crimes & Punishments and The Devil’s Daughter. There’s a swagger about him, which can only really go one of two ways: you either love or loathe him. His personality is apparent in story-focused cutscenes and conversations, but the skills which eventually make him one of history’s greatest ever detectives still dictate the form and structure of Chapter One.

A worrying amount of crime is being committed on Cordona, and Sherlock just so happens to be in the right place at the right time to work out the perpetrators. The main narrative explores the suspicious circumstances surrounding his mother’s death, and lots of side cases provide reasoning to tour the island. All of them are solved in the Mind Palace, which returns from previous entries. Using this feature, you’ll link together clues and evidence to form your own deduction of what happened and then go on to accuse someone of illegal activity. 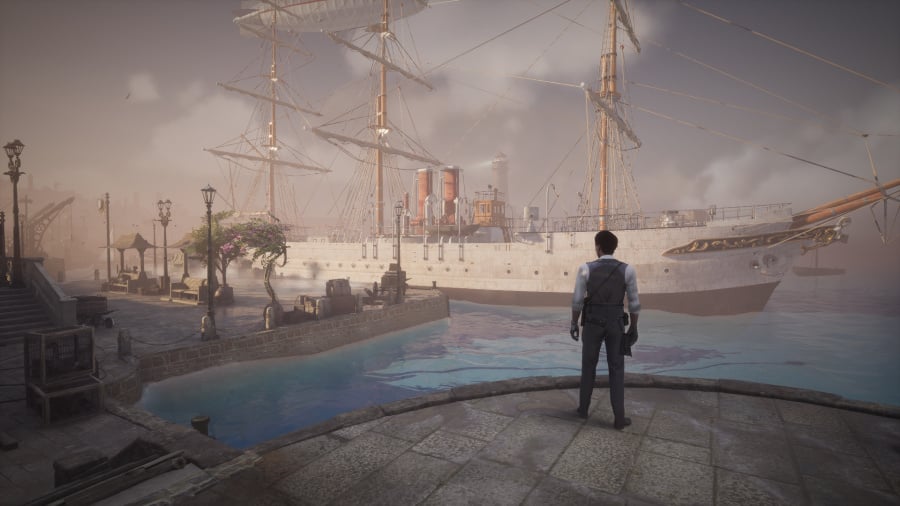 None of this is news to returning players, but it’s important to note the feature remains solid all these years later. There’s nothing else quite like the Frogwares approach — being able to sweep crime scenes for clues, then dictate how they’re interpreted to form your own conclusion is an enjoyable process. The game then fully implements the resource search options of the developer’s last title, The Sinking City. Head to the police station, town hall, or local newspaper to search their archives using specific terms. It’s everything the Ukrainian studio has done at once; you could say this is the team’s definitive detective experience as a result.

Well, we wish we could say that. What Frogwares has already built in the past is entirely sound in Sherlock Holmes Chapter One. However, it’s the new features and mechanics designed to take things to the next level that begin to harm what was robust footing.

One of them revolves around eavesdropping. You’ll be given a question, and it’s your job to work out whether what NPCs are saying relates to the answer. In reality, vague phrases are presented on screen and it’s essentially a game of trial and error to work out if they’re important or not. We had to repeat these frustrating sequences over and over again just to work out what should actually be selected. It’s all very unintuitive, especially when you’re up against a time limit. Expect to have to repeat these continuously in order to make progress. 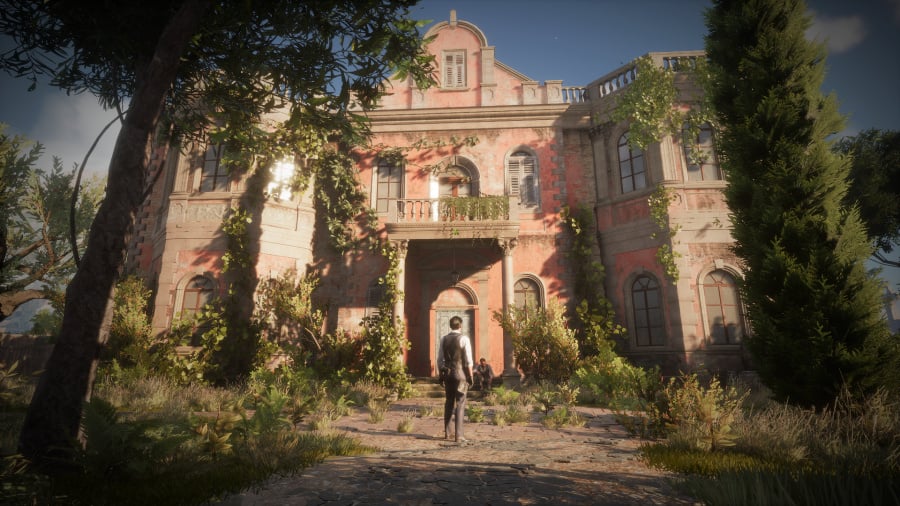 Then there’s a sort of detective vision ala Batman: Arkham Asylum or The Witcher 3: Wild Hunt that only works with certain clues. It requires you to spot hovering circles in the environment which eventually spell out extra information on a place or thing, but they can be quite difficult to notice. You’re good once they’re in your eyesight, eventually leading to scenes where you can recreate acts of crime, but just getting to that point is a much tougher task than it needs to be. If you miss one of them (and they are easy to miss), then you could spend a good chunk of time aimlessly wandering a location before stumbling upon what needs to be done next. Past Frogwares games have tried something similar in the past, but this particular effort doesn’t quite work out.

It’s not all bad, though. The game comes with a laundry list of customisable disguises that decide whether a character will talk to you or not, and it’s one of the few positive steps forward Frogwares takes. This is a much deeper system than something like Hitman; you can change individual parts of your outfit like hats, make-up, facial hair, and glasses. Required to gain access to new areas and convince NPCs to hand over information they otherwise wouldn’t, it’s a neat inclusion that stands out as one of the things the game does best.

Another major addition to the Sherlock Holmes formula is combat, and we could probably take it or leave it. These scenarios are completely serviceable — better than combat in The Sinking City, even if that’s not a particularly high bar to clear — but they’re not particularly thrilling. You’re supposed to be arresting criminals instead of killing them, which turns your bullets into apparatus designed to distract guards so you can rush up on them and slap handcuffs on their wrists. Sherlock isn’t a police officer, but he’s been given permission to act like one. Don’t ask. 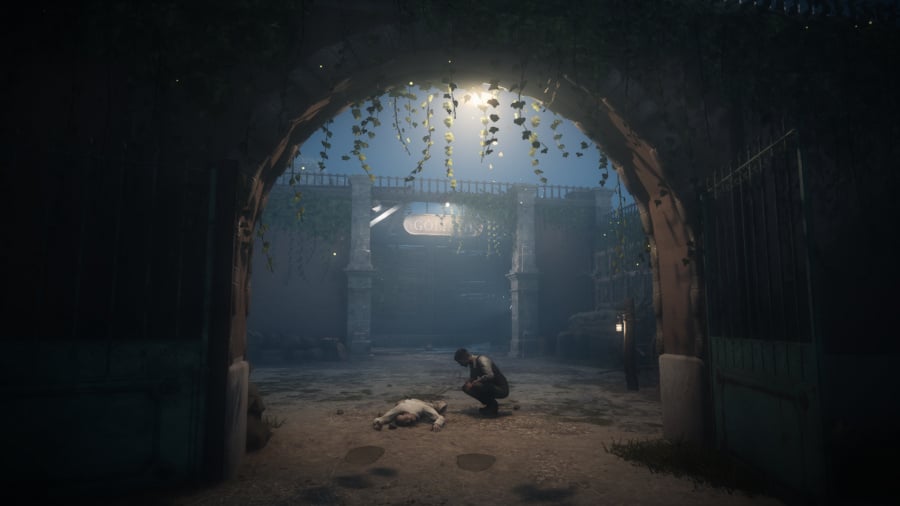 Anyway, it can be a little tedious manipulating an enemy into a specific spot so you can shoot a nearby gas pipe to temporarily stun them. But aiming feels adequate and a forgiving checkpoint system gets you right back in the action should you fail. While it may not always suit the tone, combat is at least decent.

Bandit Lairs are what you’ll need to search for in the open world if you want to finish every gunfight, but they’re easy to spot on the map since there’s so little else to do outside of solving cases. Frogwares has once again opted to tell its story in a large open world full of different districts, except it doesn’t have the budget to fill it full of interesting things to look at and engage with. There are no random encounters, world events, or dynamic NPCs to distract you. It would be unfair to expect a developer of this size to accomplish all that, but then the open world feels empty as a result. The linearity of Crimes & Punishments is still the best structure for a Sherlock Holmes title. 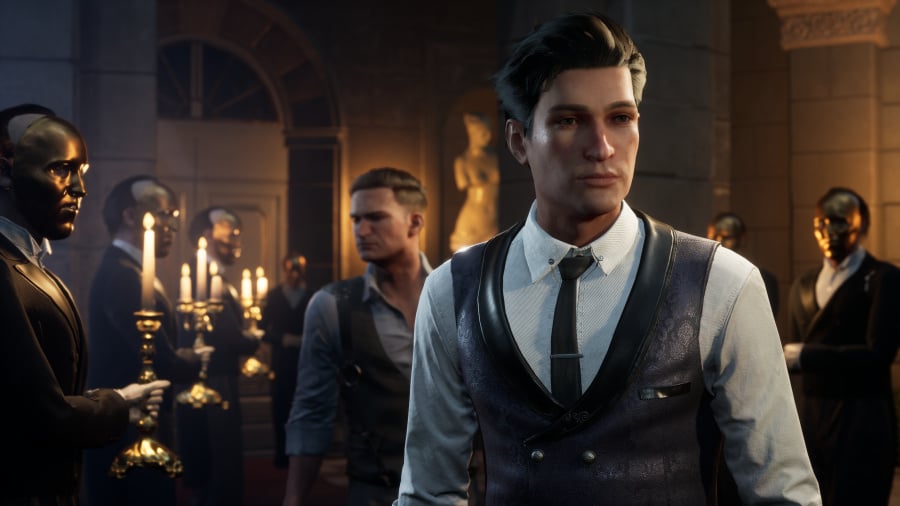 What makes matters worse is that it’s out in the open world when the game is at its worst technical wise. The frame rate tries to hit 60 but rarely achieves it for any acceptable length of time as severe drops make traversing the map a chore. It’s an incredibly choppy experience, worsened by constant visual glitches that leave thin white lines on the corners of buildings. Texture pop-in is aplenty, and random NPCs look like they’ve been ripped right out of the PS3 era. Then there are some poor animations and faulty transitions between them.

Sherlock Holmes Chapter One should, on paper, be the best game out of Frogwares yet. It brings back all those satisfying detective features of the past and couples them with new mechanics and interactions. However, many of them are either surplus or frustrating enough to where they sometimes detract from the overall experience. And with a lifeless open world that doesn’t run particularly well at even the best of times, it’s not an easy recommendation. What fans loved from past Sherlock Holmes instalments is still there, but you’ll need to do a bit of overtime to find it.

Microsoft execs accused of misconduct by dozens of staff

How Behind the Frame’s animation makes you feel at home – PlayStation.Blog

Battlefield 2042 early review: a step below the series’ high points