In a remote corner of Brazil’s Amazon rainforest, researchers have spent decades catching and measuring birds in a large swath of forest unmarred by roads or deforestation. An exemplar of the Amazon’s dazzling diversity, the experimental plot was to act as a baseline that would reveal how habitat fragmentation, from logging or roads, can hollow out rainforests’ wild menagerie.

But in this pristine pocket of wilderness, a more subtle shift is happening: The birds are shrinking.

Over 40 years, dozens of Amazonian bird species have declined in mass. Many species have lost nearly 2 percent of their average body weight each decade, researchers report November 12 in Science Advances. What’s more, some species have grown longer wings. The changes coincide with a hotter, more variable climate, which could put a premium on leaner, more efficient bodies that help birds stay cool, the researchers say.

“Climate change isn’t something of the future. It’s happening now and has been happening and has effects we haven’t thought of,” says Ben Winger, an ornithologist at the University of Michigan in Ann Arbor who wasn’t involved in the research but has documented similar shrinkage in migratory birds. Seeing the same patterns in so many bird species across widely different contexts “speaks to a more universal phenomenon,” he says.

Biologists have long linked body size and temperature. In colder climates, it pays to be big because having a smaller surface area relative to one’s volume reduces heat loss through the skin and keeps the body warmer. As the climate warms, “you’d expect shrinking body sizes to help organisms off-load heat better,” says Vitek Jirinec, an ecologist at the Integral Ecology Research Center in Blue Lake, Calif.

Many species of North American migratory birds are getting smaller, Winger and colleagues reported in 2020 in Ecology Letters. Climate change is the likely culprit, Winger says, but since migrators experience a wide range of conditions while globe-trotting, other factors such as degraded habitats that birds may encounter can’t be ruled out.

To see if birds that stay put have also been shrinking, Jirinec and colleagues analyzed data on nonmigratory birds collected from 1979 to 2019 in an intact region of the Amazon that spans 43 kilometers. The dataset includes measurements such as mass and wing length taken from 1979 to 2019 for over 11,000 individual birds of 77 species. The researchers also examined climate data for the region. 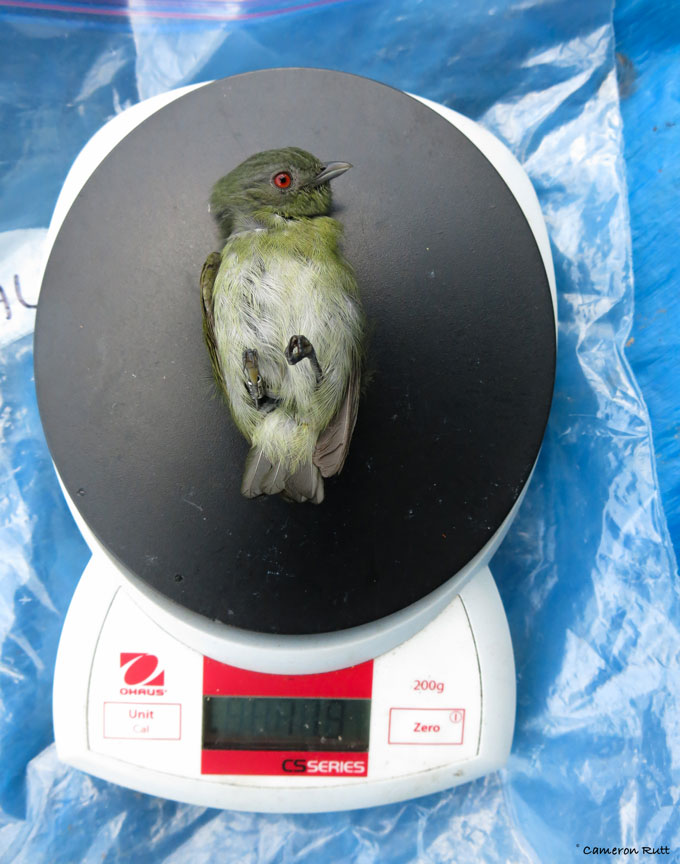 By taking careful measurements of tropical birds, such as this white-crowned manakin (Pseudopipra pipra), researchers tracked shifts in body size over 40 years.Cameron Rutt

All species declined in mass over this period, the researchers found, including birds as different as the Rufous-capped antthrush (Formicarius colma), which snatches insects off the forest floor, and the Amazonian motmot (Momotus momota), which scarfs down fruit up in trees. Species lost from about 0.1 percent to nearly 2 percent of their average body weight each decade. The motmot, for example, shrunk from 133 grams to about 127 grams over the study period.

These changes coincided with an overall increase in the average temperature of 1 degree Celsius in the wet season and 1.65 degrees C in the dry season. Temperature and precipitation also became more variable over the time period, and these short-term fluctuations, such as an especially hot or dry season, better explained the size trends than the steady increase in temperature.

“The dry season is really stressful for birds,” Jirinec says. Birds’ mass decreased the most in the year or two after especially hot and dry spells, which tracks with the idea that birds are getting smaller to deal with heat stress.

Other factors, like decreased food availability, could also lead to smaller sizes. But since birds with widely different diets all declined in mass, a more pervasive force like climate change is the likely cause, Jirinec says.

Wing length also grew for 61 species, with a maximum increase of about 1 percent per decade. Jirinec thinks that longer wings make for more efficient, and thus cooler, fliers. For instance, a fighter jet, with its heavy body and compact wings, takes enormous power to maneuver. A light and long-winged glider, by contrast, can cruise along much more efficiently.

“Longer wings may be helping [birds] fly more efficiently and produce less metabolic heat,” which can be beneficial in hotter conditions, he says. “But that’s just a hypothesis.” This body change was most pronounced in birds that spend their time higher up in the canopy, where conditions are hotter and drier than the forest floor.

Whether these changes in shape and size represent an evolutionary adaptation to climate change, or simply a physiological response to warmer temperatures, remains unclear (SN: 5/8/20). Whichever is the case, Jirinec suggests that the change shows the pernicious power of human activity (SN: 10/26/21).

“The Amazon rainforest is mysterious, remote and teeming with biodiversity,” he says. “This study suggests that even in places like this, far removed from civilization, you can see signatures of climate change.”

How to sort data by multiple columns in Excel