The proof-of-work (PoW) consensus model is the mechanism that kicked off the revolution that launched Bitcoin (BTC) in 2009 and it was the model of choice behind many of the popular projects in the early fledgling years of the crypto ecosystem.

As time progressed, other consensus models like proof-of-stake (PoS) rose in popularity, especially as the cost of running mining rigs, the constant need to update equipment and environmental concerns led to the PoW model falling out of favor with many.

As a result, projects looking to employ a proof-of-work model have had to adapt to stay aligned with the demands of the wider market. This has led to the emergence of projects that offer a more environmentally and economically friendly approach to PoW, while also aiming to build Web 3.0.

Let’s take a look at some of the projects that allow people to contribute their resources toward securing the network and earn a yield in the process.

Helium is a decentralized blockchain-powered network for the Internet of Things (IoT) devices that utilizes a global network of low-energy wireless “hotspots” that broadcast data via radio waves to be recorded on its blockchain.

The network uses a new work algorithm that has been dubbed “proof-of-coverage” to validate that hotspots are providing legitimate wireless coverage and that miners receive the platform’s native HNT token for helping to provide coverage for the network.

The Helium network saw tremendous growth throughout 2021. Currently, there are more than 309,000 nodes in operation.

More recently, the Helium network expanded its capabilities by adding support for 5G wireless capabilities which included the launch of a new line of miners capable of transmitting the 5G signal.

On Oct. 26, Helium announced that it had partnered with the satellite television company Dish Network, making Dish the first major carrier to join the Helium network and offer its subscribers the opportunity to run Helium nodes in exchange for HNT tokens. 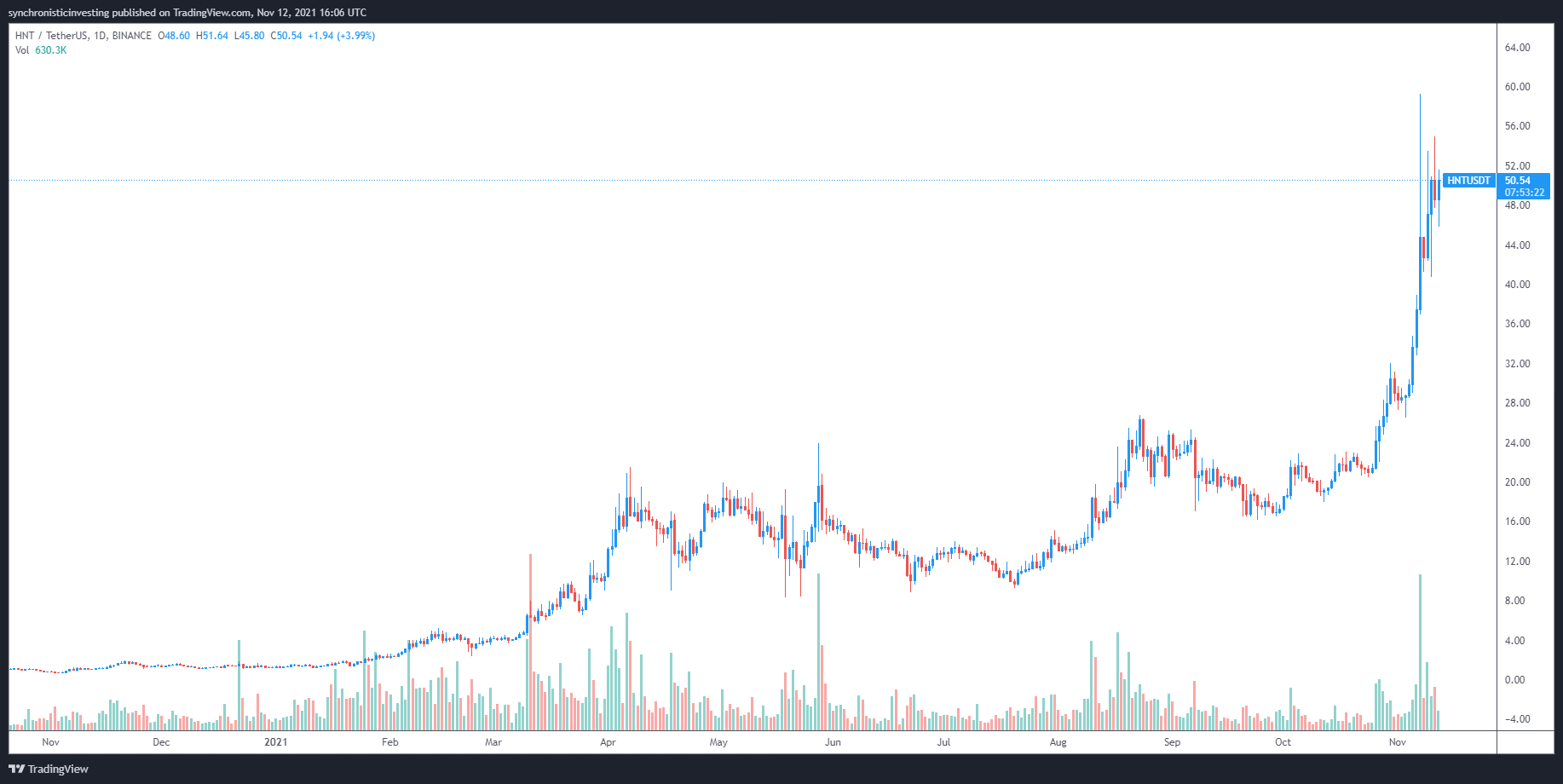 Shortly after these developments, HNT price rallied to a new all-time high at $53.11 on Nov. 9.

Kadena (KDA) is a scalable PoW layer-one blockchain protocol that claims to be capable of processing up to 480,000 transactions per second (TPS) thanks to the use of braided chains.

Being smart contract capable means that the Kadena network is capable of hosting decentralized finance (DeFi) and nonfungible token (NFT) protocols, as well as a host of other specialized projects from stablecoins to payment processors.

Some of the goals of the project have been to address the major issues plaguing the Ethereum network such as high transaction costs and network congestion, and claims to offer marginal transaction fees for consumers while also introducing a “crypto gas station” feature that lets businesses create accounts that exist to fund gas payments on behalf of its user base when certain conditions are met.

Kadena utilizes the Blake (2s-Kadena) algorithm as its consensus model which requires native ASIC miners and cannot be mined using GPUs or CPUs.

Recently, KDA launched a wrapped version of its token called wKDA that is capable of interacting with all Ethereum Virtual Machine- (EVM-) compatible networks and their associated DeFi protocols.

In the future, the team behind Kadena also has plans to add cross-chain support for other popular blockchain networks including Terra, Polkadot, Celo and Cosmos. 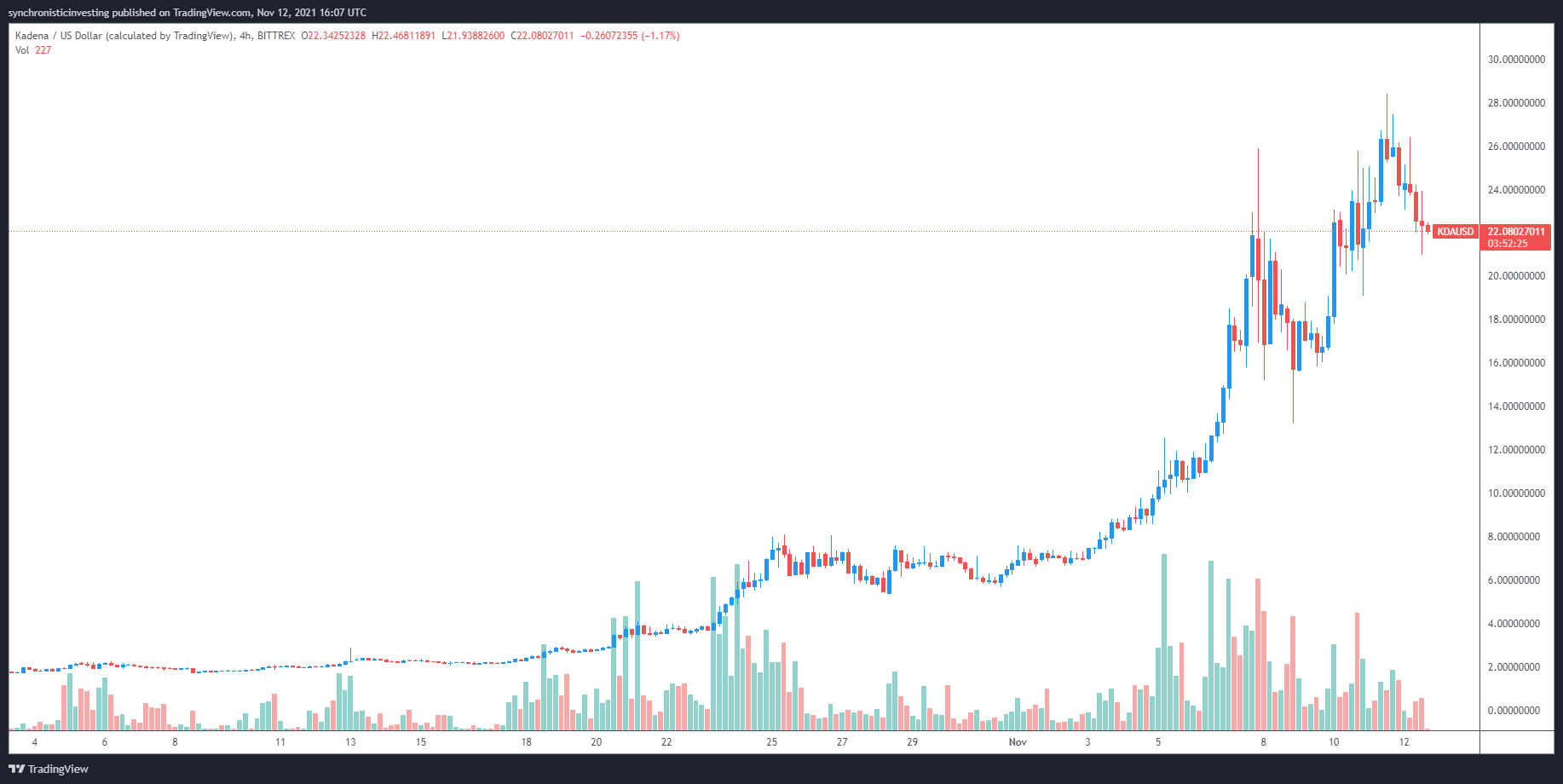 Flux (FLUX) is a native GPU mineable PoW protocol that is focused on scalable decentralized cloud infrastructure for Web 3.0 applications.

According to the project, the Flux ecosystem is comprised of a suite of decentralized computing services and blockchain-as-a-service solutions which offer an Amazon Web Services-like development environment, as well as the FluxOS second-layer operating system that is capable of running “any hardened dockerized application.”

The Flux network uses the ZelHash algorithm, which is a GPU minable implementation of Equihash 125,4 and can be mined through a Flux community pool or on a variety of third-party pools created by teams that support the Flux mining ecosystem.

The block time on the Flux network is two minutes and the current block reward is 75 Flux, with 50% going to node operators and 50% going to miners.

On Nov. 9, the project introduced “Light Nodes,” which enable Flux nodes to be managed using light wallets so that operators can start and monitor node metrics from any device capable of running the FluxNodes app. 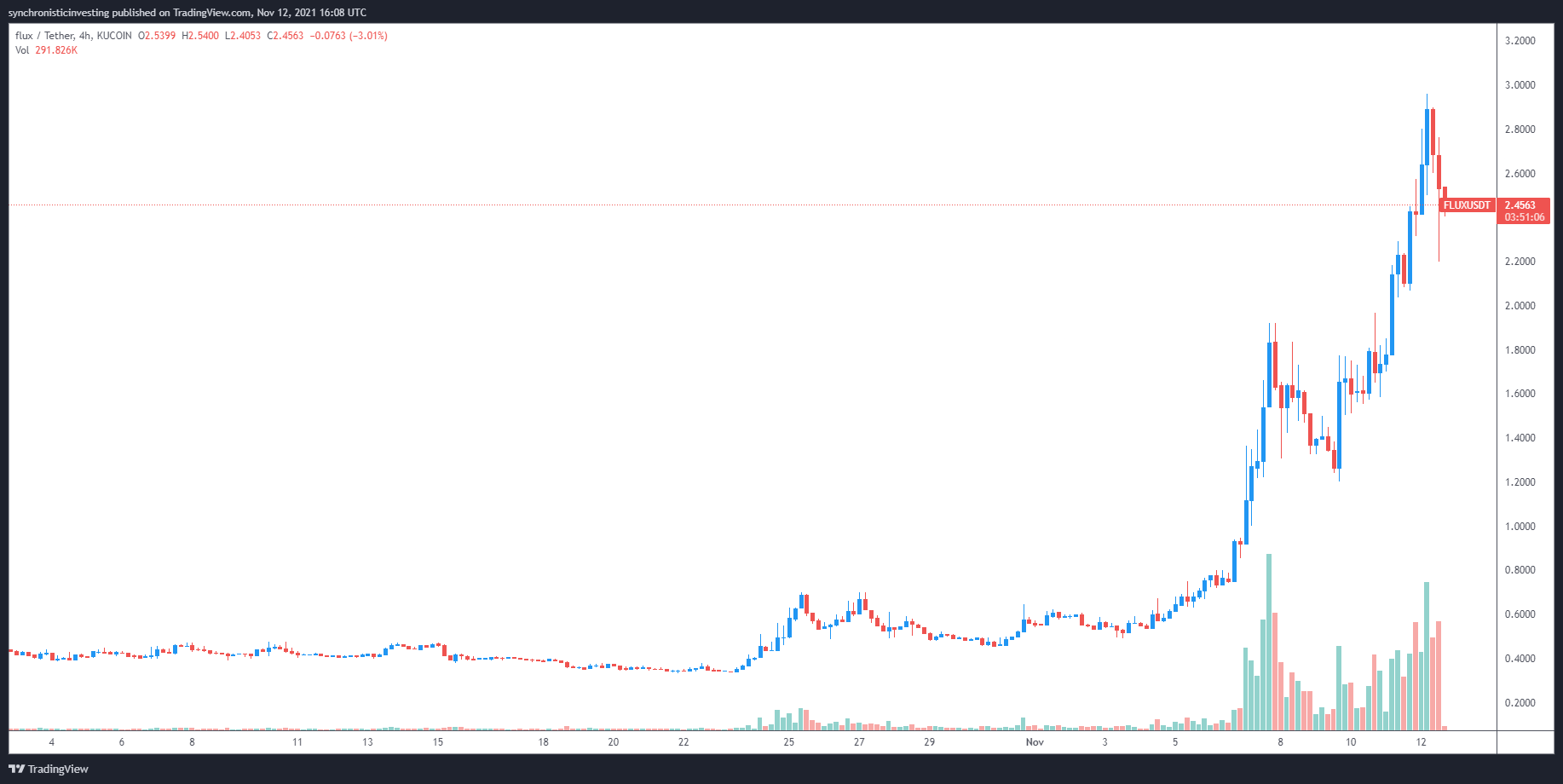 Data from Cointelegraph Markets Pro and TradingView shows that since Oct. 24 when it was revealed that Apple Pay would be integrated with the Flux network’s Zelcore wallet, the price of FLUX has surged 802% from $0.33 to a new all-time high at $2.96 on Nov. 12.

While the PoW model of consensus is no longer the dominant model used by major projects in the crypto ecosystem, these three examples show that it still has a lot to offer because the new platforms are environmentally friendly and economically sustainable.

Want more information about trading and investing in crypto markets?

CoinDesk 20 Update: ATOM, ICP and SOL Are In; AAVE, GRT and UNI Are Out

Bitcoin has stalled, but here’s why pro traders still expect $80K by January