NFL star Aaron Rodgers is at the center of a media firestorm after admitting he misled people about his vaccination status, but such a public figure can hardly be blamed for being wary of releasing personal medical information.

Green Bay Packers star Rodgers, who is the reigning NFL MVP, is among the most high-profile athletes in the United States. With that comes an intense media glare, some of which, to be fair, is stoked by Rodgers himself, such as his stint guest-hosting the gameshow ‘Jeopardy!’ as well as his relationships with the likes of actress Olivia Munn, NASCAR driver Danica Patrick, and, most recently, fiancée Shailene Woodley.

Tabloid talk and media whispers come with the territory of being one of the best-paid athletes in America. It is a necessary evil part and parcel with being a star quarterback – and for the most part, it is a role that Rodgers relishes as he attracts countless sponsorship dollars to add to his already inflated salary.

But a blurred line exists between what sports fans are entitled to know and what they expect to know about their favorite sports star’s health. Sure, if Rodgers has an elbow injury which could threaten to keep him from the field, that is relevant information for fans and oddsmakers alike – but does Rodgers owe anyone a full disclosure of his decision to best protect himself against Covid-19?

His family do, and perhaps his teammates too – but what about the nameless, faceless mob on Twitter? The ongoing pandemic has introduced a whole new level of divisiveness into popular culture, where people are now wholly defined by what remains a personal medical choice and those who signal these choices are rabble-roused by dissenting opinions.

Choose to take the jab? Then you’re a ‘snowflake’. Opt against it? You’re a right-wing acolyte.

As ever, the truth lies somewhere in between these two positions – but the clear truth remains that Aaron Rodgers should be under no public pressure to disclose anything related to his health that isn’t a run-of-the-mill sporting injury.

The Rodgers scandal took place against the backdrop of incredibly strict vaccines mandates within the NFL. While it isn’t strictly compulsory to receive a jab if you are one of he league’s near 1,700 players, it heavily suggested that they do, lest they avoid the wrath of the league and a litany of fines for even the smallest infraction.

Some players, such as anti-vax firebrand Cole Beasley, have opted to publicly bemoan the NFL’s policy; others have openly supported it. And in the case of fully vaccinated Minnesota Vikings player Dakota Dozier, none of it really mattered.

With 1,700 players comes 1,700 opinions. And it was Rodgers’ stance, evidently, to keep his information to himself before an intense media glare revealed his true status: he was, and is, unvaccinated.

But to be clear, Rodgers remains the author of some of his own misfortune. He now admits that he misled reporters by claiming he was “immunized” against Covid-19 when asked in August if he was vaccinated which, while he was seeking alternate remedies against Covid-19, was a half-truth at best.

Rodgers has admitted his mistake in this regard and now says he wishes he had just come clean in August when initially pressed on the mater.

But this is the crux of the issue. Rodgers, regardless of his reputation in the sports world, is clearly uncomfortable with disclosing this type of information to be picked apart by a vengeful mob on social media and his newfound desire to just have relented back in August speaks to the intrusive nature of this brand of vaccine McCarthyism: take the shot or face the consequences, and God help you if you’re on the wrong side of public opinion. 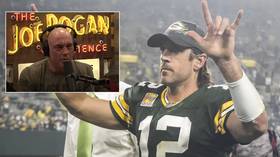 Where is that aforementioned line? No one argues that medical information related to football injuries is fair game to be disseminated in the media. But what of mental health treatment? Fertility issues?

Of course, some will point out that neither of these are contagious – and they’re correct – but the fact remains that Aaron Rodgers, the superstar quarterback and one of the finest NFL players of his generation, should be under no more pressure to answer questions about his vaccine preferences than a beer-guzzling fan wearing a ‘Rodgers 12’ jersey in your local sports bar.

Ask him after a few too many if he’s vaccinated and you’re liable to get a smack in the mouth in certain circumstances. Ask the man whose jersey he wears and it leads to national headlines.

Look, Aaron Rodgers could certainly have handled this situation better. And it definitely wasn’t helped by the natural sense of arrogance that Rodgers has always displayed. Time will tell if he one day opts to change his mind on getting jabbed.

Maybe his alternative remedies are snake oil, maybe there’s something to them. Perhaps the wisdom of relying on Joe Rogan for epidemiological advice will be proven wrong in future, with the pursuit of Ivermectin and monoclonal antibodies in place of Pfizer or Johnson & Johnson.

But that is Aaron Rodgers’ decision to make, regardless of the holier-than-thou reaction.

The statements, views and opinions expressed in this column are solely those of the author and do not necessarily represent those of RT.

The Supergirl "Stunt" That Made Mon-El Actor Dislocate His Jaw