Update 11/6: Since I wrote this column, several Macworld readers have reached out with similar issues on M1 MacBooks.

For the past 10 months, I’ve used a 13-inch M1 MacBook Pro supplied by my employer. Most days it’s great, with exceptional battery life and excellent speeds, and is an overall massive upgrade over my previous 2016 model.

But some days it’s nearly impossible to get anything done. More than any Mac I’ve owned, this MacBook regularly experiences freezes, crashes, and restarts that often seem to be related to memory issues. It’s been nearly impossible to pinpoint a pattern, but I assumed it was something installed on my machine by my company. After reading numerous reports this week about similar issues, I’m not so sure.

When Gregory McFadden tweeted that Control Center was using 26GB of the 64GB of RAM on his new MacBook Pro, the screenshot looked very familiar. While Control Center never ate up that much RAM for me, I regularly spot spikes when using Safari and Photoshop Elements and have seen more sporadic issues with Mail and other apps. Sometimes the issues cause slowdowns that work themselves out in a few minutes, other times my machine locks up and forces a restart it.

I now keep Activity Monitor open while I work and it’s rare that the memory pressure monitor isn’t yellow or red. Like most Mac users, I tend to keep several apps idling in the background—Mail, Music, Safari, Outlook, Word, etc.—but with the M1 MacBook, I often need to quit apps to free up application memory. Closing Safari tabs is a regular task necessary to free up memory and keep my machine running smoothly.

Activity Monitor often shows my memory pressure in the red.

That’s extremely similar to the MacBook Pro and Monterey issues I’ve read this week—except I’m still running Big Sur. That leads me to believe it’s a bigger problem that wasn’t as widely reported until now. Perhaps it’s because developers tend to be more hyper-aware of things like this or it’s exacerbated by the extra RAM in the new MacBook Pro, but the number of people experiencing this issue appears to be growing. And I hope Apple is paying attention.

When the M1 chip was released, Apple changed the way we think of RAM on our Macs. As in the iPhone and iPad, the memory was now affixed on the same package as the system-on-chip. The M1 Pro and M1 Max come with higher memory options, but the M1 tops out at 16GB and that’s that.

As Jason Snell wrote back when the M1 was released, that tidy system has benefits: “The M1 processor’s memory is a single pool that’s accessible by any portion of the processor. If the system needs more memory for graphics, it can allocate that. If it needs more memory for the Neural Engine, likewise. Even better, because all the aspects of the processor can access all of the system memory, there’s no performance hit when the graphics cores need to access something that was previously being accessed by a processor core. On other systems, the data has to be copied from one portion of memory to another—but on the M1, it’s just instantly accessible.” 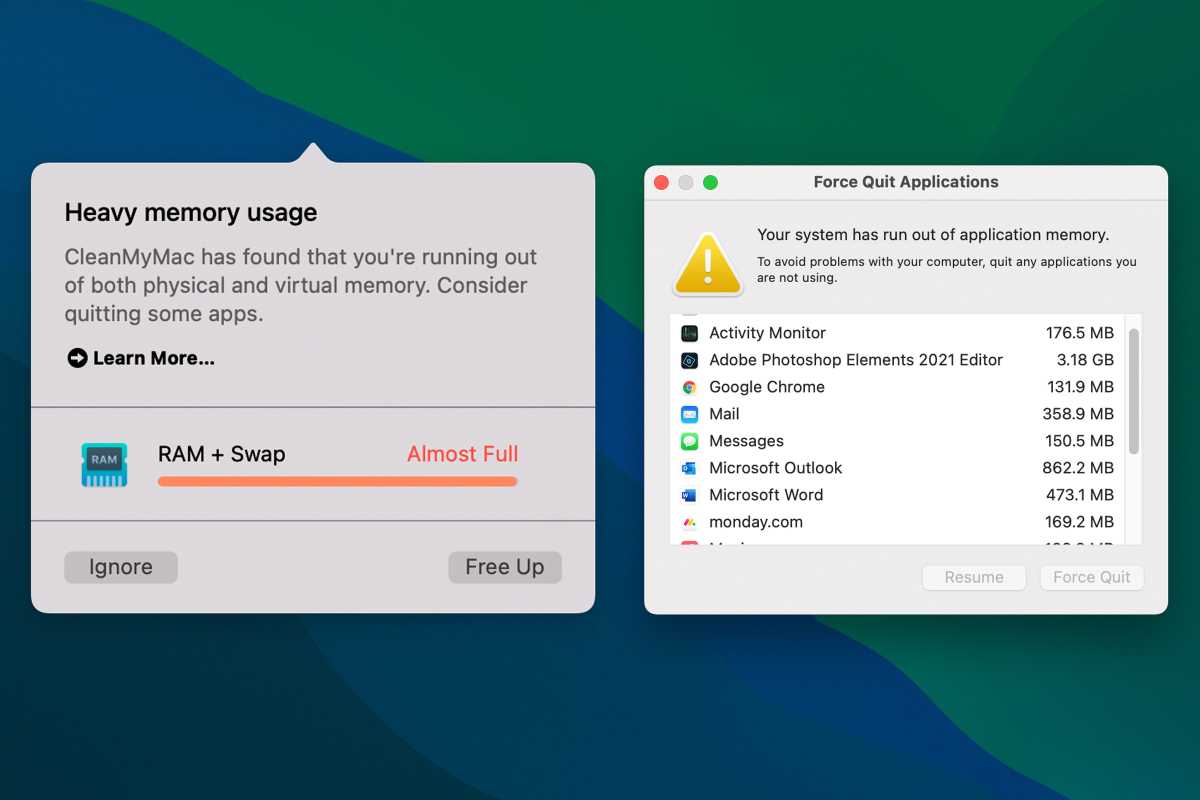 Warnings like these—which I received while I was writing this article—are common.

It’s possible that macOS isn’t managing this unified memory structure properly, and will continue to allocate RAM beyond what is available without freeing up RAM that is no longer needed. This is commonly referred to as a “memory leak.” Performance gradually deteriorates until you need to either wait for the RAM to clear, force-quit the app, or restart the machine.

Sometimes a warning will appear when no single app is even using that much memory and other times apps are seemingly using way more memory than is available. I’ve seen single websites report using as much as 20GB of RAM for no discernible reason, crippling my machine.

Safari sites spiking memory use happen on a regular basis.

Maybe now that it’s more of a widespread issue, Apple will figure it out. We’ve reached out to Apple for comment but haven’t heard back, and it’s entirely possible that Apple fixes it in a future version of macOS without ever addressing the issue publicly. That’s what happened with the excessive SSD usage earlier this year, though that Apple says that was a “data reporting error” and not an actual problem. The memory bug is an actual issue that needs to be fixed as soon as possible.

In the meantime, there are a few ways to mitigate the issue. The first is to be vigilant. As I said, keep Activity Monitor open, and when you see an app’s memory usage creeping up, address it. You can also use a third-party memory cleaner that lets you quickly clear RAM. Running that periodically will help keep your resources available. And finally, stay up to date with the latest version of Big Sur or Monterey, as a fix will hopefully arrive soon.