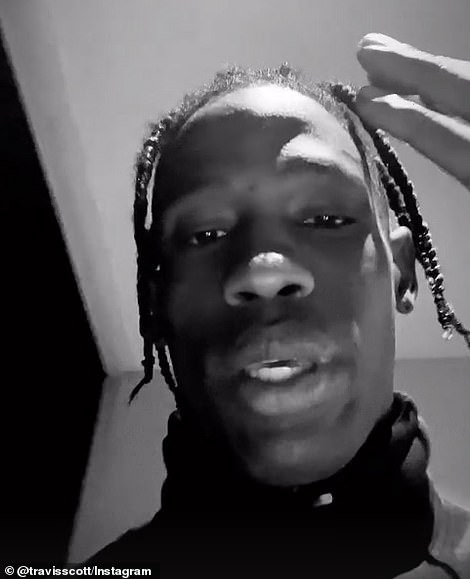 Travis Scott spoke out Saturday night after least eight people died and hundreds were injured during his concert at Astroworld Festival on Friday.

‘My fans really mean the world to me and I always want to leave them with a positive experience,’ Scott, 29, said on his Instagram stories Saturday.

‘Anytime I can make out anything that’s going on, ya know, I stop the show and you know, help them get the help they need. I could just never imagine the severity of the situation.’

The crowd at the Houston-based music festival surged toward the stage during Scott’s performance, knocking other concertgoers over and squeezing them together so tightly that they could not breathe or move their arms.

‘To the ones that was lost last night, we’re working right now to ID the families so we can help assist them through this tough time,’ the rapper shared.

‘I’m honestly just devastated… I could never imagine anything like this just happening.’

Scott said he is working closely with local authorities as they investigate the crowd surge and encouraged anyone with information about the deadly incident.

‘We’ve been working closely with everyone to just try to get to the bottom of this,’ he said. ‘If you have any information please just contact the local authorities.’

Houston Chief of Police Troy Finner claimed at a press conference Saturday that a crazed man injected at least one person with opioids during the chaos.

‘One of the narratives was that some individual was injecting other people with drugs. We do have a report of a security officer, according to the medical staff that was out and treated him last night,’ Finner said. 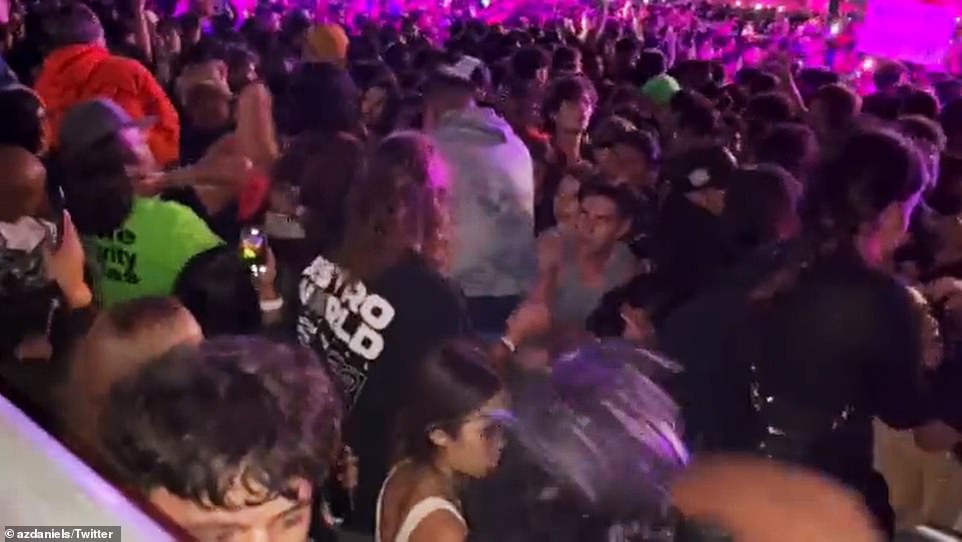 The crowd at the Houston-based music festival surged toward the stage during Scott’s performance, knocking other concertgoers over and squeezing them together so tightly that they could not breathe or move their arms 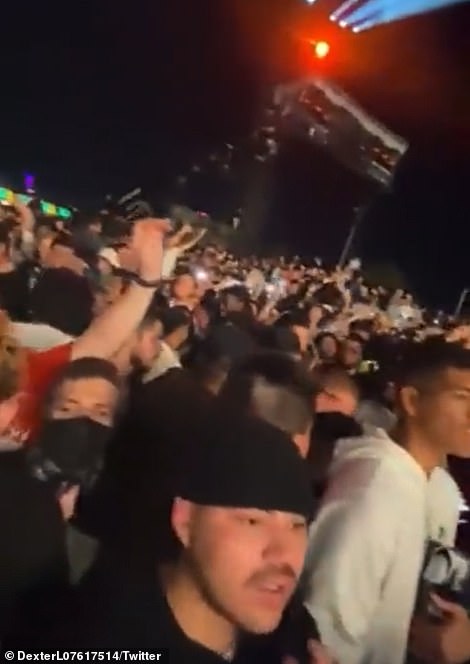 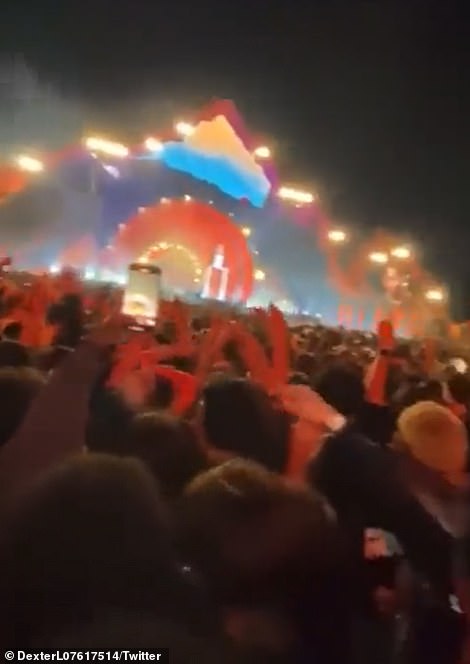 Social media video shows fans begging Travis Scott to stop his performance. The crowd chanted ‘stop the show’ as concertgoers were being knocked down and crushed by other attendees 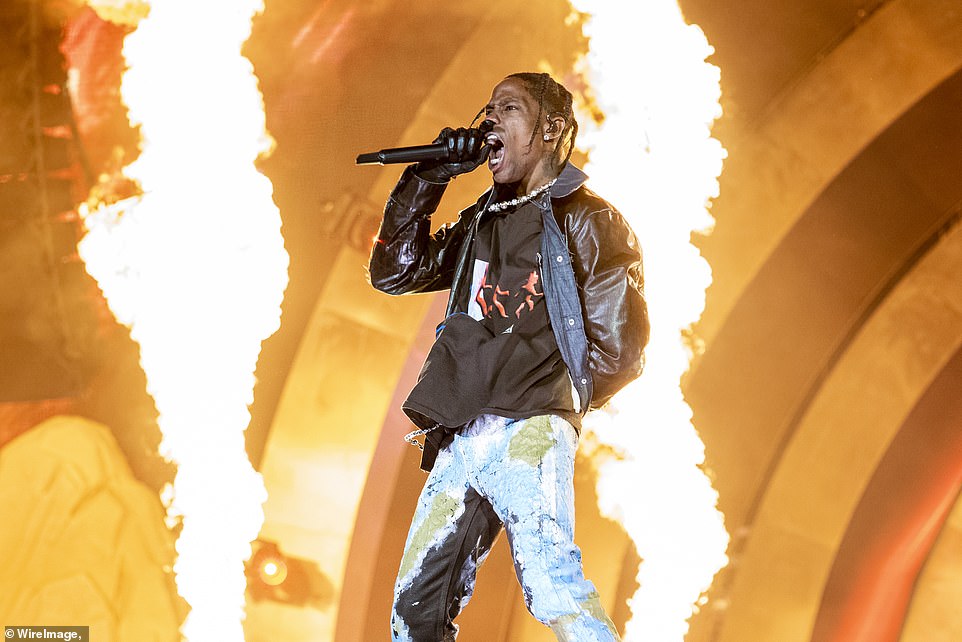 Scott, 29, continued to perform after eight people were crushed to death

‘He was reaching over to restrain or grab a citizen and he felt a prick in his neck.

‘He went unconscious, they administered Narcan. He was revived, and medical staff did notice a prick similar to a prick you would get if somebody was trying to inject,’ he added.

It is unclear what drug was injected into the security guard, although Narcan is used to revive people who’ve overdosed on opioids, including fentanyl.

There have not been any reports of concertgoers being injected with drugs.

It also remains unclear if that incident was connected to the deadly crush that also left 25 in hospital. No further updates have been given on whether the needle stabber was arrested.

Approximately 50,000 people attended the sold-out Astroworld Festival at NRG Park on Friday. Witnesses said the chaos broke out after Scott took the stage to perform.

Scott, 29, continued to perform after eight people were crushed to death – including two victims aged just 14 and 16 – in what one witness described as a ‘floor of bodies’.

Video circulating on Twitter shows fans chanting ‘stop the show’ as concertgoers were being knocked down and crushed by other attendees. 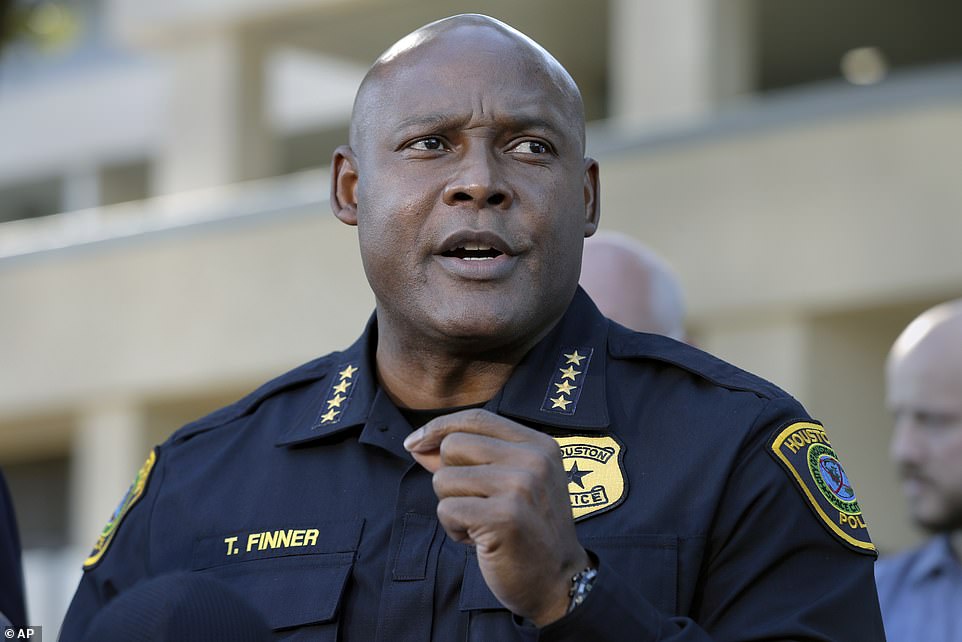 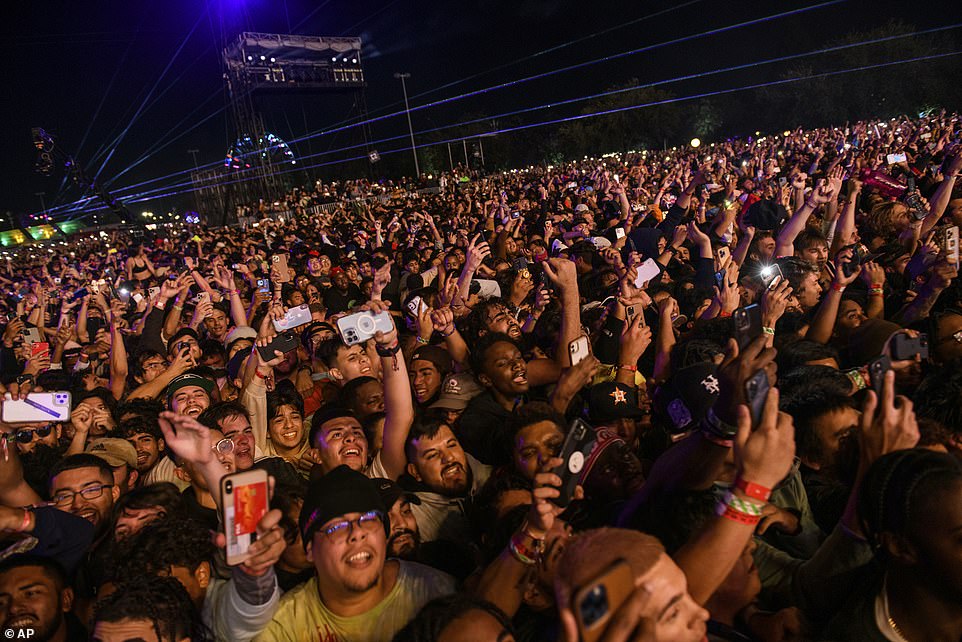 Approximately 50,000 people attended the sold-out Astroworld Festival at NRG Park on Friday. Witnesses said the chaos broke out after Scott took the stage to perform 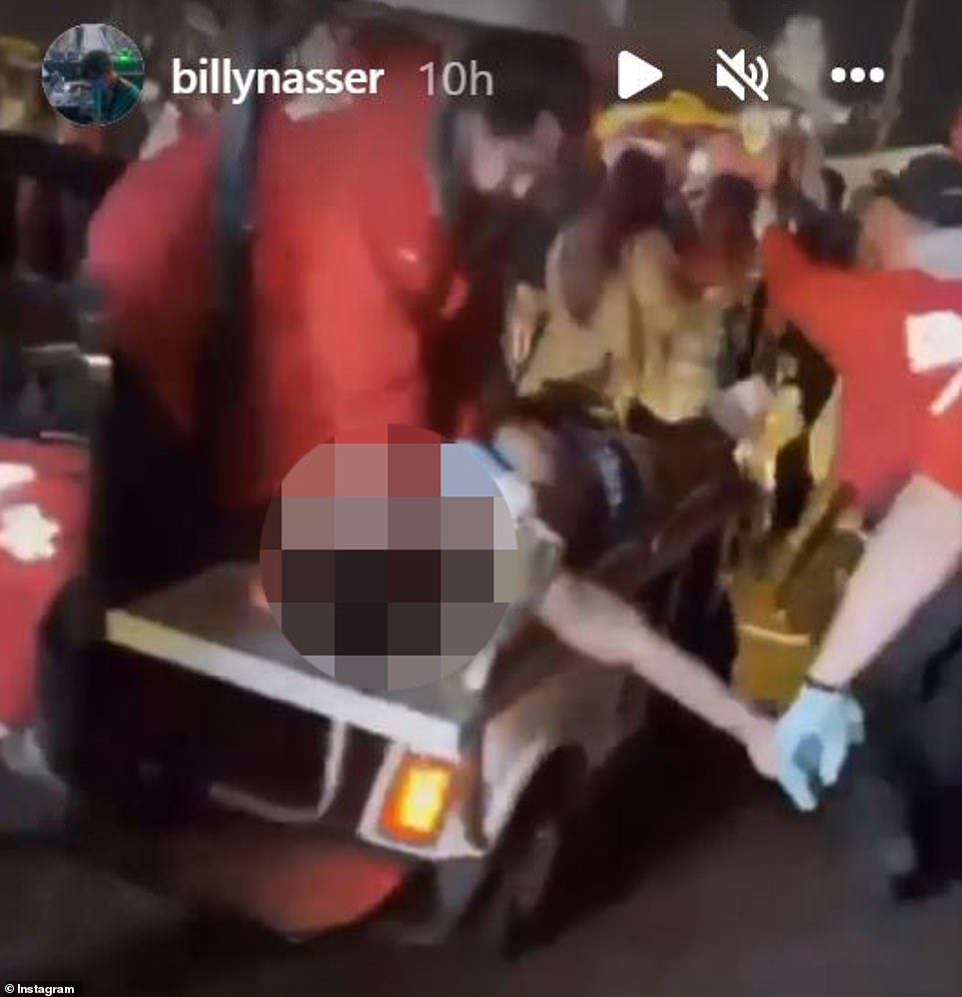 Although he completed his 75-minute performance, at one point Scott was filmed calling for help. In another video he stood on a platform with his microphone while chaos unfolded beneath him.

Houston Mayor Sylvester Turner revealed during a press conference Saturday that the dead ranged in age from 14 to 27.

Turner also said that 25 people in total were transported to the hospital after the ‘tragic event’ and 13 are still hospitalized, including five that are under the age of 18.

‘We will probably be at it for quite some time to determine exactly what happened,’ the mayor explained.

Houston Police executive assistant Chief Larry Satterwhite, who was near the front of the crowd, said the surge ‘happened all at once’.

‘Suddenly we had several people down on the ground, experiencing some type of cardiac arrest or some type of medical episode,’ Satterwhite said. ‘And so we immediately started doing CPR and moving people right then.’

Satterwhite said promoters quickly agreed to end the event ‘in the interest of public safety’.

Police are currently working to identify the victims and notify their families. Their cause of death has not yet been determined. 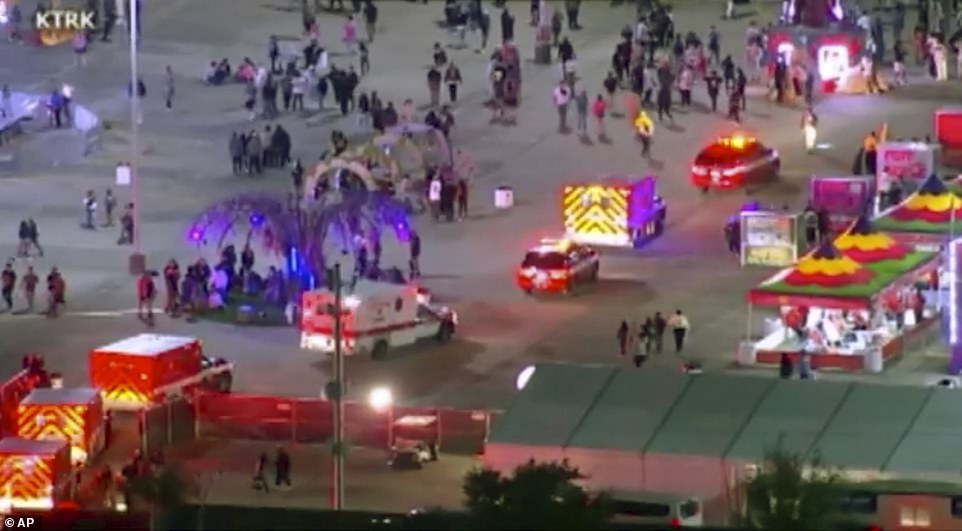 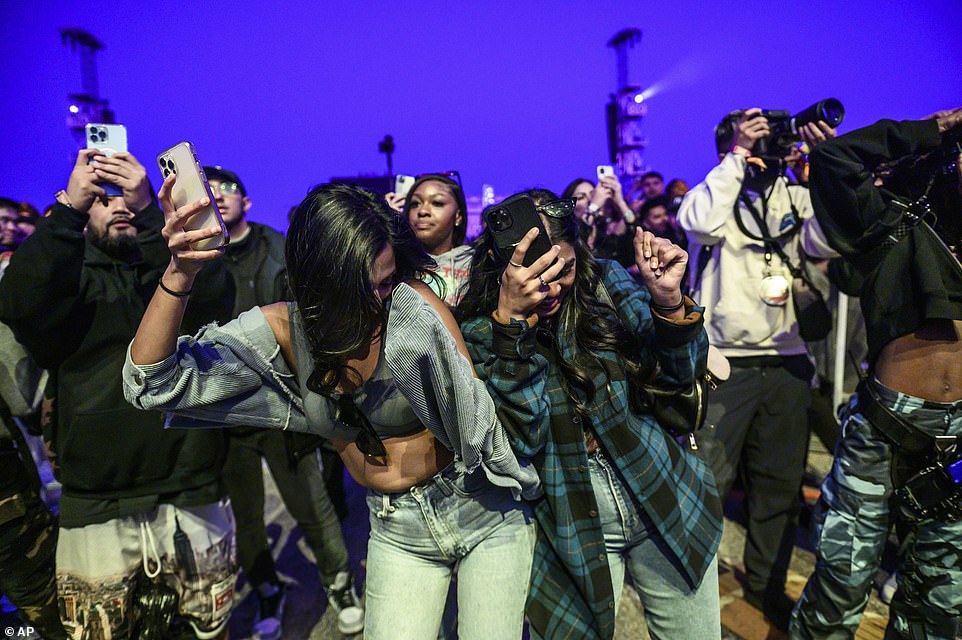 The crowd watches and dances as Travis Scott performs at Astroworld Festival at NRG park on Friday. Houston Police executive assistant Chief Larry Satterwhite, who was near the front of the crowd, said the surge ‘happened all at once’

John Hilgret, 14, of Hunters Creek Village, was the youngest person to die at the concert. His death was confirmed on Saturday by officials at Memorial High School, where he was a freshman student.

Henrdix’s mother, Tracy Faulkner, bought her son’s ticket it for his birthday and ‘ultimately regrets the decision’.

‘Everything about that night was a tragedy,’ Faulkner told the Houston Chronicle. ‘They were both in the same place at the same time and one came home and one we will never see.’

She said Hilgret and Hendrix had known each other for years and played football together.

‘John was a good student and athlete and so polite. He was the sweetest and smartest young man,’ she shared.

The University of Dayton confirmed to DailyMail.com that one of their students was among those killed.

‘Franco Patino, 21, a senior from Naperville, Illinois, was killed Nov. 5, while attending a concert in Houston, Texas. Franco was a mechanical engineering technology major with a minor in human movement biomechanics,’ the university wrote in a statement.

President Eric F. Spina extending his sympathy and prayers to Patino’s loved ones and the campus community.

Patino was involved in several campus extracurriculars and had most recently been working in a co-op program in Mason, Ohio.

His fraternity, Alpha Psi Lambda, also issued condolences to his friends and family.

‘It is with a very heavy heart, Alpha Psi Lambda National, Inc. shares that our brother, Franco “Cuauhocelotl” Patino, has passed on to Omega Chapter,’ the organization wrote on Facebook.

‘We extend our condolences to his family, friends, Alpha Nu Chapter and all that share in this loss. May his memory be eternal.’ 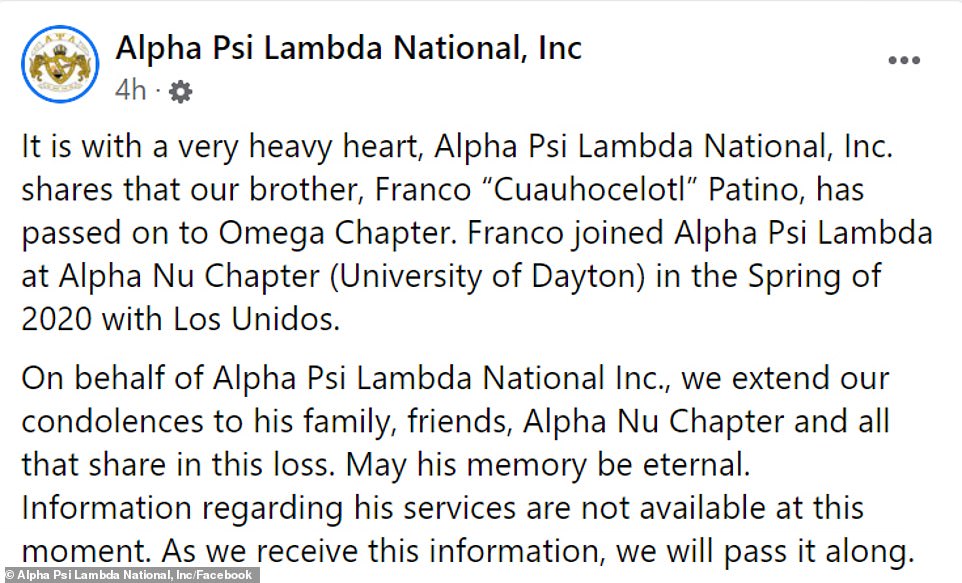 University of Dayton student Franco Patino, 21, was among those killed at the concert

‘My brother was killed in this horrendous event that was managed poorly and supervised by such horrible people,’ Baig wrote.

‘People were trampled, walked, and stomped on. My brother tried to save my sister in law from these horrendous acts that were being done to her in the process he lost his life.’

Baig described Danish as a beautiful soul who put everyone before himself.

‘Last night he showed his courageous act to save my sister-in-law from those horrendous things that were being done. I am lost of words and in true trauma from this event,’ he added.

‘I was there and I wasn’t able to save my brother. People were hitting pushing and shoving and did not care for anyones life.’ 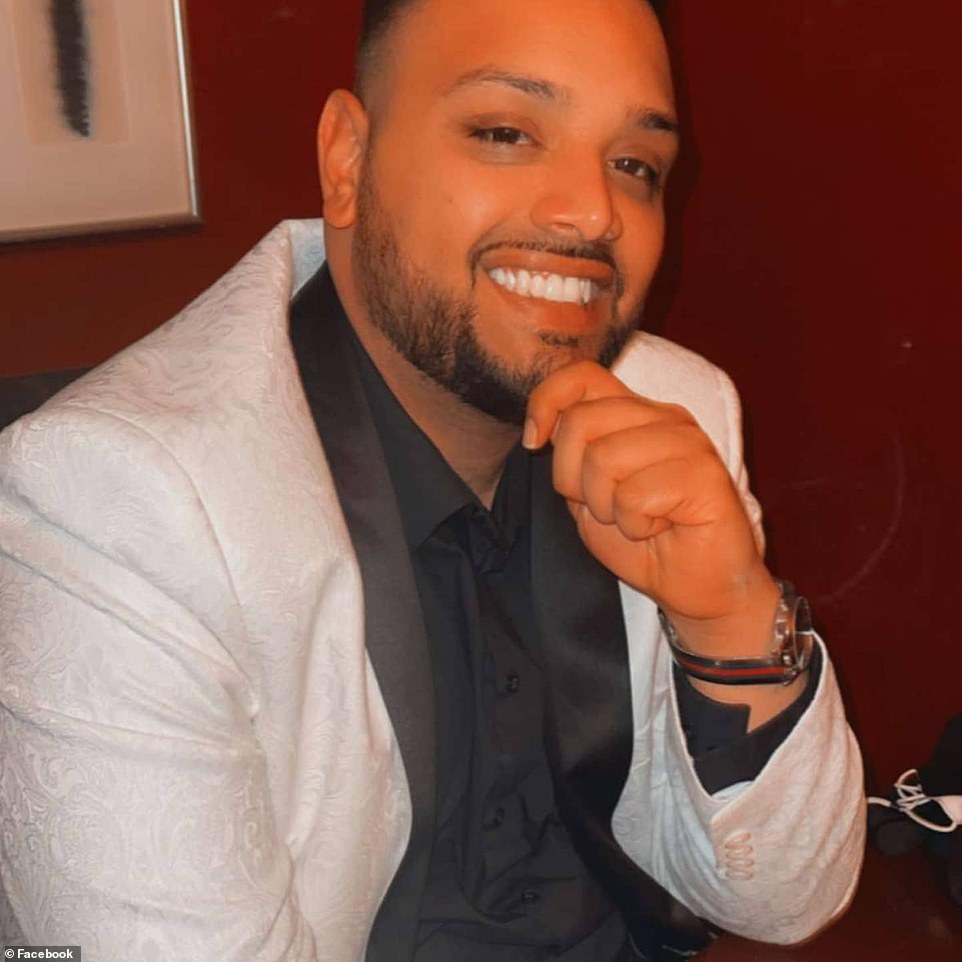 Danish Baig (pictured) has also been identified as one of the deceased. His brother, Basil Baig, accused Travis Scott of provoking the chaos by ‘calling people to the stage to jump into the crowd’ and for ‘not stopping the show’

Baig also accused the rapper of provoking the chaos by ‘calling people to the stage to jump into the crowd’ and for ‘not stopping the show.’

‘This is not the end,’ Baig warned. ‘My family and I will go to the full extent to make sure he is brought to justice.’

In a tweet posted Saturday, Scott said he was ‘absolutely devastated by what took place last night’.

He pledged to work ‘together with the Houston community to heal and support the families in need.’

Meanwhile, a memorial is growing outside of NRG Park.

People placed letters, balloons and bouquets at the gate by the venue.

‘I wanted to set it up, just cause the lives lost,’ Matthew, who set up the makeshift memorial, told KPRC’s Rilwan Balogun. 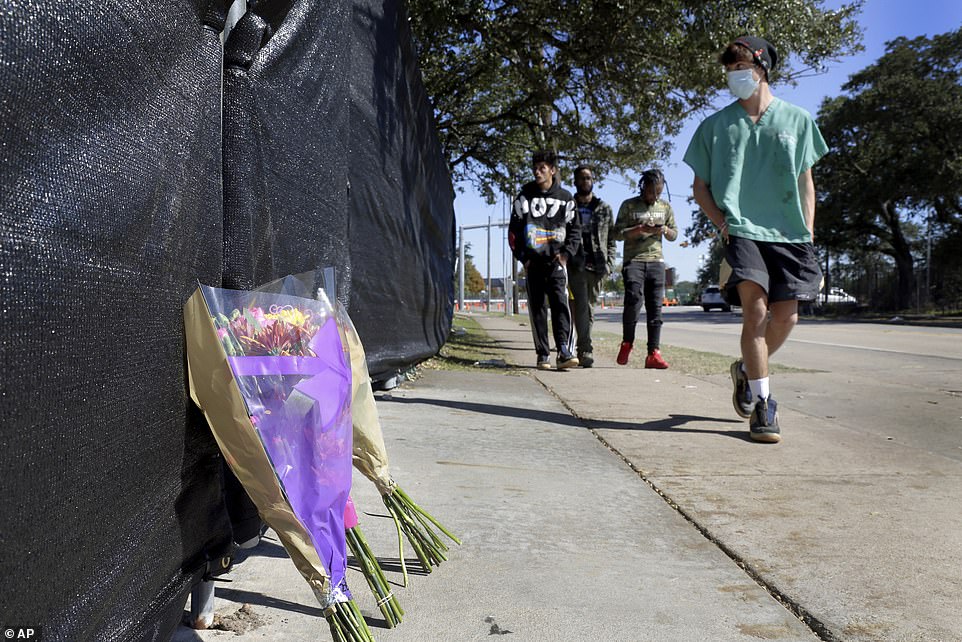 A memorial is growing outside of NRG Park 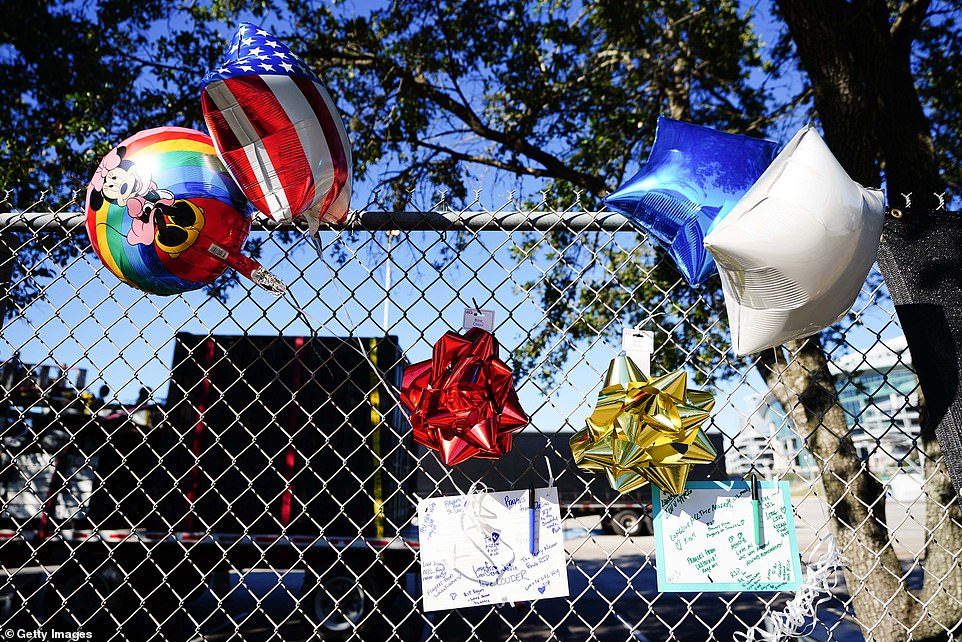 People placed letters, balloons and bouquets at the gate by the venue 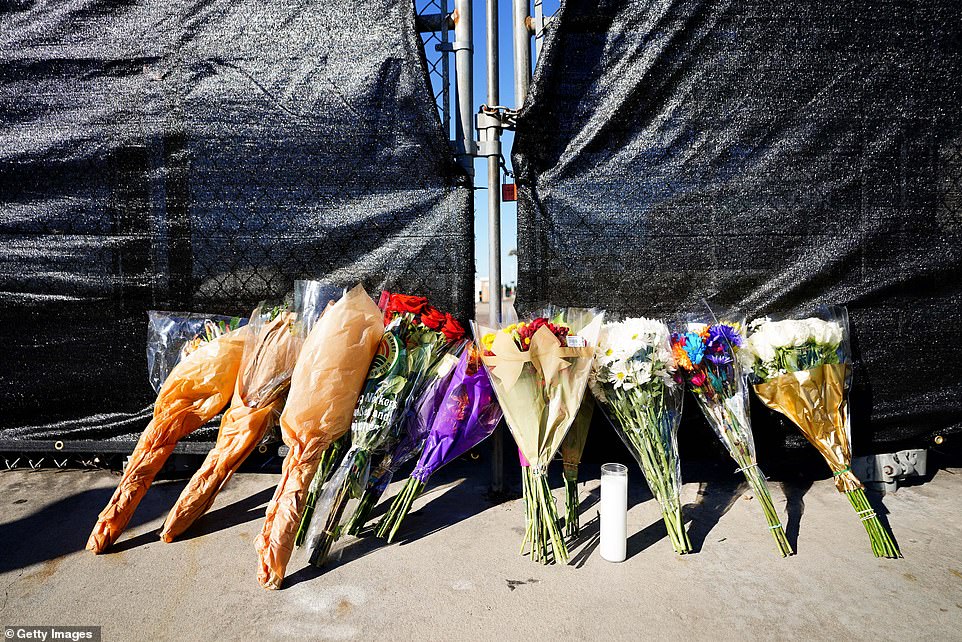 ‘The community right now, from everybody that left #AstroWorld is definitely split, something to bring us together.’

He continued: ‘Even the online community come together just to come over here, to put something down.’

Astroworld organizers canceled the rest of the festival, scheduled to continue on Saturday.

‘Our hearts are with the Astroworld Festival family tonight – especially those we lost and their loved ones,’ they said on the event’s Instagram page. ‘We are focused on supporting local officials’.

Mayor Turner said the investigation remains active with the police department’s homicide and narcotics team, adding that the local government is also speaking with spokespeople from the concert’s producers Live Nation Worldwide and Live Nation Entertainment.

The Future of Libya | RealClearPolitics

Leslie Odom Jr. Embraces His Inner Anti-Hero For ‘The Many Saints of Newark’

Russia says it will suspend ISS cooperation until sanctions are lifted