Welcome to the Army of Russia!

NOT a Russian soldier. A Ukrainian soldier on the front line at Kupyansk. Because Russian Army is not for women. It is for big, tough 65 year-old drunks. September 24, 2022.

On Saturday morning, the news from the front is … pretty much what it was yesterday. At Bakhmut, Russia has launched a series of new attacks from the south, all of which have apparently been repelled. Same as always. At Lyman, there are reports that Russian forces have withdrawn and that Ukraine is preparing a final push into the city. Same as pretty much every day this week. 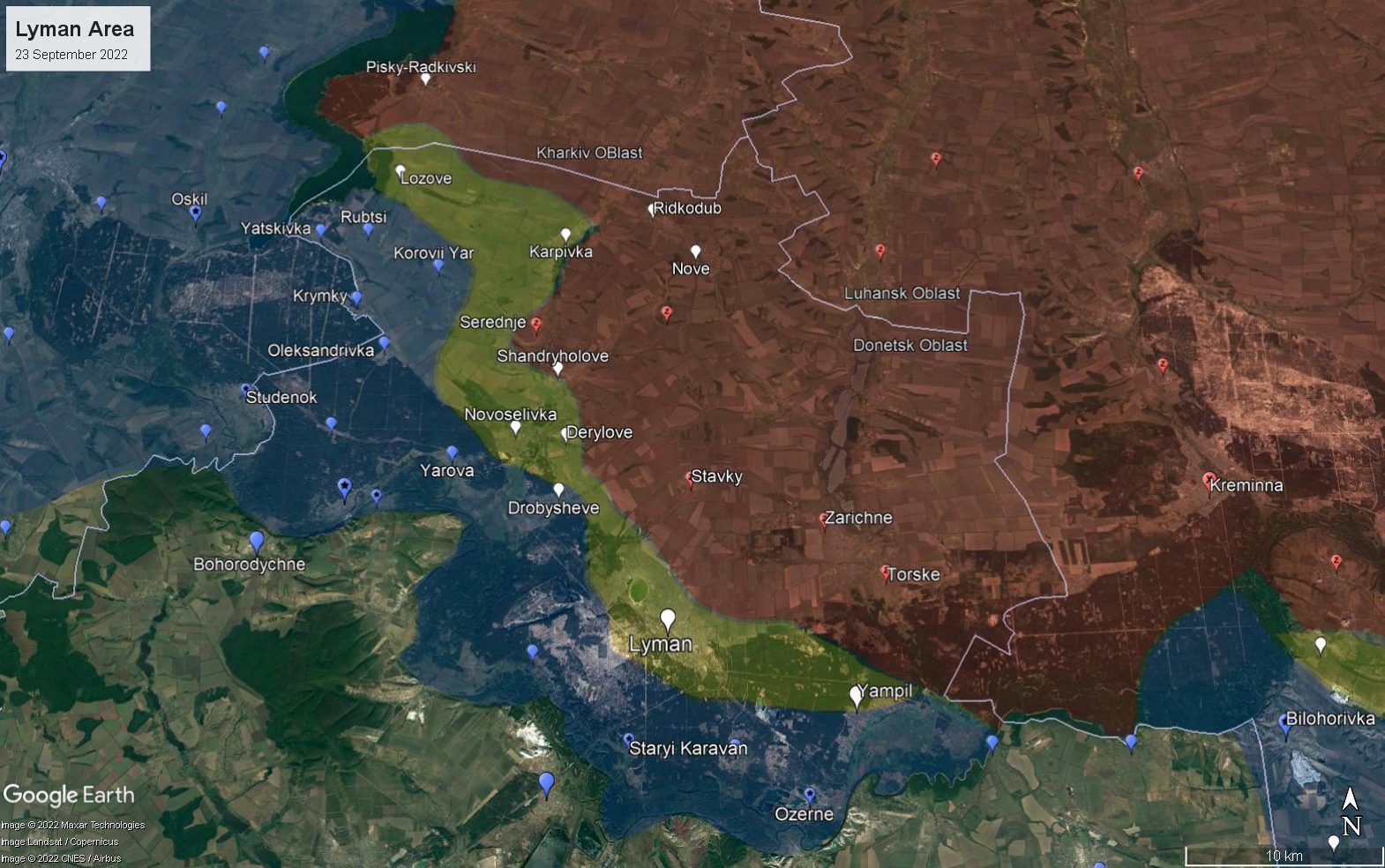 As always, right click on the map and open in another tab to see a larger image.

Just hauling up yesterday’s Lyman map for reference, Russians sources report that they managed to get some air support to slow Ukrainian troops moving toward Ridkodub. So while there are other reports suggesting that Ukraine controls both Ridkodub and Nove (mostly in the form of reports that Russia shelled those locations), I’m not updating for now. There are also reports that Ukrainian forces have entered Novoselivka and control about half that location. Novoselivka is pretty much cut off from the rest of the area by lakes to the east and a steep valley / canyon on the north, so holding this position doesn’t really seem to offer a good chance to maneuver anywhere else.  Russia claimed it got additional force to Drobysheve and helped break out those two mercenary units that had been encircled in the town. In an incident reportedly taking place north of Lozove, Ukrainian forces shot down not one, but two Su-25 jets—possibly the same planes that had been providing ground support at Ridkodub. [Correction: On closer inspection, the plane flying away appears to be a shiny new SU-30SM multirole fighter]

The second SU-25 is able to fly out of the picture with engine that’s very much in the process of consuming itself. I can’t tell from the available shots whether it also crashes or makes it away. In any case, it won’t return soon.

There seems to be ongoing fighting at Derylove, Drobysheve, Novoselivka, Lyman, Serednie, Shandryholove, and north of Lozove. And that’s just what’s getting reported. Which is probably why the number of Russian troops being listed as killed each day has been running upwards of 400.

It’s a lot of fighting. Why Ukrainian forces aren’t able to smash this area they way they did Balakliya and Izyum, I don’t know. I don’t have a good handle on the number of troops fighting here on either side, and some of the folks who are usually good at showing the deployment of units seem just as baffled. Both sides report that the other is getting reinforcements. Russian sources seem convinced that Ukraine is putting in “all the reserves” (spoiler alert: they are not) for a big push at Lyman in the next 48 hours.

If I learn anything more, I’ll pass it along.

Multiple sources are showing that new recruits to the Russian Army can expect beautiful, new equipment.

“I won’t comment anything. Just will say that they gave this allegedly so that our hands remember [how to hold guns]. Still, I’m f****** shocked,” a mobilized Russian soldier says on the video about issued rusty Kalashnikov assault rifles. pic.twitter.com/ztG4bG4PA8

To their choice of five star accommodations.

In any case, you can bet Ukraine is quaking now.

For those companies who didn’t get out of Russia when it was clearly the right thing to do, there is now an extra reward in the form of helping send their employees to die in an illegal war.

Putin’s mobilization also directly affects international businesses which remain working in Russia. They are now obliged by law to assist authorities in drafting their employees. The choice is either to become accomplices in Putin’s barbaric war or immediately pull out of Russia.

Everyone knows better than to mess around with Ents. Ents are badass.

Okay, here’s something of a mini-map update. Open in another tab and be prepared to follow along. 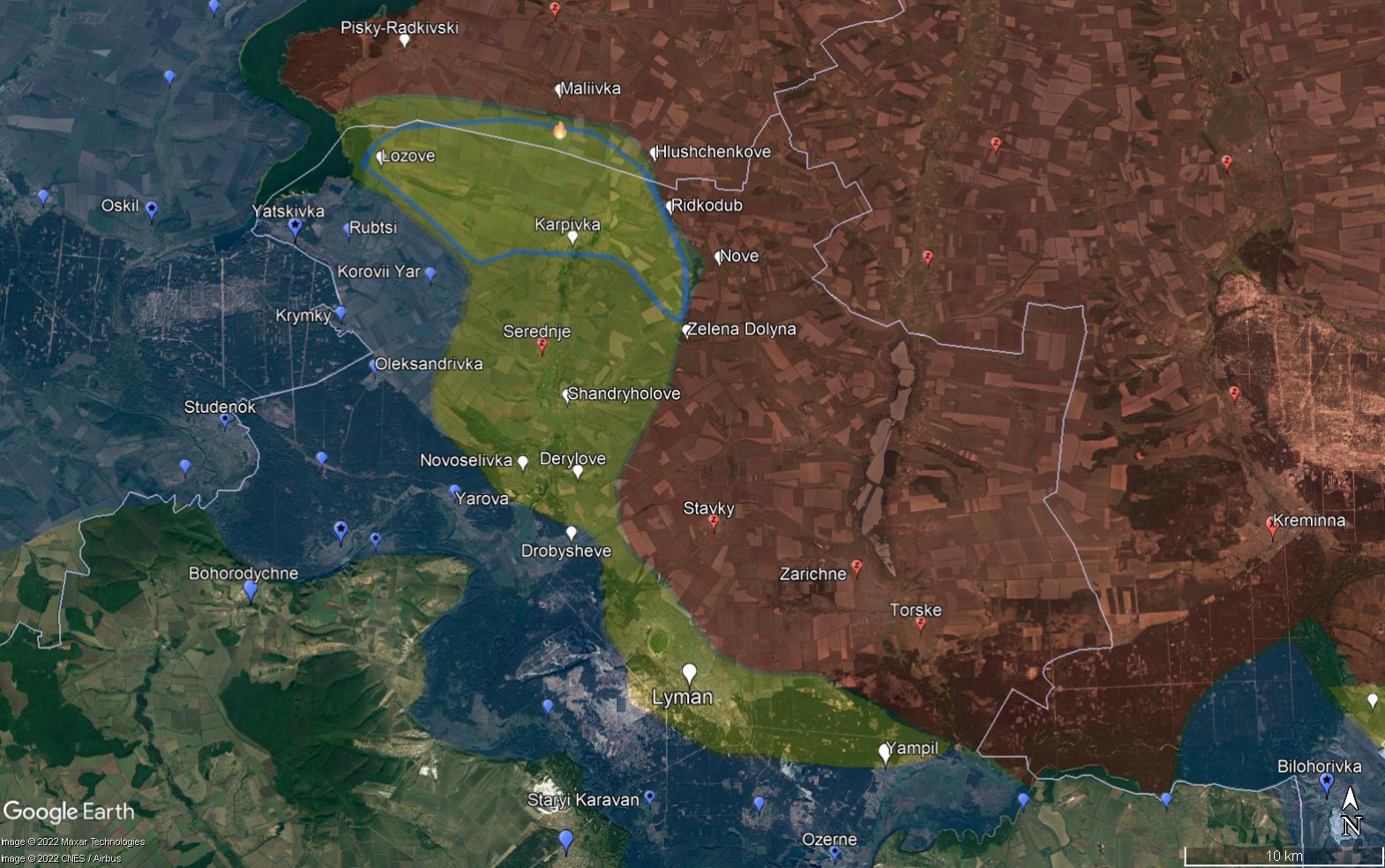 Right click and open in a new tab for larger image.

The big change you can see here is to the area of “in dispute” as well as some new villages and towns lighting up at the edge of this conflict. There are good reports that the fighting has now extended across the Kharkiv / Donetsk border to touch Hlushchenkove and Maliivka. There are geolocated images for both. In particular, that video of Ukrainian forces shooting down a pair of Russian jets took place where that little fire symbol is, about a kilometer south of Maliivka. So yes, those were the same planes that were providing fire support in the area.

At the same time, I have absolutely no reports of fighting at Serednje and nothing new out of Shandryholove.

Consider that little blue outline curving around the top of this area my best guess at what’s actually happening. Ukrainian forces are hooking around the string of lakes and towns in the center of this area rather than advancing straight north from the Lozove — Lyman line. That may turn out to be an illusion, but it fits with the reports of current fighting.

Russian sources once again reported that Russia is making a counterattack from Ridkodub and Nove toward Karpivka. However, there were similar reports yesterday and nothing seems to have come of it. The fights going on in places like Novoselivka may be pretty much behind Ukrainian lines, but the topography there makes it hard to get at the town from more than a few locations, so they are isolated from what’s happening to the north. And if Ukraine’s goal is to get over to Stavky and move down on Lyman from the north, that still seems several moves away.

In Lyman, Ukraine reportedly controls an area both in the southwest corner, and the southeast corner of the city with Russia still holding the center and enforcing it with artillery positioned to the north.

Oh, and as you might expect, Russia is reporting just fabulous turnout for this referendums. Don’t be surprised if by end of day Sunday they announce they have enough votes to call it in all four areas.

In the last hour, there has been decent confirmation that Ukraine has fully liberated Lozove (the Donetsk Lozove, on this map, not the other Lozove that is part of a bridgehead in Kherson). There are also unconfirmed reports that Ukraine has liberated Ridkodub and Nove, with fighting going on to both north and south of those positions. Waiting for confirmation.