It’s an understatement to say that weddings rarely go well in George R.R. Martin’s world, and the Game of Thrones prequel series House of the Dragon is no exception. The first season of House of the Dragon moves much more quickly than Game of Thrones: Five episodes in, and we’ve already covered a half a decade in the lives of King Viserys Targaryen (Paddy Considine) and his backstabbing royal family. And episode 6 will see another time jump, this one taking viewers forward another 10 years.

Alliances are shifting, factions are forming, and animosities are deepening. Book readers, as usual, know where this is all heading. But “We Light the Way” gives its viewers an elegantly constructed recap anyway, to help keep everything straight as we move forward — whether they realize that’s what they’re seeing or not.

One area where House of the Dragon excels is in laying a visual groundwork that clues observant viewers into what’s coming next. Queen Alicent’s (Emily Carey) green dress in this week’s episode is a great example of this visual storytelling, as are the rats slurping up the blood on the dance floor at the end of the episode. (Look up “Blood and Cheese, Dance of the Dragons” if you’re curious.) These hints point toward where the story is going. But episode director Clare Kilner’s most elaborately constructed device reminds us where it’s been, setting up the throne room at King’s Landing, outfitted for a weeklong wedding celebration, to have multiple sight lines, each of them looking down and/or across the room toward the center aisle where the “Dance of the Dragons” is about to take place. 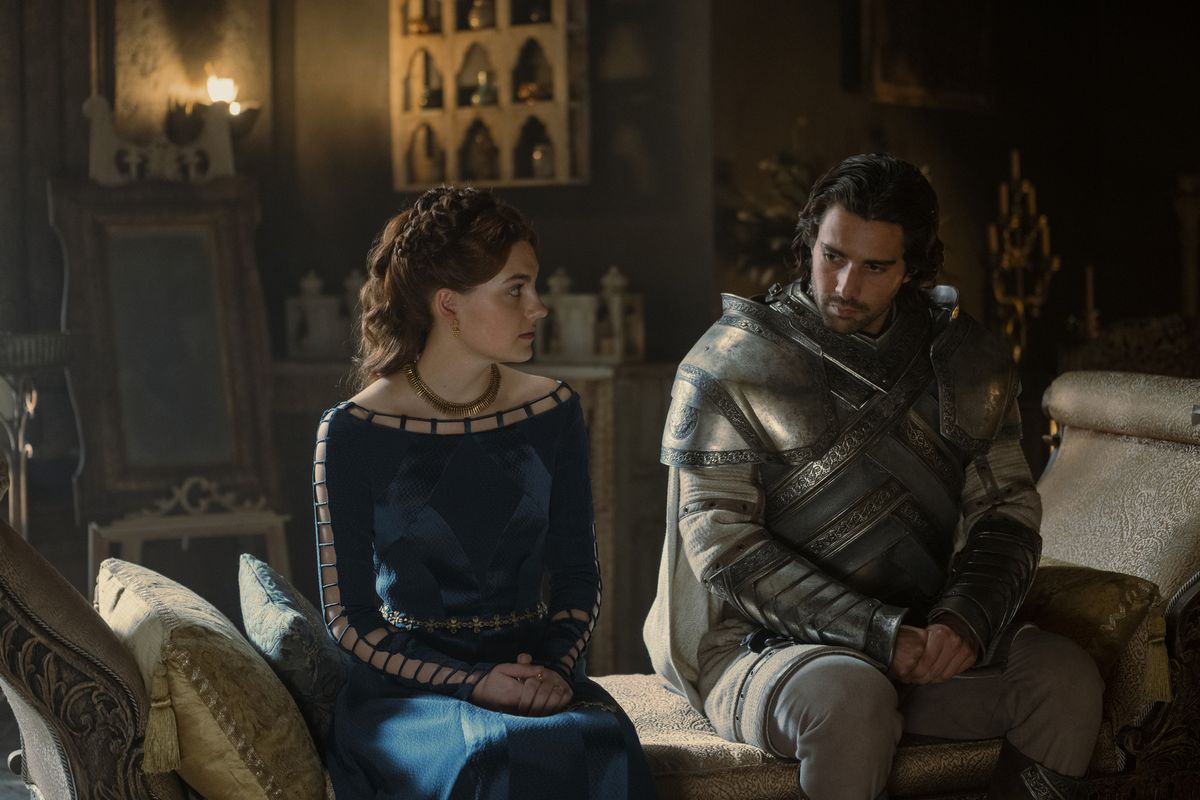 Kilner alternates between these perspectives, cutting between medium shots of different characters — Lord Corlys Velaryon (Steve Toussaint) and Princess Rhaenys Targaryen (Eve Best), the groom’s parents; the bride’s father, King Viserys, and his second wife, Alicent; Prince Daemon Targaryen (Matt Smith), the bride’s uncle and jealous suitor; and the bride’s and groom’s paramours and sworn protectors — who all have a stake in the outcome of this marriage. The happy (or at least content, with an understanding that their marriage is a political arrangement) couple stays at the center of the frame as the assembled lords and ladies get up to join the dance.

Here, Kilner cuts away to Alicent’s uncle, Lord Hobert Hightower, who gets up from his seat to tell a departing Alicent, “Know that Old Town stands with you.” As the dance continues, the camera cuts back again to Rhaenyra’s bodyguard and lover, Ser Criston Cole (Fabien Frankel) — a bit of foreshadowing of his final moments in the episode — then cuts to Ser Gerold Royce of the Vale, who has developed his own reasons for opposing Targaryen rule. More players have joined the dance, both literally and figuratively.

Although, for the time being, these knowing glances and unspoken slights remain within the rarified realm of courtly manners, these tensions will inevitably spin out into bigger conflicts that will mean life and death for thousands of people in Westeros, noble and common alike. The characters understand the importance of such small, symbolic gestures. Alicent walking in late to Rhaenyra’s wedding banquet is not just the end of their friendship; it’s a declaration of war between them. And by blocking and editing this scene to allow for such a close reading of posture, gesture, and sight lines, the show acknowledges their importance as well. 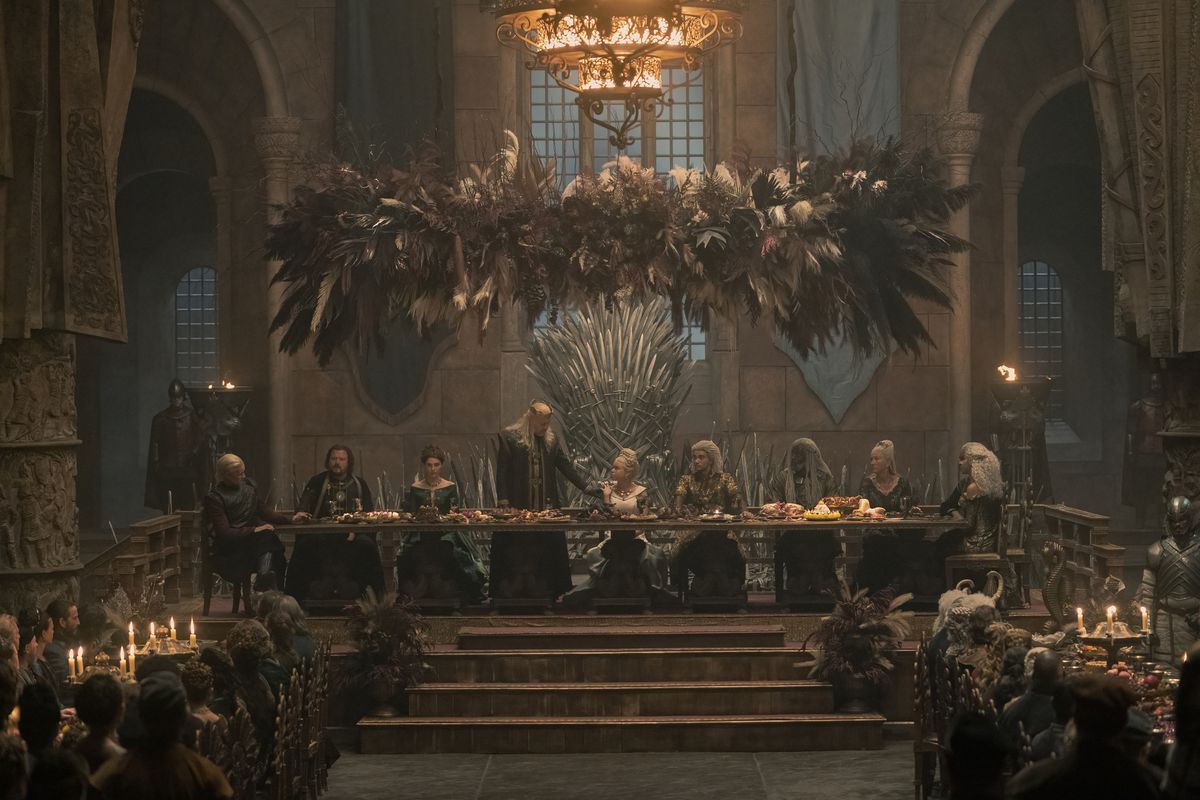 Even Viserys, who generally prefers to ignore the tensions in his court, can’t help but notice the ensuing confrontation between Ser Gerold and his arrogant brother Daemon. But then he looks back out over the dance, concentrating on his daughter at the center of the swirling fabrics and outstretched limbs. This is Viserys’ fatal flaw: He only has eyes for Rhaenyra and his dream of keeping Targaryens on the throne for the next hundred years, failing to see the rats scurrying around the edges of his grand plan. Laenor and his bodyguard/lover, Ser Joffrey Lonmouth, are more observant, however, noticing Ser Criston’s forlorn expression and correctly surmising that he’s the reason why Rhaenyra is content with an “arrangement” with her betrothed. Daemon, who’s used to (and good at) sneaking under his brother’s nose, manages to slip into a spot as his niece’s dance partner as well.

From here, the cutting gets faster and the wide shots of a full dance floor more frequent, and Kilner brings the camera’s focus back on the Targaryens and Velaryons, by now fully distracted by their own internal dramas. We don’t see how the fight on the dance floor begins; all we hear is a scream, which finally draws the royal families’ attention back toward their guests. The view of the action is obscured from the high table — a potent visual metaphor for the Targaryens’ myopia — and Rhaenyra gets shoved aside amid the jockeying of the crowd. The fight is glimpsed in fragments, and we lose track of Rhaenyra and Laenor amidst the chaos.

As soon as the body is dragged away, someone (presumably Viserys) decides that it would be best to get this wedding out of the way as soon as possible, before anyone else dies. The secret ceremony that follows is held amid the scraps of an abandoned feast, decaying and nibbled on by rats. For now, it’s a symbolic loss and a temporary humiliation. But as personal grudges continue to escalate, the “Dance of the Dragons” will transform from a literal dance into a symbolic one: The dance of swords and knights on the battlefield. Game of Thrones, and now House of the Dragon, tend to get a lot of attention and credit for their meticulously planned battle scenes; “We Light the Way” approaches the show’s political aspect with a similar filmmaking sensibility, brilliantly underlining the connection between the two. Today, a ruined party; tomorrow, a ruined house.

Why e-commerce brands are flocking to TV

Violence On Campus Not Tolerated, No Ban On Non-Veg: JNU Adminstration