Modern Games booked his Breeders’ Cup ticket with an impressive victory in the Woodbine Mile in Canada on what was a fruitful Saturday for trainer Charlie Appleby in North America.

Appleby’s runner won the Breeders’ Cup Juvenile Turf last year and added a Classic success to his record this term when winning the Poule d’Essai des Poulains in the spring.

Last seen chasing home Baaeed in the Sussex Stakes in July, Modern Games made a perfect return to action, sitting in the rear in the early stages but making seamless progress once switched to the middle of the course in the straight.

The Dubawi colt powered to the front in a matter of strides, coming home five-and-a-quarter lengths clear of Ivar, with Simon and Ed Crisford’s Finest Sound a further neck back in third in a race that is a Breeders’ Cup Mile qualifier.

Jockey William Buick told www.godolphin.com: “Modern Games was super impressive. He is very good when he gets fast ground and a good pace to run at, as he showed there.

“He was in a great rhythm and we just had to wait for some racing room – he shifted out a little on the apex of the turn but I think the whole field did. He changed gears instantly and, if anything, I ended up in front sooner than I anticipated.

Image:
Modern Games finishes well clear of the rest of the field in the Woodbine Mile


“Modern Games was very good at the Breeders’ Cup last year and he has always been very streetwise. He is very intelligent and adapts very quickly to different situations. He won the French Guineas, didn’t quite stay in the French Derby and was second to Baaeed last time, so he really deserved to get his head in front.”

Appleby and Buick made it a Grade One double with Mysterious Night in the Summer Stakes.

Third in the Vintage Stakes and winner of Deauville Group Three last time out, Mysterious Night showed a decisive change of gear in the mile heat, hitting the front over a furlong out with the minimum of fuss. 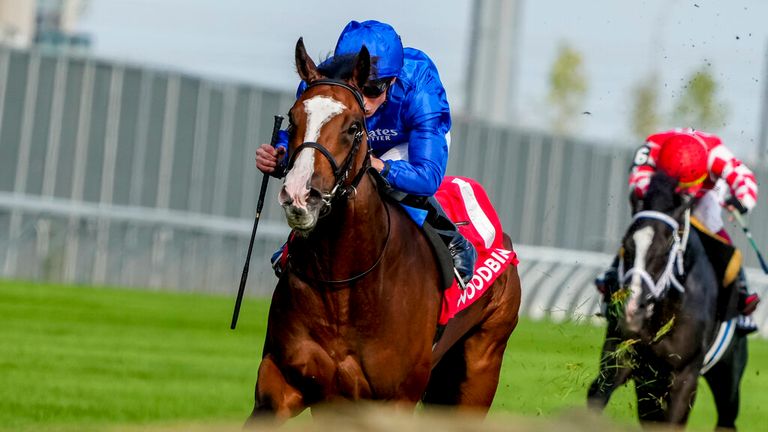 Image:
Mysterious Night was impressive in victory at Woodbine in a Breeders’ Cup qualifier


Buick kept him up to his work in the final furlong, with Mysterious Night coming home almost six lengths clear in another race that offers Breeders’ Cup entry.

The winning rider said: “We knew Mysterious Night was going to like the fast ground and he travelled through the race beautifully. I was quite impressed with the way he picked up. He was giving me plenty of confidence throughout and hopefully he can go on from here.”

Godolphin’s Alex Merriam added: “William was keen to get some cover, so it worked out well when two horses went forward and Mysterious Night slotted in. He switched off and has done it nicely in the end. He is a lovely horse – his sister Althiqa won a couple of Grade Ones in North America and it’s a lovely family.”

Nations Pride also got on the scoresheet for Appleby in America as he won the Jockey Club Derby at Aqueduct. 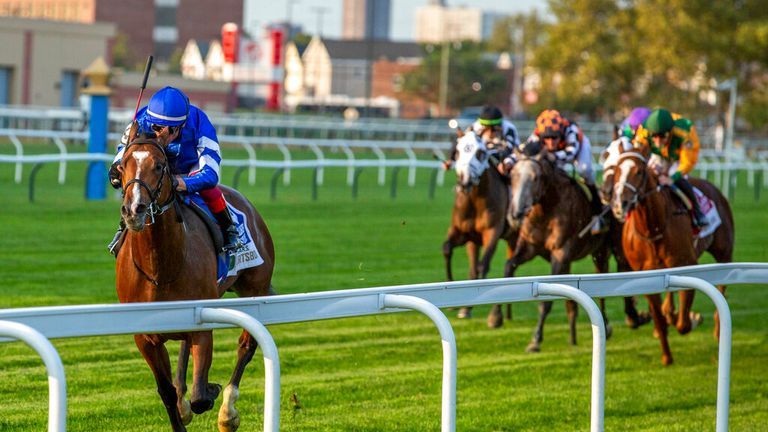 Image:
Nations Pride and Frankie Dettori stretch away from their rivals in the Jockey Club Derby Invitational Stakes


Winner of the Grade One Saratoga Derby last month, Nations Pride dropped back to Grade Three level for this contest and duly obliged in style.

Partnered by Frankie Dettori, Nations Pride grabbed the lead approaching the last of the 12 furlongs and was eased down before the line to win by six-and-a-quarter lengths from The Grey Wizard.

Classic Causeway was third, with Nations Pride reversing Belmont Derby form from July when that horse had him back in second.

Dettori said: “Nations Pride has done very well out here. He has been here for the best part of 10 weeks and won twice as well as finishing second in the Belmont Derby.

“He looks a different horse compared to the one I rode at Belmont. He absolutely flew today and, from the last corner, the result was never in doubt. He has strengthened up and it showed in the result.

“I didn’t want to let Classic Causeway get an easy lead and, when I saw Daunt take him on, I thought ‘great, it saves me having to do the job’. I knew Classic Causeway was going to take me into the stretch and the rest was easy.”

Kayvon Thibodeaux to debut for Giants against Cowboys in MNF showdown

What’s It Like To Be Latin American in Fashion?