Eddie Butler made his debut for Pontypool in 1976

Former Wales rugby union captain and legendary broadcaster and commentator Eddie Butler has died at the age of 65.

After rising to prominence with club side Pontypool, Butler played 16 times for Wales between 1980 and 1984, captaining the side on six occasions and scoring two tries.

The number eight was called up to the British and Irish Lions squad that toured New Zealand in 1983.

After retirement he became a respected rugby broadcaster.

Butler died in his sleep on a charity trek in Peru.

He was a pivotal part of the Pontypool side that was created by Ray Prosser and dominated Welsh club rugby in the late 1970s and early 1980s, captaining the side between 1982 and 1985.

Butler had also played for Cambridge University from 1976-1978 while studying French and Spanish at Fitzwilliam College.

He retired from international rugby in 1985 aged 27 and having worked as a teacher in Cheltenham for three years, Butler then joined Radio Wales as a press and publicity officer in 1984.

While still playing for his beloved Pontypool, Butler went on to work for a property development company. 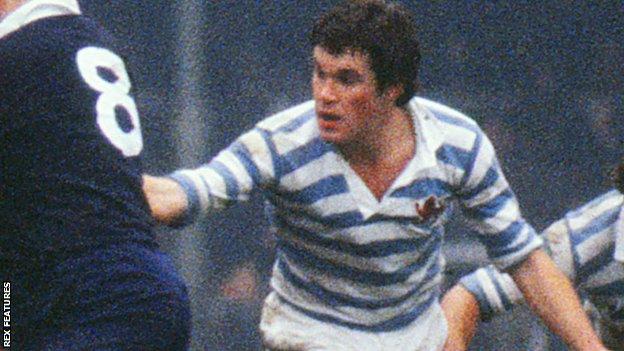 He started his newspaper journalism career with the Sunday Correspondent in 1988 before stints with Observer and the Guardian and returned to BBC Wales in 1990 after being brought back in by new head of sport Gareth Davies.

Current BBC director-general Tim Davie paid tribute to “a wonderful wordsmith” who had shaped so much of the organisation’s output.

“Everyone at the BBC is shocked and saddened by this very sad news,” Davie said. “Eddie was a brilliantly gifted commentator, writer and reporter whose passion for the game of rugby union shone through every broadcast.

“A wonderful wordsmith with a rich, iconic voice, he provided the definitive soundtrack to some of the greatest moments in rugby’s history. He will be much missed by all of us and our thoughts are with his family at this sad time.”

Director BBC Cymru Wales Rhuanedd Richards said: “The world of rugby and broadcasting has lost one of its greats today. A giant in his sport as well as in stature, his knowledge of rugby – the ins and outs, foibles and triumphs – knew no bounds.

“One of Eddie’s greatest talents was his ability to capture and convey the meaning and the emotion of our great sporting moments with authenticity and a brilliant wit that took his audience on a journey.

“He understood his audience, he understood Wales and he understood our passion for the game. Eddie’s voice will be synonymous with so many great sporting memories, and it really is difficult to imagine these future moments in the world of rugby without him.

“I speak for all my colleagues at BBC Wales when I say that we’ll miss him so much. Our hearts go out to his wife Sue and the children at this incredibly sad time and we send them our thoughts and deepest condolences.”

Welsh Rugby Union chairman Rob Butcher said of Butler: “He proudly represented his country as a player, was a mainstay in press boxes around the world long after he retired from the game and has been prolific in the way in which he has served Welsh rugby in both the written and spoken word over decades.

“Our thoughts and prayers go to his family, who we also know well and cherish, and his close friends and colleagues at this incredibly difficult time.

“He was a unique individual and the game in Wales owes him a debt of gratitude for his contributions both on and off the pitch.”

Butler started his commentary career alongside the great Bill McLaren.

After McLaren’s retirement, Butler became the BBC rugby lead commentator where he formed a notable partnership with the likes of former England hooker Brian Moore and ex-Wales fly-half Jonathan Davies.

Butler will be remembered for his brilliant prose that accompanied montages for major sporting and political events, with the final one marking the death of Queen Elizabeth II.

He also commentated on Olympic sports and the Invictus Games, as well as lending his voice to stirring montages for the BBC’s NFL highlights programmes.

Butler presented history series on the BBC including Wales and the History of the World, Hidden Histories, Welsh Towns at War in 2014 and two series of Welsh Towns in 2015.

He was also an author after publishing three novels and two non-fiction books.

Away from rugby and broadcasting, Butler campaigned for Welsh independence in recent years.

His passing prompted tributes and condolences from inside and outside rugby union.

A Slayer playlist is coming to Halo Infinite next week • Eurogamer.net

As Amazon vacuums up iRobot, critics call on regulators to pull the plug on Big Tech deals – GeekWire