The Morrison Formation is a fossil wonderland. Inside these layers of multi-colored sedimentary stone, the remains of Allosaurus, Stegosaurus, Apatosaurus and more have been found through more than a century of fossil hunting. But these Jurassic rocks contain far more than the bones of “terrible lizards” that lived large. Fossils of small creatures have been filling in what the world of the Morrison Formation was really like, including a new fossil reptile with ties to the modern tuatara.

Named Opisthiamimus gregori, the small creature was a bug-hunting reptile that lived in Wyoming roughly 150 million years ago. Despite the animal’s lizard-like appearance, however, it was not a lizard. Instead, it belonged to a different group of reptiles known as rhynchocephalians. Described by Smithsonian National Museum of Natural History paleontologist Matthew Carrano and colleagues today in the Journal of Systematic Paleontology, Opisthiamimus was part of that group that flourished in the time of the dinosaurs but is only represented by the tuatara of New Zealand today.

Finding small creatures in the Morrison Formation is a challenging task, akin to finding a needle in a haystack that extends from Montana to Oklahoma. Large dinosaurs, with their sturdy bones, are easier to find among the gray and maroon outcrops, and that was the first step in a story that would eventually reveal Opisthiamimus.

Decades ago, paleontologists had found an Allosaurus nesting ground at a place called Fox Mesa in Wyoming. To reach the layer of the dinosaur nests, the excavation required removing tons of overlying rock. “In 2010, as we were digging through that,” Carrano recalls, “Pete Kroehler noticed a couple of small bone flecks on the surface of a small block that had come from the layer right about the eggshells.” Kroehler located a few other pieces that fit that curious chunk of stone and marked them to investigate later. Only when preparators at the museum started to remove the surrounding rock did they find that those little bone flecks turned out to be something new.

The rocks revealed one of the most complete small reptiles ever found in the Morrison Formation. “Rhynchocephalians are largely known from fragmentary fossils of their teeth and jaws,” Carrano says. But there was much more to Opisthiamimus. Preparation of the Fox Mesa fossils revealed most of the skull and body of this reptile, a fossil bonanza considering how rarely such small animals were preserved. The assembled bones were enough to know that Opisthiamimus was something very different from other reptiles that lived at the same time. By comparing the reptile’s teeth and jaws to those of other rhynchocephalians found in the same formation, Carrano says, the experts determined that “Opisthiamimus was likely an insectivore with the ability to chew through fairly resistant foods like insect exoskeletons.” 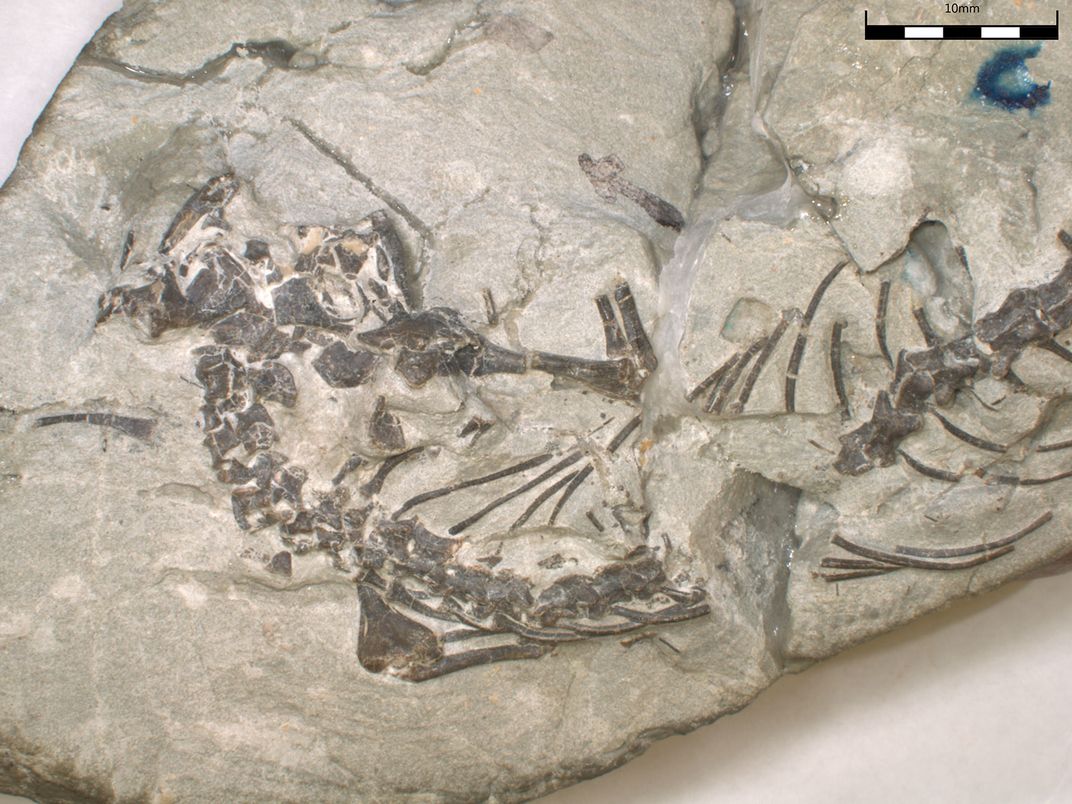 The fossil skeleton of the new lizard-like reptile Opisthiamimus gregori was discovered in the Morrison Formation of the Bighorn Basin, north-central Wyoming, and dates to the Late Jurassic Period, approximately 150 million years ago.

David DeMar for the Smithsonian Institution

The teeth and size of the new reptile line up with the idea that Opisthiamimus was an insectivore says Harvard University paleontologist Tiago Simões, who was not involved in the new study. That doesn’t mean that Opisthiamimus only ate hard-shelled insects, however. “It is always tricky to infer dietary behavior in fossil animals,” Simões says, noting that Opisthiamimus would dine on a variety of small prey items even with its shell-crushing specializations.

The discovery of Opisthiamimus has broader implications than just adding another species to the list of wonderful creatures that roamed North America during the Jurassic. Previously, scientists thought most rhynchocephalians found in the Morrison Formation belonged to a genus called Opisthias. Many fragmentary finds were attributed to that reptile and experts thought that Opisthias was a common, wide-ranging species. But in researching Opisthiamimus, Carrano and colleagues found that many of these older fossil assignments were incorrect. Many different tuatara relatives existed alongside each other during the time the Morrison Formation was being formed. Carrano calls this “a much more interesting picture” which raises questions about how various rhynchocephalian species managed to coexist with each other during the Jurassic.

The new reptile is part of that picture. “I think the name of the taxon says it all,” Simões says, as Opisthiamimus means “Opisthias mimic.” The two were so similar that paleontologists had apparently collected Opisthiamimus fossils even before the Fox Mesa discoveries, only they did not realize that the reptile was something new. Surely other such cases of new species have been miscategorized or gone unnoticed by previous generations of experts. “It makes me wonder how many other important specimens are sitting in museum collections waiting to be described,” Simões says.

Though paleontologists have been sifting through the Morrison Formation for about a century and a half, many new finds remain to be made. That’s especially true for smaller animals that the great “bone rushes” of the past missed. “I think there’s a real focus among paleontologists now toward these undiscovered or even just unheralded animals that were contemporaries with the bigger, more famous dinosaurs,” Carrano says. Such creatures are difficult to locate, often seeming like tiny fragments strewn among larger bones, but they fill in a vision of the ancient floodplains and forests that was previously incomplete. “These animals have often taken a backseat to the dinosaurs,” Carrano says, “which means there’s quite a lot left to discover, study, and understand about them.”

See the striking facial reconstruction of a Paleolithic woman who lived 31,000 years ago

Decarbonising the shipping industry will cost more than $1 trillion

Deep-Sea Octopuses Are Making Shelters Out Of Human Trash

Everything to Know About the Echo on Disney+

The China Initiative, US crackdown on Chinese economic espionage, is a mess. We have the data to show it.