Ukrainian armor on the move in what looks like Kherson front

Instead, let’s do another check in on the Tankies.

For those who haven’t read previous installments, Tankies are people who believe imperialism is bad, and only the United States can be imperialist. Thus, Russia is the aggrieved party here, only attacking Ukraine because NATO something or other. This tweet encapsulates it perfectly:

If you’re on the side of the US empire on any issue you are on the wrong side. Doesn’t mean the other side is always necessarily in the right, it just means a globe-spanning empire that’s held together by lies, murder and tyranny will always be in the wrong. Yes it’s that simple.

Tankies are named after communist sympathizers who witnessed Soviet bloody suppression of the Prague and Hungary uprisings, yet continued to defend the Soviet Union. I’ve written about them here and here, and they’re always good for a quizzical look askance, and then a surprised chuckle when you realize they’re actually serious.

Today we’ll start with Will Schryver, a Utah resident with 27,000 followers on Twitter.

I will simply note that the United States and its willing NATO vassals have deliberately raised the stakes of this conflict such that Russia will very likely now feel compelled to make a momentous decision in deference to the power of perception and narrative.

The empire has played the “ace up its sleeve” in Ukraine.

Over the past several months they methodically constructed a modest strike force of hoarded NATO weaponry and a briefly trained new cadre of Ukrainian soldiers – most of them fresh conscripts.

In addition to these new Ukrainian brigades, they also assembled multiple brigades of NATO troops – “foreign volunteers” – to serve as shock troops for an envisioned “counter-offensive”. The total count of these NATO soldiers is unknown, but is likely at least 3000 – 5000.

I’m persuaded the Russians were clearly cognizant of this build-up. They also clearly provided an irresistibly tempting target for the assembled force, and deliberately created a vacuum into which it would be permitted to advance. What they plan to do next remains to be seen.

“A handful of Ukranians and THOUSANDS OF NATO SOLDIERS took Kharkiv, even though the real number is unknown so I’ll just make up something that sounds good. Oh, and Russia let them, for reasons that even I can’t make up, so give me time to come up with something good!”

This is an ongoing theme—one American Foreign Legion guy took video at Izyum’s entrance, so therefore they’re all NATO. Most of those reports also insist on mentioning that the blacks were also there, likely referring to Malcolm Nance (who has also featured in Russian state propaganda). We know why they need to stress that. 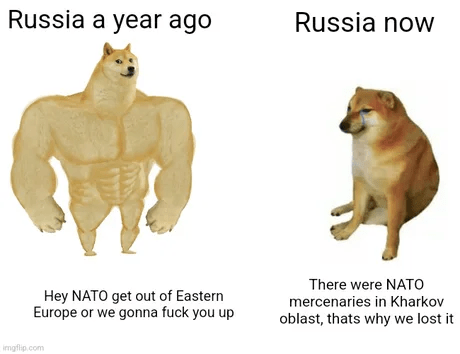 Don’t be fooled by the propaganda saying Ukraine has made huge gains. They have made gains but not major. Russian and Pro-Russian forces control over 120,000(low estimate) sqkm of what is internationally recognized as UA. This week UA gained back control of 2,000 ( 1.6%). Facts

Patrick Lancaster is an American, a Navy vet, who somehow become a chief Putin propagandist embedding with the Russian army.

Now, I guess you can argue that liberating 1 percent of Ukraine’s total landmass isn’t “huge gains,” but Ukraine is a big country. 6,000 square miles is bigger than the state of Connecticut about the size of Delaware, or two Rhode Islands, or half a Connecticut. And really, “they haven’t taken that much” is a pathetic retort when Ukrainian forces are on the march and Russia is struggling to firm up new defensive lines in northeastern Ukraine. And look at that big chunk of red east of liberated Kharkiv: 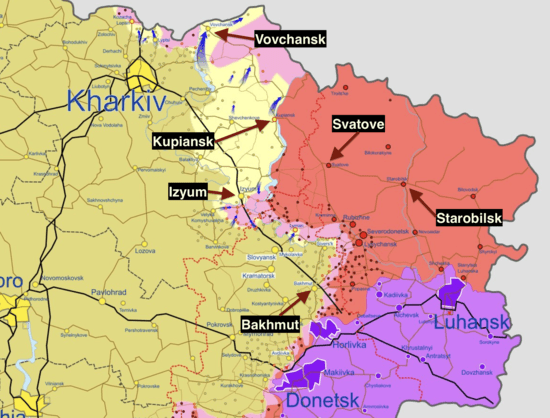 That’s about 20,000 square kilometers of a whole lot of big empty. If Russian positions have been abandoned in Svatove, as rumored, that whole chunk of land will be marked as liberated, and Lancaster will then argue that it’s still not that much because blah blah blah imperialist propaganda.

Capturing Kharkiv is a big deal. 6,000 square kilometers is a lot, but just as importantly, Russia’s northern supply routes into Ukraine have been cut, and Russia just supplied Ukraine with over 300 visually confirmed military vehicles, including 53 tanks and 94 armored infantry vehicles.

Ukraine is only losing men and equipment. Russia always retreats to avoid casualties and after that they just bomb the Ukranian and evil NATO to pieces, retake the lines again and continues the advance.

He had me at “Russian always retreats.” He should’ve quit while he was ahead.

BBC.com quotes you as saying that if support for Ukraine is strong the crisis will be shorter. Hmmm? I guess that might depend on what you mean by “support for Ukraine?” If by “support for Ukraine,” you mean the West continuing to supply arms to the Kiev government’s armies, I fear you may be tragically mistaken. Throwing fuel, in the form of armaments, into a firefight, has never worked to shorten a war in the past, and it won’t work now, particularly because, in this case, most of the fuel is (a) being thrown into the fire from Washington DC, which is at a relatively safe distance from the conflagration, and (b) because the “fuel throwers” have already declared an interest in the war going on for as long as possible.

Zelenska curtly replied that he had sent the letter to the wrong president.

Ukraine is playing chess like the west, terribly. Russians are masters at chess playing. This is a trap & will only cause Ukraine to lose more soldiers before Russia comes back in, fresh with minimal losses & that’s the military reality, not what western media or NATO bots claim. https://t.co/YaSLfH405h

In their post-counteroffensive triumphalism, US hawks reveal real objectives of the Ukraine proxy war.
“A victory in Ukraine’s understanding of the term also brings about the end of Putin’s regime,” Anne Applebaum wrote, urging Russia’s destabilization. https://t.co/GC96Xxgp9P

Yeah, Max Blumenthal thinks this is a GOTCHA moment—“AHA! See? They want Putin to fail!” So, guys? Plot twist! You are all now “US hawks” because we want to see an end to a murderous, expansionist regime.

Pundits are touting #Ukranian rout of the #Russians lately. I’m not buying it.Just seems too easy. I am betting the Russians pulled back to let the Ukranians fill the void. The trap is about to be sprung, watch for the big Russian artillery offensive.

Whitmore is a MAGA conservative with 42,000 followers on Twitter. And what better example of their modus operandi? “I don’t like what I see so I chose to reject it without any evidence. Instead, I will create an alternate reality that better comports to my biases and prejudices.”

Obviously, this is a trap by the Russian. They willingly “surrender” as POW to be taken behind enemies line. Once there, they will break out and take over un opposed. The Ukrainian fell for it and will hasten their defeat.

The ol’ “mass surrender so we can rise up from the rear” ploy that has worked so well in about zero past wars.

If we were being told the truth about this war they wouldn’t be banning Russian media, we wouldn’t be hearing propagandistic messaging like “unprovoked invasion” at every mention of Ukraine, and those expressing scrutiny of all this wouldn’t be swarmed by astroturf empire trolls.

She’s talking about RT losing its broadcasting license in some European countries. Keep in mind it can still stream and publish online. Europe isn’t Russia, where all dissenting media has been shut, and myriad journalists imprisoned, along with the opposition party. Also where legislators that express opposition to Putin’s war are arrested and fined and threatened with seven-year prison terms. 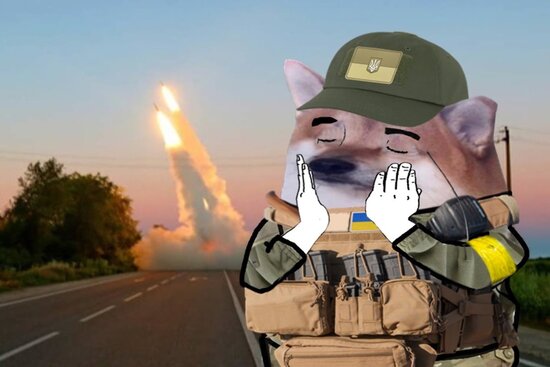 The North Atlantic Fellows Organization has certainly done a great job getting under the skin of Tankies and Russians.

The Ukrainians appreciate the meme warriors.

Zelensky advisor Mykhailo Podolyak on the information war between Russia and Ukraine:

“Russia has archaic bot farms and trolls army. We have NAFO and Reddit. Truth always wins”

He believed wrong. So how it’s going:

The mysterious case of the missing Russian army. Only Donbas militia and Wagner fighting, an eerie silence from the Kremlin. This is the calm before the storm. Season two of the Special Military Operation will begin soon.

It’s probably because Super Invisible Secret Army is about to be deployed! 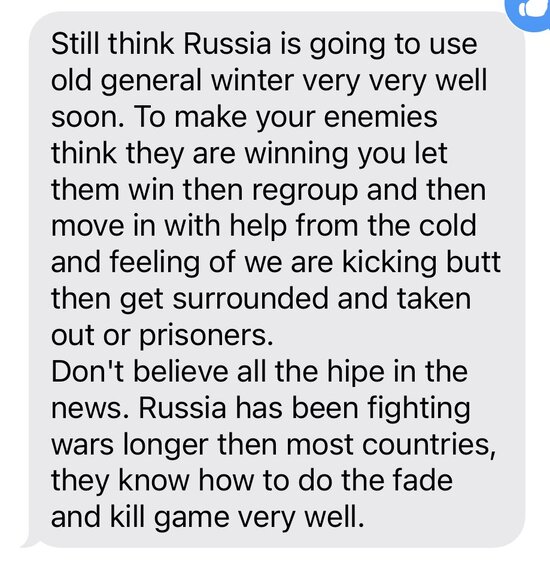 This will be a classic Tankie cope for the ages:

Russia won’t lose in Ukraine, because it CAN’T lose the war in Ukraine.

If there are truly NATO strategists who are foolish enough to bet on Putin’s retreat, then I fear for the world.

If you clap loud enough…

This one is a thing someone (a Russian university professor) seriously wrote.

Whether you like Putin’s Russia or not, it must be admitted the country has come a long way from Stalin to Putin. Stalin didn’t care about casualties among his troops. Putin does. Minimization of human losses is the priority.

And this is a fitting conclusion to this update:

From their bridgehead in Kherson, 🇺🇦 attacked Northeast towards Davydiv Brid and to the West potentially capturing the settlements of Novohrednjeve and Mala Seidemynukha.

Ternovi Pody is contested again after recently being recaptured by 🇺🇦. pic.twitter.com/abvlM58yBa

The local women come out to thank them, and after some confusion say “please make sure to stay alive so you can later return home and your mothers won’t cry”.