The best and worst moments of Emmys 2022

The 2022 Emmys ended up being a middle-of-the-road show — nothing terribly controversial happened (no, nobody slapped anyone). But it also moved along at a brisk pace and included enough moving and funny moments that it wasn’t a bad show, either.

Host Kenan Thompson played it safe, and did a solid job shepherding things along while injecting a few laughs, but nothing too distracting. It was a big night for “Ted Lasso,” freshman ABC comedy “Abbott Elementary” as well as HBO’s “The White Lotus” and “Succession.”

Although it was a staid night, there was room for genuine emotion, such as Lizzo giving a speech in which she said, “When I was a little girl, all I wanted to see was me in the media. Someone fat like me, Black like me, beautiful like me,” which got a big applause.

Lizzo gives her speech during her win for outstanding competition program for “Lizzo’s Watch Out for the Big Grrrls.” AFP via Getty Images

And Sheryl Lee Ralph, who cried and burst into song when she won for “Abbott Elementary,” garnering a standing ovation. (She also made history as the second Black woman to ever win that category). And, there were a few amusing moments, such as Jean Smart saying during her speech (for her “Hacks” win), “And I lost a bet, so thank you for the botox.”

Here’s a look at the best and worst moments of the night. 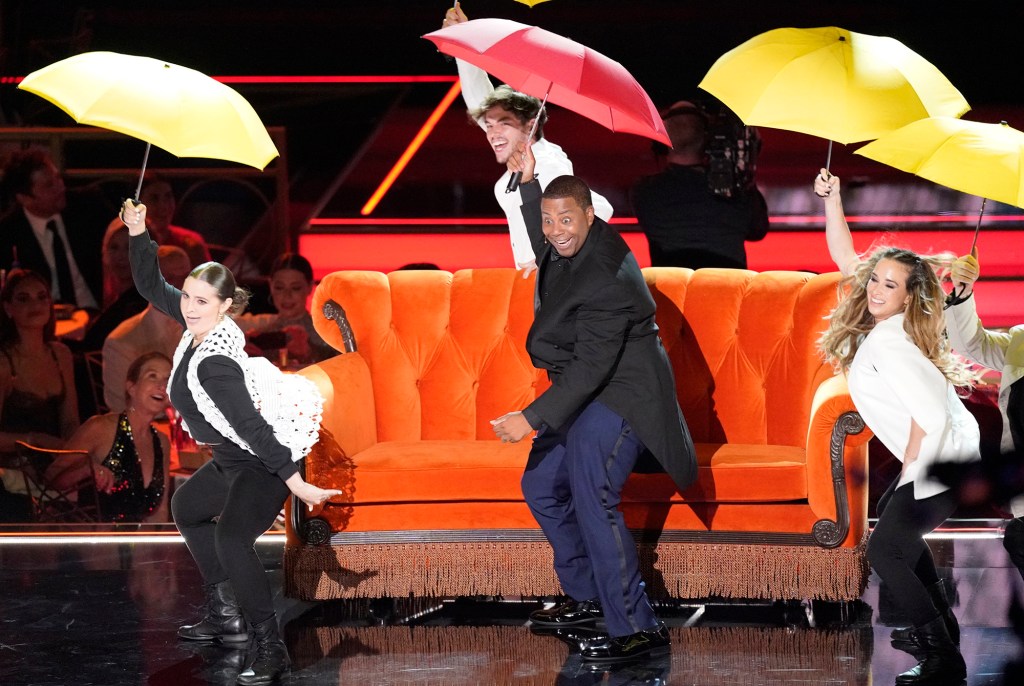 Rather than spending his monologue roasting celebs in the room, or feeling the need to prove how clever he was, “SNL” vet Kenan Thompson opted to make some gentle jokes about TV before transitioning into some eye-catching dance numbers based on hit TV theme songs of the past such as “Friends,” “The Brady Bunch,” “Game of Thrones” and “Stranger Things.”

It wasn’t exactly a scintillating monologue filled with memorable zingers apart from a dig on Leonardo DiCaprio, but Thompson’s safe choice didn’t overstay its welcome, and it set the tone for an energetic night that keeps the focus on TV. 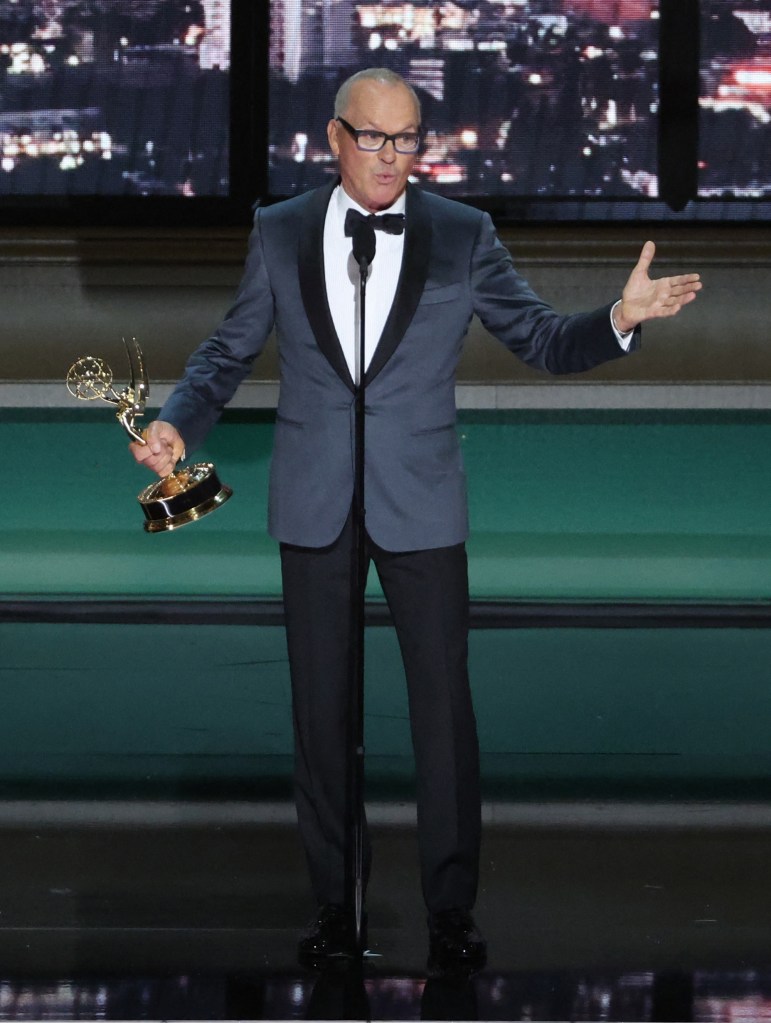 Michael Keaton delivers his speech for his “Dopestick” win. REUTERS

Michael Keaton, 71, has been around in Hollywood for a long time — but this was his first Emmy win (for Outstanding Lead Actor in a Limited or Anthology Series or Movie, for  “Dopesick”) and he gave a very wholesome speech about how he was enthralled by television growing up, and his family supported him and never made him feel foolish, even though they “weren’t exactly patrons of the arts.”

He also added, “Over the years, we’ve all been through tough times. I’ve had some doubters. You know what? We’re cool,” which got a big applause from the room. 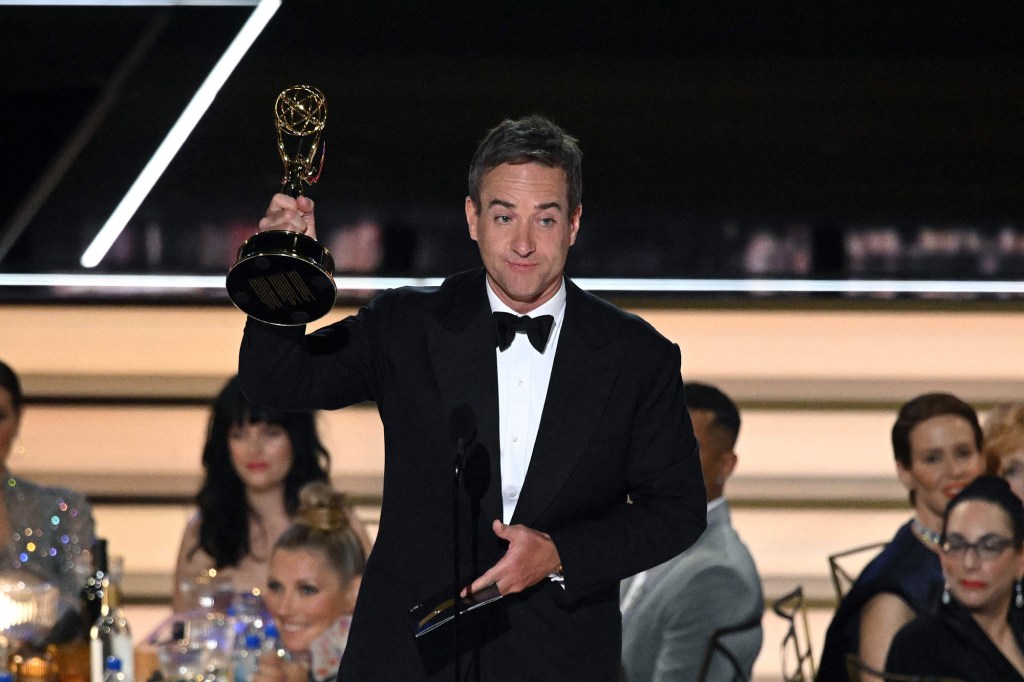 Matthew Macfadyen giving his speech for his “Succession” win. AFP via Getty Images 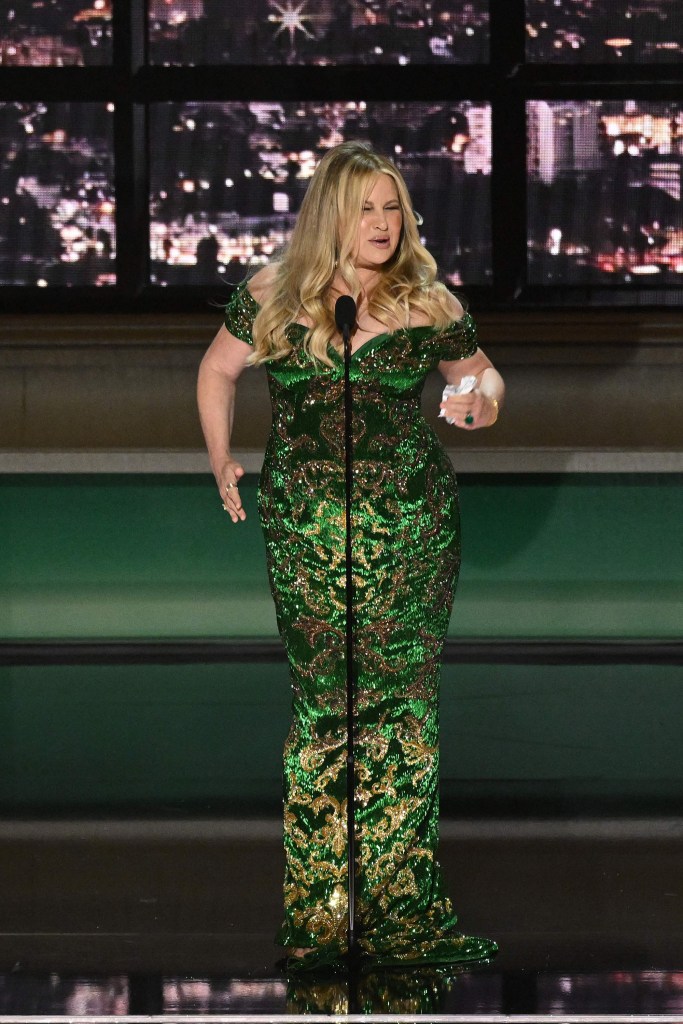 Jennifer Coolidge dancing as the play-off music begins during her Emmy win for “The White Lotus.” AFP via Getty Images

Worst: Too many big stars getting play-off music too soon

When he took home the trophy for Outstanding Supporting Actor in a Drama Series for “Succession,” it felt like Matthew MacFadyen barely got to open his mouth to deliver his speech before the music played him off — which was odd, since Michael Keaton got to tell a fairly lengthy anecdote during his win. But, at least MacFadyen had a few seconds to slip in a reference to his character Tom Wambsgans as a “bonkers gift of a role.”

Similarly, when Jennifer Coolidge won (for Outstanding Supporting Actress in a Limited or Anthology Series or Movie for “The White Lotus,”) the music started playing her off before she could get out more than a brief amusing anecdote about taking a lavender bath that made her “swell up” in her dress. Visibly distressed and flustered, she protested, “Wait, this is a once-in-a-lifetime thing!” and proceeded to thank people, doggedly talking over the music. She then started dancing to it, shimmying at the microphone, using the play-off music in her favor, which got huge applause and laughs. 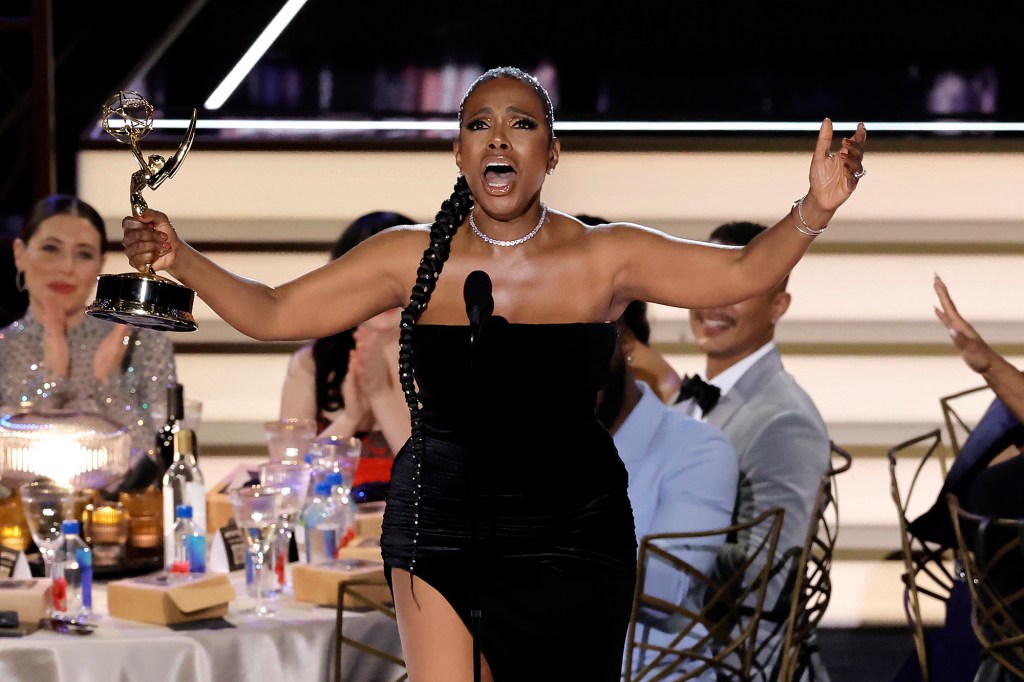 A visibly emotional Ralph burst into tears when she was announced as the winner of Outstanding Supporting Actress in a Comedy Series for freshman comedy “Abbott Elementary.” Onstage when she went to give her speech, she belted out the song “Endangered Species” by Dianne Reeves, treating everyone to a performance that got a standing ovation from the room.

After, she delivered a short speech where she said, still almost singing, “To anyone who has had a dream and thought it couldn’t come true, I am here to tell you this is what believing looks like.”

“Give Sheryl Lee Ralph a Tony for her Emmy acceptance speech, please and thank you,” one viewer tweeted. She also makes history as the second ever Black woman to win this category (Jackee Harry was the first, for NBC’s “227” in 1987).

Best: Reference to the Oscars slap

The Will Smith and Chris Rock Oscars slap heard around the world was the most dramatic moment to happen at an awards show in decades. It’s hard to tune into the Emmys without wondering if something like that could happen — and when “SNL” cast member Bowen Yang came out, he and Thompson cleverly joked about it without mentioning it in so many words.

Yang claimed he is the “backup host” in case something goes wrong, to which Kenan replied, “What could possibly go wrong?” Yang explained, “Did you see the Oscars? So many things could go wrong …” Thompson said, “Is that a threat? Because if it is, it’s a hate crime,” and Bowen finished, “Not if I do it, because then it’s representation.”

With that joke, they covered a lot of the discourse surrounding the Oscars slap (and the racial undertones of a lot of the surrounding conversation). But, by not spelling it out, they also neatly danced around a topic that everyone is tired of hearing about. So, they got to have their cake and eat it too, winking at the audience about the slap, without making a tedious number of jokes about it. 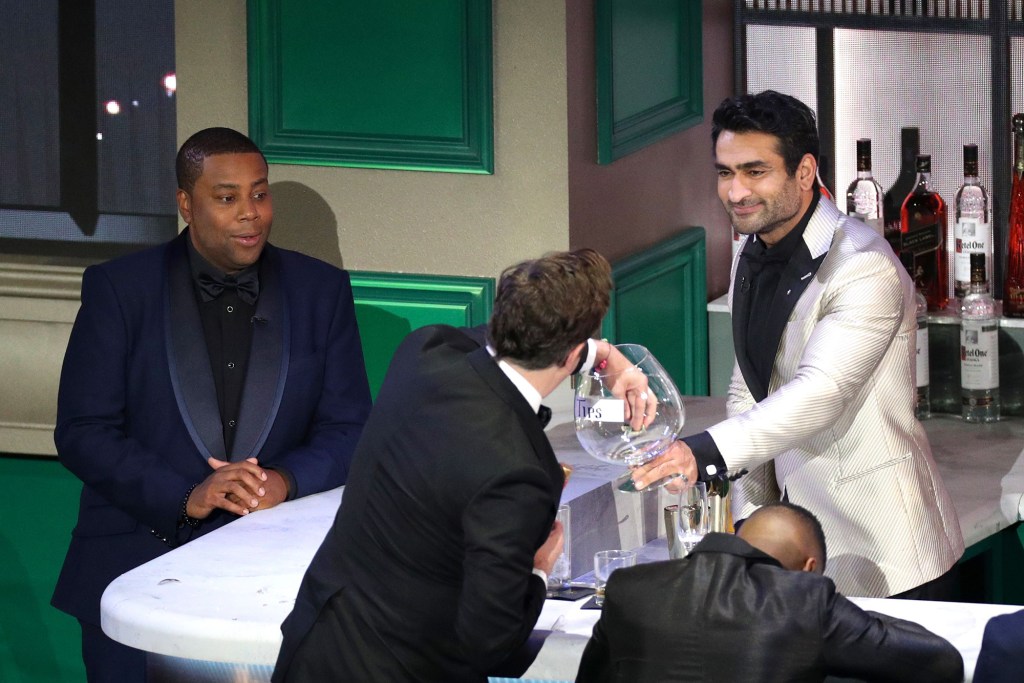 In the middle of the ceremony, Kumail Nanjiani joined Thompson for an unfunny bit in which Nanjiani was acting as the bartender and failing miserably.

“Someone ordered a martini, extra dirty, and I spat in it, is that right?” he asked. Jason Sudeikis also briefly joined, but didn’t do anything funny – it was more like the visual equivalent of a name drop, just to show us someone funny was present.

There’s nothing wrong with Nanjiani or Sudeikis, but it was the type of pointless, time-wasting bit that plagues awards shows. And it stuck out since this one was otherwise relatively free of them.

But, it wasn’t all bad — the bit ended with a cute “Kenan & Kel” reunion, as Kel Mitchell came up to the bar to order a “good burger” as a throwback to their ’90s Nickelodeon show, where Thompson got his start, and the two men hugged. 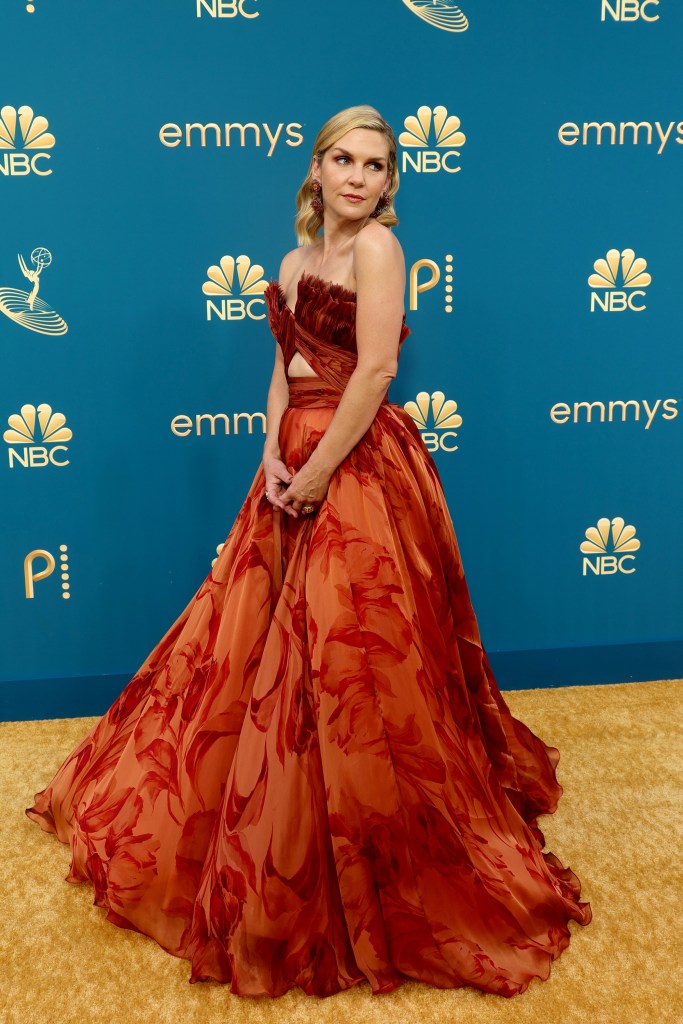 Worst: Snubs for some excellent shows

Three of the year’s best dramas – “Better Call Saul,” “Severance” and “Yellowjackets” – were all egregiously snubbed. In one of the categories they were all up for — Outstanding Writing in a Drama Series — “Succession” won instead (and it also won for Outstanding Drama Series). In the acting category, Zendaya won for “Euphoria” over Melanie Lynskey for “Yellowjackets.”

It’s not that “Succession” or Zendaya are undeserving, but “Succession” is starting to dominate in a way that’s getting boring, while “Euphoria” is a show that has questionable writing and allegations of a “toxic” work environment. “Better Call Saul” went home empty-handed after a stellar final season, so that series still has no wins to show for the 46 nominations it racked up during its run.

The Best Sex Blanket Is a Blanket Literally Made for Sex

Email woes gotcha worried? How to fix problems and fend off attacks

62 best Star Wars gifts for 2022: Find the perfect thing for the Rebel in your life