The MTV Video Music Awards have had its fair share of shocking moments throughout the years, but something about 2022’s New Jersey-set edition felt, well, a bit cursed. Or at least like glitches in the matrix. We guess that’s what happens when you make the very odd choice of starting the show with Johnny Depp rambling on about his willingness to take money to attend a wake. Shocking, but not in that iconic “Britney just kissed Madonna” way we expect out of the VMAs.

Maybe it was all due to the fact that the VMAs were competing against the second episode of Game of Thrones prequel House of the Dragon. Producers said, “Oh, we heard you all like watching that twisted stuff that leaves you feeling a little queasy afterwards. Don’t worry, we can do that too.” Here, a roundup of the strangest moments from this year’s show.

Even if Deep wasn’t just involved in a controversial, highly disturbing legal battle involving domestic abuse allegations, the decision to open the show with a pre-recorded clip of Depp as a sleep paralysis demon in a space suit would have been upsetting. He appeared again later joking that he does birthday parties and funerals as well. No one who works at MTV thought this was a good idea? Wait, does anyone work at MTV anymore?

Gen Z loves to razz millennials over their more embarrassing tendencies, but they will have to answer for Yung Gravy. The rapper, who looks like if Andrew Garfield was doing an SNL sketch about the BeeGees, currently has a TikTok hit with a song that samples Rick Astley’s “Never Gonna Give You Up,” which he played during the pre-show. Though, perhaps more talked about than his music was his date. He brought Sheri Easterling, who he called “queen of the milfs” on live television. Who is Sheri? Well, she’s the 42-year-old newly single mother of none other than Mr. Gravy’s fellow TikTokker (and famous Kourtney Kardashian friend) Addison Rae.

Jimmy Fallon Dressing Like He Just Got Back From Dimes Square 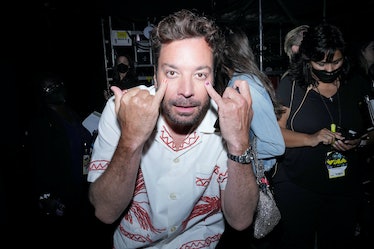 The normally buttoned-up late night host showed up at the ceremony unshaven, nails painted, hair uncombed in a Bode-knockoff (we guess he’s still on the waiting list for the J. Crew giant khakis). It was all a little “hello fellow teens” complete with painted cool-dad pinky nails. 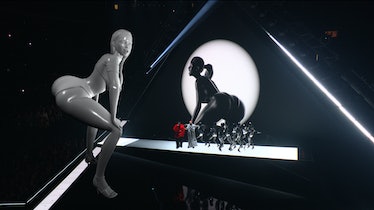 Nightclub dancers, your jobs will not be threatened by technology. The giant holographic pairs of buns Balvin summoned during his performance with Ryan Castro robotically gyrating were decidedly unsexy if not a bit unsettling.

Eminem and Snoop Joined Bored Apes in the Metaverse 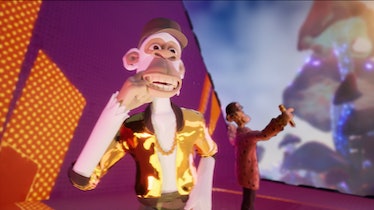 Enough. Those apes aren’t the only thing getting bored. 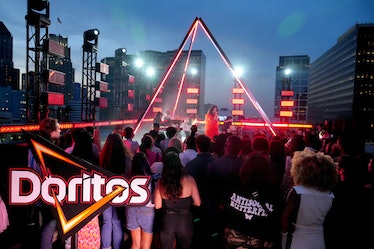 Don’t get us wrong. We’re fans of some of the up-and-coming artists that performed on the Doritos stage, but the endless pushing of the chip’s “Triangle Tracker” made this product placement feel all the more heavy handed.