‘They’re probably going to put us back in power’: GOP basks in Dem discord

And the handful of GOP centrists who are trying to stitch together a dozen or so votes for the Senate’s bipartisan infrastructure bill, once it finally gets to the floor, are getting no help from Democratic leaders who — despite periodic attempts to decouple them — have kept the $500 billion roads-and-rails measure harnessed to a separate social spending framework. With the infrastructure bill remaining a de facto legislative hostage to Democrats’ more progressive social policy plan, Republican moderates are finding it harder and harder to boost their numbers for it.

Putting the War in Ukraine in Context

The result is a GOP conference mostly avoiding the spotlight these days, getting fewer tough questions about Donald Trump’s enduring hold on the party or about the handful of House conservatives with a penchant for extremist and divisive rhetoric. While Democratic infighting blots out the sun in Washington, Republicans don’t mind the shade.

“The general thought was the Democrats are good at government and they’re showing they’re not,” said Rep. Patrick McHenry (R-N.C.), his party’s top member on the House Financial Services Committee. “The most helpful thing is that they’re not doing the other pieces of legislation. … Most of the committees have sort of slowed down their legislative production because they’re all watching the big game.”

Still, it isn’t a champagne-showers sort of celebration for Republicans, who say it’s only a matter of time before the next legislative battle comes around.

“I don’t think Republicans are gonna be out celebrating, because we know they’re gonna do something bad eventually. It’s just a matter of time,” said Rep. Dan Crenshaw (R-Texas). “It’s just, the longer we can stave off bad policy, the better.”

As Democrats labor to secure an agreement on their climate and health care-focused party-line bill after months of negotiating, Biden’s approval ratings are falling and the GOP is growing more bullish about its already-strong midterm election prospects. In recent days, House Minority Whip Steve Scalise (R-La.) privately compared his opponents’ predicament to the Bill Murray comedy “Groundhog Day,” about a man forced to relive the same experiences over and over. 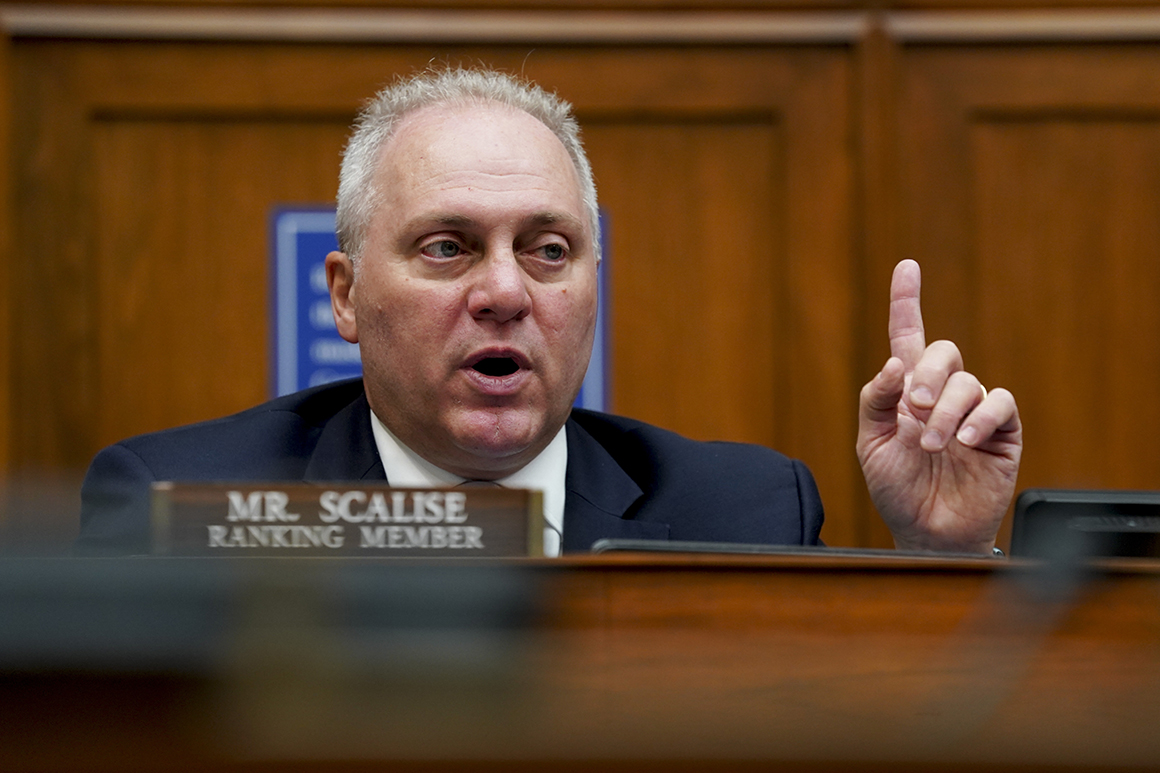 That Republican confidence extends to Tuesday’s gubernatorial election in Virginia, where the neck-and-neck race between Democrat Terry McAuliffe and Republican Glenn Youngkin could prove a fresh political barometer for both parties. Democrats are racing to lock in an agreement on the social spending framework Biden’s White House released last week and set up a House vote “as early as possible this week,” a leadership aide said late Sunday.

“I really think that we can come to a resolution very quickly,” said Rep. Alexandria Ocasio-Cortez (D-N.Y.), one of several progressives who blanched at an infrastructure vote last week. “We have 96 to 98 percent of the caucus on the same page. We just need to figure out what these two folks are willing to commit to. And once we get real clarity on that … then we just move them forward.”

Speaker Nancy Pelosi and her leadership team had prepared for the Rules Committee to meet on the bill as soon as Monday. However, they adjusted that timeframe as Democrats raced to finish a compromise on Medicare prescription drug negotiation.

Notably, the House GOP hasn’t waited for Democrats to fully assemble their social spending bill before stepping up its attacks on the substance of the plan. Among the Democratic proposals that Republicans have singled out for scorn is a plan to beef up IRS reporting requirements that did not make it into the framework the White House released last week and has drawn public criticism from Sen. Joe Manchin (D-W.Va.).

Another Democratic provision that’s drawing GOP attacks is a proposed fee on methane generated by oil and gas facilities that, while it was also left out of the White House-released framework, was later included in draft social spending bill text unveiled by the Rules Committee. That fee, whether or not it’s included in the final measure, would represent only one plank of a total climate-change investment in the Democratic bill that could top $500 billion.

As their leaders continue honing their message against the party-line Democratic social spending bill, a handful of House Republican centrists are still working to hold together on the Senate-passed infrastructure bill. Reps. Brian Fitzpatrick (R-Pa.) and Josh Gottheimer (D-N.J.), the two co-chairs of the bipartisan House Problem Solvers Caucus, have been working behind the scenes to whip Republicans in favor of the infrastructure measure, which they want considered a separate vote from the social policy bill.

Their numbers have winnowed. GOP members who were originally inclined to support the Senate-approved legislation have peeled off as Democrats continue tying the infrastructure bill to the separate social spending plan designed to pass without GOP votes. Republicans in favor of the infrastructure bill believe they have 10 GOP members who will back it, with another five votes possible, according to sources.

But they also warn that the longer the House waits to vote on infrastructure, the more that GOP support could slip. In general, Republicans are no strangers to the squirm-inducing sight of legislative negotiations blown up by members of their own party — a common sight during the conservative Freedom Caucus’ earliest days operating under a GOP majority. That hasn’t stopped most of them from enjoying their political opponents’ struggles.

“It may mean Build Back Never,” Rep. Matt Gaetz (R-Fla.) said of the intra-Democratic tension, “if it appears positions have calcified.”

Heather Caygle contributed to this report.

Putting the War in Ukraine in Context

Trump is looking just vulnerable enough to challenge in 2024, and he knows it

Belgium 3-1 Estonia: Roberto Martinez’s side qualify for World Cup with a game to spare