How Casey Cadwallader Has Defined a New Generation at Mugler

On a chilly Paris morning in October, just a few days before the release of Mugler’s fall 2021 collection, creative director Casey Cadwallader is deep in thought. He’s mulling the impact of digital shows on the heels of the busiest fashion month since the onset of the Covid-19 pandemic. While many of the most prominent fashion brands opted for massive shows this past season—there was Balmain’s concert, and Balenciaga’s red carpet premiere—Mugler chose to forgo the festivities in place of a quiet video directed by Torso Solutions. Cadwallader, who took the helm at Mugler in 2018, opted for diverse casting as usual—bringing in a mix of top models including Bella Hadid, plus new industry favorites like Jill Kortleve, Precious Kevin, and icons like Dominique Jackson. In the video, they’re seen storming through a white room while a camera zips up and down, creating a feeling of stark intensity. And then there are the clothes: wrap tops with straps and attached gloves made of sheer material, body-hugging corsets, and one particularly modern take on a Little Black Dress with gold accents were eye-catching, to say the least. Fall 2021 also marked the second digital Mugler collection Cadwallader designed and unveiled with a video (last season starred Hunter Schafer, Patia Borja, and Bella Hadid—who was sent hurling through the air like a figure skater in a feat of CGI magic), and is a continuation of Cadwallader’s designs being available on a see-now-buy-now basis.

Weak Euro, Strong Dollar: What It Means for Fashion

In Jewelry, the Glitter of Gold

“There’s something about video that I can’t give up,” Cadwallader tells me. “While many houses were falling back into line [during] fashion week, I was hesitant about doing that. I didn’t really want to have a show where a lot of editors wouldn’t be there. But there was just something else about it where I was like, I don’t know if I’m done with this film thing yet, because it was such an experiment.” 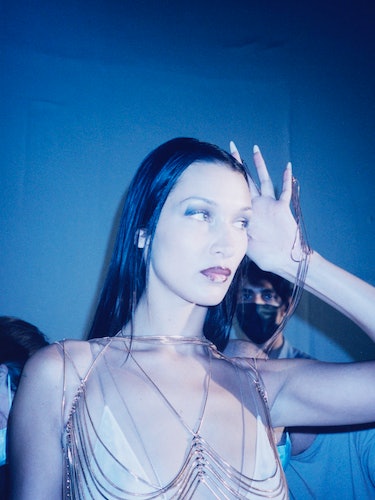 “Video accentuates the curves of the cast members, their eye contact, the way they can move,” he adds. “It’s not just walking in a straight line, staring at a camera—they can’t leave with no emotion. Most fashion shows now are broadcast to everyone through each editor’s phone in their hand. This is a new way of curating that and bringing everyone’s eyes exactly where we want them to be. It’s like the ultimate control.”

Since Cadwallader began his post at Mugler three years ago, he has transformed the brand into undeniably one of the most fun Paris labels to watch, especially when it comes to casting. In addition, the new Mugler is all about bodycon with a modern, athleisure spin. Think two-way stretch corsets, pants with sheer splices, gold chains worn as tops, and lots and lots of denim—all of which have been worn by Beyoncé, Dua Lipa, Megan Thee Stallion, and many more. (The bodysuit marks such a major Mugler statement that W magazine dubbed the garment “the pop star uniform” earlier this year.) Cadwallader himself has taken to only wearing the label’s spiral, baggy jeans paired with oversized tailored pieces when he’s going out for a big night. “I feel funny when I wear jeans without a bunch of seams on them now,” he says with a laugh.

Behind the scenes at the Mugler fall 2021 presentation shoot. Photographed by Erika Kamano. 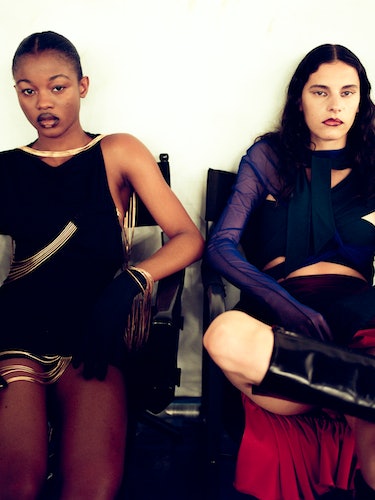 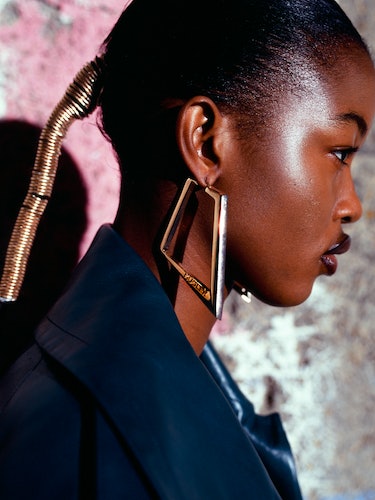 While the original Mugler archive pieces look like they could be worn onstage or by a performer, Cadwallader’s Mugler is about being on the move and owning oneself in a way that is singularly unique. “For me, the legacy of the brand has always been about inclusion. It’s always shown a spectrum of gender,” he says. “There’s a lot to do with the craft and the curves and the appreciation of the body that resonate with me—this aspect of performative culture, about people on the stage, about dancers and singers, and how fashion takes from all of those creative arts to magnify each other. But culture has changed so much in the last 20, 30 years. And there’s a whole new way to express this brand.”

Those reinterpretations include going directly to the source: the vast Mugler archive which Cadwallader says is so visually rich, it’s often overwhelming. Each season, Cadwallader chooses a different focus. And lately, he’s been looking at shiny vinyl jersey catsuits and tailored separates piled on top, circa 1997. To make these pieces modern for fall 2021, Cadwaller found a tech jersey fabric with a vinyl-like exterior and reinvented it. The designer also rendered an archival strappy bra in his favorite material, denim, and put it on top of a sweatshirt. “This infusion of new technology into the house codes is always something I’m trying to play with,” he adds. “It’s not about turning a man’s head, it’s about making you feel awesome. It’s about being sexy as an extension of your own confidence.”

It’s no wonder Cadwallader tends to get a little intellectual about his references. The Cornell University architecture graduate spent time behind the scenes at TSE, Narciso Rodriguez, Loewe, J. Mendel, and Acne Studios before joining Mugler. “Even before I knew I was gay, I was into clothes because of [my] mom,” says Cadwallader. “[She trained me] to think like an architect. It was about concepts: what is the point of what you’re doing? What makes it special? How are you innovating that construction, what are the implications and how does it change someone’s life?”

With an architectural approach, the intrinsic bodycon aesthetic of the new Mugler makes sense—but the designer is looking to approach what bodycon is, and is perceived as, in the year 2021. “Bodycon implicitly brings in this sense of the ‘90s,” Cadwallader says. “And in the ‘90s, the ideal of beauty hadn’t quite been opened up yet. I think bodycon in that time meant that you were showing how skinny you were. That’s not what bodycon means anymore—it means loving the body that you’re in and showing it.” Although the brand has cast a wide array of characters to appear in its shows, there are only a handful of plus-size people—very much within society’s standards of beauty—in this season’s show. And by fashion’s standards, especially in Europe, that’s a lot. Still, we’d love to see the brand expand into inclusivity even more with the kind of sentiment Cadwallader speaks about. 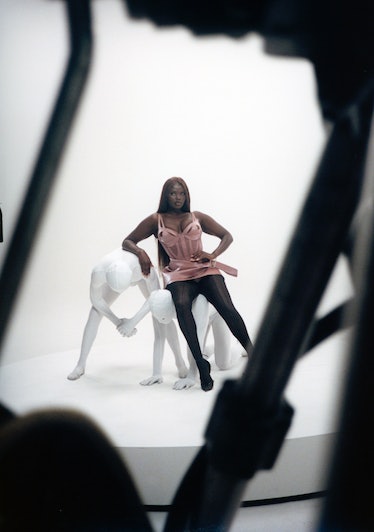 There’s no denying that Mugler has become defined by the cast of cool characters surrounding it. Where else can you see Lola Leon and Amber Valletta joined at the hip? And what other label sees Cardi B, Rihanna, and Megan Fox wearing dramatic pieces all in the span of a little over a week? “The casting is always extremely personal,” says Cadwallader. “It’s about telling stories on different types of women because all of these people are very different. We try to make sure that each cast member is representing a different side of the prism of beauty.”

That approach to beauty is exactly what Cadwallader has been trying to instill into his version of the Mugler brand “What I don’t want in fashion in general is to tell stories we’ve already been told before,” he says. “A lot of fashion houses have people that come from similar experiences in their shows, especially if they’re professional models. We have a lot of people who aren’t models.”

Up next for the brand, Cadwallader is wondering how to make Mugler even more digitally forward. While he finds inspiration in the big, festive shows that the founder of the brand put on during the ‘80s and ‘90s, he’s still thinking about what the future might hold when it comes to digital-only shows. “I just wanted to cut out the waiting to really make it connect,” he says. “There are a lot of ways that digital media can make people understand the clothes better.”

Weak Euro, Strong Dollar: What It Means for Fashion

In Jewelry, the Glitter of Gold

Rassie’s radical refereeing plan to ‘save’ rugby: Get 5 of them on the field

Avatars and Identity in the Metaverse, Part 1