Catalytic converter thieves are revving up their operations in the Big Apple — the crime has accelerated 269% so far this year, NYPD data show.

Citywide, 5,548 catalytic converters have been ripped off through Aug. 14, compared to the same period last year, when 1,505 were reported stolen, according to the stats.

On Staten Island, catalytic converter thefts soared to 362, up from just 47 the year before, for a meteoric 670% increase — the biggest surge in the five boroughs.

One Staten Island auto repair mechanic pointed the finger at the Garden State.

“I hear they are coming from New Jersey. They jump on the bridge [Goethals or Outerbridge Crossing], take what they can and go back to Jersey,” said the shop owner, who requested anonymity.

A catalytic converter, which contains rhodium, palladium and platinum, is a piece of the automobile’s exhaust system that breaks down some of the smog which would otherwise come out of the tailpipe. 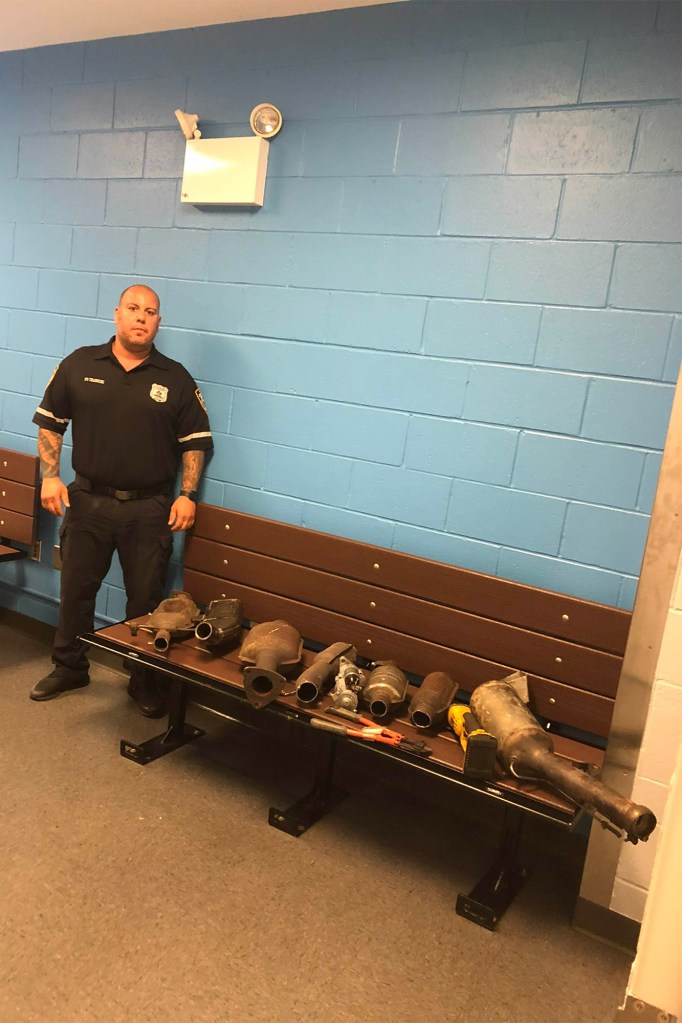 Crooks can get up to $300 for a standard catalytic converter and up to $1,400 for the part from hybrid vehicles.

The rare metals inside the part trade for four and five figures, and thieves take the stolen convertors to scrapyards or hawk them on the black market.

As of mid-Friday afternoon, platinum was going for $909 an ounce, while palladium was valued at $2,177 an ounce and rhodium was fetching an off the charts $14,350 an ounce, according to moneymetals.com. Converters typically include 3 to 7 grams of these precious metals, experts said. 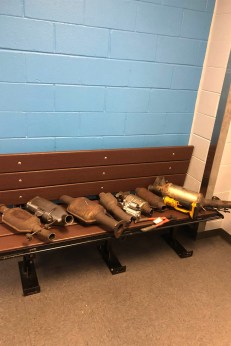 The victims are left with a roaring noise from the exhaust system — and a hefty repair bill since the part can cost thousands to replace.

Toyota Priuses are prime targets because they have up to three converters, depending on the model year, and because low-emission vehicle parts are often in better condition.

The ripoffs, most of which are considered as petty larceny under New York law, continue to soar because copping catalytic converters is a non-violent, tough-to track-crime — and little punishment if caught.

The bail eligible offense means that, even if arrested, the cat thieves are back on the prowl in no time.

“A petty theft in the eyes of our new progressive criminal justice model is meaningless. It’s a low-risk high-reward crime,” said Joseph Giacalone, a retired NYPD sergeant and adjunct professor at John Jay College of Criminal Justice in Manhattan.

Former NYC ballerina Antonia Franceschi was being driven by her son to JFK Airport in June when she heard a loud rumbling noise emanating from her 2005 Honda CRV.

She did not know it at the time, but her “cat” had been boosted.

“I was so beyond pissed off,” Franceschi, 62, now a choreographer, told The Post. “It was horrible. It was embarrassing. My son had parked the car at Riverside Drive and 94th Street. There’s nobody around.”

The NYPD is trying to put the brakes on the opportunistic thieves.

The department has introduced an etching program that allows individuals to inscribe a code/number to a catalytic converter, and then link that code to a website where it can be tracked.

Giacalone has doubts about the program.

“They [thieves] don’t want to resell the part, just what’s inside. I think cracking down on the scrap yards that buy them is the way to go. Maybe some undercover sells and then hit them with a closure through nuisance abatement.”

Ex-ballerina Franceschi offered her advice to thwart cat thieves: “You have to park the car where there’s a doorman or it’s busy. This is New York City. You have to weave and bob. You have to adapt. It [the city] keeps you on your toes.”

Do they Bite? Are they Dangerous?