Ukraine has released chilling new footage showing people inside a shopping centre as it was struck by a Russian missile on Monday, after the Kremlin insisted the complex was ‘non-functioning’.

The newly released footage was captured by CCTV cameras in and around the Amstor mall in Kremenchuk, central Ukraine, and shows people running and diving for cover as the rocket slammed into the building.

Two cameras inside the same shop captured the moment the missile struck, sending goods flying off the shelves and the shopkeeper running for cover.

Two more cameras on the exterior of the complex showed debris landing on the ground outside the mall. Another exterior camera showed smoke rising from the building as it was hit, and two passers-by narrowly avoiding flying debris.

Another camera, looking out over a parking bay, captured the rocket a split second before it flew into the building – causing a huge blast.

The new footage – released by Ukraine’s security service – debunks the claim from Igor Konashenkov, a spokesperson for Russia’s defence ministry, who said the mall was ‘non-functioning’.

At least 18 people were killed in the strike with another 21 still missing as-of Wednesday, with rescuers warning they are unlikely to have survived an inferno which gutted the mall and caused the roof to collapse.

Identifying victims is proving difficult, with some bodies burned beyond recognition. 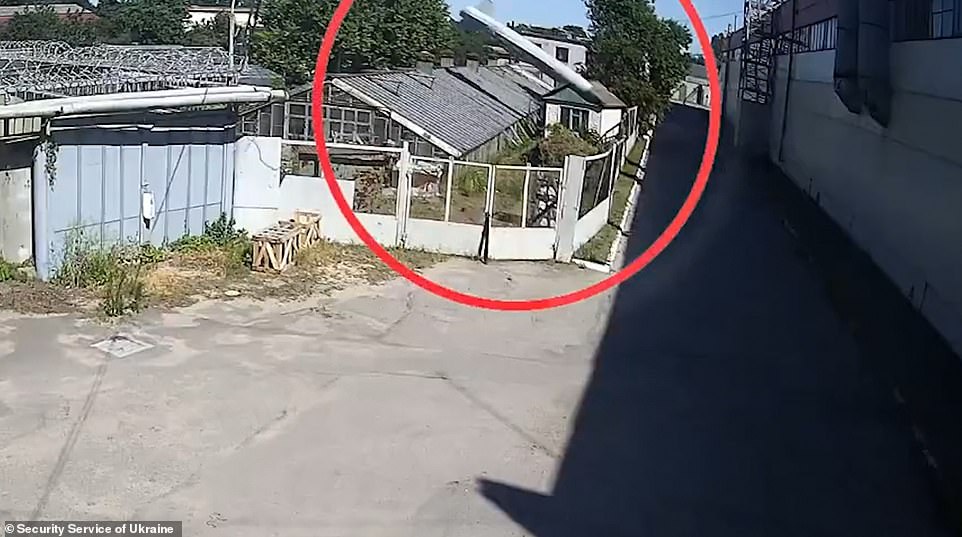 Pictured: The Russian missile is seen a split-second before striking the Ukrainian shopping mall on Monday. At least 18 people were killed in the strike 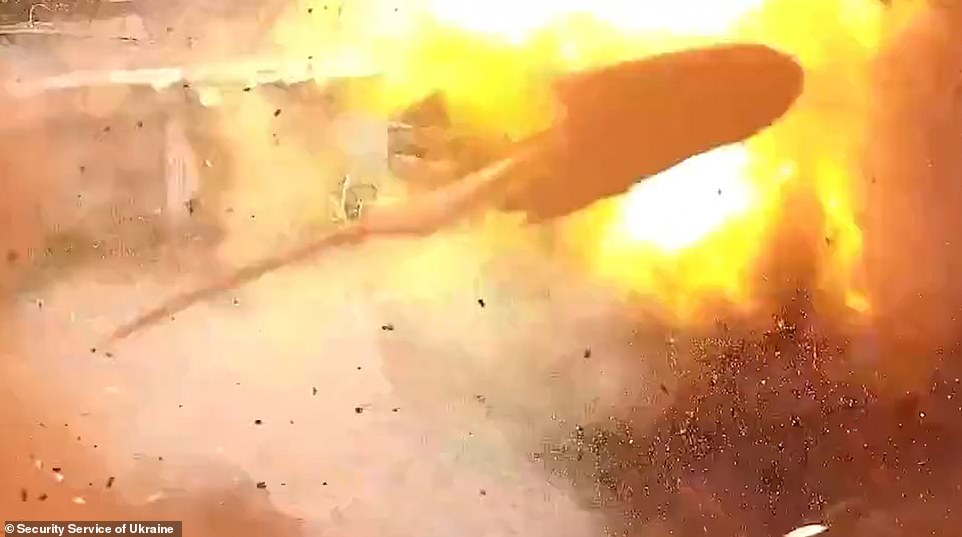 Pictured: An explosion is seen after the missile struck the Amstor mall in Kremenchuk

Other footage from the complex released this week showed what appeared to be a guided AS-4 Kitchen missile – originally designed to take out US aircraft carriers – slamming into the shopping centre shortly before 4pm local time Monday.

More footage taken from cameras in a nearby park showed the moment a second missile struck the Kredmash factory, which sits behind the mall, destroying four warehouses and raining debris down on passersby.

Ukraine accuses Russia of hitting the centre on Monday in Kremenchuk, found 205 miles southeast of Kyiv, in what is being talked about as a war crime.

Russia denies the accusation and previously claimed its missile salvo was aimed at an arms depot and the centre was not in operation at the time.

Funerals were set to be held on Thursday for some of the 18 people confirmed killed by Monday’s Russian missile strike. 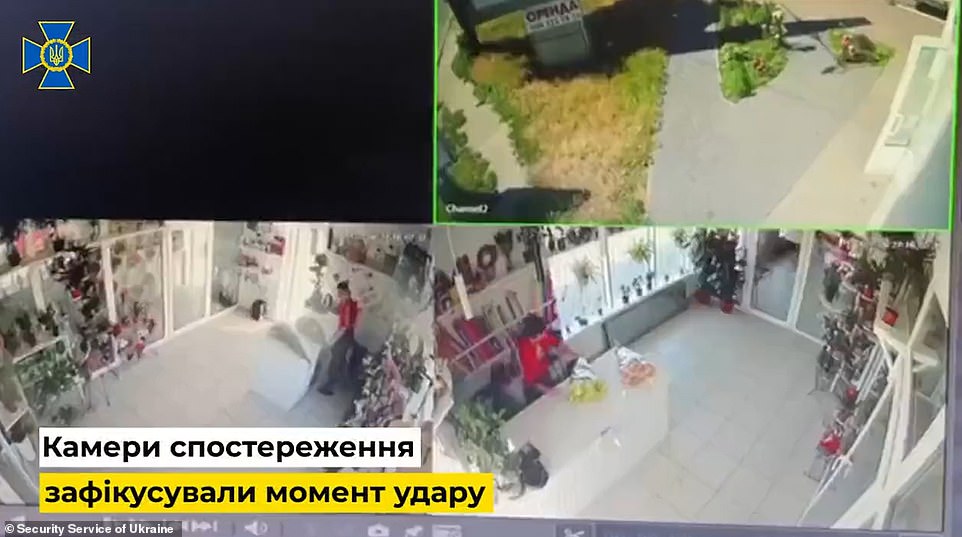 Two cameras (footage shown bottom row) inside the same shop captured the moment the missile struck, sending goods flying off the shelves and a shopkeeper running for cover 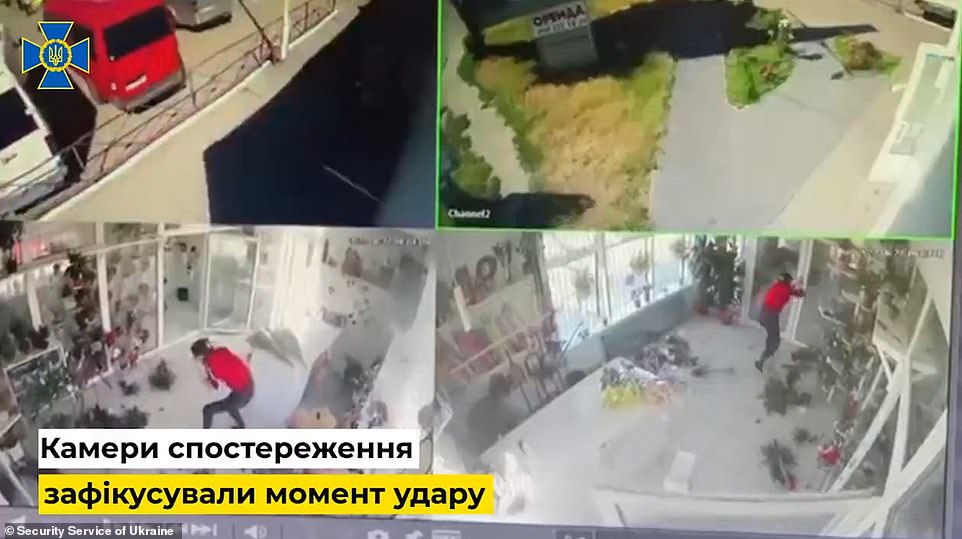 Pictured bottom row: A shopkeeper is shown running for cover as the shopping centre is hit by a Russian missile on Monday 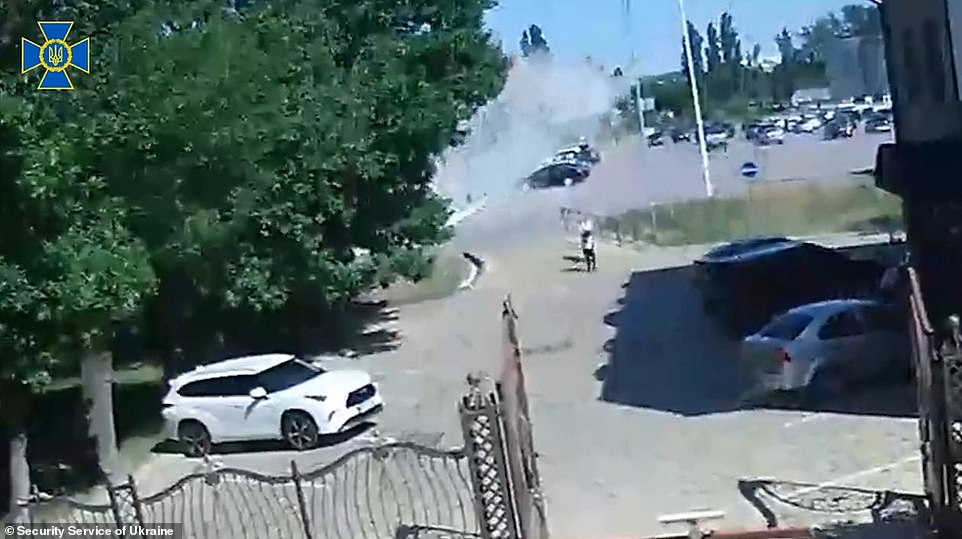 Pictured: CCTV footage shows smoke rising on Monday after the shopping centre was struck by a Russian missile. Debris was launched into the air and passers-by were lucky not to be hit

After the attack on the shopping centre, Ukrainian President Volodymyr Zelensky accused Russia of becoming a ‘terrorist’ state. On Wednesday, he reproached NATO for not embracing or equipping his embattled country more fully.

‘The open-door policy of NATO shouldn’t resemble old turnstiles on Kyiv’s subway, which stay open but close when you approach them until you pay,’ Mr Zelensky told NATO leaders meeting in Madrid, speaking by video link.

‘Hasn’t Ukraine paid enough? Hasn’t our contribution to defending Europe and the entire civilisation been sufficient?’

He asked for more modern artillery systems and other weapons and warned the NATO leaders they either had to provide Ukraine with the help it needed to defeat Russia or ‘face a delayed war between Russia and yourself.’

‘Our army does not attack any civilian infrastructure site. We have every capability of knowing what is situated where,’ Putin told a news conference in the Turkmenistan capital of Ashgabat.

‘Nobody among us shoots just like that, randomly. It is normally done based on intelligence data on targets’ and with ‘high-precision weapons’.

‘I am convinced that this time, everything was done in this exact manner,’ Putin said.

Since Putin ordered his forces into Ukraine, Moscow has insisted it has not targeted civilians, despite vast amounts of evidence on the contrary.

Russian forces have bombed civilian sites indiscriminately, and there have been several instances where Ukrainians have been shot, tortured and raped. 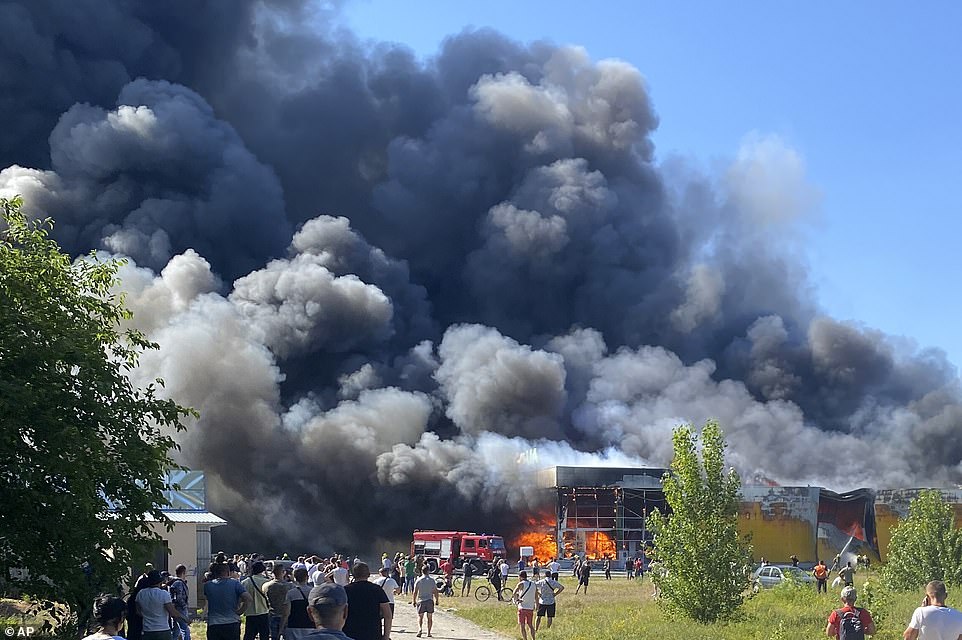 Onlookers gather as the shopping centre is engulfed by flames shortly after it was struck by two Russian guided missiles on Monday, while an estimated 1,000 people were inside 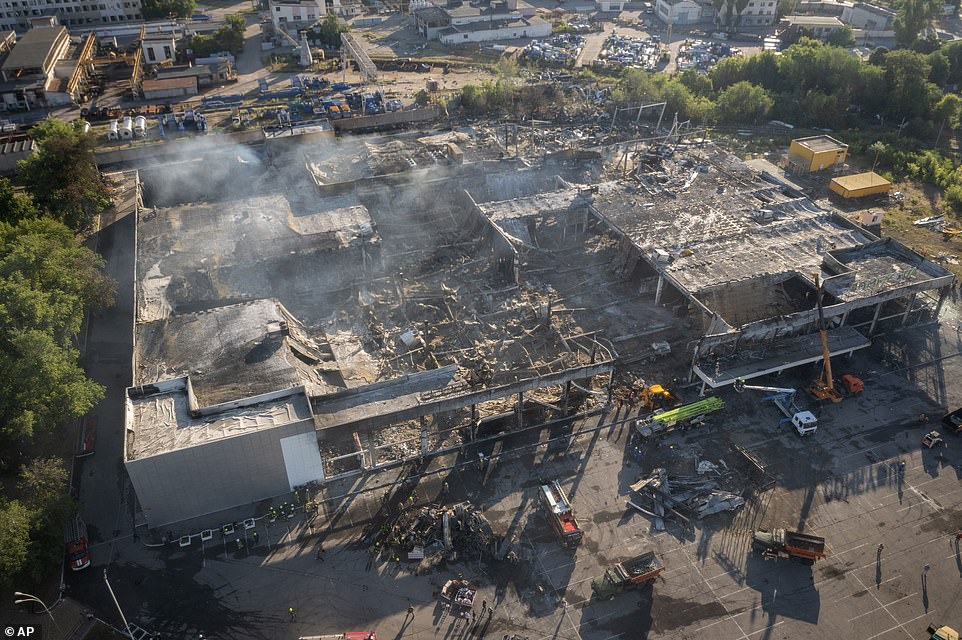 Smoke rises from the ruins of the Amstor shopping mall in the city of Kremenchuk, central Ukraine, after it was struck by long-range guided missiles that Ukraine says were fired by Russian bombers

On Tuesday, the Russian military first claimed it struck a weapons depot in central Ukraine the previous day and the resulting explosions hit a closed shopping mall.

The strike hit ‘a depot with weapons and ammunition from the USA and European countries in the vicinity of the Kremenchuk automobile factory’, the Russian military said in a statement.

‘The explosions of ammunition for Western weapons sparked a fire in the nearby shopping mall, which was not operational at the time.’

‘I have nothing to add,’ said Kremlin spokesman Dmitry Peskov.

Russia’s defence ministry admitted being behind the attacks – despite one politician initially blaming Ukraine for bombing its own people – saying the factory was being used as a store for western weapons which were due to be transported to Donbas.

It denied striking the mall, and said the second missile actually hit a train station.

But Ukraine says Russia deliberately targeted the mall in a ‘terrorist attack’ designed to sow fear among civilians, and that there were no arms being stored at the factory – which manufactures parts for civilian vehicles, among other things.

Footage from the complex tallies more closely with Kyiv’s account than Russia’s. 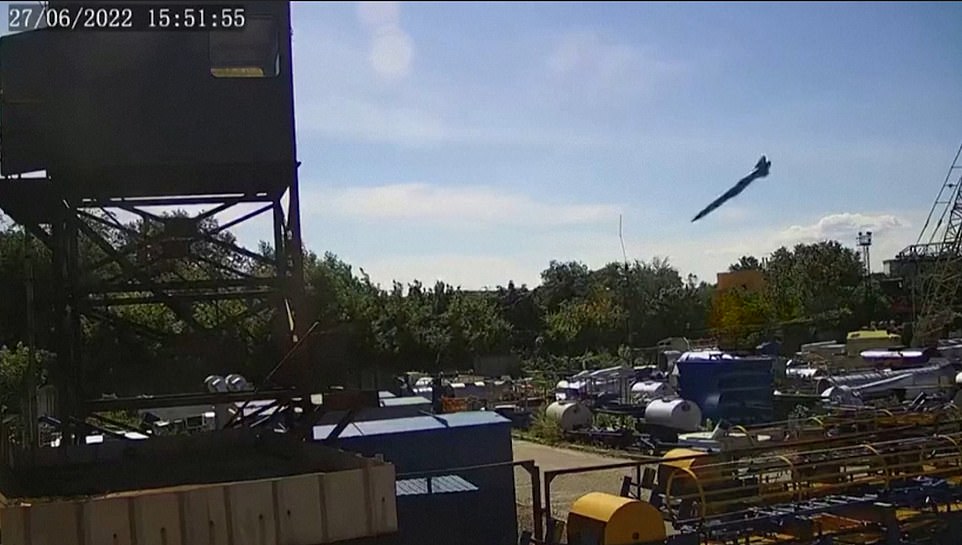 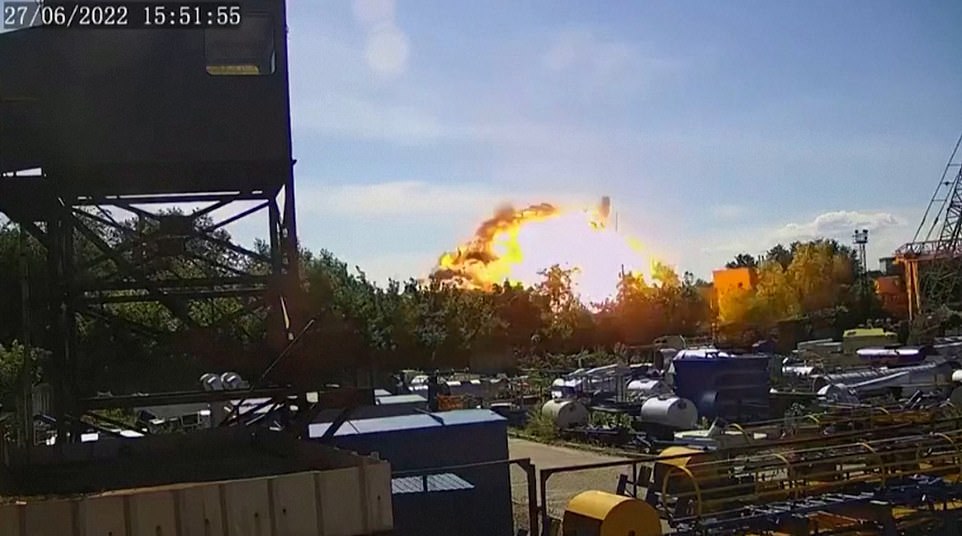 The footage directly contradicts Kremlin claims that it destroyed a nearby factory being used to store weapons and a train station, and that the mall accidentally burned down after flames from those strikes spread 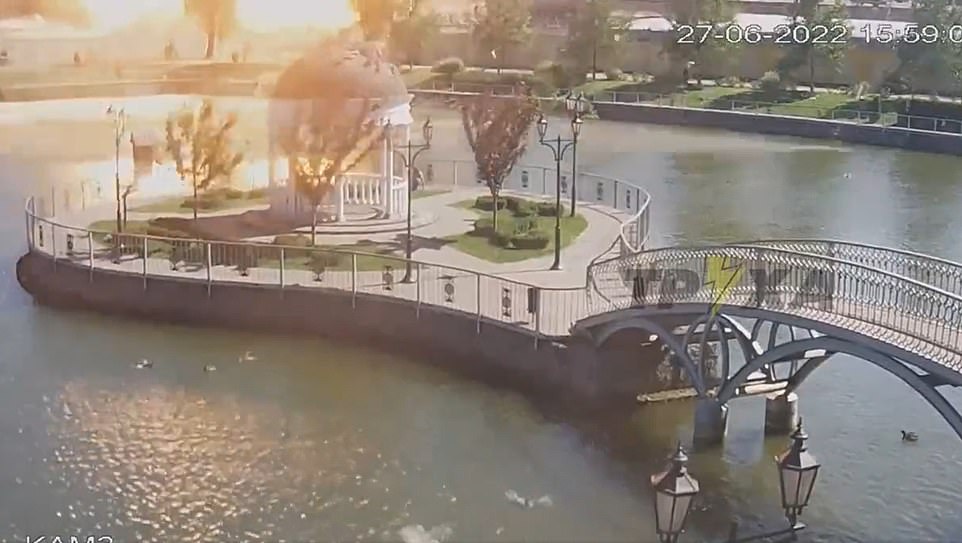 This is the moment a Russian missile slammed into a factory in the city of Kremechuk, central Ukraine, after another rocket blew apart a nearby shopping mall and killed at least 18 civilians 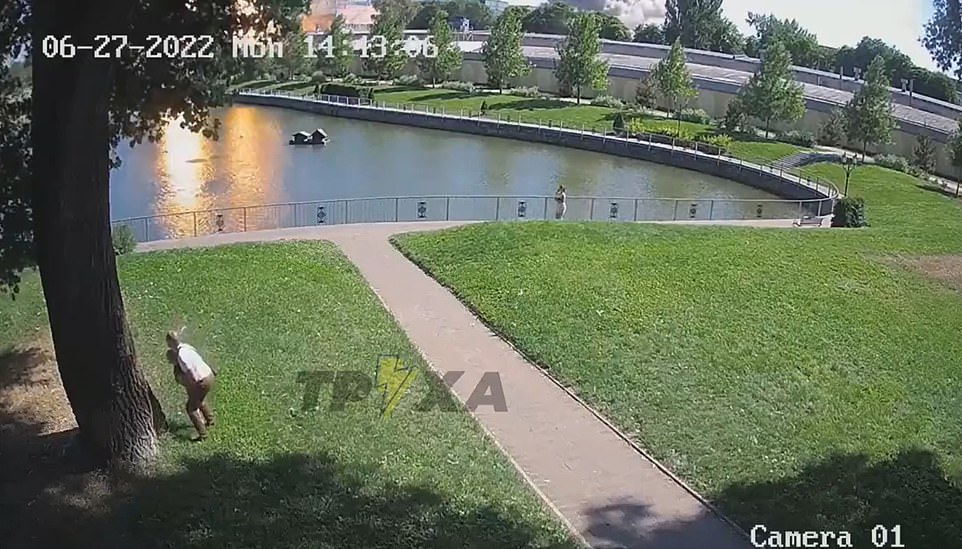 CCTV captures panicked locals running for cover as smoke rises from the first blast (top right, behind the trees) before a second missile hits (top left) – sparking a huge fireball and shockwave

Mykhailo Podolyak, one of President Zelensky’s top advisers who posted some of the footage online, wrote: ‘Russian propaganda always lies: There is no coincidence, [the strike] was a deliberate blow to intimidate the population and cause mass casualties.’

On Wednesday, Pope Francis called the bombing of the crowded shopping centre the latest in string of ‘barbarous attacks’ against Ukraine.

‘Every day, I carry in my heart dear and martyred Ukraine, which continues to be flagellated by barbarous attacks like the one that hit the shopping centre in Kremenchuk,’ Francis told crowds in St. Peter’s Square on the feast of St. Peter and Paul.

‘I pray that this mad war can soon end and I renew my appeal to persevere without tiring in praying for peace.

‘May the Lord open the those paths to dialogue which men either do not want or not able to find. May they not neglect to help the Ukrainian population, which is suffering so much,’ he said.

10 Lead Generation Strategies To Follow For Your eCommerce Business