BROWNING, Mont. — Kenneth Cook used a mallet and a chisel to crack into a pig’s skull in the gravel driveway outside his home on the Blackfeet Indian Reservation in northwestern Montana.

The Benefits of Acupuncture Treatment

Cook planned to use the pig’s brains in brain tanning, practiced by Indigenous people for thousands of years.

The brains are mushed up in water and worked into deer and elk hides to make leather. Cook said the brain’s fatty acids both soften the hide and give it a beautiful white color before it’s smoked for waterproofing.

“Brain will give you the strongest, longest-lasting leather. So, that’s why people prefer it,” he said.

Cook uses the hides he tans to make drums, moccasins, and tribal regalia. Typically, Indigenous people like Cook use the brains of animals they hunt to tan the hides. But Cook has switched to pig brains for all his tanning, in part because of chronic wasting disease, which afflicts deer, elk, and moose.

Chronic wasting disease is caused by misfolded proteins called prions, which deteriorate an infected animal’s brain and bodily functions until it dies — typically within a couple of years of infection. The disease has spread among herds across North America since it was first discovered in wild animals more than 40 years ago in Colorado and Wyoming.

Chronic wasting disease has been detected in just one white-tailed deer on the Blackfeet reservation, but once it’s present, it’s impossible to eradicate, according to wildlife managers. The disease is already forcing tribal members to alter or abandon traditional practices like brain tanning, said Souta Calling Last, a Blackfeet researcher and executive director of the nonprofit cultural and educational organization Indigenous Vision.

Calling Last also worries the spread of chronic wasting disease will prevent tribal members from eating wild game. Some families depend on meat from the deer, elk, or moose they can hunt several months out of the year.

That’s where the dogs come in. Calling Last received a $75,000 federal grant to run a yearlong study to train dogs to sniff out chronic wasting disease and toxic waste that might otherwise be ingested by people who hunt wild game and gather traditional plants. The project aims to protect tribal members’ health by letting them know where the disease has been detected and where toxic waste has been found to preserve safe spaces to conduct traditional practices. 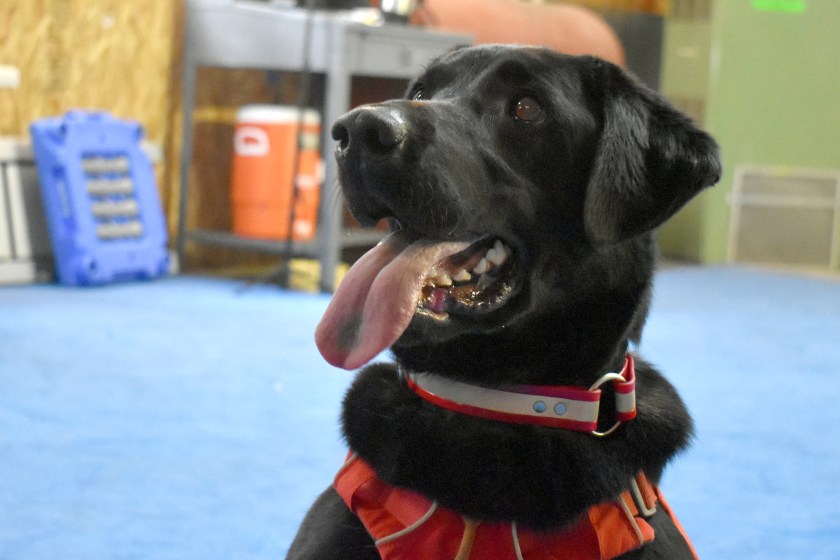 Charlie, a 4-year-old Lab, is in training for a project on the Blackfeet reservation that marks the first attempt to see whether dogs can detect chronic wasting disease outside the lab. (Aaron Bolton for KHN)

The Centers for Disease Control and Prevention recommends that people don’t eat meat from animals that test positive, though there’s no proof the disease can be transmitted to humans. Rocky Mountain Laboratories researcher Brent Race said the possibility of the prions infecting humans hasn’t been ruled out. He noted brain matter would be especially dangerous to handle, as Cook does in his brain tanning, since it holds the highest concentration of the prions that cause the disease.

Standing near a wetland full of cattails, Calling Last said the dogs trained by the nonprofit organization Working Dogs for Conservation will detect chronic wasting disease in deer and elk scat at such sites that serve as watering holes for herds. The idea is to help alert wildlife managers of the disease’s presence as early as possible.

The dogs also will sniff out mink and otter scat so it can be tested for chemicals and contaminants in illegal dumpsites of old cars, furniture, and appliances.

Calling Last plans to send scat, soil, and water samples for testing from locations where the dogs alert their handlers to confirm they found chronic wasting disease. If Calling Last’s project proves dogs can effectively do this work, Working Dogs for Conservation trainer Michele Vasquez said, the organization hopes to expand the effort across the country. 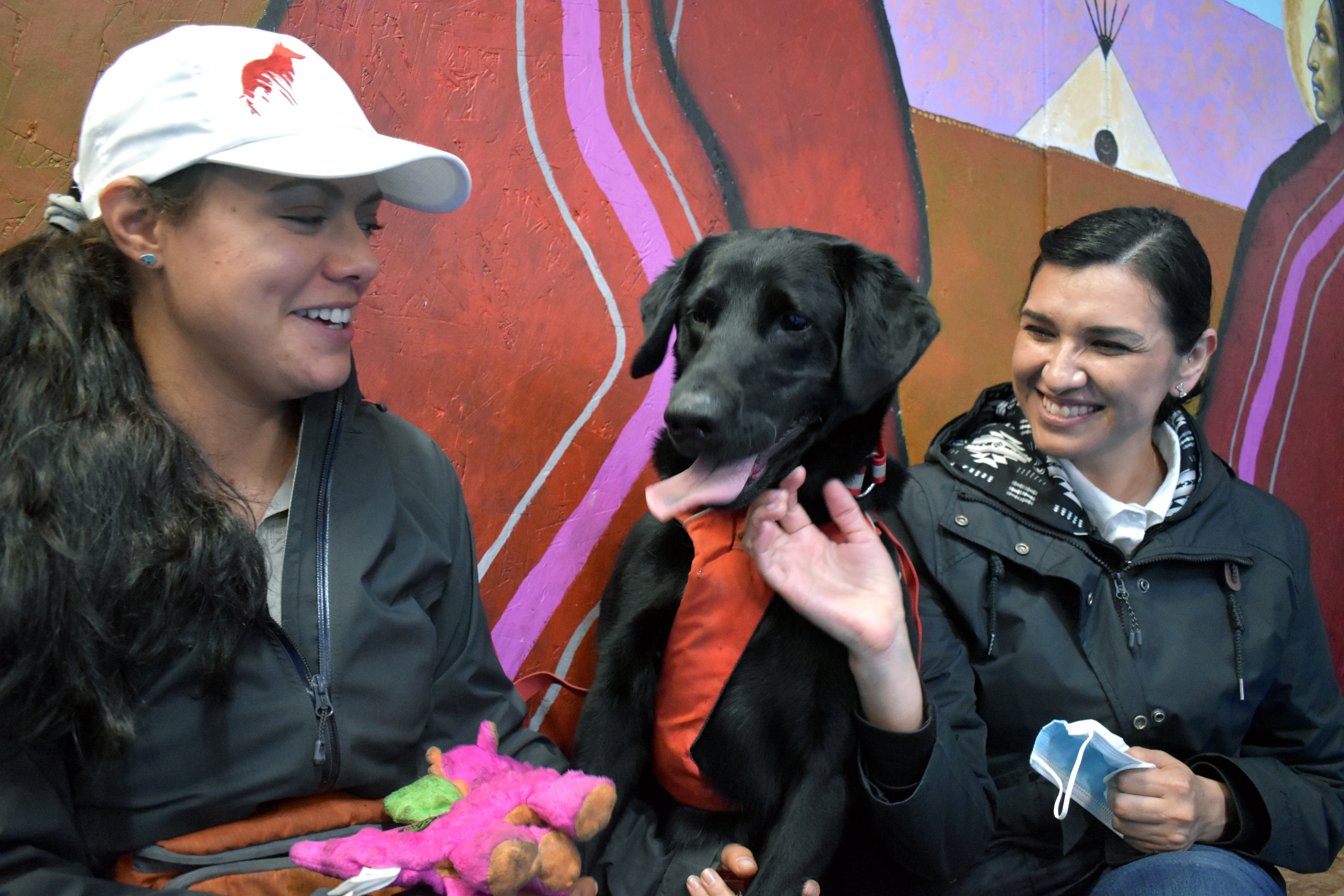 Researchers from the University of Pennsylvania’s veterinary school have been studying whether dogs can detect chronic wasting disease in the lab, but the project on the Blackfeet reservation is the first attempt to do so in the field, according to Vasquez.

The training was taking place at a special facility outside Missoula. There, Vasquez ran her 4-year-old black Labrador retriever, Charlie, through his paces detecting black-footed ferret scent hidden in one of several containers. It’s one of many scents the excitable Lab is trained to detect.

“They each have something different in them. So, we’ll have distracters,” she said. Those distracters could include food or scents of other animals the dogs will encounter in the field.

Joe Hagberg of the Blackfeet Fish and Wildlife Department said he hopes the dogs will be able to determine whether chronic wasting disease still is present where it was first detected on the eastern portion of the reservation.

“It will help us out tremendously,” he said, standing on the edge of a flooded creek near where the positive animal was shot. Following the 2020 detection, Hagberg shot several sickly-looking deer to understand how prevalent the disease was.

“We harvested 54 deer out of here all throughout … the area in a 10-mile perimeter,” he said. “We all had negative tests throughout those ones.”

Hagberg is happy with those results, but he said his resources to look for the disease in other areas of the 2,400-square-mile reservation are limited. 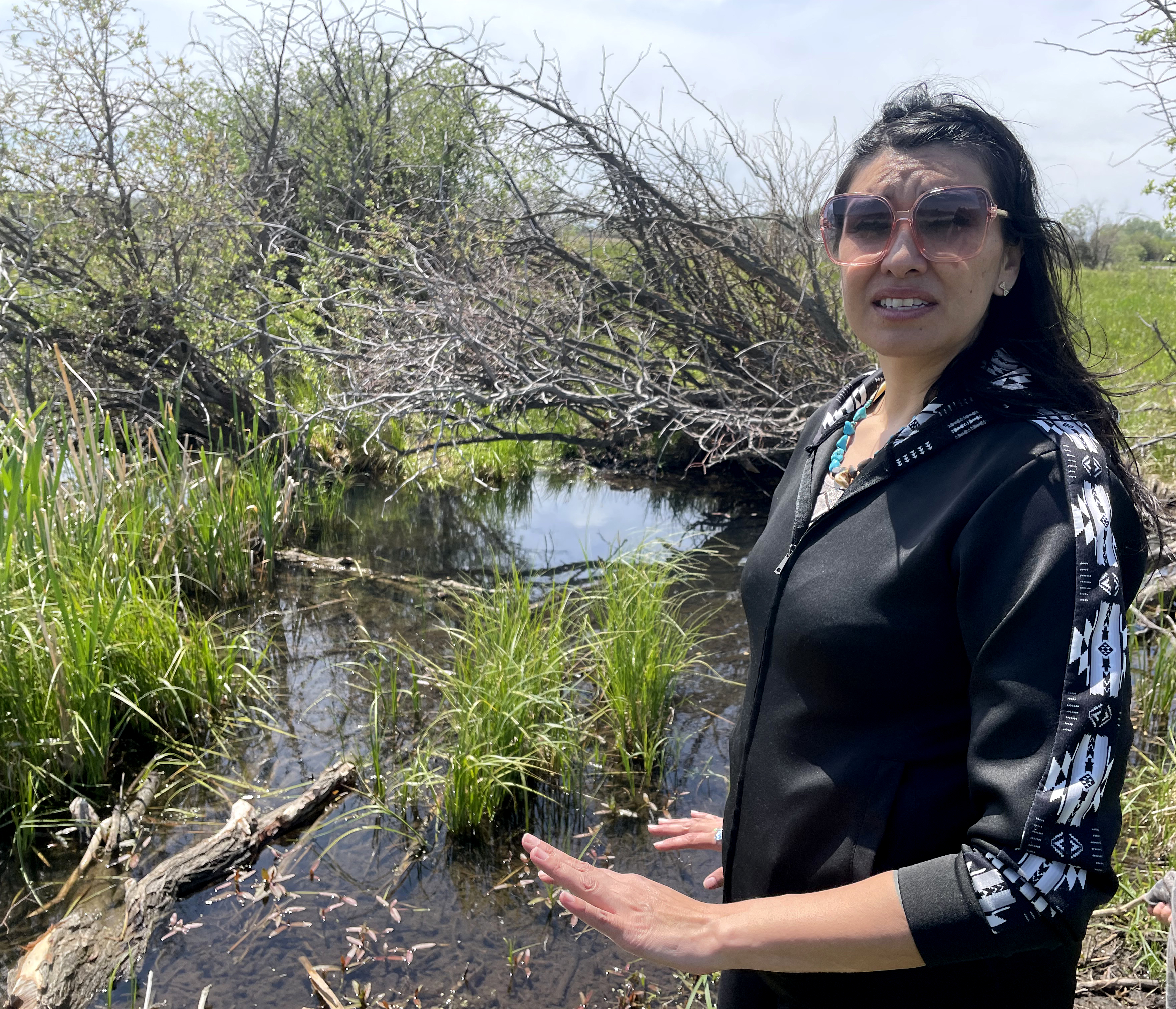 Blackfeet researcher Souta Calling Last surveys wetlands that serve as a watering hole for deer, elk, and moose on the Blackfeet Indian Reservation in Montana. Calling Last is heading a program that will take dogs to sites like these to sniff out chronic wasting disease. (Aaron Bolton for KHN)

Calling Last hopes the soon-to-be working dogs will give officials like Hagberg an advantage in trying to contain the disease, which can spread undetected for years before it decimates a herd.

She plans to publish a study on her work and seek additional funding to replicate it for other tribal nations in Montana and Wyoming, many of which are in areas where chronic wasting disease is more prevalent.

Calling Last said the Blood Tribe, one of the Blackfeet’s sister tribes in Canada, has already obtained grant funding for a similar project.

“I think that just being able to monitor it, record it, and know definitively that you’re harvesting food that doesn’t contain the prion would be a big win for any nation,” Calling Last said.

The Benefits of Acupuncture Treatment

Even the CDC Is Acting Like the Pandemic Is Functionally Over

Scotland Just Showed How Easy It Is To End ‘Period Poverty’

Did Your Handbag Help Destroy the Rainforest?

How to Build a Healthcare Content Marketing Strategy: A 10-Step Guide