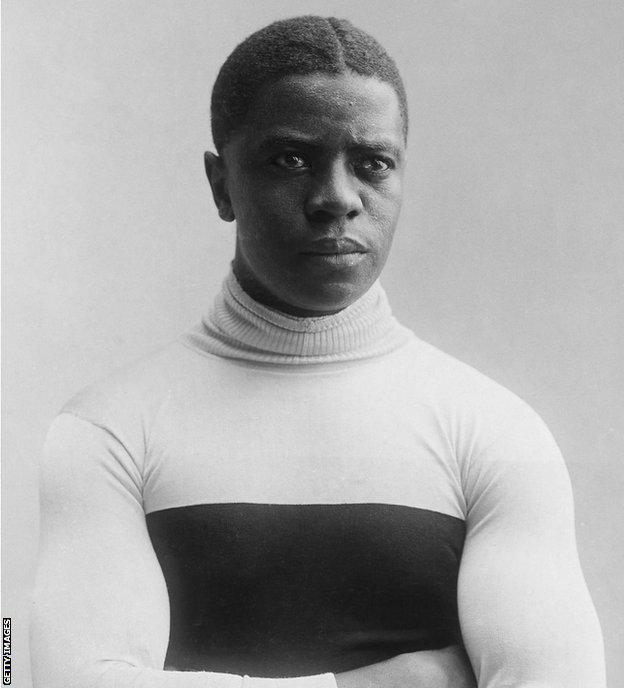 Taylor, pictured in 1906, was also known as ‘The Black Cyclone’

With the smell of chicken and potatoes cooked over oil stoves hanging in the midnight air, the crowd chattered and beat their hands together, trying to stay warm.

From a small canvas tent by the side of a wooden, banked oval track, the athletes emerged. They weren’t here for basketball, or for boxing. This was a bicycle race on 6 December 1896.

On machines not so different to those we recognise today, 28 male athletes made up the field – 27 of them white.

Marshall ‘Major’ Taylor was a trailblazing African American sportsman. He was in New York that day to take part in a race they most definitely don’t run now: the six-day endurance event.

It meant riding a bike with no brakes and no ability to coast if you become tired, in the middle of winter, only stopping to rest if you dared, for nearly an entire week. Perhaps unsurprisingly – given the rigours of American football and ice hockey – the public absolutely loved it.

And it was the race that launched Taylor’s career.

Aged 18, he crashed twice and insisted on just one hour’s sleep for every seven he rode. He might only have finished eighth, but a star was born. Three years later he was a world sprint champion – over a century would pass before another black cyclist claimed a world title.

Born in 1878 and raised in Indianapolis, Taylor lived part of his young life with his friend’s wealthy parents, who gave him his first bicycle and helped tutor him. When they moved to Chicago, Taylor came home and, aged 12, found an unlikely form of work which would be the launchpad to a career he could never have imagined.

Owners of the Hay and Willits bike shop paid him $6 a week to perform tricks to attract customers. He did so dressed in military uniform, earning his nickname ‘Major’.

Taylor eventually moved on to a more established cycle shop in downtown Indianapolis, where he would meet cyclists such as Louis ‘Birdie’ Munger and double world sprint champion Arthur Zimmerman. It was the relationships he formed with these heroes of the track that helped him break into an exclusively white sport. Munger, in particular, saw his potential and trained him to win. 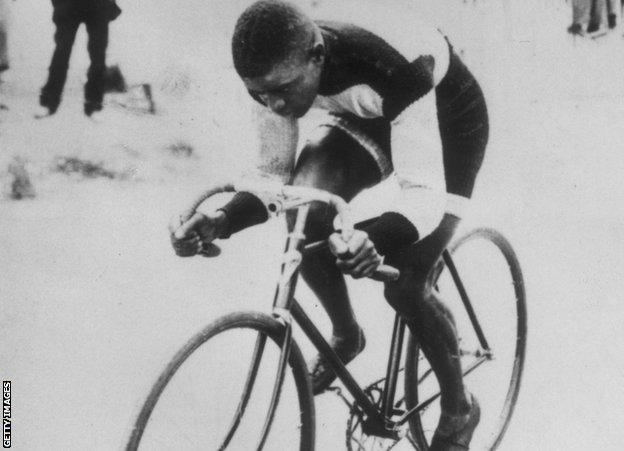 Taylor, pictured here circa 1900 – in 1899 he had become a world champion sprinter

And win he did. At 15, he broke an amateur one-mile track record. He was promptly disqualified and banned from the velodrome.

Taylor broke several more amateur records around this time, often in the shadow of threats from white competitors. He continued to excel in segregated races, and the records started to fall in national championships organised for black racers.

A move with Munger to the comparatively more racially tolerant Worcester, Massachusetts – also a cycling heartland of the era – made his transition into racing among white athletes a little easier.

He began to make his mark, often to the delight of much of the crowd, but to the chagrin of others. As seven world short distance records fell to Taylor across 1898 and 1899, even soon-to-be US president Theodore Roosevelt was following his every move.

For some, though, his talents were too much. Less than a year after announcing himself on the racing scene in New York, Taylor was wrestled to the floor and strangled unconscious by a competitor he beat into second place following a sprint race in Taunton, Massachusetts.

“After the riders had finished, WE Becker wheeled up behind Taylor and grabbed him by the shoulder,” wrote the News York Times. Its report continued: “[Taylor] was thrown to the ground, Becker choked him into a state of insensibility and the police were obliged to interfere. It was fully 15 minutes before he recovered consciousness, and the crowd were very threatening towards Becker.”

The crowd’s reaction that day was a huge swell of popularity that must have spurred Taylor on to silence those who tried to bring him down. Ice cubes and nails would be thrown under his tyres. Hotels and restaurants would refuse his business.

Dr Marlon Moncrieffe, author of the book Black Champions in Cycling says: “Taylor’s rise is a story of desire and determination through his display of human grace.

“He would take to the track, full of verve and power, breaking long-standing track speed records that had been set by champion white cyclists. While this was much to the delight of the majority white crowds, who saw the grace in Taylor’s efforts, it was to the disgust of the white racers. Taylor was warned that if he ever showed up to their meetings to cause them embarrassment, his life would be in danger.”

By the turn of the 20th Century, Taylor was racing and breaking records on the track and road in Europe and Australasia. In 1899 he won 22 races, including a famous victory in the one-mile world sprint to beat Tom Butler, making him the first black American world champion, and the second black world champion in any sport, after Canadian boxer George Dixon’s 1890 title.

His brilliance was impossible to ignore. But as a devout Christian, Taylor refused to race on Sundays, when many of the championships were held. He did not compete for another world title until right at the end of his career, in 1909.

He missed out on many race meetings in Europe for the same reason, but when he did take to the track he would shine. He won 40 out of 57 races in 1902, gaining a following in France.

Taylor originally retired in 1904 at the not-so-ripe-old age of 26, but then was tempted into a comeback in 1907 before eventually stopping three years later. By the time of his final race in 1910, he had made a lot of money – in today’s terms around $2m.

But poor business investments following his retirement and the break-up of his marriage saw him struggle. The sale of property helped pay off his debts. He died aged 53 in Chicago in 1932 from a heart attack with almost all his winnings gone.

The Great Depression may have had something to do with that, as it did his burial in a pauper’s grave. In 1948 he was exhumed and reburied with a more fitting tribute as epitaph: “World champion bicycle racer who came up the hard way without hatred in his heart, an honest, courageous and God-fearing, clean-living gentlemanly athlete. A credit to his race who always gave out his best. Gone but not forgotten.”

Taylor himself wrote in his autobiography, after he retired: “I felt I had my day, and a wonderful day it was too.

“I always played the game fairly and tried my hardest, although I was not always given a square deal, or anything like it.”

For what he achieved, in the context of when and how he achieved it, Taylor has to be a sporting great.

So why is he, as the Los Angeles Times put it 16 years ago, “one of the greatest sports stars no-one knows”?

Today, there is a cycling team that bears Taylor’s name dedicated to the development of non-white competitors. It has been a catalyst for nurturing talent such as Justin Williams – who has won races at national level in the United States – and his brother Corey.

In addition, American musician John Legend’s production company is filming ‘The Black Cyclone’external-link – a biopic whose title references another of Taylor’s nicknames. And a mural was recently unveiled in his home town of Indianapolis.

But given the cultural impact Taylor had beyond the velodrome in handing the baton to other black athletes across the 20th Century, many feel the credit he deserves is still lacking.

For Moncrieffe, Taylor’s legacy should today be “even more significant for cycling and learning in the wake of the huge Black Lives Matter anti-racism protests of 2020 across the world”.

He adds: “Perhaps his story is a reminder that the racial discrimination of the past still lives and breathes in the present in the dominant and exclusive white world of cycling?

“I hope this not to be true. I would want Taylor’s legacy as the fastest man on two wheels to remind us that desire, determination, friendship, and human grace collectively is the greatest force of power in the sport.”

The story of Marshall ‘Major’ Taylor – the black cycling pioneer

Fundamental Concept of Management and Administration