As she sits in state in her cosy Essex sitting room, issuing crisp instructions about electric blankets and hot water bottles and where, precisely, to place them, there is something undeniably regal about 94-year-old Jeannette Charles. And, also, extremely familiar.

The mouth, the nose, the jaw and that very distinctive philtrum (the bit between the mouth and nose), the immaculately coiffed white curls, beady eyes and bell-clear diction as we discuss the forthcoming Jubilee celebrations.

In fact, Jeannette looks so like our beloved Queen that it’s hard not to plunge deep into a curtsy, or ask after her appallingly behaved corgis and commiserate about Prince Andrew and Meghan. For 42 years, she reigned supreme as the first, (in her eyes) only, and longest-serving Queen Elizabeth lookalike. 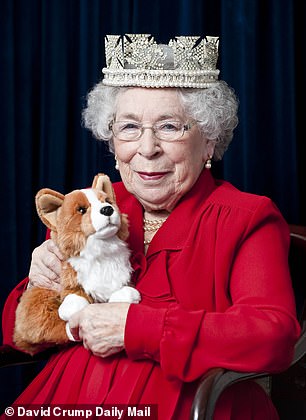 Jeannette Charles is retiring after decades impersonating the Queen all over

‘I am a Guinness Record holder for playing the Queen for the longest time,’ she says. ‘Far longer than that Helen Mirren.’

She travelled the world — ‘always first class and, oh, the hotels!’ — and appeared on chat shows both sides of the Atlantic: David Frost, The Late Show, The Russell Harty Show and so on.

She met everyone from Muhammad Ali (‘so joyful’) and Joanna Lumley (‘just lovely’) to Anne Robinson (‘rather harsh’) and Freddie Mercury, Dudley Moore, David Jason — the list goes on and on. She popped up in movies: The Naked Gun with Priscilla Presley and Leslie Nielsen, and in Austin Powers In Goldmember with Beyonce and Sir Michael Caine, where she mistook star Mike Myers for an electrician. ‘So nice, but such a very ordinary looking guy.’

She was forever appearing on Blue Peter (‘that was adorable’), The Two Ronnies and The Morecambe And Wise Show and opened fetes, schools, the grocery store in the next-door village and gave countless after-dinner speeches.

And all because, by a strange quirk of fate, she looked uncannily like our Queen. ‘At first, I was a bit embarrassed,’ she says. ‘Though there are worse people to look like, I suppose.

‘Because I have always loved the Queen. She is marvellous, incredible. An example to us all.’ 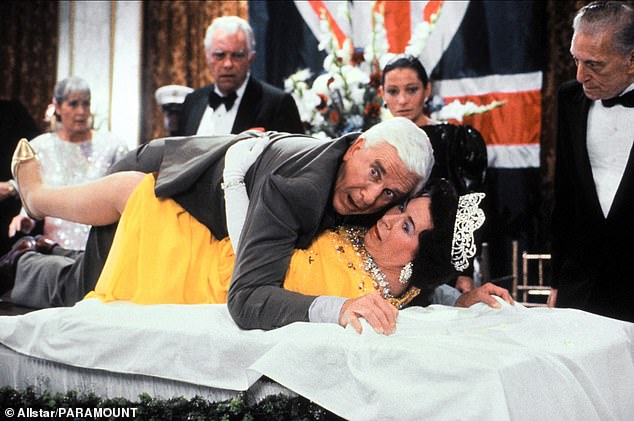 Mrs Charles even appeared in ‘The Naked Gun: From the Files of Police Squad (1988)’

Which is why, as a mark of respect, Jeannette has always adhered to very firm rules. For starters, she insisted it was made clear — whether in an advert, a film or an after-dinner speech — that she is not the real Queen. Secondly, she would never do anything that she considered disrespectful to Her Majesty.

So she turned down the chance to appear as ‘Miss January’ — dressed in black corsets and fishnets — in an American calendar. And it was a firm ‘no’ to the offer to pop up as a racy, regal centrefold in a British magazine.

She also gave Ali G — aka comedian Sacha Baron Cohen — a very frosty response when he asked if she would drop her knickers as she got out of a Rolls-Royce as part of a comedy sketch. ‘I mean how ridiculous,’ she snorts. ‘Fancy asking such a stupid question! No, no, no! I just walked off.’

Good for her. Though she was happy to whizz down a royal banqueting table on her back with Leslie Nielsen (‘such a lovely, lovely man’) straddling her in The Naked Gun.

‘Goodness what fun it was. And I loved Priscilla Presley — she invited me to her trailer for lunch and we became good friends,’ she says. ‘What a life!’ 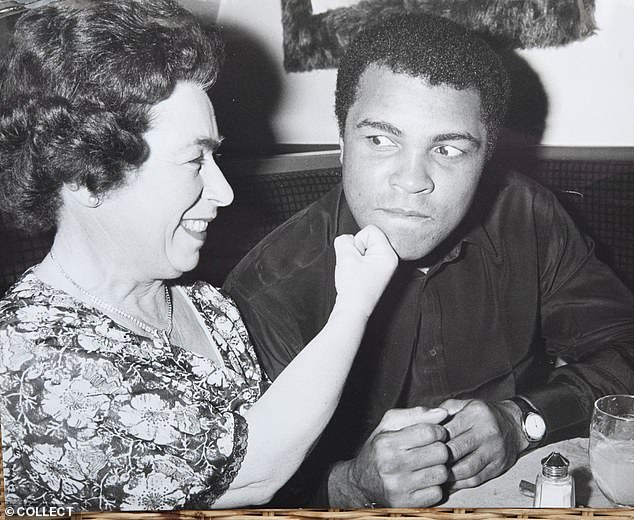 As a young girl growing up in London in the 1930s, Jeannette displayed no obvious similarity to the young princess. But, as a teenager, the likeness started shining through. Once, on holiday in Capri, a group of Italians became extremely overexcited, crying: ‘It’s Princess Elizabeth! It’s the Princess!’ Poor Jeannette would go puce.

The older she got, the more people commented. At her first job as a secretary, during her amateur dramatic days in Acton, West London, and even during a nannying job in Texas, where she met her late husband Kenneth, an oil worker.

She’d always dreamt of becoming an actress, but Ken’s job meant they were forever travelling. Then, along came three children and her dreams went on hold. Until 1971, that is. By then, Jeannette was 44 and little known beyond her friends, family and fellow members of the theatrical group in the leafy village near Chelmsford where they’d settled.

However, some people would do awkward double-takes in the street. Others would nudge one another, saying ‘Oi, is it . . ? No, it can’t be.’

Then, one day, she commissioned a painting of herself to cheer up Ken. And things rather blew up.

Because the artist, Jane Thornhill, was so pleased with the work that she submitted it to the Royal Academy. Mistaking it for a portrait of the actual Queen, they accepted it and immediately hung it in pride of place. Until, realising their mistake, they hastily took it back down again.

But the story was out. Our beloved Queen had a doppelganger! Suddenly, Jeannette’s phone was ringing off the hook with requests for photos, interviews and appearances. All of which, she says, presented a welcome diversion.

‘Ken was working away, the children were at boarding school. I had a cleaner and a gardener, everything I wanted, but I was bored. That’s why I did it,’ she says. ‘And also, it was sort of a relief to embrace it after all those years.’ 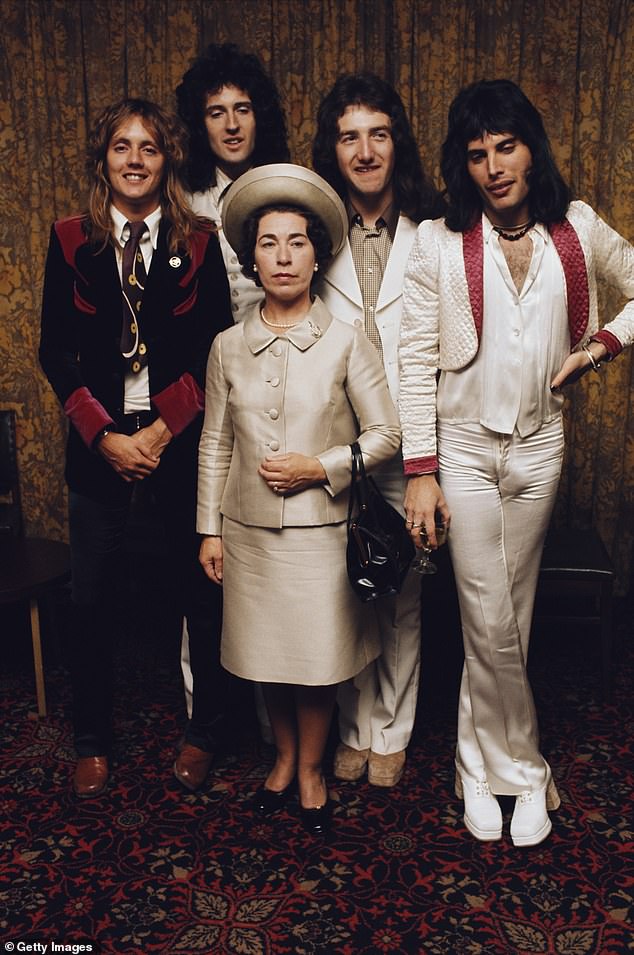 Next thing she knew, she was flying all around the world in her new regal role. Everywhere from Chile to Budapest, Hollywood to Holland.

‘I travelled all over the world and, oh, the different people I met and the respect for royalty was unbelievably proud-making. Apart from in Australia, where I thought they were a little bit disrespectful of me doing the Queen,’ she says.

Most people were nice, but not everyone. O.J. Simpson, for one. ‘Oh my God, he was so conceited,’ she says. ‘And so tall. He said to me, “Little lady, I earn more in a day than you’ll ever earn in a year.” And I thought, “You conceited oaf.” ’

Meanwhile, she took acting classes and studied the Queen’s annual address so she could perfect the voice. She gathered a very royal wardrobe and a selection of sensible handbags and shoes.

And she batted away suggestions by an over-excited genealogist who contacted her claiming to have traced a connection between Jeannette’s ancestors and the Royal Family. ‘I ignored it. I left it. I didn’t want to know,’ she says.

Instead, she embraced the fun side. The movie cameos, adverts for Pepsi and McDonald’s, the luxury travel and an unlikely friendship with Liberace in Las Vegas.

‘I was once told that, had it not been for me, the Queen would never have walked through the palace with Daniel Craig for that famous scene in the Olympics opening ceremony,’ she says. ‘You see, I paved the way. I made her human and allowed her to have fun.’

Golly, who told you, Jeannette — not the Queen herself? ‘I can’t say’ she says, looking all pink and pleased. ‘I can’t possibly say!’

Annoyingly, Jeannette’s third rule is that she will never, ever, discuss her personal relationship, if any, with the Queen — whether they’ve met, what contact they’ve had, if they’ve ever sat over a nice cup of tea and a shortbread biscuit and discussed all the countries they’ve visited in their parallel royal capacities.

When I ask, she just smiles secretively and says: ‘Oh no, my love, I can’t possibly talk about any of that.’

Of course, the trouble with looking so very like the Queen is that you can’t always turn it off. Once, at Selfridges, she was accosted by a woman convinced she was Her Majesty. ‘I had to tell her, “No, my dear. I’m really not, but it was lovely to meet you. God bless”, and I gave her my autograph.’

She was careful never to be rude, but sometimes it all became a bit much. ‘I didn’t like being mistaken for her — not in my own life,’ she says. ‘So I started disguising myself — wearing dark glasses. And dressing a bit differently.’ But still — and despite the fact that, at 4 ft 11 in, Jeannette was always shorter than Queen Elizabeth and with slightly heavier features — the likeness beamed through. So much so that, eventually, she had to introduce a fourth rule — never to be in the same place as the Queen.

Which is why, despite being invited, she has never been to a royal garden party.

‘I’d never want to cause confusion. If we were both there — imagine!’ Indeed. To be fair, their similarities are more than just physical.

They both love dogs — though Jeannette prefers rottweilers to corgis. Both adore holidaying in Scotland — ‘Oh, it’s delightful, I loved it. Why would you want to go abroad?’ Both had very happy marriages and both have embraced pretty much the same style for the past 70 years. ‘I like her look, I like how she dresses. She has always dressed to her age very well,’ says Jeannette. ‘But I don’t particularly like her hats. They’re too old-fashioned. A bit old hat. In this day and age, she could have a bit more fun with them.’

But, of course, she wore them, because as well as being great fun and a way to see the world, it was rather lucrative being Queen Elizabeth.

‘I did very well out of it, but I’m not an oligarch,’ she says. ‘But I’ve always had enough to pay my way and be generous.’

For Jeannette, it was a mad, crazy 42 years that came to an abrupt end in 2014 after someone drove into the back of her car and damaged her back, and she had to hang up her crown for good.

‘Do I miss it? Of course I do — it was marvellous,’ she says. ‘I still feel I’m on duty when I hear the national anthem.’

Happily, though, as she and the Queen have aged, today she feels more of a connection than ever. So she can’t bear the trouble Andrew and Meghan have caused for the Queen. ‘To go on Oprah — that was disgusting!’

She wept for the Queen at Prince Philip’s funeral. ‘When I saw her sitting alone — I have been through it all with my Ken.’

And today she understands more than most about the frustration of painful mobility problems.

‘It is tough being in your 90s. She and I both know that,’ she says. ‘My neighbour goes up and down stairs on her bottom — I expect the Queen has a bit more support, but she is still working.’

Because, of course, come the Jubilee, lucky Jeannette can watch it all on television from the comfort of her sofa, while the poor old Queen has to engage in all the pomp and ceremony.

‘I don’t know how she does it,’ says Jeannette. ‘I certainly couldn’t any more. She is incredible.’

So, finally, after imitating her royal heroine for so very many years, has Jeannette ever been a teeny bit envious? Or wanted to swap over properly — just for a day, even?

‘Oh no, no, no! That would never enter my mind,’ she says, looking horrified. ‘Look at the years she’s served us. For 70 years, focusing every day on her position.

‘She’s marvellous. But I would never want to swap, because I am just an ordinary person and she is, well, she is the Queen.’

How To Increase Your Online Traffic For Your Dental Practice