How Behind the Frame’s animation makes you feel at home – PlayStation.Blog

Most games you’ll find featured in Game of the Year lists revolve around fantasy, larger-than-life stakes, the far future, or distant past. These are places that want to transport players to completely different worlds, new experiences unlike anything you’ve ever had before. Behind the Frame: The Finest Scenery, which releases for the PlayStation 4 on June 2, has its sights set on a different fantasy – one in which you can sink into the delightful routines of everyday life.

I’m Buddy, the community manager for Akupara Games and I wanted to take a little time breaking down why that core experience of Behind the Frame’s gameplay is so important to us. In Behind the Frame, you play as a young artist trying to exhibit her art at a big time exhibition. And while the game itself focuses on a mystery that she’s trying to solve, most of the time you spend in Behind the Frame will be in her quaint, lived-in apartment studio.

Behind the Frame sports a number of animated cutscenes over the course of the game, which many players and critics have likened to the animation of Studio Ghibli, famous for films like Princess Mononoke and Spirited Away. Those films, as well as many like them from Japan, are some of Behind the Frame’s biggest inspirations. In particular, When Marnie Was There really helped orient Silver Lining Studios to the particular style of traditional animation they’d use in the game’s cutscenes. The bold earnest colors and crisp linework elevate the artist and her studio into something more beautiful.

For the gameplay, the goal has always been immersion. The developers at Silver Lining Studios wanted to get players oriented to the routine of that daily life. Waking up in the morning, fixing yourself coffee, cooking a quick breakfast, and putting on some music before you start painting for the day. Painting and solving the puzzles associated with it are the main gameplay mechanics of Behind the Frame, where the story is going to move forward and more of the mystery will reveal itself. But for players to really come to terms with Behind the Frame’s main character, they’ll need to see more of her than just what’s relevant to the plot. That comes from helping her cook some eggs and butter some toast.

For another example, my favorite detail is having the player play music from a cassette tape player. It isn’t just about clicking a button and having the music start. The player needs to methodically open the tape deck, pick up the tape, slot it in, close the deck, and hit the play button for a single note of music to come out. In game design, we have a term called “kinesthetics,” which describes the player’s sense of movement through a virtual space. In the same way that you can type on a keyboard without looking at your fingers because you have a sense for how the movement of your fingers will translate to the letters appearing on screen, players have a sense for how their virtual avatars move through virtual spaces. And just like a game can have good/bad mechanics, graphics or sound design, its kinesthetics can dramatically enhance the experience. I’m much more connected to the painter as a player because of the process of turning on her cassette tape than if I had done it through a simple button press or cutscene.

That same care to the kinesthetics also applies to other parts of the game’s animation. When players press play and successfully start playing music for their day, the instantaneous cut to the rolling cassette tape gives players a moment to appreciate adding music to the game world. In fact, all of the small routines in the painter’s apartment include that moment of appreciation, whether it’s watching the tape play or pouring coffee into a cup.

That attention to detail extends to the game’s painting animations as well. Silver Lining added special rigging for the painter’s arm, so that even if the player was painting with the brush (which is matched to the controller,) the arm fluidly followed the brushstrokes. Details were also added to how the paint from gameplay dissolved into the final presentation. While a player paints, drips from their brushstroke will start sliding down the canvas. Once they finish painting a section, the paint will smoothly transition to the cleaned-up final product. That progression helps establish a sense of time passing and care being taken in getting the details of the painting right. 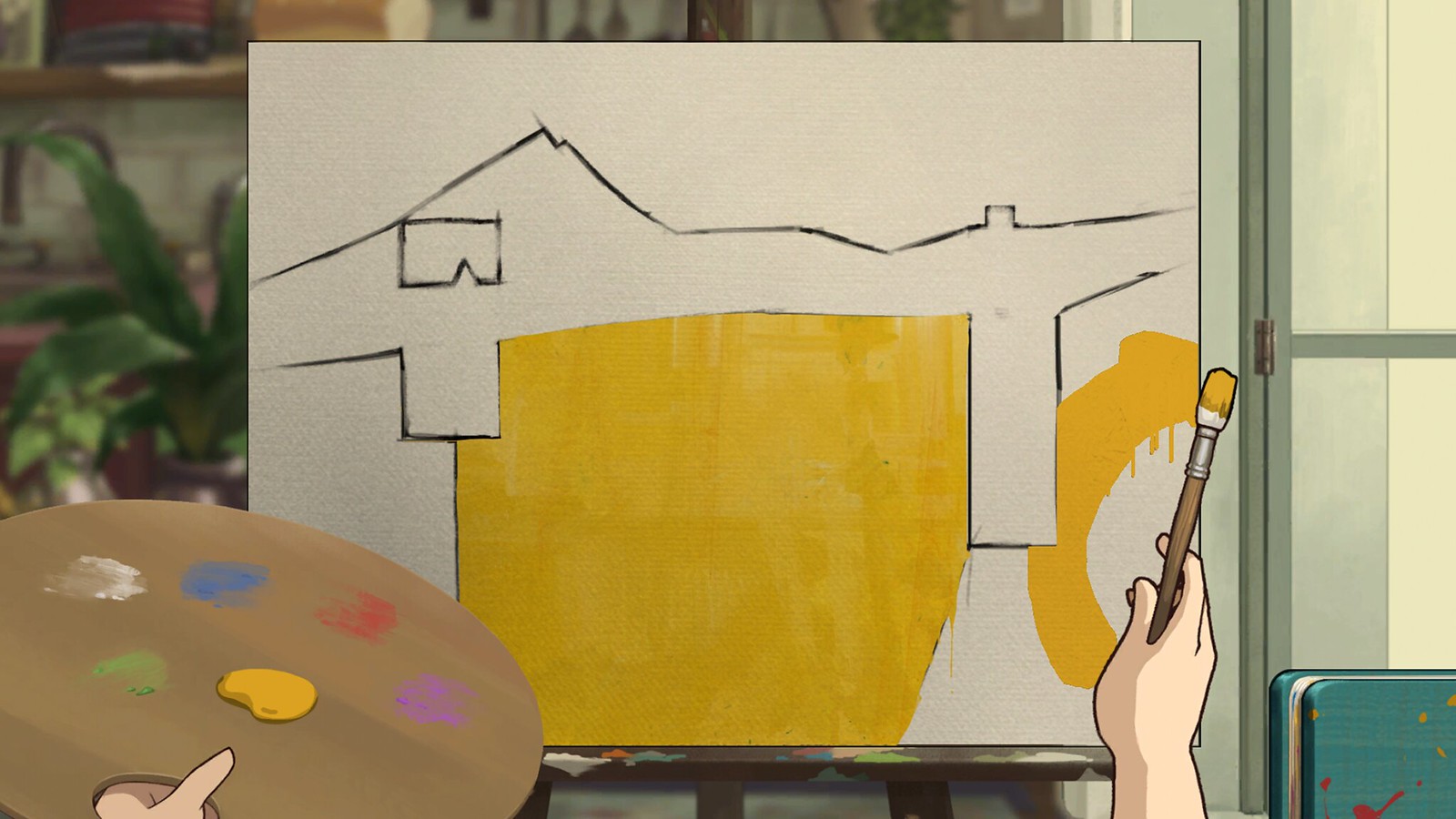 For the developers at Silver Lining Studios and us at Akupara Games, it’s those details that really sell the lived-in, immersive experience of being a young artist spending her days painting in her apartment. If you’d like to try painting a few masterpieces yourself, Behind the Frame: The Finest Scenery launches on PS4 June 2. We’re also releasing some brand new content to the game, a sidestory focused on another young painter, that same day! And I hope if you do pick up Behind the Frame, you keep an eye out for more choices like the ones above. This game is full of them!

Do they Bite? Are they Dangerous?