“It’s also a great opportunity,” the Yankees manager said, “for people we’re really excited about to step up and step into roles.”

For one series at least, that next-man-up mindset produced results. A night after Jose Trevino powered the Yankees to a come-from-behind victory, JP Sears and Miguel Andujar were the heroes in a series-clinching, 2-0 victory over the Orioles in front of 39,154 at the Stadium.

Sears, making his first major league start, tossed five shutout innings and Andujar drove in a run and contributed to another with a stolen base. The injury-ravaged bullpen — without Jonathan Loaisiga, Chad Green and Aroldis Chapman — delivered four sterling innings of work, led by Ron Marinaccio’s two shutout frames and a scoreless ninth from Clay Holmes, who earned his fifth save.

It enabled the best-in-baseball Yankees (31-13) to win their 11th series in 14 opportunities despite not having the services of Giancarlo Stanton, who was placed on the injured list with a calf strain before the game, DJ LeMahieu and Josh Donaldson.

JP Sears, who pitched five scoreless innings, picked up his first career win as a starter in the Yankees’ 2-0 win over the Orioles.Corey Sipkin

Wednesday, it was the woeful Orioles, but the schedule stiffens starting Thursday with a four-game series against the rival Rays in St. Petersburg, Fla. But the call-ups gave the Yankees and their fans a reason to smile after a stretch of bad luck over the past few days.

Sears navigated shaky command and a Gleyber Torres error to turn in a strong outing. He stranded six runners altogether, including two apiece in the first two frames. 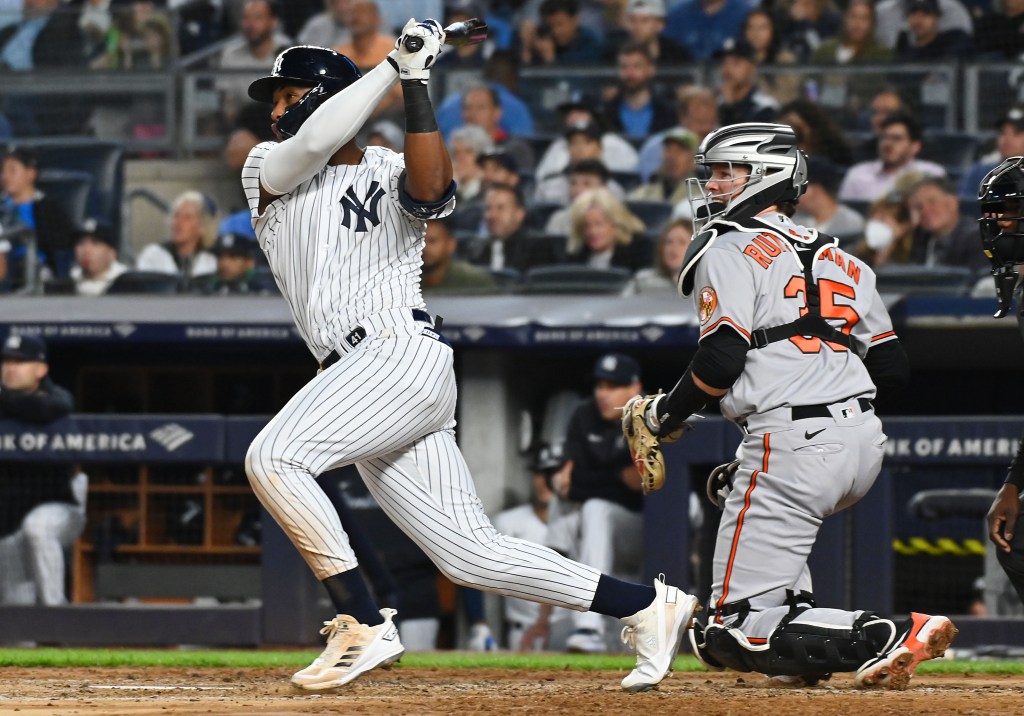 Miguel Andujar belts an RBI single in the fourth inning of the Yankees’ win. Robert Sabo

That’s when his best work came. He struck out two of the Orioles’ best hitters, Anthony Santander and Ryan Mountcastle, in the first inning after the first two hitters had reached base. In the second, he had two on with one out, but got out of it, fanning Cedric Mullins to close the frame. Only one of the final seven Orioles hitters to face Sears reached base, and the left-hander left on the right side of a 2-0 score.

The Yankees went ahead for good in the fourth, with Aaron Judge starting the rally by doubling down the left-field line. After a Torres single, Judge scored on Andujar’s single. Torres came around for the second run when catcher Adley Rutschman threw the ball into center field trying to stop Andujar from stealing second base.

That was enough for Sears and company, which didn’t allow the Orioles to advance a runner past second base until the ninth inning and held them without an extra-base hit.

The Benefits of Lymphatic Drainage After Plastic Surgery