Belgrade will not join the US-EU sanctions against Moscow, Serbian President Aleksandar Vucic said in Davos

Serbia will not join anti-Russian sanctions at this point, President Aleksandar Vucic said on Wednesday. In spite of the pressure from EU countries, Serbia is pursuing its own independent policy and intends to continue doing so, Vucic told the state broadcaster RTS in an interview at the World Economic Forum in Davos.

“Right now there is no such possibility,” Vucic told RTS when asked if Serbia could impose sanctions on Moscow. “I don’t know what life will bring and how everything will look” in the future, he added.

“We look out for our own interests,” Vucic said. “Who knows what kind of threats we may face, but as you see, it’s been 90 days and Serbia is standing by its policy, the only country in all of Europe. A small country with people small in numbers but very proud is following its own policy – not pro-Russian, not pro-Western, but its own,” he pointed out.

The US and its allies have pressured Belgrade to join their embargo on Russia over the conflict in Ukraine. The EU has argued Serbia, as an aspirant to join the bloc, must “harmonize” its policies and legislation with those of Brussels – something Vucic has so far refused to do, though he maintains his government’s strategic objective continues to be EU membership. 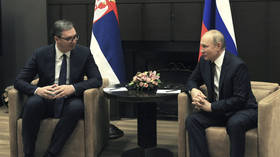 “Everyone’s holding it against me, calling me a black sheep,” he told RTS on Wednesday. He said he reacted to the EU’s demands by bringing up the block’s hypocrisy.

“You now talk about the territorial integrity of Ukraine, but you didn’t talk that way 23 years ago,” Vucic said, referring to the 1999 NATO war that resulted in the occupation of Serbia’s province of Kosovo.

“Today you talk about respecting the UN resolutions, but you forget UNSCR 1244 when it comes to us,” he added. The resolution, supporting the armistice that ended the 78-day war, also guaranteed Serbia’s sovereignty over Kosovo – which the US and its allies proceeded to ignore when they backed the renegade province’s declaration of independence in 2008.

“You have to understand Serbia is special, because only Serbia was bombed and attacked by NATO countries, many of which are EU members. So you have to keep that in mind when you talk to us,” Vucic told the EU leaders, according to his RTS interview.

In addition to political and diplomatic pressure, Serbia has faced a campaign of intimidation. Flights between Belgrade and Moscow have been disrupted by dozens of false bomb threats, which Vucic blamed on intelligence services of Ukraine and an unspecified EU country. False bomb threats have also targeted schools and shopping centers.

A New Tool for Finding Dark Matter Digs Up Nothing