In our humble opinion, the Draft system that American sporting leagues use sets our leagues apart from the rest of the world.

Thanks to the Draft, our leagues stay competitive, aren’t ruled by money, and talent from all over the country is celebrated. They also add an extra week of excitement to the off-season. If you have never closely tracked the NFL Draft then you are missing out.

Just think about it, by focusing on domestic talents, transfers are simply not as common as they are in Europe, Asia, or South Africa. They do happen, but only in specific cases when the foreign talent is significantly better than domestic. However, offering more chances to domestic talents offers a chance to create an exceptionally solid national team. It results in it dominating in practically all sports disciplines you can think of.

Sure, some disciplines are simply not as popular within the country. The clearest example that comes to mind is soccer. Sure, we can see that MLS has become quite a competitive league when it comes to competing against European or South American teams. If the current trend continues, we are confident that the leagues will become as good as some foreign ones are.

Have some opinions on how this year’s Draft will affect the league – check out the best NFL odds from Fanduel.com.

Every year, commentators say “this could be the best Draft year ever” – but when was the best year in the NFL Draft?

Note: We haven’t included any years within the last 15 years. The reason for this statement is quite obvious, it is simply early to comment on how successful they were.

2004 was an exceptional time in the history of NFL Drafts.

There are still many athletes from this year that haven’t retired – and those who have, have not finished their professional careers recently enough to be considered for evaluating their achievements. That will happen in the years to come. Still, that doesn’t mean that we shouldn’t include 2004 in this list of ours. It was truly a great time.

Those who follow these closely, know that three main names can be described as the most prominent names of this generation. We are talking about Eli Manning, Philip Rivers, and Ben Roethlisberger.

Manning is a Championship Winner in two occurrences and an MVP. The other two athletes have both retired the last year. According to many people, they are criminally underrated. NFL simply won’t be the same without these titans.

While they cannot be considered to be included among the best-known names of this sport, they have made a mark and we believe they are not appreciated enough.

The late and great Sean Taylor was also drafted this year. Cardinals star, Larry Fitzgerald, is also a 2004 Draftee.

Two great players weren’t decided upon in 2004 – Wes Welker and Jason Peters. After a couple of years, both of these athletes have become household names both in their teams and the league. No one can claim that this year had a huge amount of depth. We don’t believe that even the league itself can disagree with this statement. However, it was a star-studded year, full of huge characters that would go on to make a huge impact on the league.

For example, five names have joined the most important names of this sort after they ended their professional careers – Barry Sanders, Deion Sanders, and Steve Atwater.

Besides that, we can see that four of these names have found their place within the top five in 1989. Mandarich is the only Top 5 pick not to make it onto the list. It doesn’t mean Mandarich’s career wasn’t any less successful in the future. It was quite the opposite.

Troy Aikman certainly looked like the most promising talent within this generation – he won three different Championships. Also, he was named an MVP once, which really adds to the value of his career. Not many people have achieved that.

Still, it would be rude to ignore Barry Sanders who won over 1500 yards in five different seasons. So far, Urlacher is the only one from this year that was included alongside the best-known names in NFL. He will probably only be joined by Brady – if he ever retires… By the looks of it today, he is a person that has achieved significant results. He is 44, and there’s no sign of him stopping anytime soon.

However, Brady’s achievement has been so absolute in the last two decades that we have to include this year on this list of ours. Brady wasn’t even picked early. It was quite the opposite. He found himself in the 199th place. You will agree that this is exceptional information to hear.

Brady has won 18 divisional titles, been called up to the Pro Bowl 15 times, and named NFL MVP 3 times. 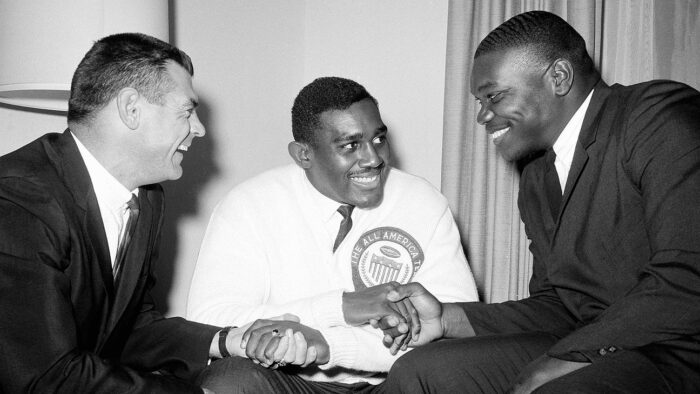 Taking place three years before the unification of the AFL and the NFL, this class had a massive impact on the popularity of the sport and how many of the places are played now. But 1964 is not special simply for this occurrence. It is remembered as a year when many household names started their professional livelihoods.

Well firstly, it boasts eleven different great names in the history of the sport. We are going to name just a couple of them, Bob Brown, Mel Renfro, Paul Krause, Roger Staubach, and Bill Parcells.

You may recognize an MVP Staubach from that list. He was a great Cowboys player who won the championship two times and was a member of the all-star game six different times.

Secondly, many players haven’t been awarded the status they deserved – notably Bill Munson, Jack Concannon, Pete Beathard, and Dave Parks. That’s why we believe they are not awarded accordingly is that they have managed to achieve significant results during their careers. Nevertheless, they are still remembered by older fans who still consider them as some of the best names in the sport.

Many people would put this group at number 1 here. 1989 offered it all – titles, records, skills, and depth, as well as some other superstars. Those who are well-informed about this sport know that this is certainly the most important year since it is the most fruitful when you compare it to all the other ones we’ve named here.

There’s a lot to talk about, so let’s start with this year’s household names. We will name just a couple of names, like Eric Dickerson, John Elway, and Jim Covert.

Elway is still the only player to throw over three thousand yards and cover more than two hundred yards in seven seasons. Also, he took his teams to the finals five different times and won it twice. After all the realizations he’s achieved to pull off, he started playing for three years in MLB. Therefore, we can all agree that this is a unique athlete that’s born once within a generation.

Another MVP winner from this year was Richard Dent. Like Elway, Dent won two Championships with his team. Without any doubt, he is one of the most impressive defensive ever, period. We’re sure that a lot of people will agree with this statement of ours, based on the career records he has achieved.

NFL is one of many proud elements of the US sport. Within its discipline, it is the most successful league, by far. As we’ve already stated, it leads to the strongest national team in the world. Drafts are the foundation of this whole concept. To understand this sport properly, understanding Drafts is an absolute must. Here, you can take a look at a couple of classes that are considered the most significant ones in history. You will find this insight quite interesting, we’re sure of that. Not just those who are interested in history, but also those who started to explore it recently.

‘Inflation is much too high’: Powell puts the hammer on price spikes

The Rock Dwayne Johnson Is a DC Comics Hero