American Justin Thomas staged a record-equalling fightback before beating Will Zalatoris in a play-off to win the US PGA Championship at Southern Hills.

Thomas trailed by seven at the start of the day but posted a three-under 67 to set the clubhouse target at five under.

Chile’s Mito Pereira looked set to win a first major title but double-bogeyed the 18th after hitting his tee shot into a creek to finish at four under.

Northern Ireland’s Rory McIlroy, who led the tournament after a five-under-par 65 on the opening day, closed with a 68 to finish eighth at two under in Oklahoma.

Thomas was one over after six holes on Sunday but had four birdies in his final 10 holes to fire his way to the top of the leaderboard, with Zalatoris hanging on to also finish on five under and capitalise on Pereira’s capitulation.

But it was the world number nine who prevailed in the three-hole shootout, making a decisive birdie on the 17th to claim his second major after also winning this event in 2017.

“It was a bizarre day,” said Thomas, who equalled John Mahaffey’s record of coming from seven behind to win the 1978 US PGA title, also in a play-off, at Oakmont.

“Bones [Thomas’ caddie] did an unbelievable job of just keeping me in the moment. We just tried to play the golf course for what it is..

“It’s funny, I was asked earlier in the week about what lead is safe, and I said, ‘no lead’. This place is so tough. But if you hit the fairways you can make birdies and I stayed so patient, I just couldn’t believe I found myself in a play-off.” 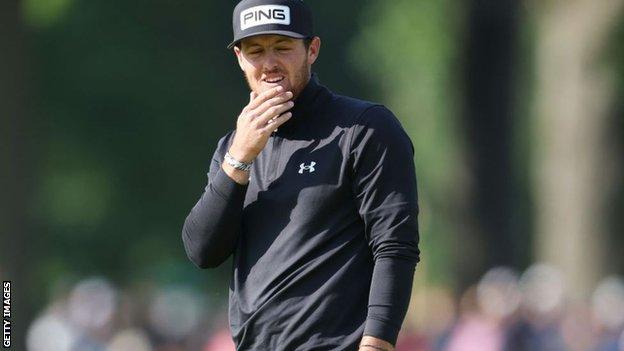 The nerve-shredding moments that will define this major for Pereira came on the 17th green and 18th tee.

A birdie putt that would have handed him a two-shot lead going down the last pulled up a couple of centimetres short before his drive a few moments later found water, ultimately sinking the world number one hundred’s hopes of becoming the first Chilean to win a major title.

As his ball was settling in the creek, Zalatoris was on the 18th green rolling in a gutsy par putt to match Thomas on five under, while the former champion immediately headed to the driving range in preparation for a play-off.

Pereira only made the switch from the PGA Tour’s feeder Korn Ferry Tour last summer and his best finish of 2022 before this event was a share of 13th at last month’s Texas Open, but he started the day with a three-stroke lead over Fitzpatrick on just his second major start.

Zalatoris, also a relative newcomer but now with five top-10s in eight major starts, had wiped that out by the time he reached the sixth tee, only to bogey the tricky par-three hole in bizarre circumstances.

An errant tee shot led to a 15-minute discussion with a rules official over where to drop his ball and he eventually made a superb up-and-down from a cart path.

From there it became a grind for the leaders, with Pereira just about keeping his nose in front despite Cameron Young briefly joining the lead and Thomas appearing on the horizon thanks to his bogey-free back nine.

That was until the par-four 18th, where Pereira’s unravelling led to a six that saw him miss out on the play-off, leaving Zalatoris and Thomas to scrap it out over three holes.

Both birdied the par-five 13th before Thomas drove the green at the 302-yard 17th and two-putted for a birdie that Zalatoris could not match, before holding his nerve with a par on the 18th to clinch his second Wanamaker Trophy.

“I’ve been knocking on the door in these majors for a little while and one’s going to come soon,” said Zalatoris. “To come up one short, it stings, but I know we’re going to get one soon.”

Fitzpatrick has an off day

Fitzpatrick, playing in the final pairing, began the day with genuine hope he could become the first Englishman to win this championship since Jim Barnes in 1919.

That was dampened when the 27-year-old bogeyed his opening hole and despite cancelling that out with a birdie at the fourth, he played himself out of the mix with further dropped shots at six, 10 and 11.

With those ahead of him toiling, Fitzpatrick greeted a birdie on the 15th with a huge fist pump in the knowledge he was once again two strokes off the lead, only for a bogey at 17 to kill off his chances as the Yorkshireman signed for a three-over 73 that took him to three under for the tournament.

“It’s tough to take,” said Fitzpatrick. “I just didn’t hit very well, wasn’t a good day. It’s disappointing knowing that you’re two shots outside of a play-off and you feel like you’ve got the game to make the play-off and go on to win.

“I shoot level par and I win it outright. If someone had said that before the round, I’d have fully prepared myself to do that. You know your target and get it around. It wasn’t the day that I wanted and it is what it is unfortunately.”

Compatriot Fleetwood also finished at three under and McIlroy was one further back but they left Southern Hills in very different moods – Fleetwood buoyant after five birdies in his final seven holes and saying he was “happy wherever I finish”, McIlroy rueing another missed opportunity.

McIlroy had ended round one with a one-stroke lead, bucking his recent trend in majors of starting slow, but the damage for the four-time major champion was done with a one-over 71 on Friday, followed by a 74 on Saturday.

When the world number seven holed four successive birdies from the second, it looked like he might be putting together a similar final round to the one he compiled at the Masters in April, but that run ended with a bogey at the par-three sixth – which he had double-bogeyed 24 hours earlier.

The 33-year-old failed to card another birdie in a two-under 68 and left the course without speaking to the media.

Fleetwood, meanwhile, made seven birdies in a final-day 67 that also included four straight bogeys through the turn to climb into a surprise share of fifth.

The Silence of the Right on Ukrainian Refugees

Monkeypox outbreaks: Here’s everything you need to know

4 Reasons why Poker Should Be Considered a Sport